It's officially winter, but don't expect a white Christmas

It’s official. Shanghai has entered winter! But don’t hold your breath for a white Christmas.

While the seasons are often set in stone in other countries — like back in New Zealand where Kiwis officially enter winter every year on June 1 — Shanghai takes her queues from Mother Nature before declaring that we need to pull out our down jackets and crank up the electric blankets.

That means that we don’t officially declare winter has entered the building until we endure five consecutive days with average temperatures below 10 degrees Celsius. Under these rules, Shanghai crawled into winter last Saturday, a wee bit later than her normal arrival around December 3.

But don’t get your hopes up for a white Christmas or snow-tipped trees to pose under for Instagram, because this winter in Shanghai will be a bit warmer than usual.

The local weather bureau has said we can expect average temperatures of 6 to 7 degrees, as opposed to the usual 6.1. On top of that, rainfall will be less this winter, too, at around 145 to 165 millimeters.

But as someone who enjoys the coldest months of the year — especially being able to wrap myself up in bed early during the week without feeling guilty — news of a warmer winter isn’t exactly welcome.

I remember my first winter in Shanghai, way back in 2012, saw one of the biggest snowstorms the city has had in a while. That definitely added to the charm of the city and my decision to move here, but I must admit I felt a little cheated when I realized snow blizzards aren’t exactly the norm. 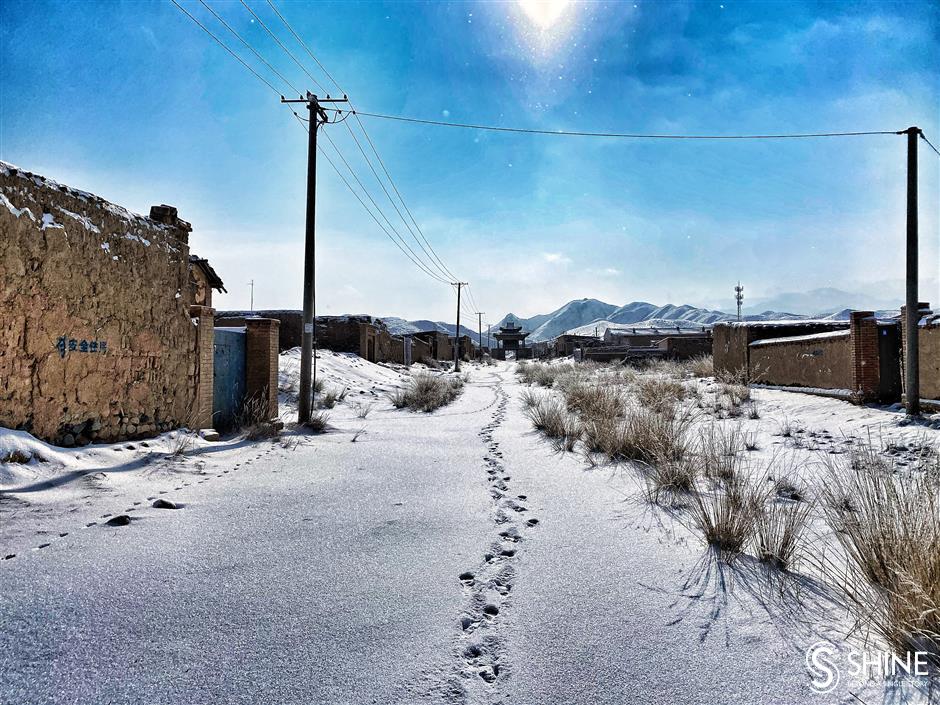 Luckily I got to spend about a month working in the snowy province of Gansu recently, enjoying hours each day trudging through snowy mountains in the middle of nowhere.

That brought with it all the things I love about the coldest season of the year, including eating noodles in small restaurants on snowy streets with steam belching out like some kind of beacon, carrying a thermos filled with piping hot tea, wrapping up in gloves, a scarf, and a long, thick down feather jacket, and getting into bed at night with the howl of snowy wind just outside my window.

But with the good comes the not-so-good, case in point: the dangers of snowy mountain roads, despite their beauty. While driving down a white mountain, one of our vans skidded off the road on black ice and rolled in a ditch. Thankfully no one was injured and we all helped get all of our luggage and gear out of the van before pushing it back upright.

On top of that, one of the crew got frostbite and had to smear medicine over his hands and wear rubber gloves for a few days until his skin was healed.

To be honest, I’m only listing these negatives of a white winter so you don’t feel like you’re missing out. Alas, there are some things you can do during Shanghai’s relatively warm winter months to pretend you’re somewhere a bit more, err, frosty.

- Carry a thermos with hot tea

The thermos is ubiquitous with winter in China’s northern regions. Carry a small one with loose leaf tea for convenience, or a large one that can last a whole day for more of the Beijing vibe.

- Turn off the heater and make hotpot

You can create the winter atmosphere at home easily by simply turning off your heater and making a spicy hotpot. You’ll get more winter points if your breath creates a puff of steam.

Popular in the north, heat stickers from the pharmacy are a must-have during winter. Stick a big one to your stomach or some smaller ones to the soles of your feet for that real winter vibe.

﻿
Special Reports
ADVERTISEMENT
It's officially winter, but don't expect a white Christmas
Shanghai's surprising answer to Martha Stewart and the gift of saying: 'Yes'
Thousands out of quarantine, but an uncertain winter looms just around the corner
Grief connects us all: Welcome to the club
Footbridge helps breathe new vitality into regional development
Saying no to the willing mute: Why it's never too late to learn Mandarin
Street cats in Shanghai: Why you should jog on
Your new columnist: the tightrope of being an attention-seeking prat
Immersive theater brings fresh life to historical dramas
Import expo showcases creative solutions from around world
EXPLORE SHINE