How to coin a street test of your morality 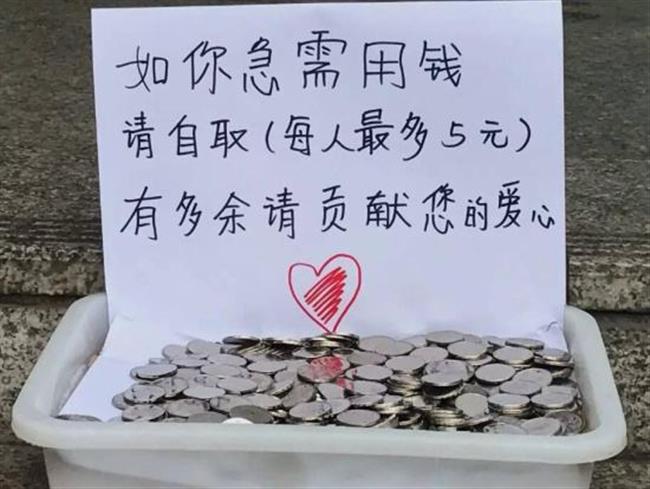 THE idea that money corrupts morals and taints civic virtue is hackneyed, but time and again we see attempts to challenge it on the assumption that the better angels within us will help resist the appeal of filthy lucre.

A recent attempt is a street test that has gone viral in China. Starting in mid-July, a mysterious carton filled with one-yuan coins began to appear in some of the busiest parts of cities across China.

Containing coins with roughly 500 yuan in value, these cartons bear signs that read, “if you are desperate for money, please feel free to take some , but no more than five pieces at a time. If you’d like to help those in need, even a one-yuan donation signifies genuine love.”

In what is apparently a publicity stunt, allegedly organized by a Guangzhou-based company, passersby of all ages were caught on a nearby hidden camera stopping to marvel at the sight, their faces bespeaking bewilderment, disbelief and amazement.

A few media reports have hailed the stunt as an “inspirational” effort because organizers keeping a daily tally of the coins reported a loss of only a dozen or none per day. Donations streamed in and occasionally even exceeded the number of coins removed from the pile.

For example, in Changzhou, a city in Jiangsu Province, organizers were surprised to recover some 524 yuan after a single-day campaign that started out with 500 coins up for grabs. The money was then reportedly spent on charity.

The coin test varies in forms and details across provinces, but a common finding is that most people restricted their take to three coins at a time. And no total theft was ever reported. Results of the tests quickly found their way into social media articles that crowed about the high moral standards many citizens appeared to hold themselves to.

Moral vanity was further flattered when the Chinese case was compared with a similar test in Britain, where some 300 pounds worth of 2-penny coins were deliberately dumped on a London path, which was finally swiped by a duo.

The point of this comparison is straightforward, that Chinese citizens are found to be on the same moral plane as Westerners — if not higher — something they have been trying painstakingly to confirm following a spate of public moral crises over recent years.

Notable examples include a toddler girl who was run over twice by cars and 18 passersby walked past without offering to help. The girl eventually died of her injuries.

And over the years we’ve learned to look away and bypass old people who fall out of fear that they might accuse a good Samaritan of causing their fall.

Amid growing outcry over the seemingly decaying social decorum and ethics, something is critically needed to reassure the public that values like decency and integrity still hold our society together. So we have seen dramatic charades where social workers are disguised as human traffickers attempting to lure children away from their custodians, at which point onlookers are expected or indeed, challenged to intervene.

More often than not, our guilty conscience is soothed by the sight of someone coming forward and intervening in our stead. The coin tests fall exactly into the category of feel-good programs meant to convince us of our moral scruples. I don’t want to be too mean-spirited, but I have every reason to doubt the value of these tests as an indicator of overall levels of social morality.

Suppose this test was held in a less public place, teeming with fewer people, at night perhaps, thus free from the prying gaze of onlookers; and if instead of coins, one-hundred yuan notes were offered, would the results still be the same?

We can only fathom if people will be making the morally consistent choice. I, for one, am not so optimistic. To begin with, in a different environment people could have acted quite differently.

Moreover, the coin test presupposes that one is immoral if he takes more coins than required and that those who take fewer are moral. This hardly stands to reason, though.

Is a man taking six coins to address desperate needs really morally inferior to a man pocketing two coins out of sheer greed? Obviously not.

Predicated on a false assumption, such tests are at best publicity stunts that prompt us to reflect a little deeper on, how, if possible, to measure so fickle a thing as morality. That one can either be moral or debased is a simplistic and coarse argument, but that is exactly what the test seems to be implying.

If my past translation of books on war and wartime atrocities is any guide, it has exposed me, sometimes rather painfully, to the horrendous extent of human capacity for committing evil. I subscribe to the view that extreme circumstances like war, catastrophes and other life-or-death situations are the ultimate crucible of humanity.

By contrast, street coin tests generate placebo effects, to be sure, but can a small coin shore up our confidence in human morality? The answer is plain for everyone to see.