Tennis world number one Novak Djokovic readied his legal guns Sunday for a battle to stay in Melbourne and defend his Australian Open title, arguing he has the all-clear because of a positive coronavirus test in December.

Djokovic's fight to overturn the shock cancellation of his visa and his ensuing detention in a notorious Melbourne immigration facility will culminate in a highly publicised online hearing in federal court on Monday.

The vaccine-sceptic Serbian star awaited the showdown holed up in the former Park Hotel, a five-storey facility that holds about 32 migrants trapped in Australia's hardline immigration system -- some for years.

Nobody is allowed in or out except staff.

More than 100 protesters, many of them migrant rights activists, gathered in a park opposite the hotel.

"Free, free, the refugees," the crowd chanted as dozens of police stood by.

Large banners were sprawled on the ground, reading: "Justice for refugees", and "We send love to you every day." Some men held inside the hotel could be seen watching through the detention centre windows.

With eight days to go before the January 17 start of the Australian Open, any delay could dash the 34-year-old's hopes of winning his 10th crown in Melbourne, and a record 21st Grand Slam title.

In an order released to the public Sunday, Judge Anthony Kelly said the case will go ahead as scheduled at 10:00 am Monday (2300 GMT Sunday), refusing a government request to adjourn until Wednesday.

Djokovic's lawyers submitted a 35-page document Saturday arguing his visa was wrongly cancelled and should be reinstated, allowing him to compete.

The team has argued that Djokovic's positive PCR test on December 16, 2021 means he meets the criteria for a vaccine exemption under the guidance of Australia's own immunisation advisory body.

Tennis Australia cleared him for an exemption to play in the tournament, after his application was approved by two independent medical panels, his lawyers said. 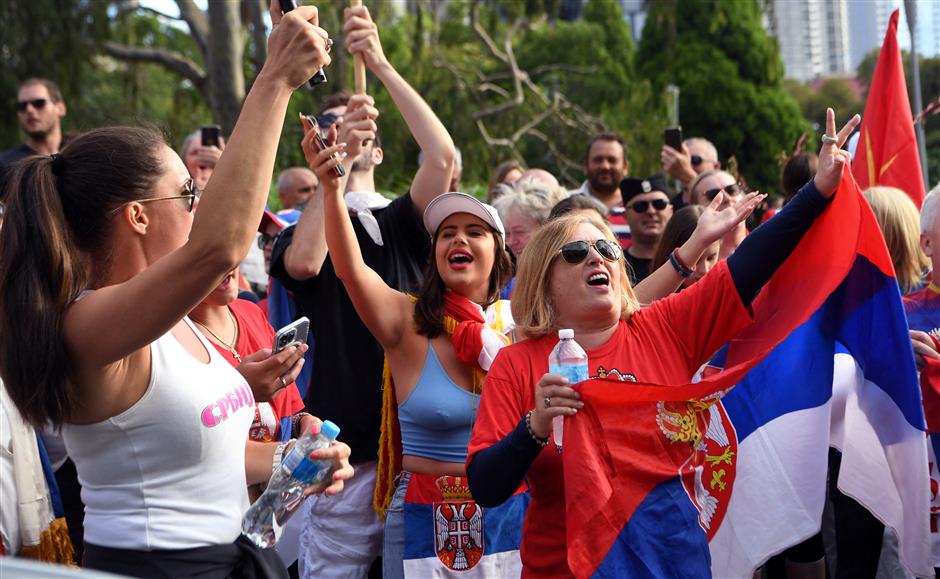 Fans of world tennis No. 1 Novak Djokovic, who is being held for alleged visa violations, protest outside an Australian refugee detention center in Melbourne on Saturday.

Australia's government, however, insists a recent coronavirus infection only counts as an exemption for residents, not for foreign nationals trying to enter the country.

Foreigners are still mostly banned from travel to Australia, and those granted entry must be fully vaccinated or have a medical exemption.

Despite Djokovic's claim of a positive test on December 16, pictures shared by the Belgrade tennis federation showed him at a young players' event in the city on December 17.

It reported that he had handed over cups and prizes to the best young players. No one was wearing a mask.

Djokovic had also attended another gathering on December 16, when the Serbian national postal service launched a series of stamps in his honour.

"Thank you to my generous country for this rare gift! I'm humbled!!," he said on Instagram at the time.

Djokovic had asked for time to rest and consult his lawyers but border agents successfully pressured him to allow them to take an immediate decision and cancel his visa, they said.

Since being moved into the Park Hotel detention centre, his pleas to be moved to another facility where he can train for the Australian Open have fallen on deaf ears, the lawyers said.

The centre holding him gained notoriety last year when a fire forced migrants to be evacuated, and maggots were allegedly found in the food.

Prime Minister Ana Brnabic said this weekend that Serbia was fully behind the player and she had held "constructive talks" with Australian Foreign Minister Marise Payne.

"We managed that he gets gluten-free food, exercise equipment, a laptop," she told Serbia's Pink television.

In an internal video leaked Saturday, Tennis Australia chief Craig Tiley said his organisation had done "everything they possibly could".

"There is a lot... of blaming going on but I can assure you our team has done an unbelievable job," he said in the footage published by the Sunday Herald Sun newspaper.

A second tennis player who was headed to the Australian Open – Czech doubles specialist Renata Voracova – had her visa was cancelled after initially being allowed into the country, her government has confirmed.

She flew out of Australia on Saturday night, an Australian government source said, after being held in the same Melbourne centre as Djokovic.

She described the experience to Czech media as being "a bit like in prison".

As much of Australia tightened restrictions to battle a wave of infections fuelled by the Omicron virus variant, the state of Victoria – of which Melbourne is the capital – reported 44,155 cases Sunday.

The federal judge hearing Djokovic's case warned his lawyers in a hearing Thursday that justice would move at its own pace through all necessary appeals.

"The tail won't be wagging the dog here," he said.