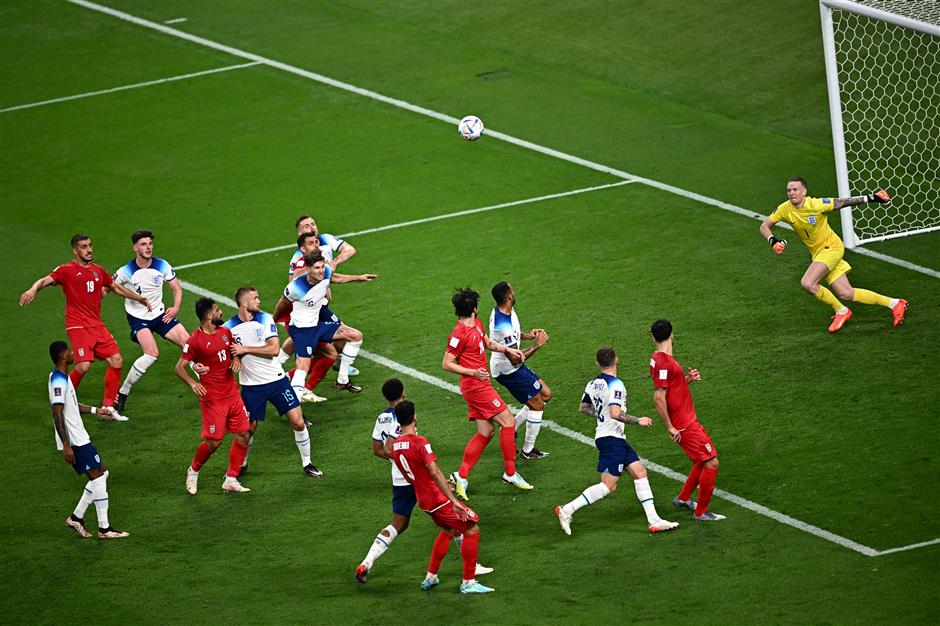 England's goalkeeper Jordan Pickford runs for the ball during the Qatar 2022 World Cup Group B football match between England and Iran at the Khalifa International Stadium in Doha on November 21, 2022.

England put pre-tournament doubts behind them on Monday when they kicked off their World Cup campaign with a 6-2 win against Iran that equals their second-biggest-ever win in the competition.

Gareth Southgate's side had gone into the game without a win in six games and question marks over whether the coach would have three or four at the back.

In the end, Southgate kept faith with the criticized defender, Harry Maguire and the Manchester United player partnered with John Stones in the heart of the defense, with Bukayo Saka preferred to Phil Foden on the right of the England midfield.

They turned out to be correct decisions as Maguire had a solid display and helped set up Saka for England's second goal of the game.

With Iran boss Carlos Queiroz opting to play three central defenders and leave Porto's Mehdi Taremi as a loan striker, England's full-backs Luke Shaw and Kieron Trippier looked to press forward from the start, with Trippier forcing a corner, from which it looked as if Maguire was wrestled to the ground, although the VAR didn't intervene.

A cross from Kane had Saka and Maguire both stretching for a touch as Iran keeper Alireza Beiranvand collided badly with defender Majid Hosseini and after a long stoppage, the keeper was eventually replaced by Seyed Hossein.

The delay of over 10 minutes briefly broke England's rhythm, but with Mason Mount, Saka, Jude Bellingham and Raheem Sterling all offering pace and mobility ahead of midfield lynchpin, Declan Rice, the first goal wasn't long in coming.

Most of England's attacks had been down the right, but it was a cross from left back, Luke Shaw that picked put Bellingham, who drifted into the area to head into the far corner.

Saka volleyed home the second in the 43rd minute after Maguire, who had earlier headed against the bar, outjumped two defenders to set him up and in with England running rampant, Sterling added a third in the first of 14 minutes of injury time after a great combination between Bellingham and Kane.

Sake scored his second of the game in the 62nd minute after linking with Sterling and drifting across the front of the area, before stroking a left-foot effort into the corner of the net after a slight deflection.

Mehdi Taremi scored for Iran in the 67th minute, getting behind the defense to power in a shot off the underside of the bar, moments before Maguire had to leave the pitch after apparently feeling dizzy.

Southgate rang the changes and Marcos Rashford added England's fifth barely a minute after getting into the action and fellow substitutes, Callum Wilson and Jack Grealish then combined for Grealish to net a sixth for England.

The VAR then awarded Iran a penalty for a slight shirt pull and Taremi scored to make it 6-2 with the last kick of the game.