A top-level data business summit is held at the Expo Center in Shanghai on Friday, with a number of international cooperation and agreements reached.

The Shanghai Data Exchange is speeding up development with a mature ecosystem and global influence, according to participants at the Global Data Ecosystem Conference 2022 on Friday.

A number of data business initiatives and agreements with international institutions and companies were released during the conference. It marked the Shanghai Data Exchange's position upgrade from a city-level organization to an international exchange, with integration into the global data factor market.

A Shanghai Initiative for Global Data Exchange Partnership was released during the conference, regarded as the latest "Shanghai voice" on global cooperation in the digital economy. The initiative was issued by 15 international organizations from the United Kingdom, Singapore, China's national industry associations, and the Shanghai Data Exchange.

The exchange also signed an international data business strategy memorandum with global firms, such as Amazon AWS, Dun & Bradstreet, KPMG and OCEAN TOMO. They will speed up the joint research of data development, data trading and data business ecology, internationally.

A Shanghai and Singapore Data Ecosystem Cooperation agreement was also signed during the conference.

Totally 200 speakers, 500-plus data business firms, and over 10,000 people attended the conference, including executives from the Industrial and Commercial Bank of China, State Grid, China Mobile, Huawei, Alibaba, Amazon, IBM and PwC. 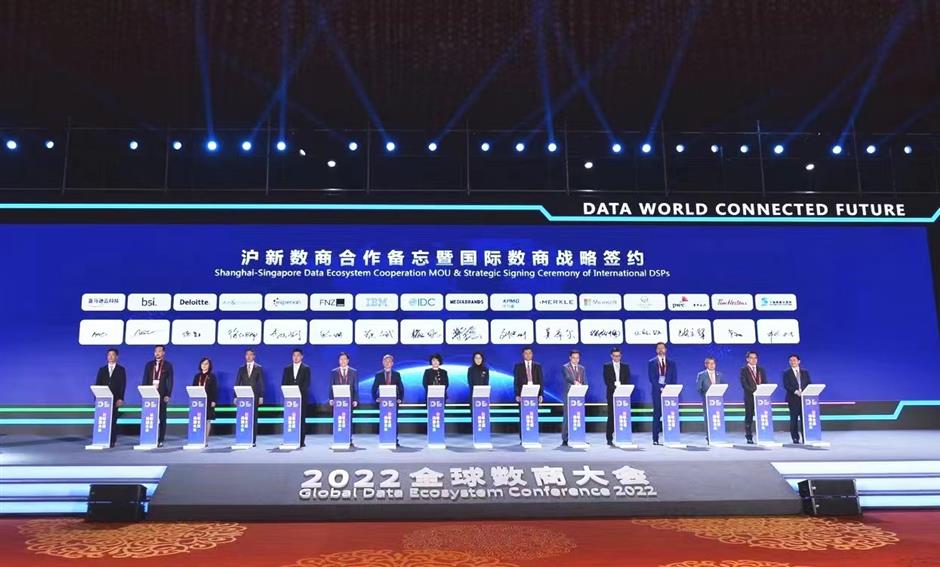 A Shanghai and Singapore data business cooperation is signed at the conference.

A data business industry association, the first of its kind nationwide, was founded at the conference. More policies and measures to support the data ecosystem are going to be released in the Pudong New Area.

In addition to the opening ceremony, the conference held a data trade festival, and over 20 sub-forums on Friday. It was also the first anniversary of the local exchange.

Since its debut, the Shanghai Data Exchange has attracted over 800 traders with a total transaction value of about 100 million yuan (US$14 million). More than 500 firms have signed up to use its services.

The data exchange opened with many nationwide "firsts" for its data trade ecosystem, smart transaction system, and digital certificate. It's designed to improve data use and management, and connect "isolated data islands" to boost Shanghai's digital hub construction.

It deals with data transactions, data asset evaluations, data security, and other sectors to build a complete industry ecosystem in Shanghai.