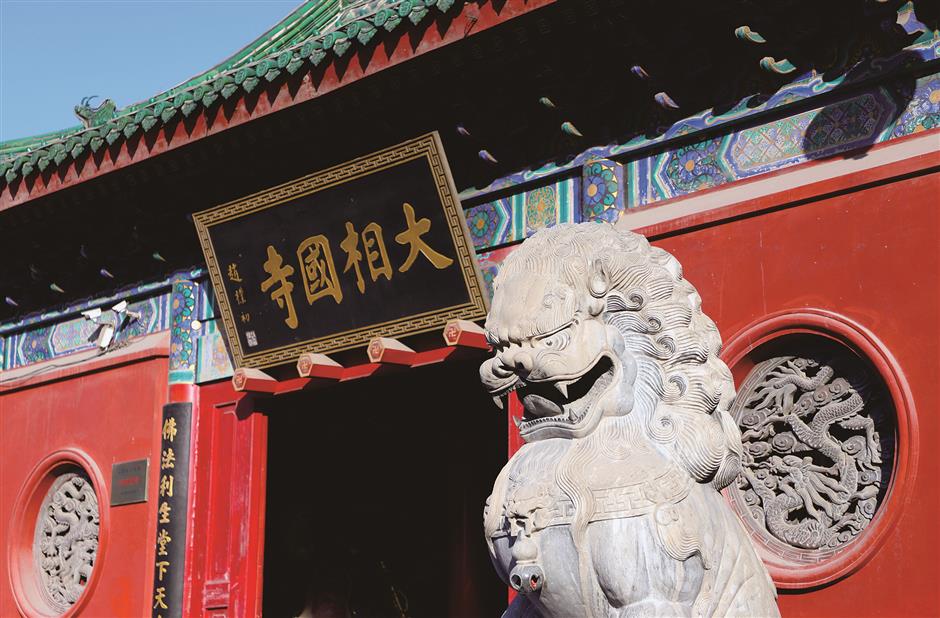 Daxiangguo Temple in Kaifeng, Henan Province, complies strictly to the highest standards of a Buddhist shrine.

As one of the top 10 Buddhist temples in China, Daxiangguo Temple in Kaifeng, Henan Province, complies strictly to the highest standards of a Buddhist shrine.

The Northern Song Dynasty (960-1127) witnessed the temple’s heyday. As the biggest Buddhist shrine, in the then capital of Kaifeng, the temple was renovated and expanded by several emperors to boast 64 magnificent Buddha halls, covering an area of 36 hectares.

When entering the front gate, visitors are dazzled by the Bell Tower and the Drum Tower. For centuries, monks observed their routine schedule to wake up to the morning bell and then retire at the end of a day to the night drums.

The bronze bell, hung high in the tower today, is a relic from the Qing Dynasty (1644-1911). The bell is 5 tons in weight, 1.8 meters in diameter and 2.23 meters tall and when it is struck every night it gives off a melodious sound. Especially in winter, when covered with a thin layer of frost or ice, the bell chimes even clearer in the air.

The Hall of Four Heavenly Kings (Tianwang Hall) is a place to worship Maitreya Buddha, known as the successor of Sakyamuni, founder of Buddhism. With a smiling face, Maitreya is also called the “welcoming Buddha,” who always waves to pious followers. There is a couplet inscribed on both sides of the smiley Buddha which is enlightening.

It says, “The big belly can tolerate any hardship in the world, while the smiling face always laughs at the ridiculous people.”

The four heavenly kings, standing on two sides, are safeguards of the four directions they point to. The instruments they hold, the sword, the pipa (a four-stringed Chinese lute), the green umbrella and the silver snake, work together to harness the wind and the rain for a bumper harvest — the biggest wish for an agricultural country in ancient times. Behind the Maitreya is a statue of a solemn-looking general, Wei Tuo, the protector in Buddhism.

It’s said Wei brought back sariras of Sakyamuni after they were stolen by the devils when the Buddha was in Nirvana. Thus, the general was also worshiped as a Buddha in the temple.

The Great Buddha Hall is the main structure, which stands alone and doesn’t connect with any other buildings. With carved lions on its posts, the 13-meter-tall hall is home to “the Trikala Buddhas,” also known as the Buddha Sambo — a combination of the Medicine Buddha, Sakyamuni and Amitabha. The three of them work together to remove illness, fulfill people’s wishes and invite followers to Western Paradise. 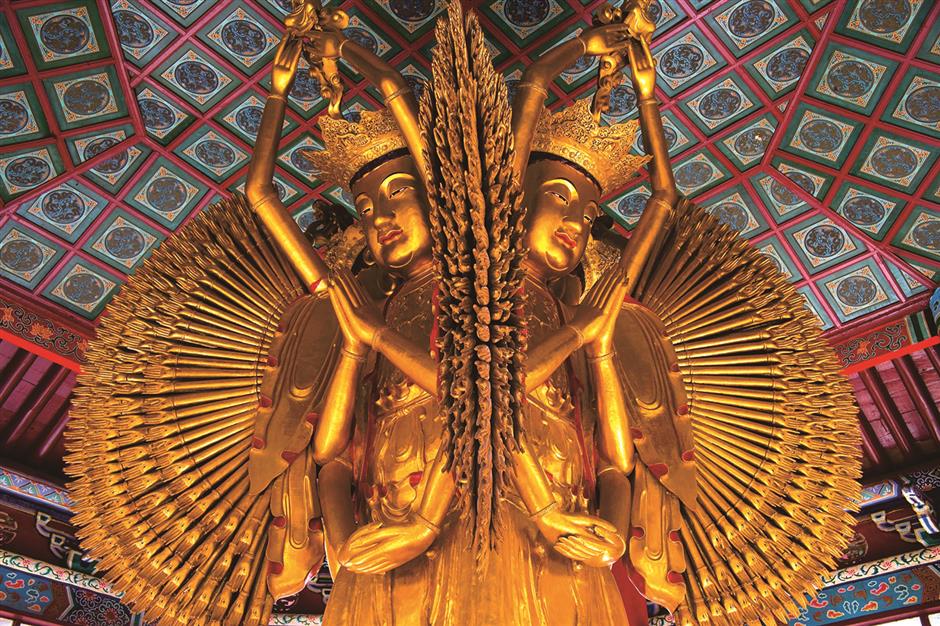 The 3-meter-high statue of Guanyin Bodhisattva is displayed in the center of the octagon-shaped Arhat Hall.

The third hall on the axis is the octagon-shaped Arhat Hall. It is made of colored glaze, which is rare in other Chinese Buddhist temples.

In the center of the courtyard there is a 3-meter-high statue of Guanyin Bodhisattva with 1,000 hands and 1,000 eyes on all four sides, each side having six big hands and three or four layers of small hands. Every hand holds an eye in the palm, 1,048 eyes in total.

There is a myth about this Bodhisattva statue. A king was severely ill, and a traveling monk gave him a prescription, which needed an eye and a hand of the king’s family member. His youngest daughter stepped out and cut off her arm and pulled out an eye without hesitation.

On hearing the story, Buddha was greatly moved and said, “This is true filial piety. I’m going to put the arm and eye back on the princess.”

Thus the image of the thousand-hand Guanyin appeared to educate people on how to be good and kind.