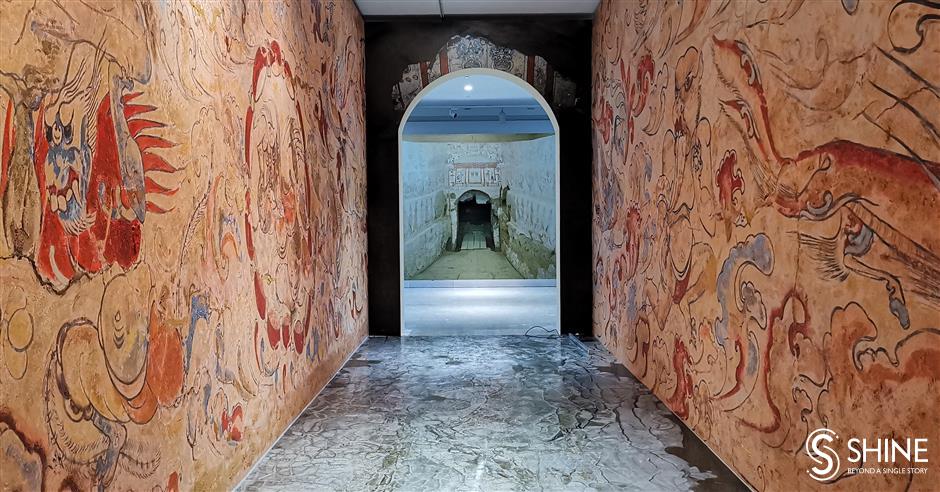 The wall paintings are reproductions of the fresco from Jiuyuangang Tomb in Xinzhou, north China’s Shanxi Province. It was found in a Southern and Northern Dynasties (AD 420-581) tomb. It depicts immortals, mythical beasts and plants from “Shan Hai Jing.”

“The Classic of Mountains and Seas,” also known as “Shan Hai Jing,” is a fabulous geographical and cultural account of pre-Qin Dynasty (221-206 BC), as well as a compendium of mythical beasts.

Throughout history, tales were derived from “Shan Hai Jing,” and these were gradually developed into larger systems of myth and legend.

Even today, the book has influenced many popular Chinese TV shows and movies, such as “Monster Hunt,” “The Journey of Flower” and “Once Upon A Time.”

Zhejiang Art Museum is currently hosting an exhibition of works inspired by this classic text, with contributions from 50 artists.

The exhibition is divided into three sections — Hongmeng, Taotie and Wumei which are named after stories from “Shan Hai Jing.” 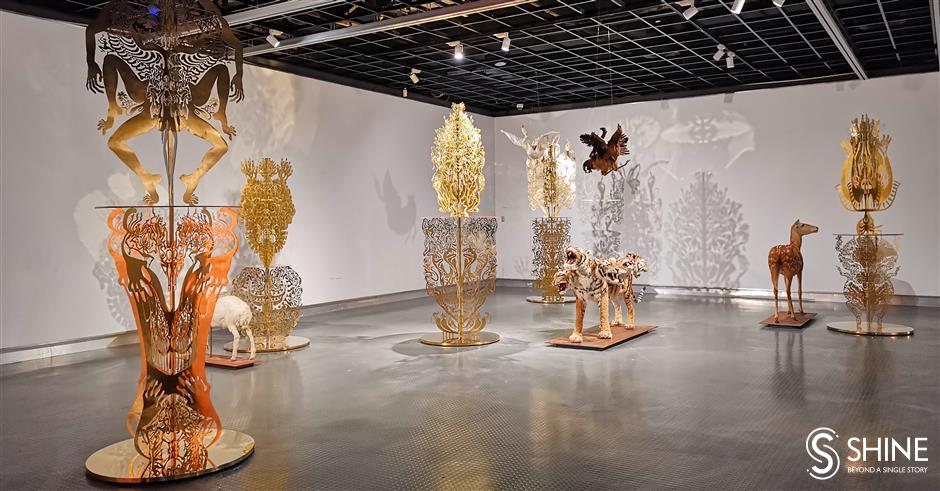 “Forest of Daydream” by Wu Jian’an

According to the book, the primordial universe was in chaos and uncertainty as heaven and earth blended together. All things were in a state of shapeless blurring. This era was called hongmeng (鸿蒙) when the world longed for harmony.

In this section, Liang Shaoji displays an installation work entitled “Drunk Sun.” Silk, wood, metal, glass, ceramics and wine were used to present the chaos of the primordial universe where the sun and earth were intoxicated and twisted together.

Li Hongbo uses colorful paper to sculpt “Fairytale World,” imaging heaven and the earth starting to separate as the world comes into being.

Shan Hai Jing is not a narrative, as the text mainly offers detailed descriptions of mountains, seas and wilderness. There are also descriptions of medicines, animals and geological features.

The second section, Taotie, mainly showcases works inspired by beasts and geological features. Taotie (饕餮) is described as a dragon with a pair of raised eyes and no lower jaw. It is one of the “four evil creatures of the world” in “Shan Hai Jing,” representing greed. It is commonly engraved on bronze and jade vessels.

Ma Hongfa created the work “Excavation Pit 1 of Shan Hai Jing” where part of a beast’s skeleton is exposed from underground. In the book, some creatures died in a prehistoric flood. Ma imagines a scene where scientists successfully excavate this beast.

The last section, Wumei, refers to a state of awareness where humans find themselves in a blissful wonderland where time and space are no longer fixed, but both body and spirit are endlessly extended.

“Shan Hai Jing” recorded more than 100 realms, 550 mountains and 300 rivers, along with geographic and cultural information from nearby regions. Ancient people tried to find paradise in these recorded places and then created a series of legends. 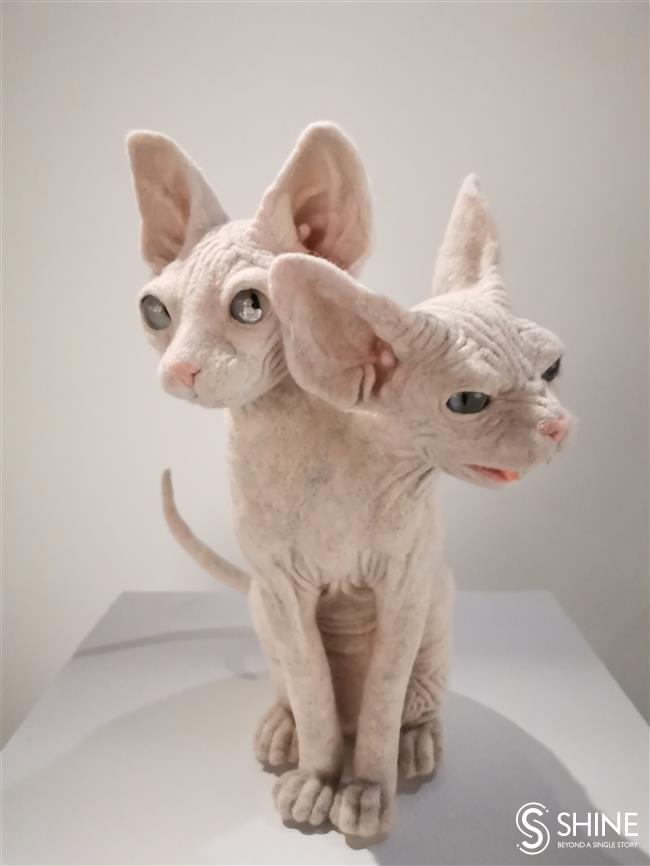 “Metamorphosis of the Cat” by Yin Yue

In addition to these three sections, the exhibition also replicates the fresco from Jiuyuangang Tomb in Xinzhou, north China’s Shanxi Province.

The fresco was found in a Southern and Northern Dynasties (AD 420-581) tomb. It depicts immortals, mythical beasts and plants from Shan Hai Jing.

Chinese people started to explore the universe during the pre-Qin Dynasty, as testified by stories from the book. In modern times, the exploration continues.

The giant dish is being built on a naturally formed bowl-like valley, hung over the ground supported by thousands of steel pillars and cables.