Sacred Buddhist temple a place of worship, charity and legends

Hongluo (Red Snail) Temple on the Hongluo Mountain, about 55 kilometers away from downtown Beijing, has been worshipped for centuries as the capital city’s most efficacious place by those praying for true love and happy marriage.

In the west of the temple there is a spring, which legend says used to be home to a couple of giant red snails. They hid by day and came out at night.

When the mist covered the mountain forest at dusk, the snails would spit out bright red flames to illuminate the whole mountain, which could be seen 100 miles away. Thus the temple and the mountain earned their name as “Red Snail.”

After their death, the couple was buried in the temple and locals built two pagodas to commemorate the mythical creatures. 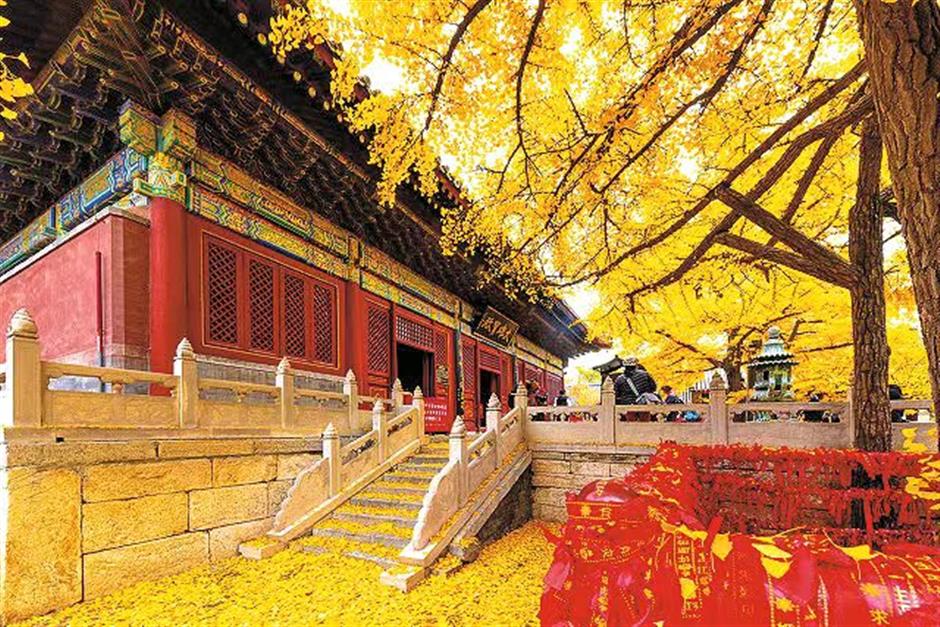 Hongluo Temple has been a sacred place of Buddhism for centuries.

After the founding of the People’s Republic of China in 1949, the place was used as a college for teachers.

The renovation and preservation project started after the school was relocated elsewhere in the early 1990s. Today the temple is a holy place for Buddhist pilgrimages.

Two ancient pagoda trees, around 2,000 years old, stand upright on either side of the front gate, like two soldiers guarding the temple.

The front hall is the shrine for Maitreya Buddha, protected by four heavenly kings. The main hall, or the Hall of the Great Buddha, features delicate carvings on bold red doors and window frames.

Sakyamuni sits in the middle, with a golden bird on top of his head. Waiting either side of him is Maitreya (Buddha of Future) and Bhaishajyaguru (Buddha of Medicine). Eighteen arhats with varied postures are the guardians of the three Buddhas.

The back hall is a meditation room for the monks to read and chant sutras.

A pergola, clad in purple wisterias, supported by 30 wooden posts, links the main and the back halls. The flowery sunshade, covering about 300 square meters, offers a cooling, refreshing open space in the summer.

As the birthplace of north China’s Buddhist culture, Hongluo Temple has been a sacred place of Buddhism for centuries through a series of successive dynasties, and it also functioned as a training school to educate abbots and master monks from not only China, but also Japan and Southeast Asian countries.

In order to accommodate the visiting monks, a group of small monasteries were constructed in the valley to the west of the temple.

During the reign of Jiaqing (1796-1820), Master Jixing, the then abbot of the temple, rented the lands to the neighboring farmers. The money he collected was used to provide free meals for poor people and take care of orphans. He even set up a hospital and drug store for the poor and deprived.

The temple had a big face-lift in the Qing Dynasty when it became a spiritual getaway for the royal family.

In 1694 when Emperor Kangxi came to worship, a green lush bamboo forest in front of the temple amazed him. The emperor ordered to protect it, and today, after three centuries, the forest boasts more than 1 million bamboo trees, a must-see site for visitors.

In the late Qing Dynasty, Empress Dowager Cixi also marveled at the bamboo forest and the wisteria pergola during her visit to the temple. She climbed to the top of the nearby Qinglong Mountain to have a bird’s-eye view of the whole compound.

Before her departure, she wrote down two characters “Fu” (fortune) and “Shou” (longevity), hoping her dynasty would be blessed and long-lived. The inscriptions today are hung high in the eastern guest hall.

The empress also granted a lotus lamp to the temple, which is on display in the main hall, just in front of the statue of Sakyamuni.