The opera “Baihua’s Sword” is about love and betrayal.

During the Song Dynasty (960-1279), Fang La leads a rebellion to overturn the central government. His sister Fang Baihua, 20, is a young general good at archery, swordplay and horse riding. Within several months, her troops conquer eight provinces.

At a birthday party for Baihua, her brother gives her a treasured sword. Among the soldiers at the feast is the spy Jiang Liuyun, assigned by the Song army to get military information.

During the night, Jiang sneaks into a secret meeting room to steal a military map. He runs into Baihua’s maid.

The encounter becomes an unexpected reunion when the maid recognizes the spy as her long-lost brother. He persuades her to help the Song government.

When Baihua returns to camp and is changing her clothes in front of a mirror, she spots a man hiding behind her. She pulls out her birthday sword, and a fierce fight ensues. The maid comes to stop the fight, calling a “misunderstanding.”

The sister and brother then proceed to deceive Baihua with sweet talk and flattery. As a young woman craving romance and enamored of Jiang, Baihua gifts him her treasured sword as a love token. 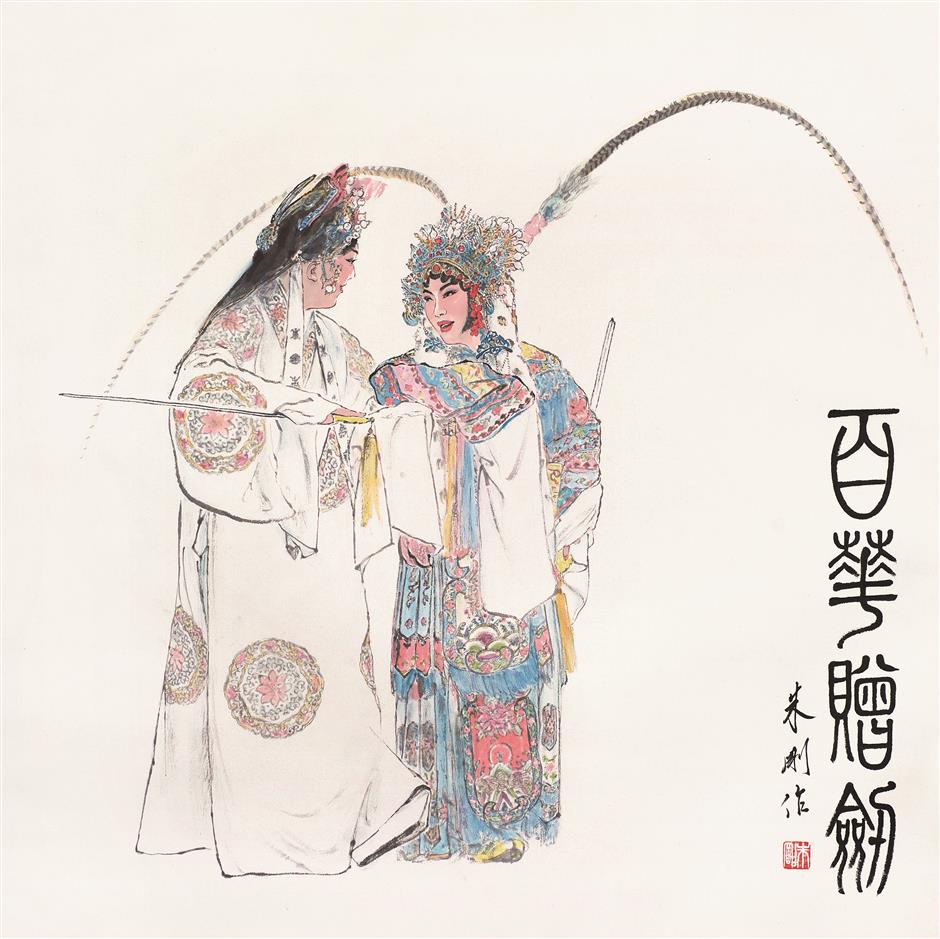 Baihua trusts her lover implicitly and promotes him to the post of vice general to defend the city of Phoenix, a strategically important place. Jiang sends the military information back to the central government, and the city is lost.

Baihua fights hard against outnumbered government forces. When Jiang arrives with the treasured sword and offers her amnesty, she realizes she has been betrayed.

Filled with grief and indignation, she stabs Jiang with the sword before using it to kill herself.

In Zhu Gang’s painting, Baihua’s affection and happiness is reflected in her eyes as she presents the sword to Jiang. However, their different loyalties represent crossed swords, and their love is doomed.