From a shed to Buddhist shrine

The monk Pu Jing would never live to discover that the shabby thatched shed he set up for meditation in 218 would expand into being one of the most important Buddhist shrines in south China, boasting some of the nation’s most spectacular ancient architecture.

Yuquan Temple, lying at the foot of the eastern side of the Yuquan Mountain in Dangyang, Hubei Province, is a perfect example of Chinese feng shui (geomantic omen). There is a theory that a good, blessed location should be guarded by four auspicious animals in four directions: a green dragon, white tiger, red rosefinch and black xuanwu, which is a mythological animal that has the body of a turtle and the tail of a snake.

The mountain the temple leans against is the “turtle-snake,” while the river running in front of its gate is the red bird that flaps its wings to gather beneficial energy.

To put it scientifically in a modern perspective, the temple sits with its back against the mountain to block the chilly winter wind from the northwest.

The river carries a cooling breeze from the southeast in the summer, while the southern front gate provides enough sunshine for the whole compound. The range in the back of the temple functions as a shield from potential mountain torrents rushing down. 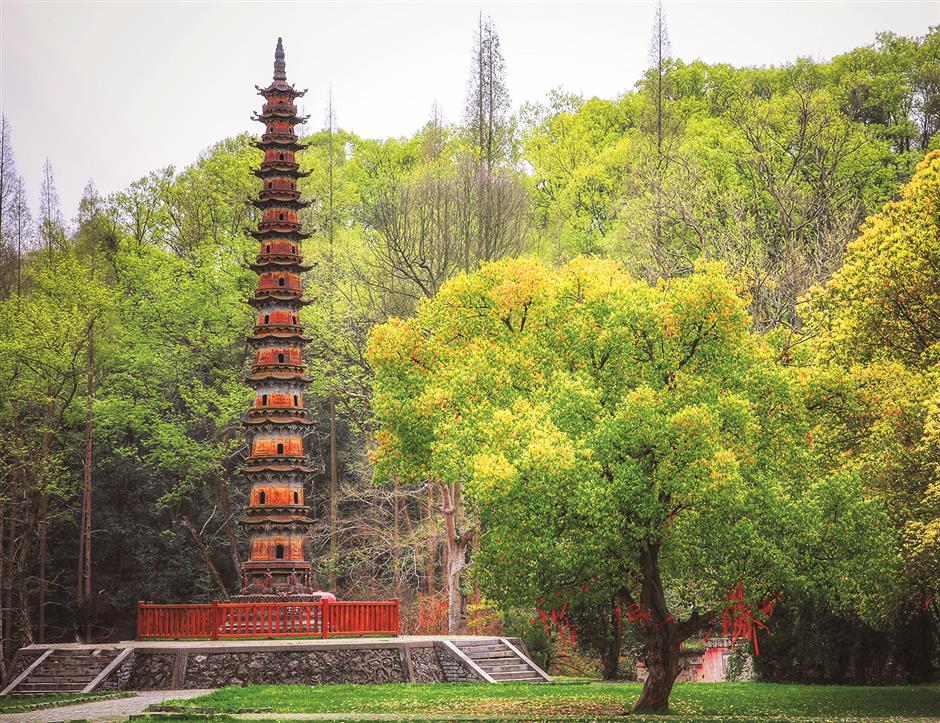 The temple’s landmark Yuquan Iron Tower is of significant importance to ancient China’s metallurgy technology study — iron forging and coatings for corrosion protection of metals. It’s the country’s highest, heaviest and the most intact iron tower.

The tower base is carved with patterns of sea waves, dragons and flowers and eight muscular iron-forged men stand in eight directions to guard the tower.

The 13-floor octagonal iron construction is a home to store senior monks’ sarira (body relics after cremation). The hexagonal underground palace features a white jade platform, where three stone boxes have kept the sarira over the ensuing dynasties.

According to “Yuquan Annal,” a master monk Hong Jing in the Tang Dynasty (AD 618-907) went to the capital (today’s Xi’an in Shaanxi Province) to translate the sutras at the bidding of Empress Wu Zetian. After he returned, the monk built the tower to preserve the sarira granted by the empress.

Today visitors can venture into an underground palace in a tunnel to see the Buddhist treasures. It displays a vat from the Qing Dynasty (1636-1911) for a monk’s “great decease.”

There are two major ways for a monk to end his life. One is cremation: A monk sits on a sandal-wood shelf to burn himself, which might leave the sarira. The other way is a “vat bury.” A monk sits in a vat in a Buddhist gesture until he passes away, which would become a “mummified Buddha” after the body was processed and preserved in drying and sealing treatments.

Not far away is the spring water named “Jumping Pearl,” a real wonder that lives up to its reputation. If you cry or clap your hands near the spring, the water will gush and bubble out like pearls jumping. If you make a louder sound, more water pours out.

Daxiong Hall (the Great Buddha’s Hall) is the place to worship the Buddha Sakyamuni, who sits high on a jade Sumeru seat. The construction is supported by 72 wooden pillars made of golden Phoebe trees (a precious wood in China’s architecture). The colored roof is painted with fire balls, lotus and flying dragons.

The hall is the biggest ancient building in south China, which was built in AD 593. Its latest renovation was finished in 1984.

At the front gate of the Daxiong Hall stands a gingko tree said to be more than 1,800 years old.

The temple also boasts Hubei’s two biggest wisteria trees, both over 400 years old. In the summer from July to September, the white and blue flowers bloom to form a giant umbrella that brings a cool, fragrant shade to people.