Step into the magic garden of a true master

Qian Gang's "My Garden," on show at the Bund One Art Museum, features 45 oil paintings and six acrylic works, covering the artist's output over the past decade since his return to Shanghai.

Born in 1958 in Shanghai, Qian started drawing as a child. After he graduated from an art school in Shanghai, he went on to further his studies in the United States, where he stayed for 16 years.

Although he led a successful career as a graphic designer, he never gave up his dream of being a professional painter.

They seem like a mysterious garden from a dream. The colors he uses and the objects he depicts are profound and elegant.

"I have always been concerned with the relation between reality and fabrication," he explains.

"I express the possibility of its existence by the way of painting and express my longing for the ideal life with fictitious authenticity."

The highlight of the exhibition is his white-on-black acrylic work.

"The greatest agony in painting is having no inspiration," Qian says.

Unfortunately, he said he was drained of his inspiration for three years, and deeply confused.

It was while getting drunk once in Normandy that he saw a street lamp cast the shadow of a tree on a white wall.

It was a sheer black projection without colors. The stark projection fitted his stark mood, and this image of a tree's shadow without any three-dimensional effect triggered his imagination.

The artist first paints the canvas completely in black, and then paints the objects in white on the black background, either by brush or by way of silk screen printing to produce a slight three-dimensional effect.

Such effects give viewers an impression of white coming out from the black, which implies the artist's desperation of escaping from the darkness.

The innovative technique in mixing different art media makes it appear as a fusion of printmaking, painting and paper cutting.

The quiet and silent drama taking place in these black and white landscapes depicts human figures, trees, horses, leopards and dogs, sharing a narrative power – both enigmatic and conceivably surreal.

Desire, fiction and dreams are also the subjects in his most recent canvases. These oil paintings are quite different from the previous periods in their amplified symbolism and clear, obscure style.

The bright and sensual colors are endowed with a metaphysical light that empowers the imagination of the viewers on those parrots, dogs, flowers and lips.

Surprisingly, the eyes of those parrots radiate the light of jewelry, conjuring up a world, opulent yet melancholy. 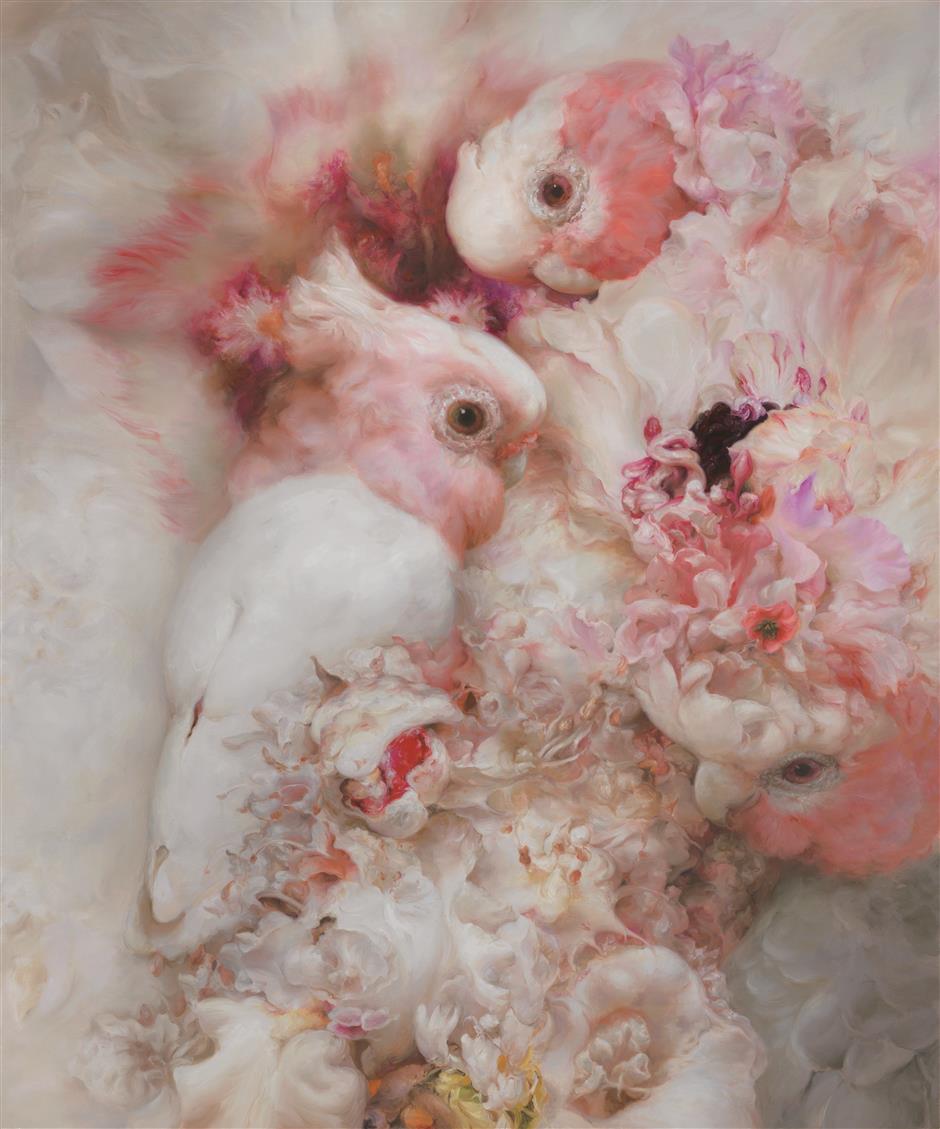 ﻿
Special Reports
﻿
Step into the magic garden of a true master
Painting with light to create a pure, peaceful world
Masterpiece of carvings hidden in a forest reveals ancients skills
Jewelry that encapsulates an artist's dreams
Lacquer artist experiments with techniques and art forms to explore gray areas of life
Country's first cartoon and animation museum opens its doors
Still lifes standing test of time in artist's solo exhibition
Tibetan musicians travel from river to river for concert
Dazzling array of Chinese artworks to be auctioned off
A female trailblazer in architecture and design
EXPLORE SHINE