This year, Jiading Town in Jiading District has implemented four plans to improve the soft power, recall local memories and support the development of Jiading New City through images and videos, performances, original designs and readings.

In June, renowned publisher and artist Xu Mingsong held a photography exhibition to show the charm of Jiading New City, one of five "new cities" in Shanghai. One hundred of Xu's photographic works were on display at the innovation park Now Factory in the old town of Jiading.

Xu is adept at recording moving moments via the combination of light and shadow with a sense of beauty of hazy mood. The exhibition attracted many celebrities, art lovers and Jiading residents.

"Through the lens of Xu, I feel a different kind of old town glamor," said a resident surnamed Chen.

The exhibition is part of the plan launched by Jiading Town. Focusing on the four themes of innovation, integration, humanities and inheritance, the plan aims to build an image file and database of the town and people. The memory of the town's development recorded by the photos and videos is worth collecting. 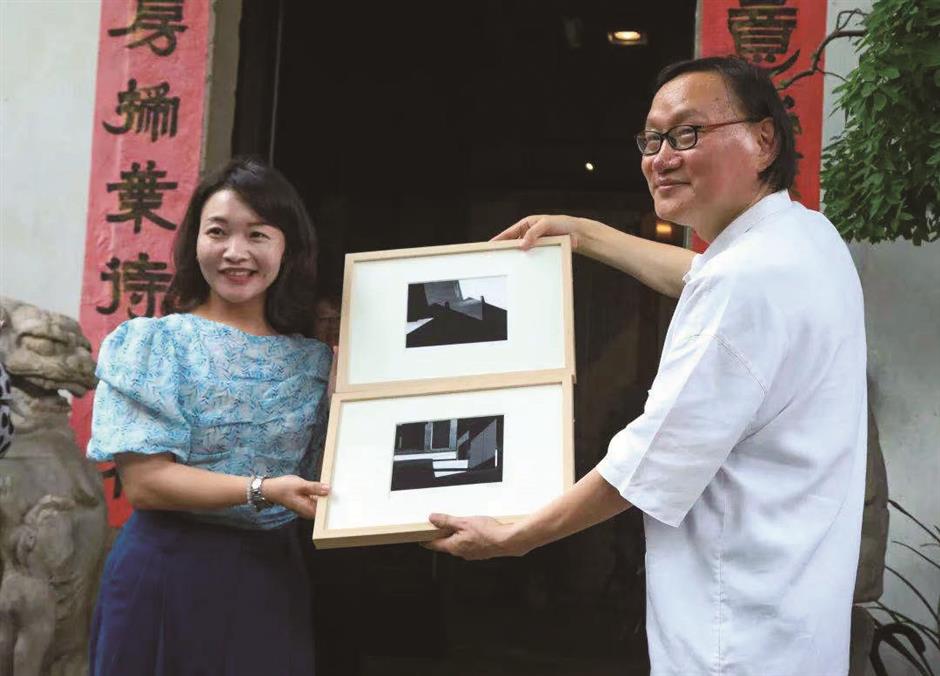 A documentary called "My Neighbor is Confucius" was made by the town and Shanghai Media Group last year. It examines the connection between Confucian classics, traditional culture and this ancient town.

A short video shot by Jiading Town brings residents up to speed on chengguan or urban management staff, with the aim of rallying them to support and help chengguan. The video was viewed nearly one million times online.

"After watching the video, I have became a fan of these chengguan," said a worker at a delivery station surnamed Wang. "I found they are not only hardworking but also versatile. It almost enhanced my original understanding of them."

Wang added that when these chengguan saw that the floor was stacked high with many parcels at the gate of the delivery station, they were willing to help him reorganize the packages.

A public welfare image and video alliance was recently established, having made a series of short videos to show scenic spots in Jiading Town to the public, including Fahua Tower from the Song Dynasty (960-1279), the Temple of Confucius and Wisteria Park. 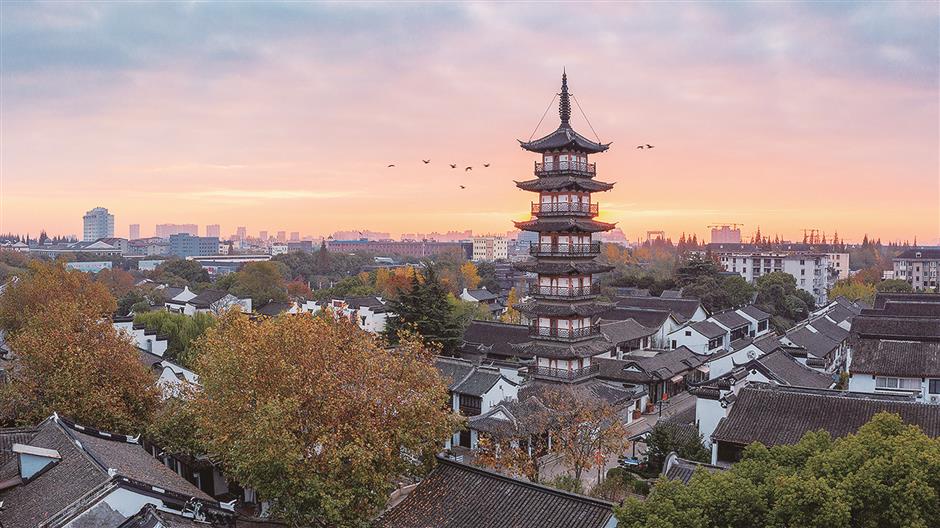 Fahua Tower, a landmark in Jiading, is featured in a short video to introduce scenic spots in the district.

Creating a literary atmosphere in the old town via reading

"The activity of the brand is oriented to people from all works of life. We hope to show a variety of life and emotions through reading aloud," the person in charge said.

More than 20 related short videos have been made, and many people, including a community official, former servicemen and teenagers, have taken part in the activities.

Jiading Town has developed cultural spaces like the community library and bookstore to improve residents' reading experience and promote a reading atmosphere. 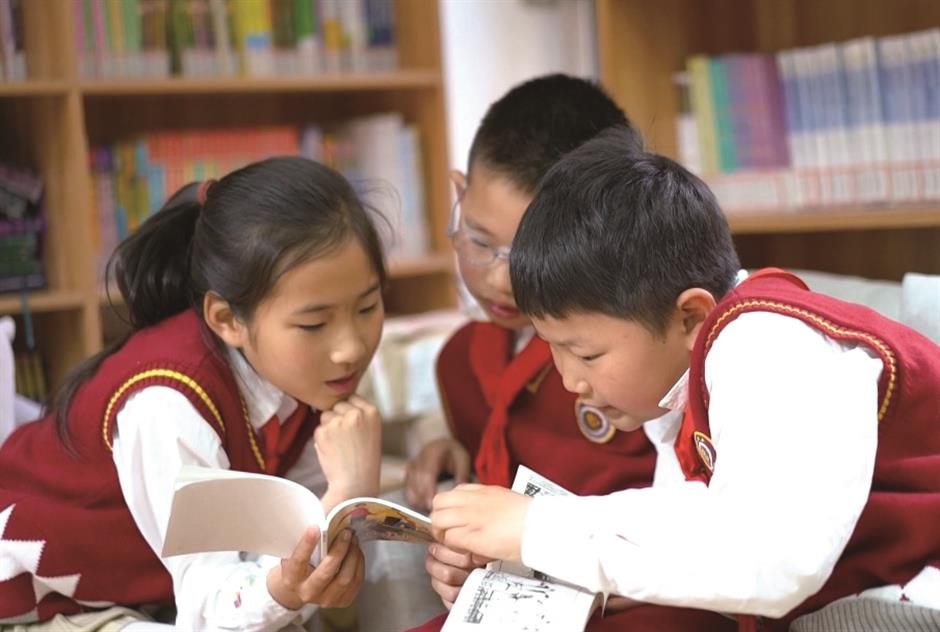 Students read a comic book telling the stories of the founding of the Communist Party of China.

A quyi (storytelling) performance – "Laughter on the Footpath" – created by the Jiading Town was performed for the first time at Jiading Theater in June to celebrate the 100th anniversary of the Communist Party of China.

Adapted from a real event, the story centers around the cooperation between Party members and residents of community committees, property management companies and homeowner committees during the construction of a footpath along a river.

"To ensure the development of the footpath, the staff of my community must communicate and negotiate with each household from door to door," said a resident surnamed Shen.

"This is not only an excellent literary and artistic work, but also a profound lesson that expresses the Party's purpose of serving the people and transmits positive energy," a Party member surnamed Liu said after watching the performance.

The plan to record the present situation and show a resident's life and spirit of the time is a way of telling the story of Jiading, which is warm and exciting, a community officer said. 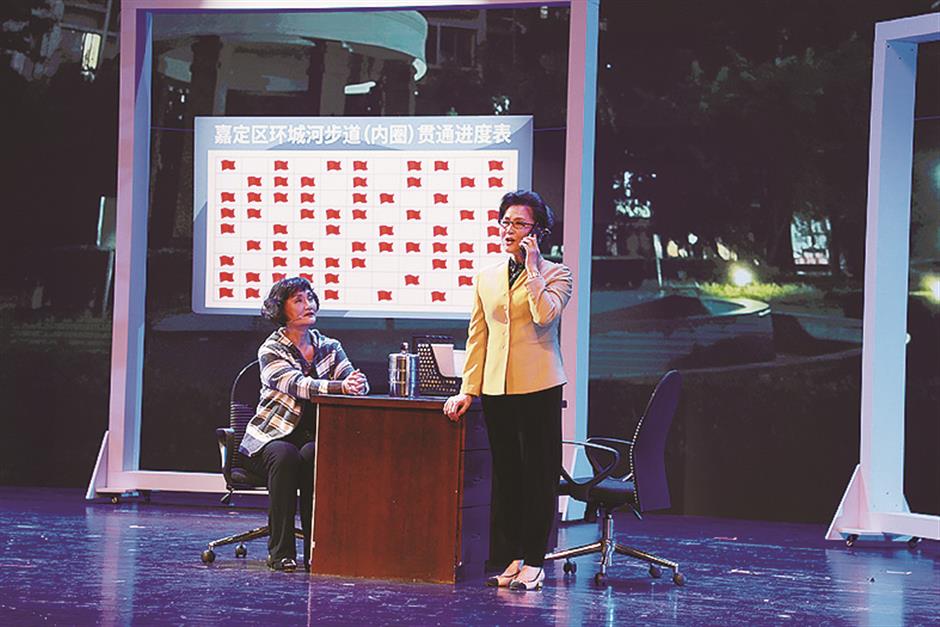 Adapted from a real event, "Laughter on the Footpath" was well received by residents.

Retrieving the memory of hometown with original designs

The Xidajie Street, one of the old town's landmarks, has become a historical area. It contains many people's memories and stories from history. This year, the old town partnered with a design team to build a service station on the street. The exterior of the building was built in an ancient style, but the interior has digital and multimedia technology.

This station is included in the plan to develop the quality of the town through original designs. Moreover, many of the plan's other activities, including storytelling and drawing an old town map, took place to help people have a happy life in Jiading.