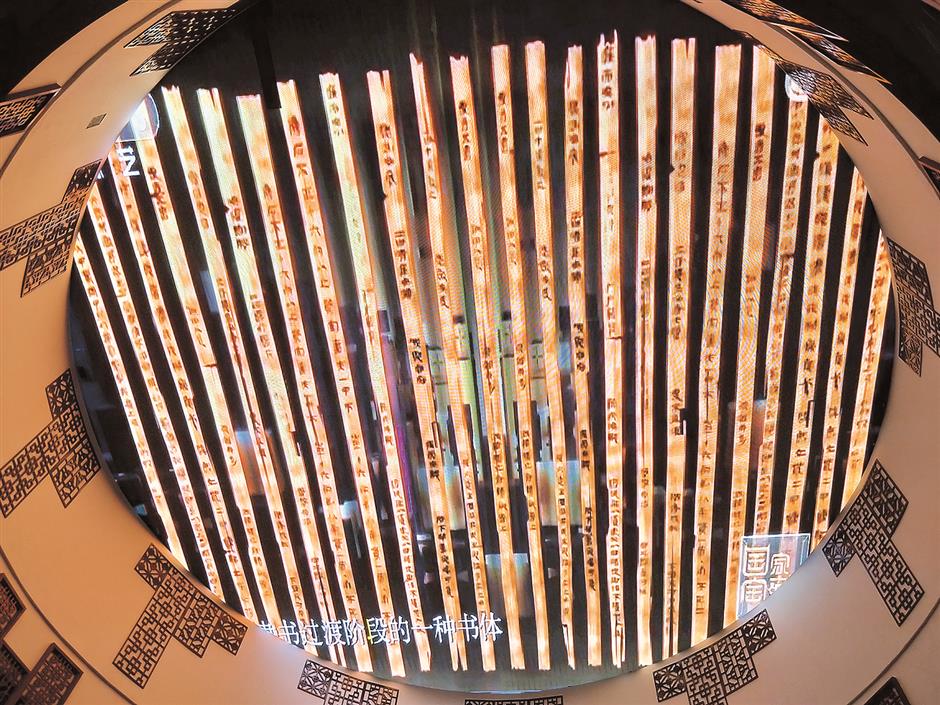 Shuihudi bamboo slips, which were the main media for writing documents in China before the widespread use of paper, were found by chance by a member of a local commune named Zhang Zedong.

Over 1,000 bamboo slips were discovered in a Qin tomb in Shuihudi, Yunmeng County, Hubei Province, in 1975. The artifacts are of great value to the historical analysis of the politics and law of the late Warring States Period (476-211 BC) to the Qin Dynasty (221-206 BC).

Named after the place they were found, the Shuihudi bamboo slips, which were the main media for writing documents in China before the widespread use of paper, were found by chance by a member of a local commune named Zhang Zedong.

Zhang decided to dig a trench on his farm to improve water draining. As the trench got deeper, he noticed the color of the soil changed from yellow to greenish-black.

He saw soil with a similar color at the site of an ancient tomb in Shuihudi two years earlier, so he speculated there was something special underground.

Zhang alerted the county's cultural center, which passed the information on to experts from the Hubei Provincial Museum.

The museum's archeological team began to excavate the site at the end of 1975. The State Administration of Cultural Heritage sent Li Xueqin, recognized as one of the most distinguished Chinese scholars, to direct the team.

A total of 1,155 complete and 80 partial bamboo slips were found in the tomb, the owner of which is believed to be a Qin official named Xi.

According to researchers, Xi joined the military when he was young, and once fought in a war waged by Qin Shi Huang (259-210 BC), founder of the Qin Dynasty and the first emperor of a unified China, against six major kingdoms. Every record on the bamboo slips was written by Xi.

Although the bamboo slips had been buried underground for thousands of years, they were well preserved thanks to the airtight environment.

Experts think this was due to green paste mud used as a natural sealing material to cover the coffin, as well as the tomb being submerged in ground water for a long time.

Bloated with water, the bamboo slips needed to remain in a carefully controlled environment lest they dry out. In March of 1976, the State Administration of Cultural Heritage quickly transferred the cultural relics to Beijing. Over time, the bamboo slips dried out and were stored in glass test tubes.

Every slip measures 23.1 to 27.8 centimeters in length and 0.5 to 0.8 centimeters in width. The records can be divided into 10 chapters, the highlight of which introduces the "18 kinds of Qin statutes."

The chapter consists of 202 bamboo slips, which were placed on the right side of the tomb.

Some of the laws featured in the text are practical even today. One of the Qin statutes about heroic acts stated if a person was accidentally injured and a person within 100 paces didn't lend a helping hand, he would be fined as much as two suits of armor, which was quite expensive at that time.

Another example is associated with the quality of construction work.

The Qin statute mandates that if building material didn't comply with standards, everyone involved in the project, including engineers and labor contractors, would be punished.

If a city wall was poorly built, the manufacturer would be flogged 100 times and the supervising department fined.

In addition to law, Shuihudi bamboo slips also provide insight into the script – Qin clerical – that people used at the time. It evolved from seal script, which was widely used during the Han Dynasty (202 BC-AD220). Clerical script tends to be square and wide. As such, the characters on the bamboo slips were part of the script's evolution.

Shuihudi bamboo slips are displayed at the Hubei Provincial Museum, and have become one of its highlights.