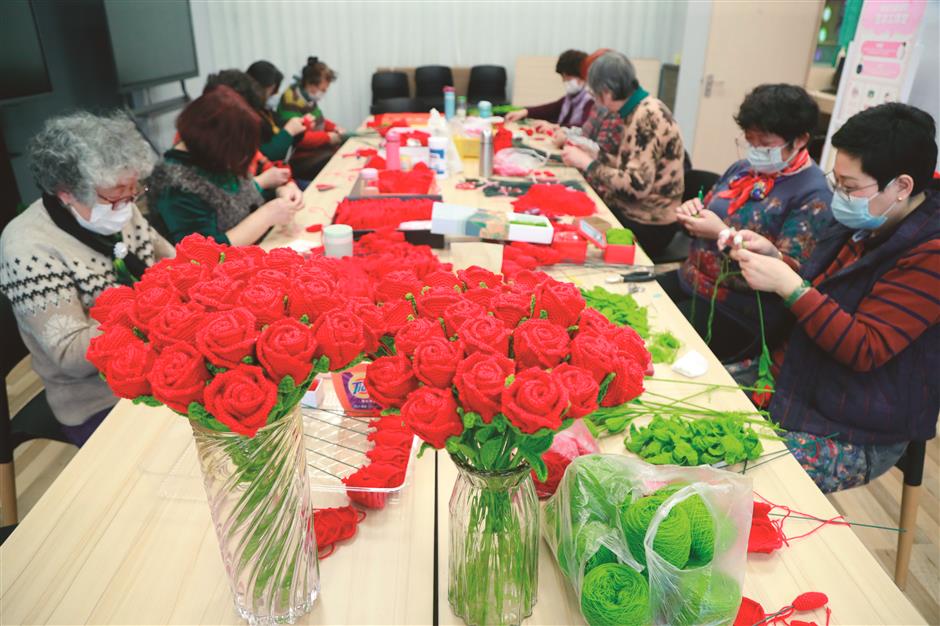 Behind the distinctive handmade woolen "Olympic rose" bouquets used to replace fresh flowers at the Winter Olympics was a group of talented aunties who weave dreams with both hands.

Last September, this group of aunts, who previously only did weaving for a hobby, were tasked with creating the Games' award bouquets. And Yangpu aunties were responsible for the very large number of roses in the bouquets.

In late September, they received intensive training in bouquet weaving.

"There are seven kinds of flowers in the whole bouquet. Among them, making roses is the most difficult, because it requires a high degree of needling," auntie Huang Hongying told Shanghai Daily.

"Our needling methods use short needles. Compared with long needles, short needles require tight stitches, one needle at a time, involving a lot of lines and cumbersome steps," she said.

Usually, it takes at least eight hours for such a rose to be made by one person from beginning to end. This time, the aunts were required to make 2,400 roses in two months.

Aunt Mou Guoying said that she never thought that she could make a contribution to the Beijing Winter Olympics.

"At the thought that our flowers can 'fly' around the world and be seen by foreign friends as a Chinese craft and folk treasure, I feel very much honored to have made a contribution to the dissemination of art."

"They are all devoted to the weaving work. Everyone said that no matter how hard and tired they are, they will be very excited as long as they finally see this flower on the awards table. In addition, given what they made is roses, I would say that they are all 'sonorous roses'."