In the afternoon: Old and new in Yangpu District

Afternoon can be made to feel nostalgic. When it comes to the old story of Yangpu, it's natural that the old residence under the Yangpu Bridge where Yangpu workers once lived is indispensable. In Yangpu, the old and new coexist in the "present progressive tense." Yangpu has consistently adhered to the important concept of "the people's city by the people and for the people," and continuously enhanced citizens' sense of gain, happiness and security. 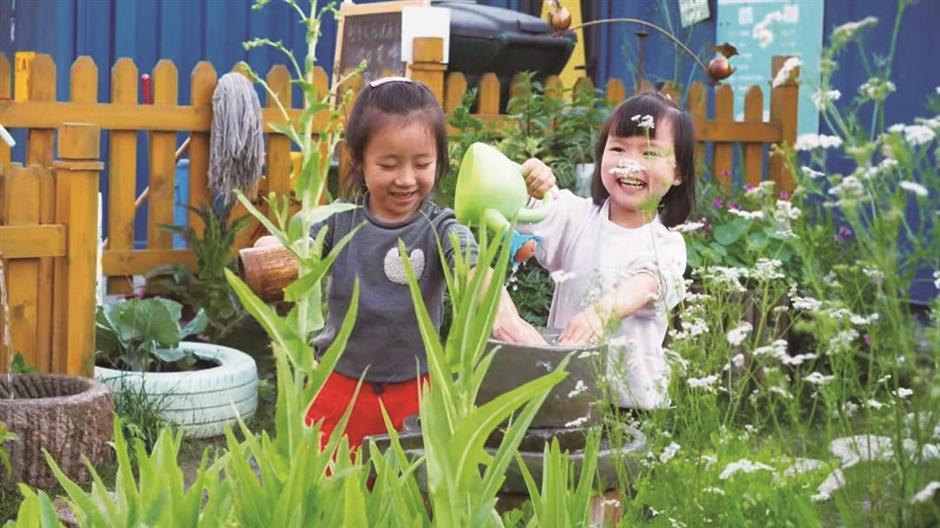 Girls have a happy time at a mini farm in a local community.

Urban regeneration has become the most vivid achievement for Yangpu in terms of the concept of "the people's city." Since 2019, Yangpu has relocated more than 1,000 families for three consecutive years and launched 16 new relocation projects in 2021.

As of December 27, 2021, 15,242 families have been relocated, exceeding the target of last year's urban regeneration.

Behind the accelerated promotion of urban regeneration is the innovative operation mode. Yangpu has made every effort to improve residents' housing conditions by demolishing, renovating and building houses.

In addition to urban regeneration, Yangpu also vigorously promoted the construction of beautiful homes to make the old neighborhood "elegant and interesting."

A shared gate provides a shortcut and combines two neighboring residential compounds. It also provides access to a neighborhood farm built on abandoned ground. Through the efforts of the neighborhood committee, community planners and residents, it has become a green creative farm. Residents from the two neighboring residential compounds have become regular visitors to the farm, watering, planting vegetables and weeding together.

The farm is a vivid example of how Yangpu is building a social governance community that inspires people, invites everyone to participate and lives up to being the people's city.