Presale movie tickets for the upcoming Spring Festival has already surpassed 300 million yuan (US$46.4 million) as of yesterday, according to statistics of the online ticketing platform Taopiaopiao.

Seven homegrown films will be released during the weeklong Spring Festival holiday starting on February 11, which is one of the most lucrative and important screening seasons of the year in China.

As of yesterday, the third installment of Chen Sicheng’s popular film franchise “Detective Chinatown” has topped box office presales with revenues of around 200 million yuan, followed by “Hi, Mom” and “Assassin in Red.”

Combining suspense with humor, the second installment which was released prior to the 2018 Spring Festival reaped 3.39 billion yuan at the box office, nearly four times that of the first installment when it debuted in June three years ago.

Set in Tokyo, the third installment sees detectives Tang Ren and Qin Feng try to solve a mysterious and complicated murder case. The battle between the strongest detectives in Asia is about to bring about a new round of laughter. 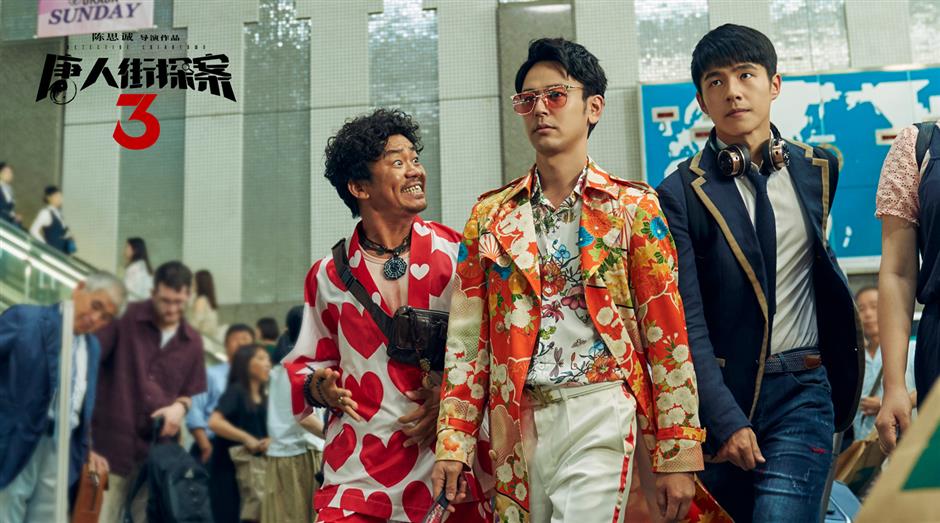 “Hi, Mom” is the directorial debut of comedian Jia Ling and a tribute to her late mother Li Huanying. Inspired by Jia’s own sorrowful experience of losing her mom 18 years ago, the film is about a girl’s travel back in time to a world 20 years ago, where she understands the dreams of her parents who were then teenagers.

“Assassin in Red,” helmed by Lu Yang, revolves around a father who needs to kill Lu Kongwen, the author of a fantasy novel series, to save his missing daughter. It boasts an innovative plot, as well as visually impelling special effects to depict the fantasy world of the novel, which begins to impact life in the real world.

“The Yinyang Master” is a mobile-game-turned fantasy epic. It follows Qing Ming, a man who is capable of traversing between the worlds of humans and monsters, to protect a city. 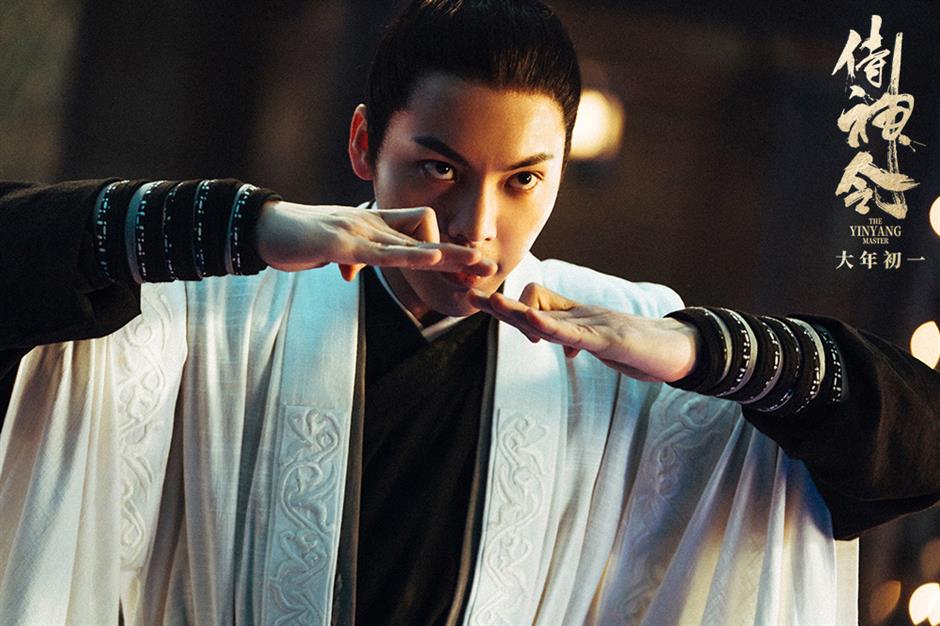 A Chinese remake of the Japanese film “Key of Life,” the movie tells the story of a hapless loser who accidentally assumes the identity of an amnesia victim without knowing that he is an assassin. However, both of them come to realize purpose of life in the end.

“New Gods: Nezha Reborn” is produced by the Light Chaser Animation, the same studio which produced the “White Snake,” an acclaimed animation in 2019. The film is a modern tale of a mythical character, Nezha, who becomes a real man 3,000 years after he defeated the Dragon King.

“Boonie Bears: The Wild Life,” the seventh installment of the “Boonie Bears” series, follows Bald Qiang’s adventure to a wonderland where he discovers a scheme against animals. 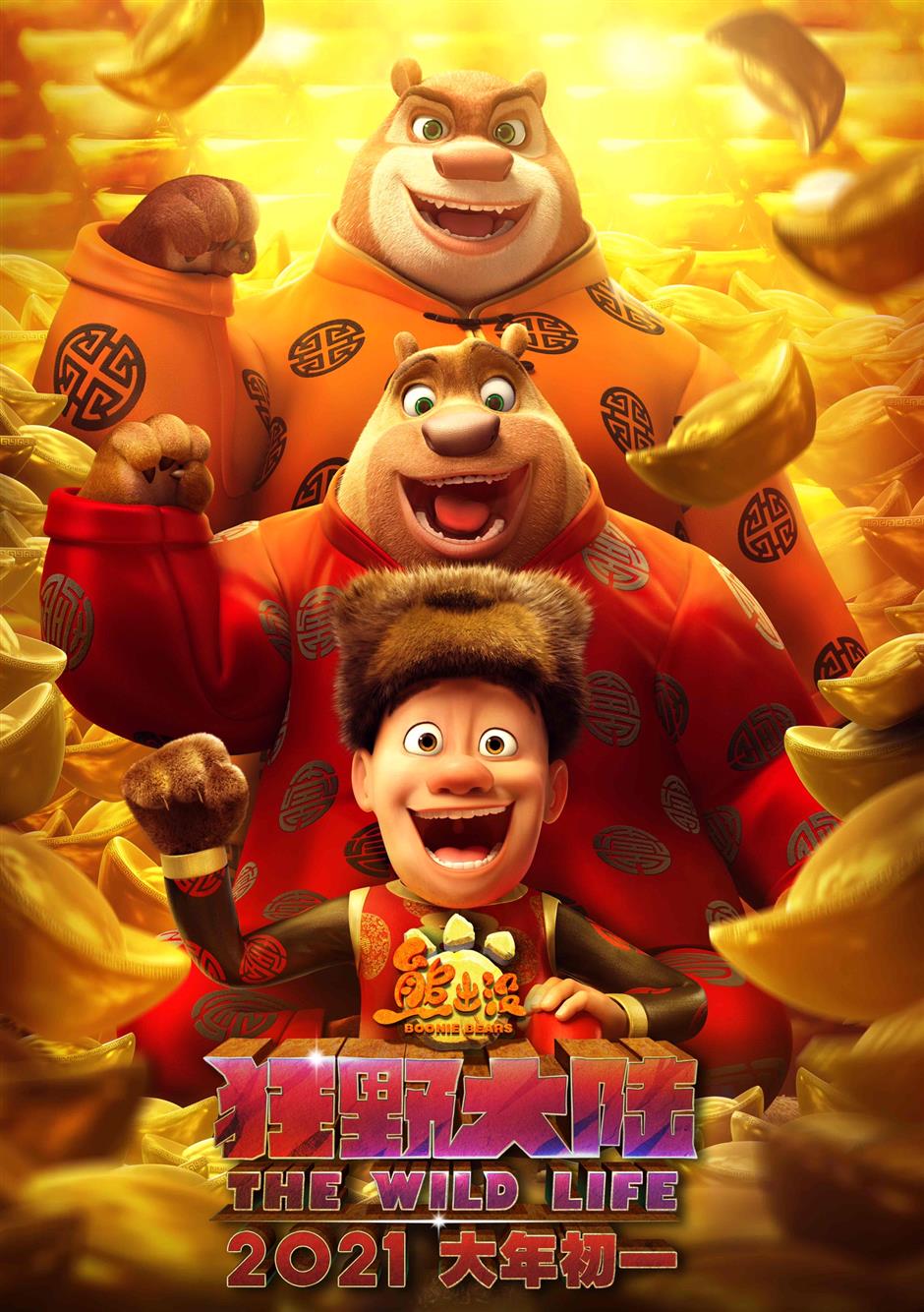 In addition to theatrical releases, several new films will be screened to a wider audience online.

“The Shaolin Temple: Legend of Debao” will be shown on iQiyi through the PVOD (premium video on demand) mode on February 12.

The movie by Hong Kong filmmaker Stanley Tong is centered on an innkeeper who receives help and mentorship from the Shaolin Temple after being framed for murder.

Lead actor Wang Baoqiang, inspired by the 1982 kung fu classic movie “The Shaolin Temple,” started his own training of martial arts at the age of 8 in the Shaolin Temple.

Gu Yan, general manager of Shanghai Film Art Center, is optimistic about the Spring Festival box office performance in terms of the variety of movie genres.

“More people are not returning to their hometowns for the holiday due to the pandemic,” Gu said. “Going to the cinemas might be a good option for people to celebrate the festival.”

To reduce the risk of COVID-19 infection, attendance will be reduced to 75 percent of a theater’s capacity. Temperature measurement, mask-wearing, online-ticketing and the disinfection of theater facilities is still required at cinemas nationwide.