Time is of the essence in atypical concert

For those who missed this multi-dimensional musical journey, video clips of the concert will be featured in the online April celebration of the 150th anniversary of the Royal Albert Hall in London. Talks on a possible tour are also under way.

“I have always been interested in Einstein’s view of time and space,” Zhang told Shanghai Daily about his inspiration for the concert.

“His theory of special relativity says that time is a persistent and stubborn illusion,” he explained. “Unlike our daily experience, time can move forward and reverse backward. You are in your own Mobius strip as you enter the ‘Mobius Concert.’ Your ‘time’ moves forward musically and backward visually. Your past and your future are together, and then you begin to think: ‘What does time mean to me?’” 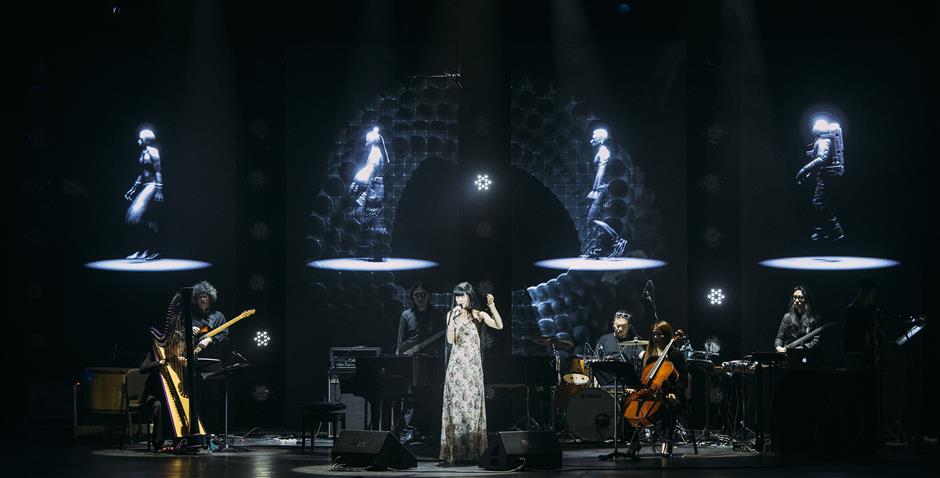 The “time” of concertgoers moves forward musically and backward visually.

These concepts can be a bit hard for some to grasp. In mathematics, the Mobius strip is a surface with only one side embedded in three-dimensional space. An example can be created by taking a strip of paper, giving one end a half twist and then joining the ends to form a loop, or simple closed curve. If its full length were crawled by an ant, the ant would return to its starting point having traversed both sides of the paper without ever crossing an edge.

Einstein probably would be happy that he serves as inspiration for musicians, since he famously played violin and piano, and loved Bach and Beethoven. This isn’t the first time he has featured in musical creations.

In 1975, avant-garde US composer Philip Glass wrote his first opera, entitled “Einstein on the Beach.” It was an atypical four-act piece that featured synthesizers and woodwind instruments.

Zhang, the composer and producer of the Shanghai concert, played piano and the sheng, an ancient Chinese reed instrument with vertical pipes, in the opening part and intermezzos of the concert.

Zhang is known for embracing cross-boundary experiments, including concerts incorporating rock elements or improvising with a jazz band.

“I’ve been attracted by synthesizers, maybe because I came from an ethnic music background,” he explained. “The synthesizer musician for this concert has been traveling around to sample primitive sounds in recent years. How intriguing!”

The multi-dimensional concert featured music and singers from Han, Mongolian, Uygur and Tibetan ethnic groups in China in its five parts. Wild textures of synthesizer and rock music instruments were added, along with calming classical melodies from the cello.

The concert features a variety of musical and nonmusical elements.

Multimedia performances have become a notable addition to the concert scene in the last 10 years or so. They are considered by some musicians as the way of future for classical music concerts.

In the current era, classical music composers can create the sound of an orchestra with the tap of a mouse, artificial intelligence software can compose different music, and musicians and concert venues are experimenting with ways to cross traditional boundaries.

For example, British composer Michael Zev Gordon was invited by a biomedical research charity to write a piece of choral music based on DNA comparisons of 250 singers and 250 non-musicians.

Chinese-American composer Tan Dun was commissioned by Google to compose an Internet symphony performed by an orchestra whose members were recruited online. The final result was compiled into a mash-up video that premiered on YouTube.

The 91-year-old Shanghai Concert Hall has ventured into the avant-garde with its Music Infinity series, launched five years ago. It aims to explore new possibilities in musical performance and provide a stage for young, emerging musicians.

“At first, our attempts were mainly crossing music boundaries,” said Ye Fei, vice general manager of Shanghai Concert Hall. “We have gradually expanded into breaking the boundaries of all cultural forms, especially after our first commissioned piece ‘The Tune of Water.’”

That show, which premiered in 2018, was inspired by the music of the Miao ethnic minority of Hunan Province. Its theme was life and growth, expressed through the symbol of water. It features songs passed down for generations, with a piano trio created from the songs, kung fu and calligraphy.

The idea was inspired by songs that Miao people sing to the water when they send off someone close because water flows throughout the country and they hope their emotions can be carried by water.

It was performed at the Avignon Festival in France in 2019, winning critical acclaim for its creative use of visual symbols and common objects like water and paper to resonate emotionally with foreign audiences.

The Shanghai Concert Hall reopened last year after a big renovation project that included major upgrades to the stage facilities and additional creative spaces for musicians to experiment.

“The upgraded facilities surely upgraded our ability to answer increasing demands from audiences, especially the younger generation,” Ye said. “We have integrated more multimedia elements into concerts, and we continue to explore how to do more.”

“Mobius Concert” is the first commissioned work of Music Infinity after the concert hall reopened.

“As a young musician, I respect the Shanghai Concert Hall for supporting such avant-garde experiments and for providing us with a stage and creative freedom,” Zhang said.