The role of censor looms over play-acting game entertainment

Roger Wei isn't quite sure whether to feel anxious or relieved. He owns a shop in Shanghai's Yangpu District specializing in live action role-playing games (LARP), and vendors like him are now subject to a new regulation on content of scripts.

"It seems that we need to register new scripts a month before they're used in a game," Wei said. "But so far, we haven't been told exactly how this registration system will operate."

Live action role-playing games are all the rage among young people nowadays. LARPers come to a shop like his in small groups to play roles according to scripts that define their characters and place them in fictional setting that can range from murder mysteries to fantasy adventures.

Until now, this entertainment genre has been unregulated. The new rules, issued by the Shanghai Administration of Culture and Tourism, specify that scripts involving violence, sex, animal abuse or other content of dubious merit can't be used by minors, who are defined as below 18 years old.

Wei's shop, called Shaqingkuang, is on Daxue Road near the Fudan University campus and several creative parks. It's been open for around half a year. While relatively quiet on weekdays, the shop's three rooms are always fully booked on weekends. Most of the customers are students and local white-collar workers.

Each game lasts for four to nine hours and requires a minimum of four players.

The shop offers nearly 90 scripts. The trendy review platform Dianping.com sorts them by difficulty – "for newbies," "intermediate" or "brain burning" – and by story style – "mystery," "humor" or "the modern world." 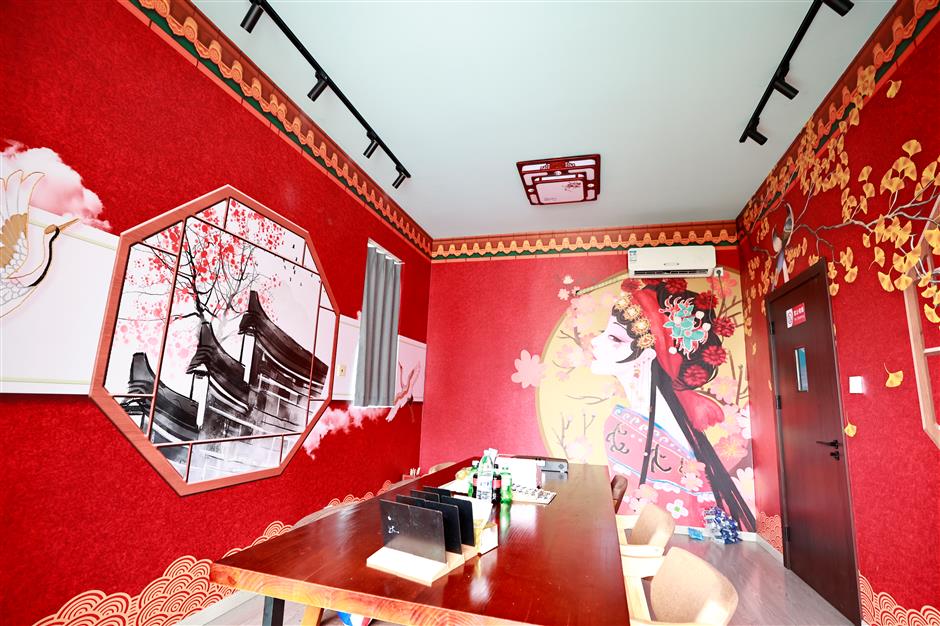 "Just like books, movies and music albums, there are extremely trendy scripts and less popular ones," Wei said. "People review them on various social networking platforms, such as TikTok and Xiaohongshu. Players have their own forums and chat groups, too, and we join them to keep up with what customers want."

One of the most ordered scripts is titled "Martinez Died in the Museum." Its story is staged in a fictional world, where people fight for a scroll, in which writes a spell that could break the deadly shield to a new world. The game includes six players, three women and three men, and they would solve a series of murders on the way toward the scroll.

Before the regulation was issued, culture-supervision authorities were conducting unannounced spot inspections at shops like Wei's. They would shuffle through scripts, he said, and order him to remove those deemed "inappropriate."

For example, a script entitled "Qinglou" had to be removed from the shop. Qinglou means "brothel" in Chinese, and the story indeed took place in a brothel during the Tang Dynasty (AD 618-907).

Wei said he was a bit puzzled by its removal, since nothing in the script was obscene. The action, he said, was like judging a play by its title.

The new regulation may bring more clarity about what content is acceptable and what is not for minors, he said.

However, most play-acting scripts aren't really aimed at minors.

"It's not only because of murders and some violence in some scripts, but also because minors don't really grasp stories very well," he said. "Even if they did role-playing, I don't think they would find it all that much fun."

Wei says his shop receives calls from parents from time to time, asking to book a game for their children. They seek scripts with light-hearted stories, but the choice is very limited.

"Generally, we don't serve minors," Wei said. "Sometimes very young faces show up, like 15 or 16-year-olds, and we ask them to show their IDs. They are asked to leave if they are underage."

The China Cultural Media Group, monitoring online reaction toward the new regulation, found that 33 percent of netizens on various platforms supported the regulation, and about a quarter expressed the fear that censorship will kill the industry eventually.

"We need to provide guidance to minors rather than overly protect them," commented a user on Weibo who goes by the screen name Wenhuaiyuan.

"And we should certainly not be overly protective of the entire population, adults included."

Meanwhile, the new regulation doesn't address the issue of copyright protection for role-playing scripts, which is actually a big problem in the relatively new industry.

"I buy all my scripts from publishers," Wei said.

"We call them 'publishers,' but they're actually different from mainstream book publishers."

In China, every legally published book requires a plate number, but play-acting scripts don't. Therefore, it is difficult for writers to protect their works.

In Changsha, capital of Hunan Province, a trial recently began on a copyright dispute involving a script entitled "The Mental Diary of a Yandere Boy." The title refers to a Japanese term describing an unhealthy love obsession.

The script was allegedly released by a company in Changsha, but soon its pirated versions spread far and wide in online stores.

The company claims that half of all "Mental Diary" scripts now in the market are pirated versions sold by stores on Taobao or WeChat. The piracy, it claims, causes them a loss of more than 2 million yuan (US$315,000) in royalties.

This is the first known court case of its kind, but the circumstances it addresses are shared by many writers and publishers of role-playing scripts.

Usually a script, if not limited in circulation to a specific city or shop, is sold for between 300 and 500 yuan. But on Taobao.com, some online stores are selling packages of six to eight scripts for only 50 yuan.

"Maybe there will be more regulations later," Wei said.

"As someone who is relatively new to the industry, I certainly hope that a 'barbarically growing' market will become more rational."