Concert halls are not yet open in Shanghai, but the city's music troupes are continuing their virtual programs.

Shanghai Symphony Orchestra will stream the well-acclaimed "Lush & Verdant" concert from its latest music season. Inspired by and highlighting the glory of ancient Chinese poetry, the concert will be streamed on the orchestra's WeChat Channels account tonight at 7:30pm.

The 21/22 music season opened with a concert that featured repertoire from the orchestra's Deutsche Grammophon release – Mahler's Das "Lied von der Erde" and Ye Xiaogang's "The Song of the Earth."

Mahler's well-known piece uses Chinese poetry dating back to the Tang Dynasty (AD 618-907), and Ye utilizes the same lyrics in a modern setting.

The opening concert, debuted in September 2021, also set the tone for the music season, which featured cultural dialogue and highlighted Asian works, such as "Lush & Verdant." 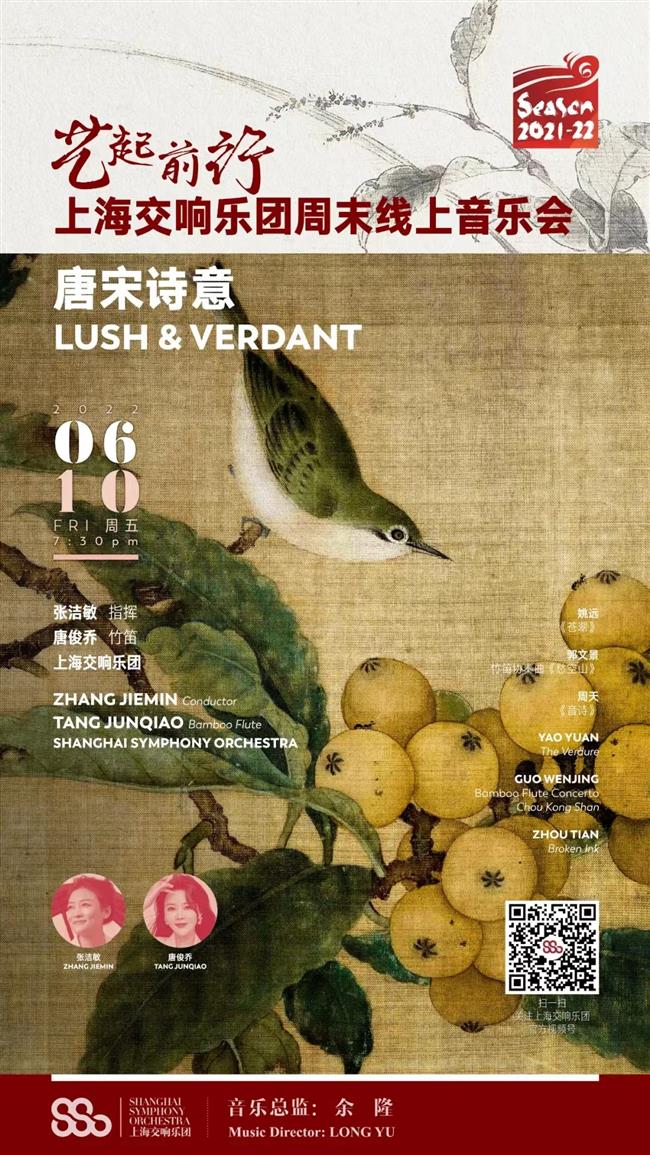 The concert was conducted by Zhang Jiemin, who worked as Zubin Mehta's assistant and later joined the historic operatic project "Turandot at the Forbidden City." Zhang was also the first woman to conduct operas in both the La Fenice and San Carlo opera houses in Italy in 2007 and 2008. She returned to her home city and served as conductor-in-residence of Shanghai Symphony Orchestra from 2010.

The concert starts with young composer Yao Yuan's "The Verdure," a refreshing work that utilizes strings and woodwind to depict natural sounds like birds singing, autumn wind or fallen leaves.

Flautist Tang Junqiao has to perform one minute non-stop shortly after the concerto starts, while many more parts that follow require the performer to quickly switch between different techniques and with seamless breathing.

"Broken Ink" is inspired by poems from the Song Dynasty (960-1279), another golden age of China's poetry after the Tang era, with repeating motifs and subjects on the relentless search for the spirit of freedom and intellectual independence.