There are many outstanding young people in Jiading. To mark their valued contributions to the nation, five of them were given commendations on China's Youth Day on May 4 – cartoonist Chen Lei, poverty alleviation volunteer Gu Cheng, farmer Lu Yunting, judge Xu Yinan and administration officer Yin Binhua. The stories of two of the award winners – Lu Yunting and Gu Cheng – are revealed here. 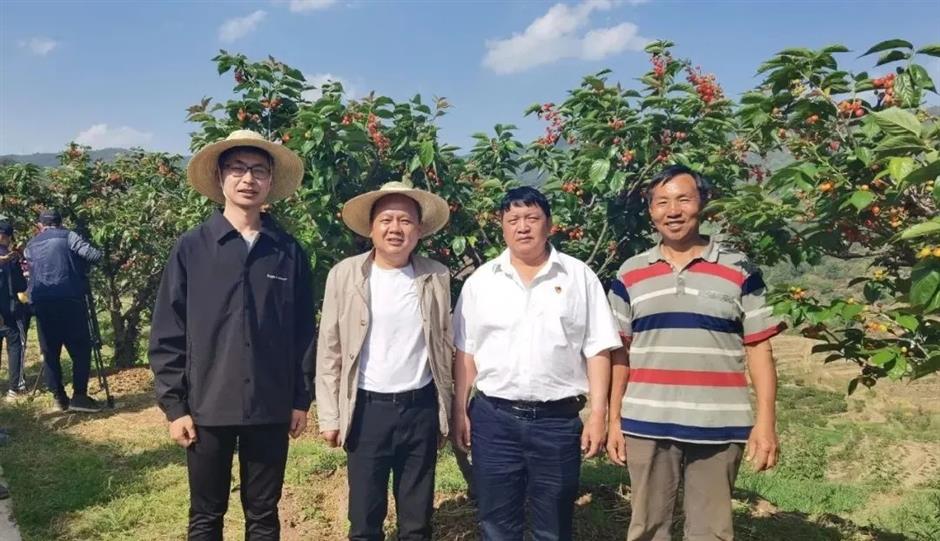 Gu Cheng (left) is pictured with local farmers in front of fruit trees that bring them profits.

Jiading and the Chuxiong Yi Autonomous Prefecture in Yunnan Province have launched 277 projects to alleviate poverty including the construction of a farm in Yizidian Village, a vegetable planting base and a logistics spot since 2016, to develop agriculture and raise local farmers' incomes.

Wuding County in the prefecture got rid of the title of national poverty county last year.

The result can be credited in part to Gu Cheng, an urban management officer in Jiading, who headed to Wuding to work as deputy chief of the local poverty alleviation office.

Wuding was one of Yunnan's 27 poorest counties in 2019. Although it covers an area of 3,322 square kilometers, the land that can be used is limited as 97 percent is mountainous and at an altitude above 1,800 meters. Only a small plateau area is suitable for growing.

As a result, Gu had been considering an industrialized way to grow local produce before his arrival.

"Growing vegetables or fruit can only help them maintain the lowest life quality, so if we want to help them get rid of poverty, we have to further increase the value of the agricultural products through deep-processing, which can bring higher income to local farmers," said Gu. 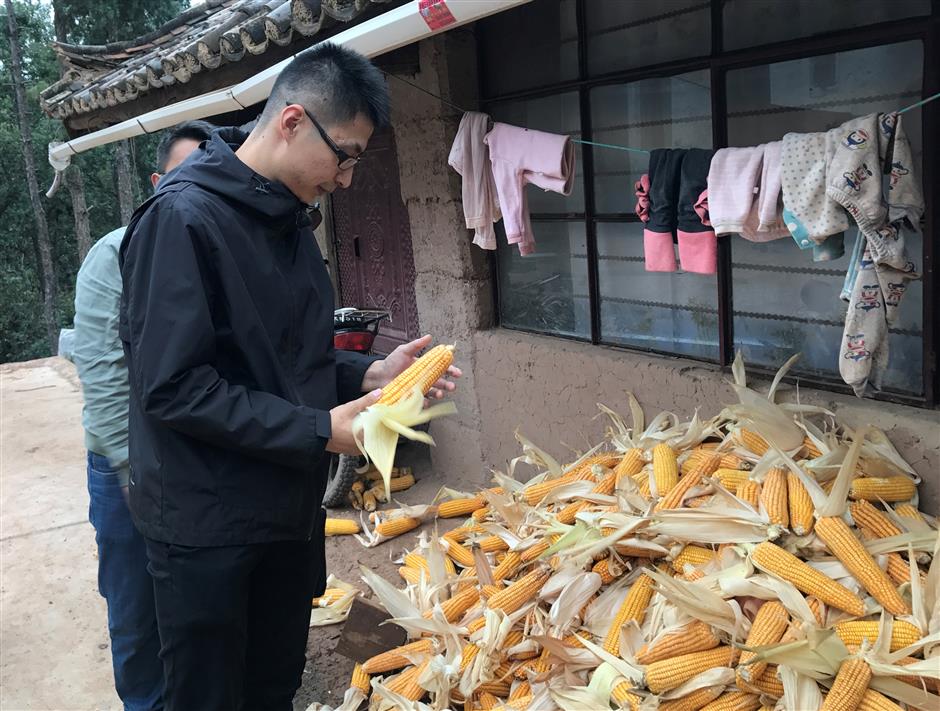 Gu checks the status of a local farmer's produce.

When Gu arrived in the county in 2019, he started to investigate the status of vegetable planting in Gaoqiao Town and made the decision to build a deep-processing warehousing and logistics base.

Gu leased the base to a local leading logistics company, bringing profits of 225,000 yuan (US$35,122) a year and benefiting more than 35,000 residents in over 9,000 households. The logistics center also promotes agricultural development in neighboring areas.

Restaurants or supermarkets in Shanghai can receive fresh vegetables in just 50 hours from Wuding, and the plateau vegetables have become a "green bank" to help increase farmers' incomes.

During a visit to Shuangbai County, Gu discovered the plateau area could breed aquatic products such as perch and hairy crabs. "There are many plateau reservoirs in Wuding, so I pondered whether we could introduce a similar project," said Gu.

After a professional assessment, Huangjing Reservoir at Tanglang Village was considered a suitable place to breed bass. However, because it was a new industry, local farmers were worried about wasting money on it. But Gu had answers to all their questions.The bass breeding base was put into operation at the end of last year.

"In a year or so, the first group of fry will grow up, and by that time, the fish not only will become a delicious dish for the table, but also a new growth point in income," Gu said.

"Successfully getting rid of poverty is not the end of my work. To prevent the return of poverty and further improve the local economy is a new test for poverty alleviation." Gu said.

Lu Yunting: City job no match to chasing the dream of farming his land back home 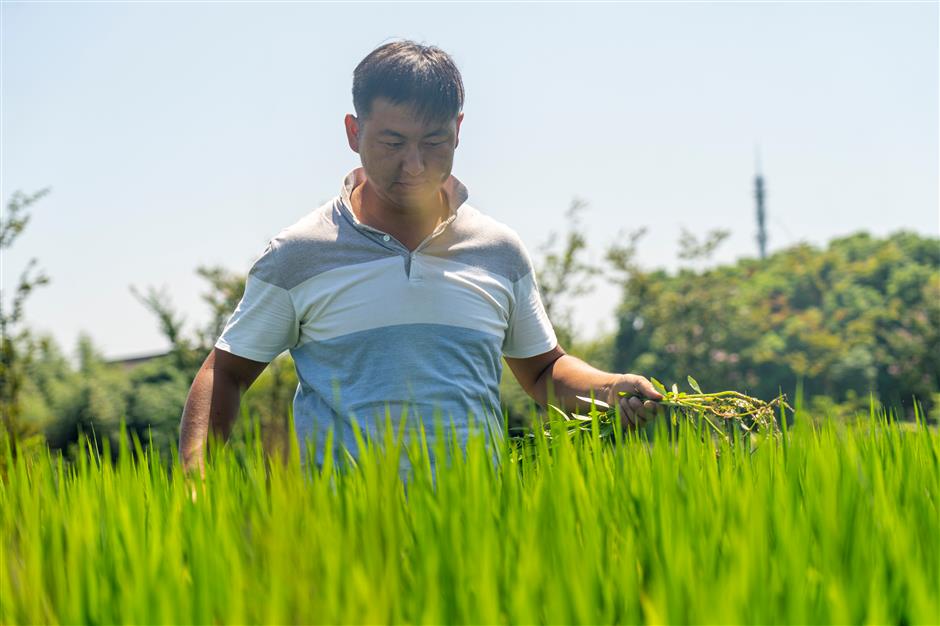 Lu Yunting in a rice field

The Fuyao Shanghai Fruit and Vegetables Professional Cooperative has gained fame on the Internet, with many schools keen to have their students visit to learn about agriculture.

Owner Lu Yunting quit his job in the city in 2013 to return to Shuangtang Village in Jiading's Huating Town and launch the farm. He was just 24 years old.

The Jiading native started to explore rice planting from scratch. Today, his farm covers more than 400 mu (26.7 hectares) and has an annual output value of over 3 million yuan (US$470,100).

When he became aware of a new government policy to promote family farms, Lu made up his mind to quit the stable job he had worked for five years and return home to follow his dream of becoming a farmer.

"I just wanted to work as a modern farmer on the land of my hometown," Lu said when he was asked what his original intention was.

"I knew nothing about agriculture, nor farming technology," said Lu. "The farm was in deficit for the first two years, so my parents were worried about me, hoping I would return to work in the city as soon as possible."

Despite the difficulties, Lu never stopped chasing his dream.

He began to take part in technical training classes for new professional farmers in Jiading, following the experts to gain experience in demonstration spots in different districts. Whenever he met obstacles in practical operation, he would ask the experts or older farmers for advice.

Eventually, his farm turned losses to profits and onto greater success.

Lu applied what he had learned to the farm, and with the realization of complete mechanization, efficiency greatly increased.

Lu used drones to spray pesticides and fertilize the crops to improve efficiency. One drone can work continuously for eight hours, covering 300 mu of land, according to Lu.

The cooperative won the gold prize and the award for most popular rice at Jiading's high-quality rice tasting conference last year.

"Rice with a good taste has two vital factors – the way of growing and planting," said Lu. To keep the quality and taste of rice, every part has to be strictly controlled with detail management in the early stages.

In the rice field, Lu has set up an intelligent alert system that can monitor insects and diseases. With such modern equipment, remote monitoring of rice fields can be realized to include timely warnings of pests and diseases.

"Our next goal is to develop science and education and leisure agriculture, adding more leisure farm travel projects, so that more children can experience the fun of planting and increase their knowledge of agriculture," Lu said. 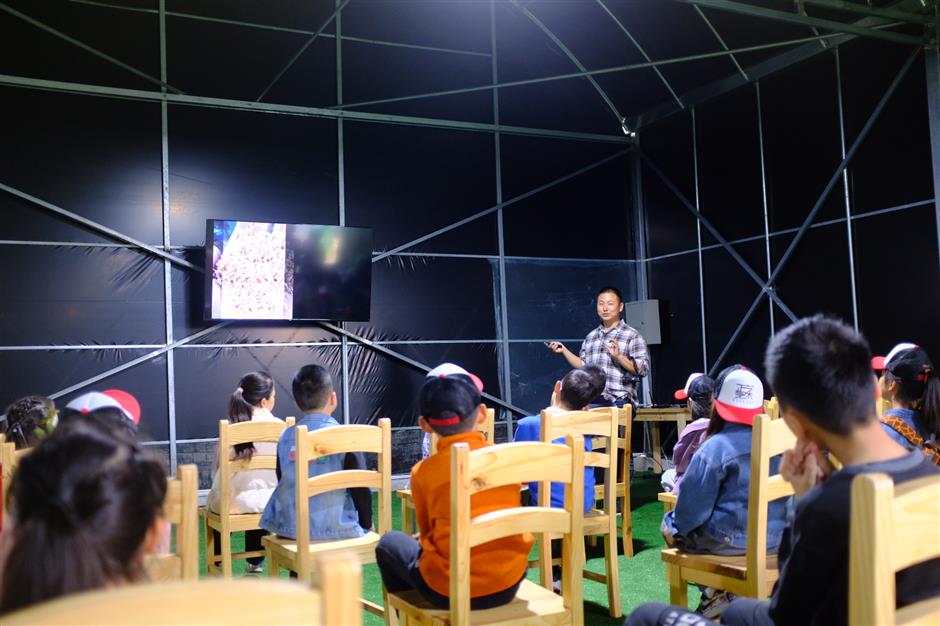 Young students listen to Lu as he delivers a lesson on agriculture at his fruit and vegetables cooperative to broaden their knowledge.