Journey into the past at Juqi Antique Market

You have to learn the jargon to make yourself look like a veteran at the Juqi Antique Market on Lingshi Road. If not, you would be seen as a rookie and lose the haggle battle.

"One yuan" implies 100 yuan, and "3.5 yuan" is actually 350 yuan. No one knows how and when this jargon became popular at the market, but it is a sort of hidden rule to match wits with the vendors. 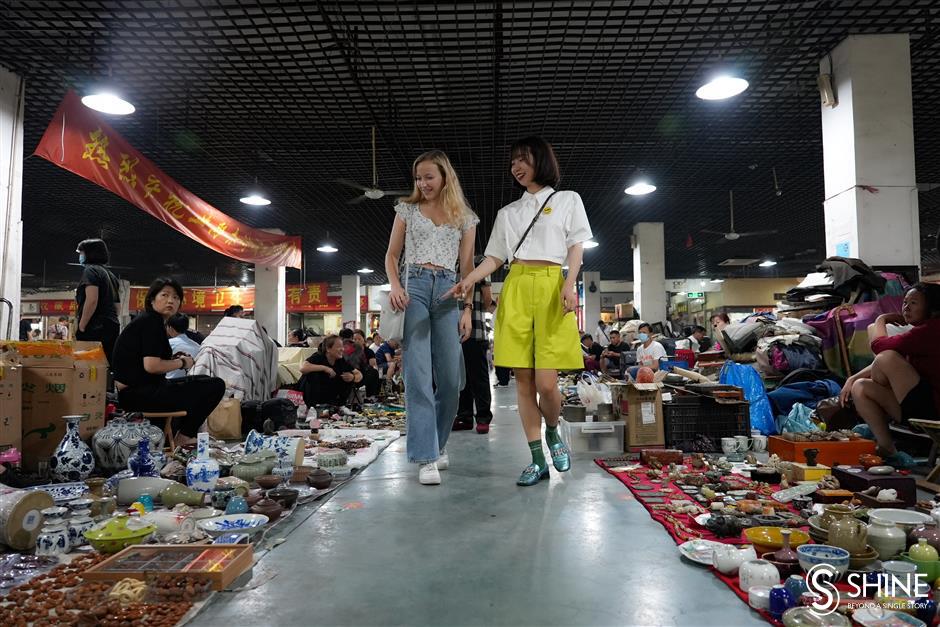 As Shanghai's biggest and busiest bazaar opened every Friday morning, the Juqi (literally treasure gather) Market covers two floors and sells anything you can and can't imagine.

Early birds catch the worms and the earlier you come the better deals you might get. Otherwise, you have to choose among the leftovers. 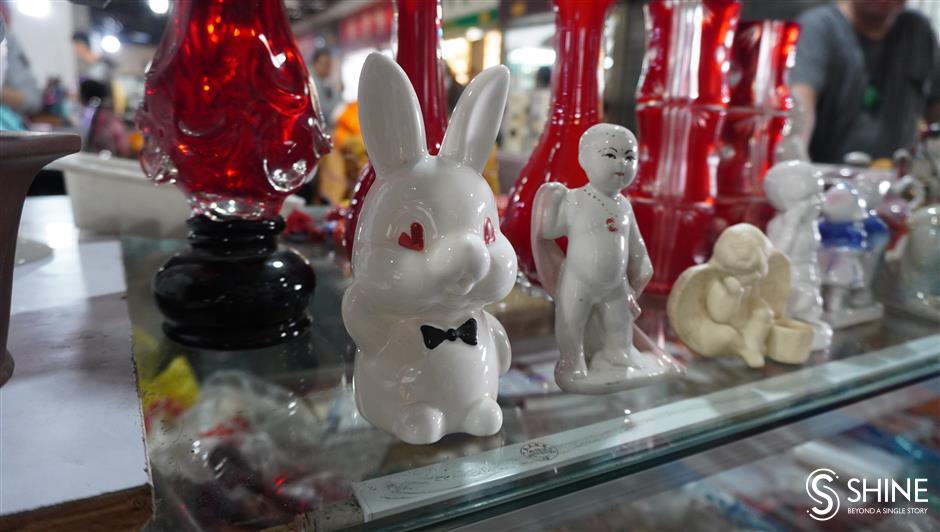 Lovely porcelain figures are also on sale at the antique market.

At 5am every Friday the market is already thronged with all kinds of visitors, some hunting for treasures at low prices, others simply idling away the morning after retirement and some posting the scene on social media.

"Some are serious customers and some come just for fun. We can spot them in a glance," said Qin. She and her husband from Henan Province have rented a stall here for six years. They regularly go back to Henan to collect antiques to sell at the market. "Customers in Shanghai have a stronger purchasing power," she said.

Stalls have their goods spread out on the ground, including porcelain, jadeware, toys, old books, family photos and furniture. Treasure or trash, it all depends on a buyer's knowledge and bargaining skills.

Be brave and offer half the price and wait for the vendor's reaction. If a flat rejection, you can raise your offer a little to test the water. It's a fun, brain-stretching game that combines luck, keen observation and a bit of psychology.

There are frequent quarrels. A price is agreed, but then one party regrets it and refuses to sell or buy. Swear words are hurled back and forth, but verbal abuse seldom becomes physical.

Take care when walking through goods sprawled in a jumble on the ground. Once a careless customer stamped on a vase and had to pay 2,000 yuan in compensation. If the vase was worth that price, only the vendor knew. 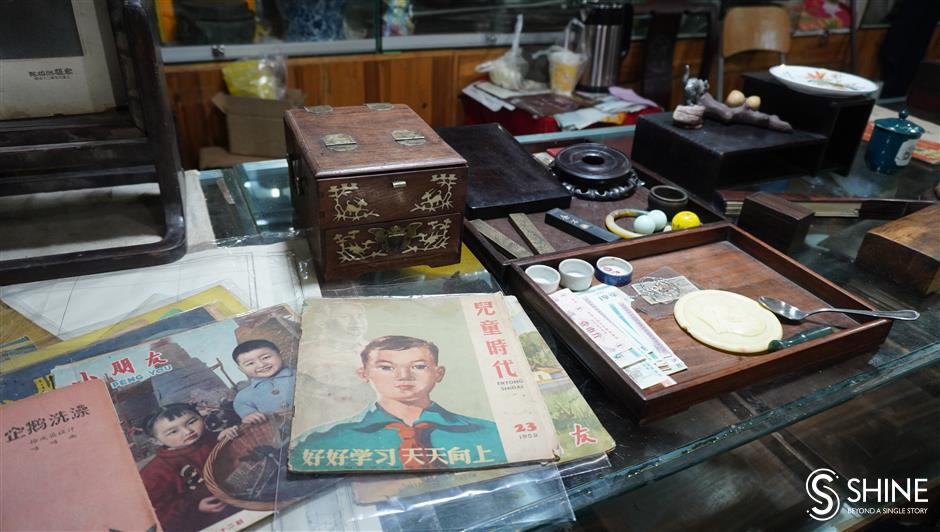 Zhou Dexing, 65, has been a regular customer for many years. He comes to kill time in retirement and hunt for some bargains at the same time. His latest was a second-hand saxophone, which he haggled down from 1,900 yuan to 1,000 yuan. "For a saxophone beginner, it's good enough," he said. "Playing the saxophone is an expensive hobby and I have to save my pension for lessons."

Xu Yunshan, 52, is crazy about collecting old-fashioned cassette radios. "I was struck the first time when I heard beautiful music flowing out of that little box," he recalled. "But I was only a teenage boy in a poor family when those radios were imported to China."

Xu's dream of owning a cassette radio are finally realized today. From a Sharp 777 to Sanyo 4500, he has a full list of classic models from 1980s. "There is no regret for that little boy four decades ago," he said.

Dong Yining, who loves collecting old cassettes and records, shares the same memories. He was only 15 years old when he heard the songs of Taiwan pop singer Teresa Teng (1953-1995). She sang about romantic love, her sweet hometown and the joys and sorrows of adolescence in a tender voice. "They were so different from the forceful songs of revolutions we had always heard before," Dong said.

He has been collecting Teng's albums, posters and CDs for years, and become fascinated with pop music and rock'n'roll. "She's my muse, who enlightened me to pop culture and the music world, and her songs always recall my youth," he said.

The times progress constantly, embracing new things and leaving the old behind. But there are always people who are nostalgic for the past.

Photographer Wen Zhang, 47, pays regular visits to the market for old family photos and letters, and he has spent a lot on his collection. Most of the photos and letters were thrown away as rubbish during the city's relocation projects.

"A family's history was eradicated in the urbanization process. It's human nature to abandon the old for the new. It's sad," he said. "What I'm doing is to keep the memory of how we ordinary people lived in the past."

He once bought a complete family album for 500 yuan. It recorded the life of a Shanghai woman named Wang Yue'e. From her girlhood in Nanyang Middle School to years spent in Xinjiang to answer the national call to "support the borders" during the 1960s, from her wedding party to retirement and with her grandchildren. "She was nobody special, but she witnessed the whole process of China's development. It's the past we should keep today for the future," Wen said. 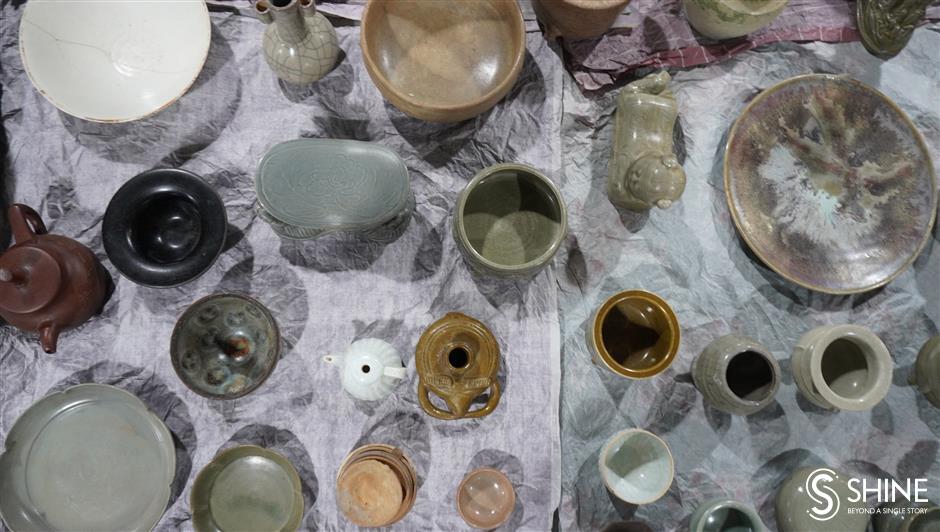 ﻿
Special Reports
﻿
61908
,
Journey into the past at Juqi Antique Market
Animal adoption as of July 1
Moments in Jing'an District in June of 2021
Ordinary building with an extraordinary past
Proof you're never too old to be a pin-up girl
National honors for district's young people
Professor's crusade to protect 'historical witnesses'
Cafe echoes iconic Swiss timepiece's Art Deco flair
The artist who caused a panic attack
A lived-in space with views and a feeling of openness
EXPLORE SHINE