Making a will is not usually on the bucket list of Chinese people, but dying without one can create all sorts of family strife.

That's why Tian Yan is so dedicated to her job.

She is the director of the Shanghai No. 2 Office of the China Will Registration Center, dealing with about 20 clients a day. She advised them on the legal process and helps them with the paperwork. Most of the people she sees are between 40 and 60 years old.

The former kindergarten teacher and company treasurer brings a compassionate personality to her job.

"Patience, with a loving heart, is as important as legal knowledge when doing this job," the 39-year-old says.

For each client, Tian must first determine if they are competent under the civil code to make a will. A series of tests looks for mental health issues, such as bipolar disorder or schizophrenia. Clients who pass the tests then fill out an application form for will registration and wait three days for approval.

Those who finally complete the process receive a certificate as a proof attesting that they have a legal will.

The service is free for people 60 years and older, who own a house of less than 140 square meters. Other clients are charged a fee according to the value of their assets.

"The entire procedure is done with transparency," Tian explains. "We record everything on camera. We also take a client's fingerprints and information for facial recognition to confirm their identities." 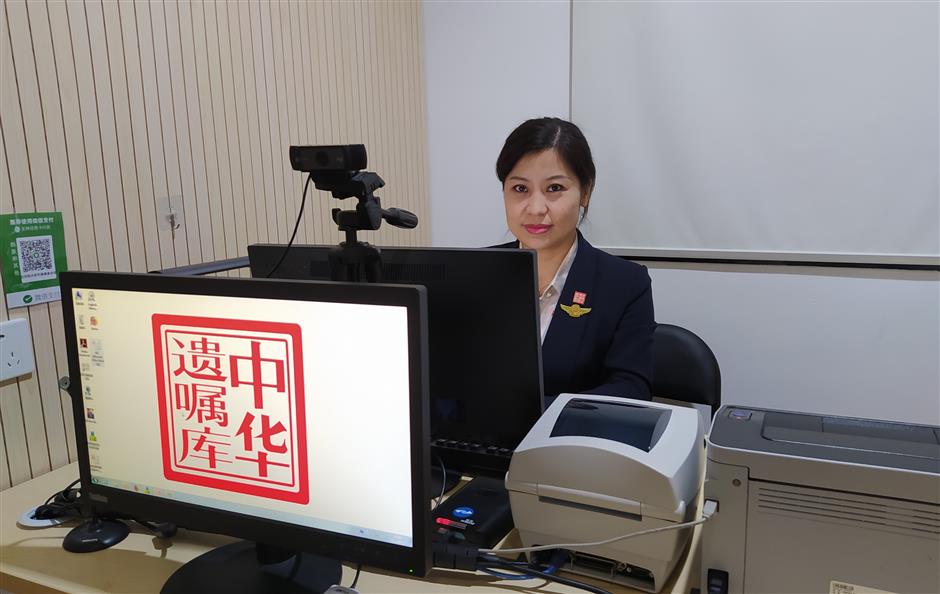 Tian Yan in her office

Tian became a will consultant four years ago. She says she saw employment ads for the center and decided she needed a change of work environment. After three months' training on law and consultation skills, she passed a series of exams and became certified for the job.

Her family didn't oppose her career change, but at first they were loath to talk about it with others because making a will is "death related."

In fact, it is that traditional bugaboo that keeps many senior citizens from making wills. Some consider it inauspicious or even cursed. But younger generations are more open-minded.

"Nowadays, people have more assets than in the past, and they believe that making a will and final testament will maintain a harmonious relationship among surviving family members and protect people they care about," Tian says.

She cites one case as an example.

The client was an old woman, who had lost her husband and then her only son. The husband died intestate, leaving a condominium in his name. His widow lived there until advanced age made it inconvenient.

"She wanted to move into a home for the elderly but she needed to sell the condo because she couldn't afford the home fees on just her pension," Tian says. "But her daughter-in-law and grandson didn't agree with her."

According to the law, the woman and her son's family shared ownership of the condo and would have to share any income from selling it. And without a will of her own, the grandson would inherit the condo when she died.

But the woman had other ideas.

"She had a niece who looked after her much more than her daughter-in-law and grandson, so she wanted to make a will bequeathing her share of the condo to the niece," Tian says. "She told me: 'I don't want to leave the world with the feeling that I owe anyone, and my niece deserves everything I want to give her.'"

The story had a happy ending. The old lady made a will, and the niece paid the fees for her to go to a home for the elderly. The registration center kept the contents of her will secret so that she and her niece wouldn't cop any trouble from other family members.

Founded in 2013 in Beijing, the non-profit will center is supported by the China Aging Development Foundation and Beijing Sunny Senior Health Foundation.

Chen Kai, a lawyer and founder of the center, is also the director of the Sunny foundation.

The idea for the center was inspired by the legacy lawsuits of several celebrities, which provoked nationwide attention. One involved the family of the late crosstalk star Hou Yaowen (1948-2007).

In 2007, Hou suffered a heart attack and died intestate, leaving assets of more than 80 million yuan (US$12.4 million). He was married twice, with both ending in divorce. He was survived by two daughters, one 27 and the other 10.

The elder daughter filed a lawsuit against Hou's brother, Hou Yaohua, who is also a crosstalk star, seeking a share of her father's legacy. The case dragged on for 18 months and was eventually settled out of court.

In another case, Chinese painting master Xu Linlu (1916-2011) died, leaving a handwritten will and an estate valued at 2.1 billion yuan to his wife.

His six children, however, contested the will, claiming it was forged, and sued their own mother. One of the sons said he was afraid their mother would give all the legacy to her favorite child. The lawsuit went on for nearly five years. In the end, the handwritten will was deemed authentic and legal.

Center founder Chen says a legally drawn up will can avoid the kind of dramas that pit family members against each other.

"We are really busy," Tian says. "Apart from receiving clients, we also study new laws, such as the Civil Code issued last year, and we are always seeking ways to further simplify the procedure."

She says her own family is very supportive now. They aren't afraid anymore to talk about her job with friends, and they even promote the idea of legal wills to people.

"They say that I'm 'accumulating merit' and will be blessed," she says.

﻿
Special Reports
﻿
Heirs: Where there's a will, there's a way
Rejuvenated water town Sijing opens its refurbished relic sites to visitors
Discover the thrills and spills of life under the sailing mast
Expressing the order and rhythm of space in ceramics
Don't like your nose? Try musical makeover
Lancôme mines longevity science for next generation skincare
You can enjoy a ski run in the city, even if the snow isn't real
Robots prepare to take over local stadium
All keyed up to pursue multitude of talents
Onitsuka Tiger unveils retro-inspired fall/winter collections
EXPLORE SHINE