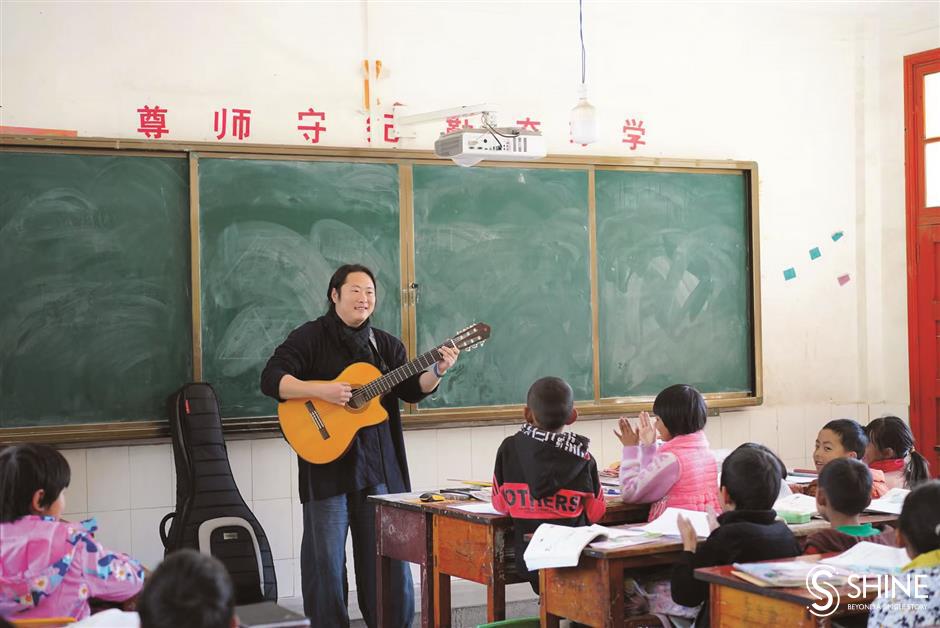 "My eyes were filled with tears when those kids rehearsed with me," said Mingyu, one of the artists who participated in an aesthetic education project. "They are so talented and learned the song in a second. Their angelic voices and enthusiasm are so contagious and healing." 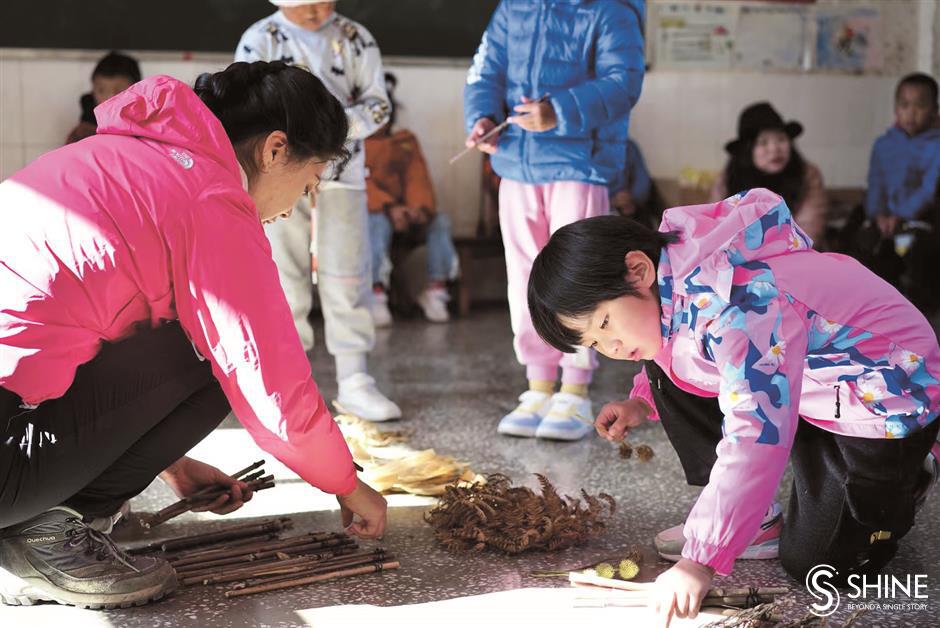 In late October, the Shanghai Helin Art Promotion Institution, a nonprofit organization, held an 8-day event at the foot of Laojun Mountain in Lijiang. Mingyu, two illustrators, Li Qinqin and Yao Wei, local teachers and professionals from various fields attended the event, and designed an aesthetic course consisting of painting, music and storytelling for local students in Liju Village. 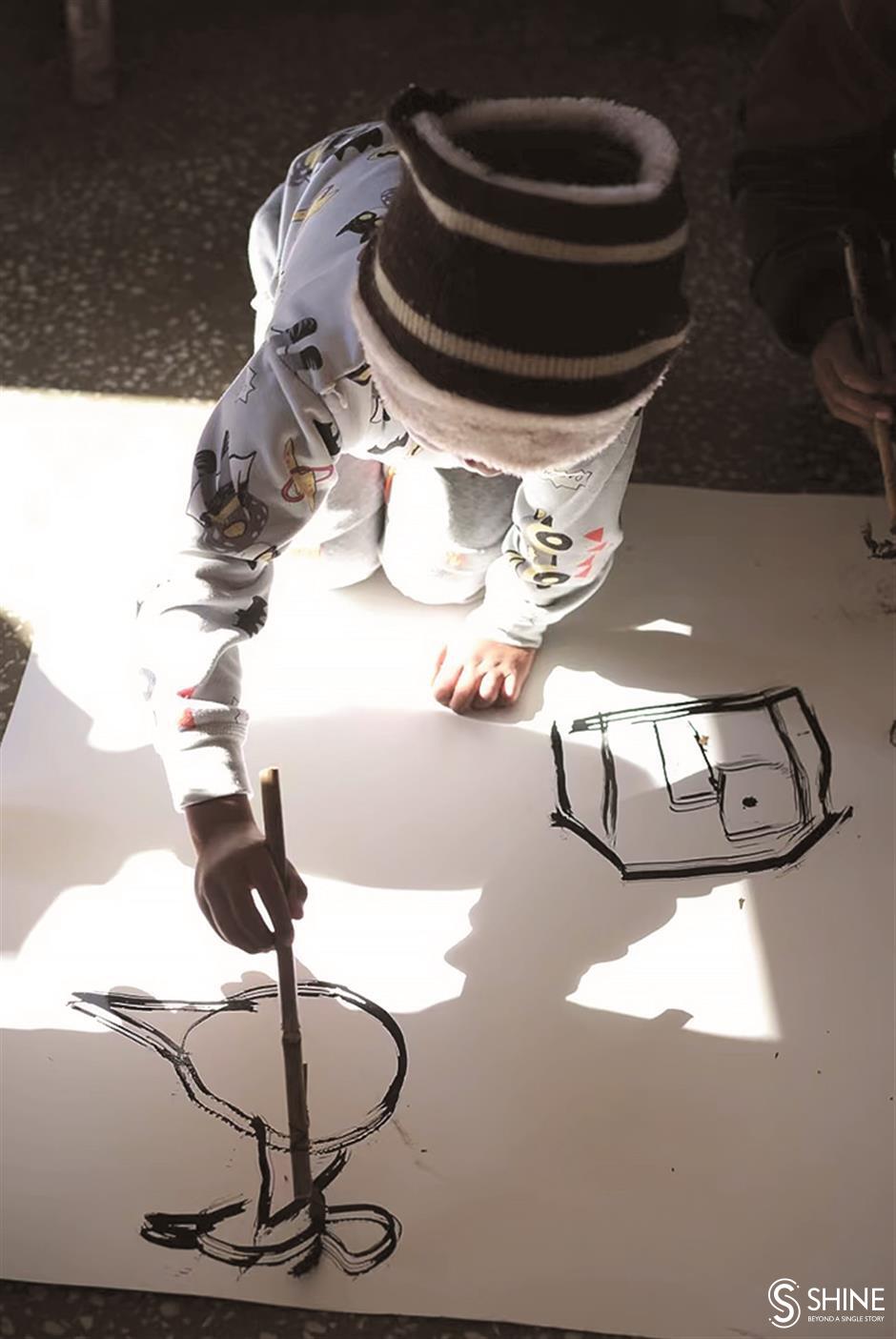 A student paints on the rice paper.

Before sitting down for a curriculum design session, Shanghai Daily went on a guided tour to the observation camp on Laojun Mountain led by three local residents: Zhang Fang, president of the Yunnan Snub-nosed Monkey Range-wide Protection Network & Nature Center, Li Ruxue, wildlife protection consultant at the center, and He Jixian, Dongba ("wise man" in Naxi language) at Wumu Village in Yulong Naxi Autonomous County. Later, we visited the homes of local villagers from the Pumi and Lisu groups in Liju Village, Yunnan's hidden backcountry gem. 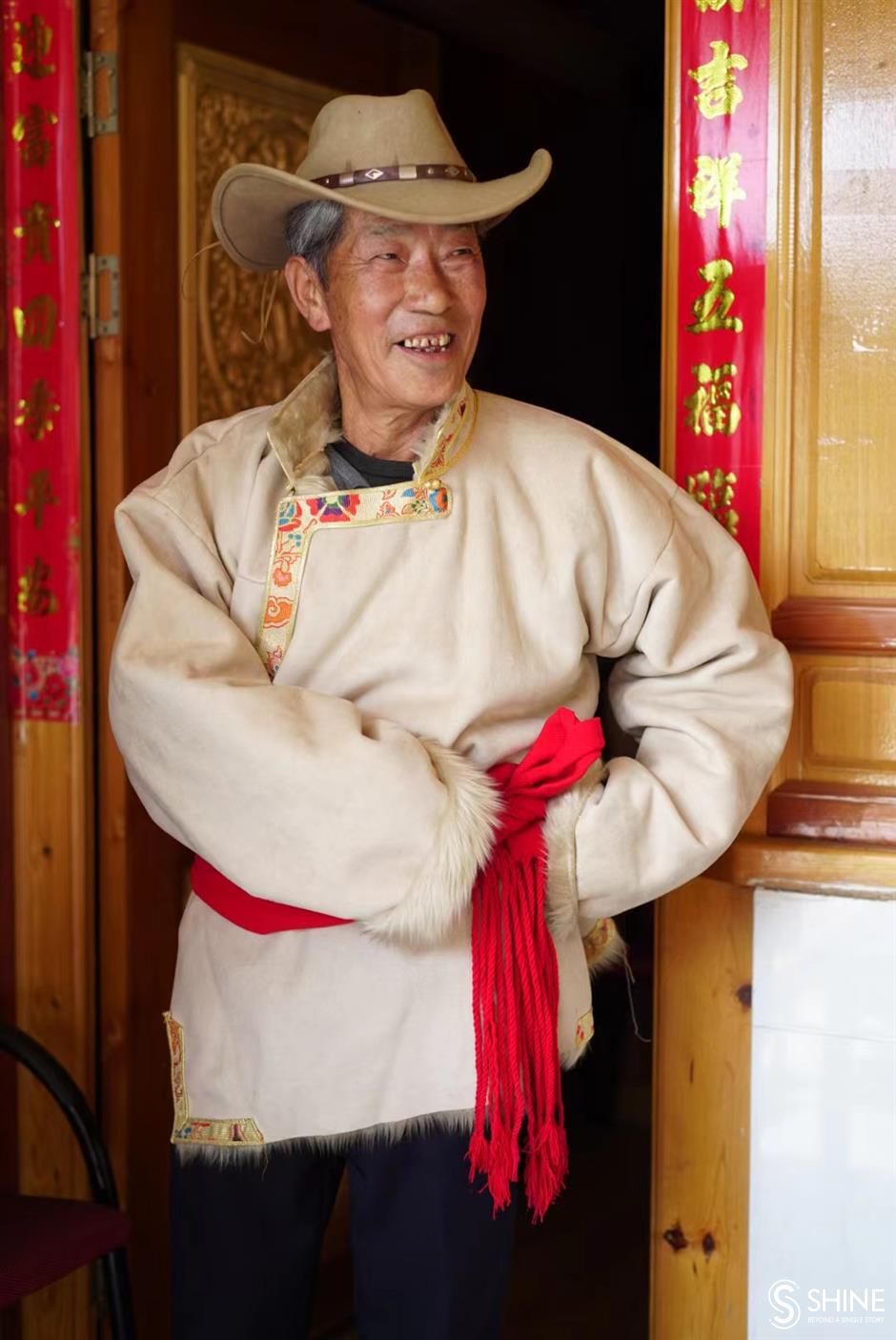 Local resident of Liju Village Xiong Shiqing, 70, is from Pumi ethic group and can speak languages of four other ethnic groups of Bai, Lisu, Naxi and Han.

The eye-opening experience ignited inspiration for the three artists. To make the curriculum more enjoyable for local kids and students, it is based on a story about Yunnan golden monkeys, dubbed the second national emblem of China along with pandas. 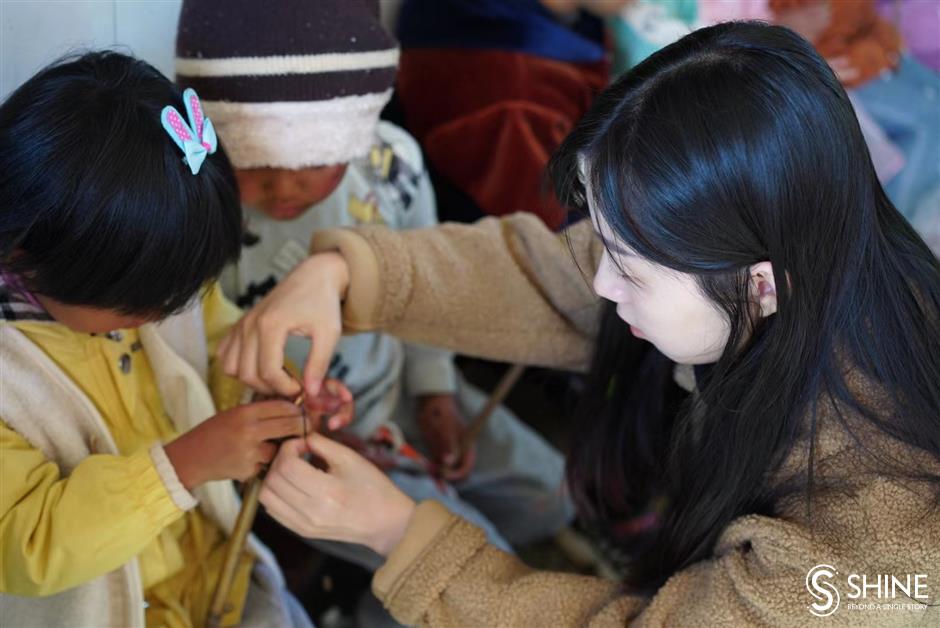 Once upon a time, there was a group of Yunnan golden monkeys living a peaceful and free life on Laojun Mountain, the core scenic area in the Three Parallel Rivers of the Yunnan Protected Areas (Jinsha, Lancang and Nujiang Rivers) – until one day a group of hunters trespassed and encroached on the land. Before the monkeys were forced to leave their home, the most respected member in the group left a scroll with the secrets to finding them, which serves as the content of the aesthetic courses. 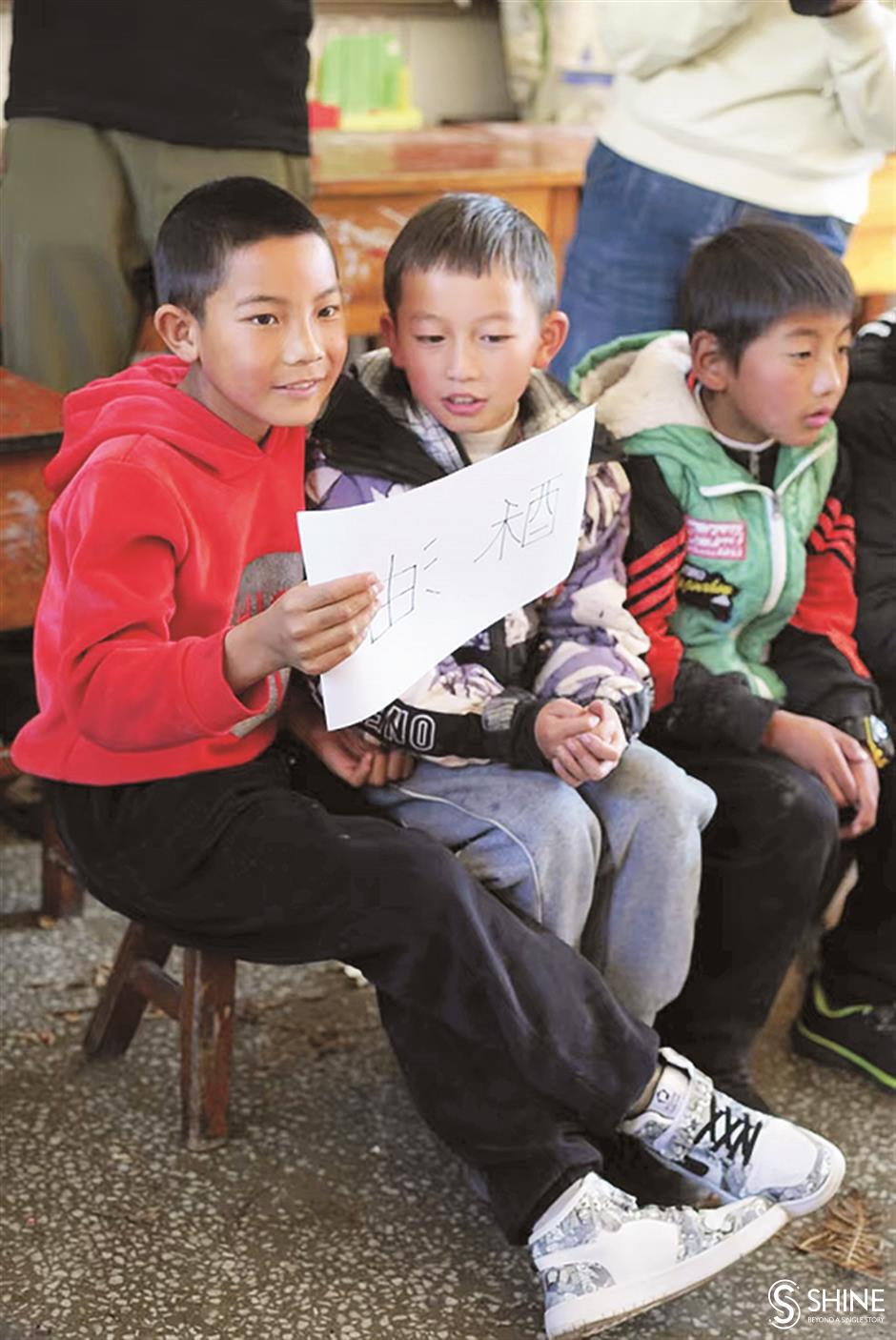 Kids at Liju Primary School listen carefully to the teachers.

After opening the scroll, the very first step is to trace the natural environment. Qinqin serves as a messenger for the elder monkey who left the scroll. Earlier this month in the trial session at Liju Primary School, she brought bamboo sticks, tree branches and leaves for the students, and encouraged them to make their own brushes with special storks and draw freely on the rice paper with ink.

"The innocence in kids' works is rarely seen in adults' lives," said Qinqin, a picture book author based in Xi'an in northwestern Shaanxi Province. "As a creator, I hope kids can indulge themselves in making art and get inspired from nature and their lives."

Then comes the color of nature, where Yao and the kids shared their DIY collage art ideas using natural materials like flowers, leaves, lichens and tree skin, and created elements such as yak butter, bamboo baskets and daggers. 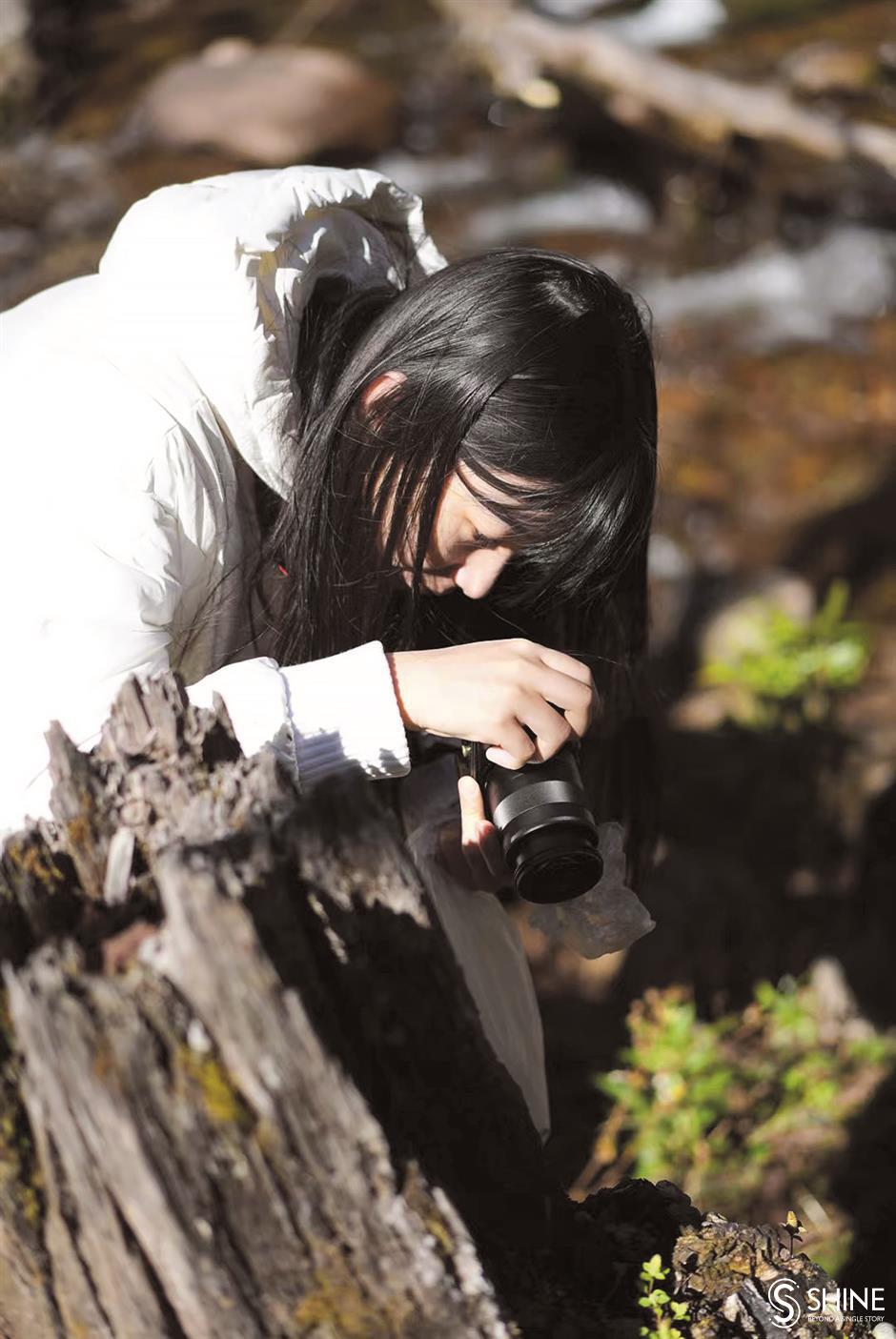 Yao Wei takes a photo of plants on the Laojun Mountain.

"Getting in touch with nature fills my heart with joy and inspiration," said Yao, an independent creator living in Hangzhou, Zhejiang Province. "And those kids were born with creativity and vitality, just like those evergreen plants in nature. Born and raised in this beautiful landscape, they are very familiar with nature and can effortlessly make art masterpieces."

And with Mingyu's music session, for which we brought instruments – including drums, flutes, sand hammers made of plastic bottles discarded by visitors on the mountain, dried corn, disposable dishes and bamboo – the students gradually restored the monkeys' habitat and brought them back. 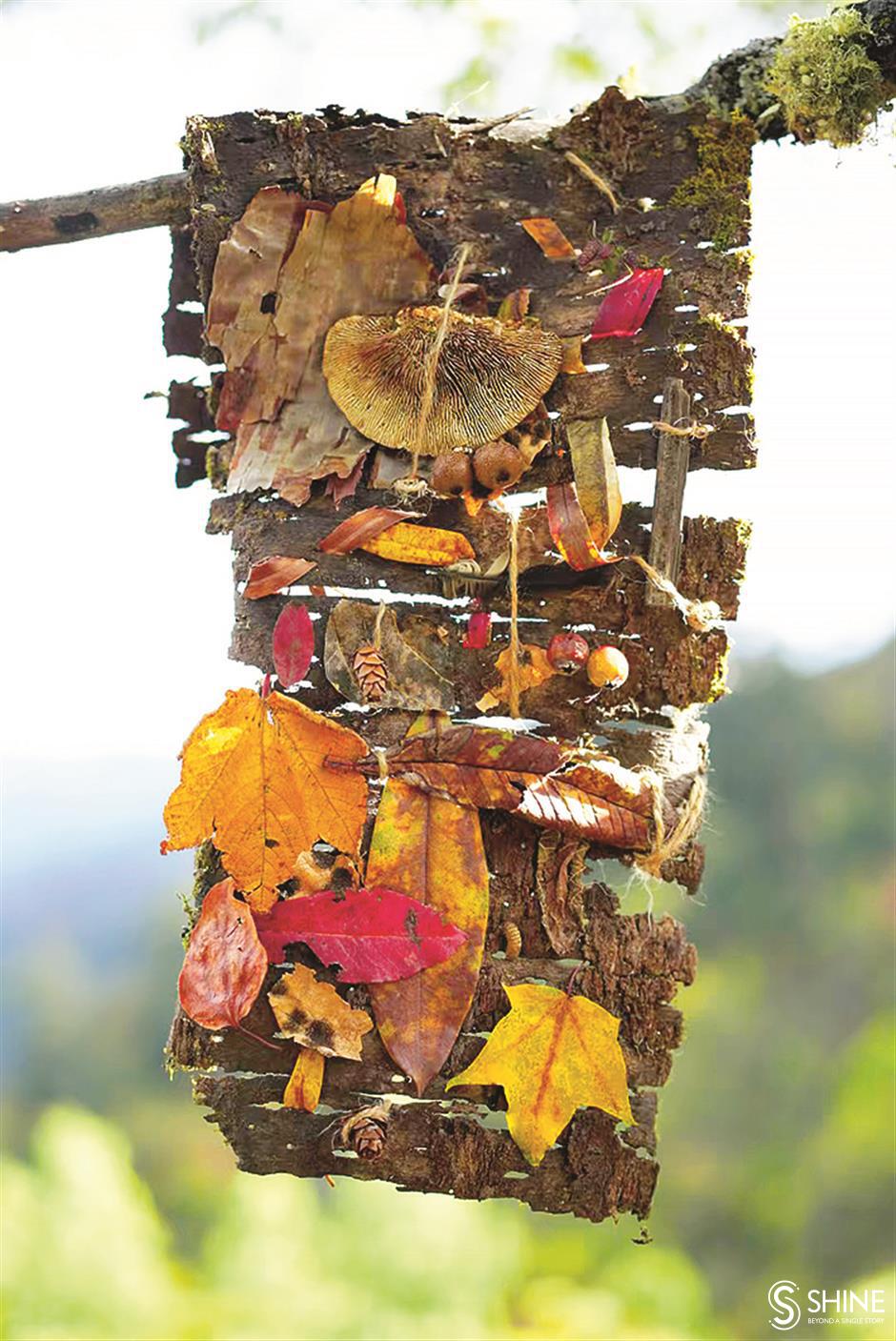 A piece of art made by Li Qinqin

Due to our consumption of media stories about current events and fascination with urban culture, rural China's cultural narrative and plight are often out of sight. Wang Dengfeng, an official with China's Ministry of Education, called for strengthened training programs and information technology applications to tackle the lack of educational resources in rural and remote areas, and improvements in physical and aesthetic education at primary and middle schools in these areas.

Numerous institutions and organizations are helping close the gap and enhance aesthetic education in China's remote areas. Shanghai-based Hyline Charity Foundation, which focuses on intangible culture protection and promoting art education among China's students, initiated a long-term project in 2019, striving for better aesthetic educational experiences for kids in the countryside. According to Lina Ren, a foundation council member, more than 30 schools have benefited from the project. Hyline Charity Foundation hopes to extend the curriculum to 200 schools across the country in the next two years. 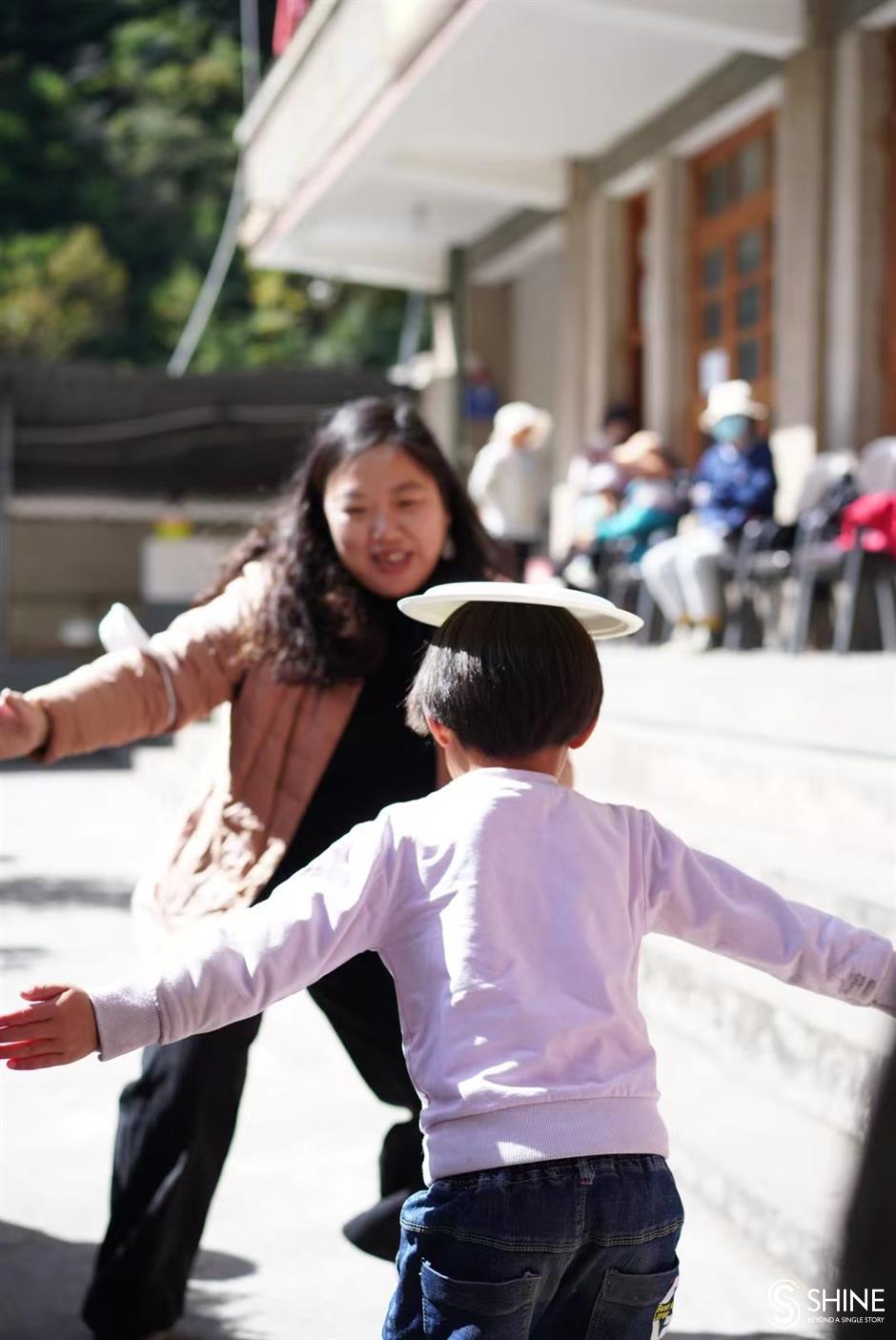 "Aesthetics are vital in formal education," said Han Lu, chief director of the curriculum design. "Students can take art as a channel to express their opinions and ideas. I hope that through this curriculum they find they can realize their potential in this area, and perhaps choose art as a career in the future."

In order to create a more culturally appropriate curriculum for students at Liju Primary School, where the majority of students are from the Naxi ethic group, the Helin Art Institution invited He, a Naxi shaman responsible for the spiritual wellbeing of his tribe and the Naxi culture inheritor, to help the team better fit into local communities.

He is essentially a priest who can be called upon to perform rites and rituals when necessary. Before the curriculum design session, he organized several free summer camps and workshops for local students, consisting of dance and vocal classes as well as gaming sessions. 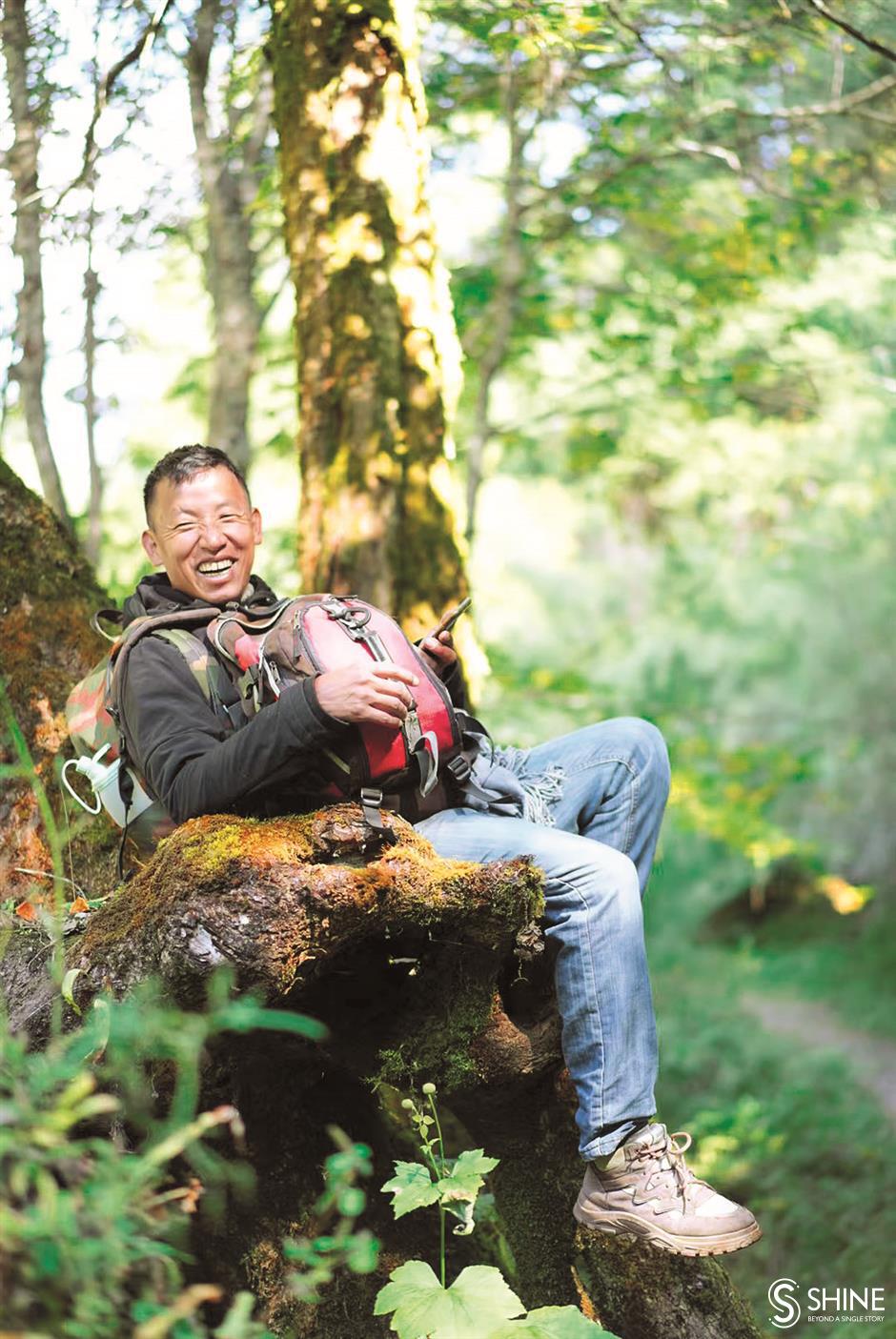 However, He noted this is the first time he has taken part in a systematic course design for aesthetic education.

"Prior to this experience, I never truly learned what our kids really want and need," said He. "Naxi culture is glorious and full of diversity, but the way we have promoted our culture is out of date. I learned from this event that with different presentations, it is easier for our kids to acquire the essence and tradition of Naxi culture."

"Culture for ethnic groups is ever-changing, and we need to follow trends to better protect and inherit the culture," he added.

Four local teachers, all from the Naxi ethic group, had little experience with aesthetic education, but it gave them heart after the trial session and exchanging their ideas with teachers and artists across the country. 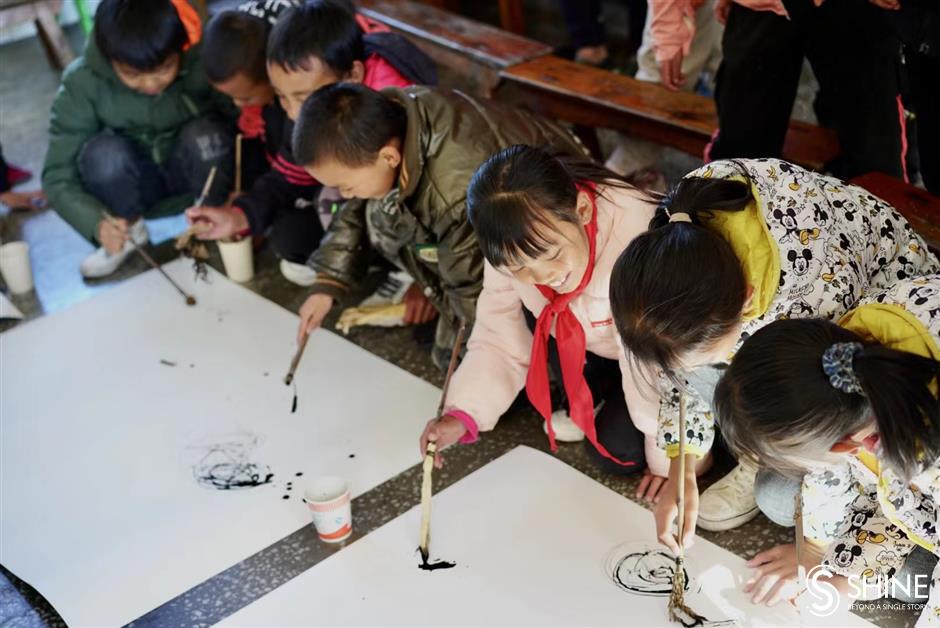 "I realize I'm capable of developing an innovative course like this," said He Xiangquan, a Chinese teacher at Lijiang Baisha Primary School. "I enjoyed every single process of the course design, and in the future I hope this course will be widely applied."

For Qiu Shuimiao, an educator dedicated to countryside education, the aesthetic courses are not only for students but also a remedy for local teachers.

"I put myself in the shoes of those local teachers, and I don't think I'd be as good as they are since they encounter so many difficulties," said Qiu. "I hope they can detach themselves from this plight through art. Not everybody is an artist, but we can all be creators and experience artmaking."