Temple is where Indian prince started Zen lineage in China

Shaolin Temple's reputation is well earned with its fighting monks and kung fu practice, attracting flocks of tourists and martial art lovers over the decades.

However, sitting quietly in its shadow, about 2 kilometers northwest on Songshan Mountain's Wuru Hill is Chuzu Temple, Henan Province's oldest wooden structure built about 900 years ago, and the best, and only, example that strictly followed the officially acknowledged architectural rules of the Song Dynasty (960-1279).

The temple was dedicated to Bodhidharma, a prince in south India who came to China as a messenger to deliver Zen Buddhism about 1,500 years ago. Bodhidharma went deep into Songshan Mountain and meditated in the caves for nine years.

It is said that he sat facing a wall the entire time, letting his legs wither away. For a meditator, the biggest enemy was sleep. Legend says that Bodhidharma once fell asleep while meditating, and was so furious he cut off his eyelids. His eyelids fell to the ground and became the first tea plant. Tea was thereafter supplied to monks to prevent from sleeping.

About 600 years later in 1125, local monks set up Chuzu Temple to commemorate this brave traveler on a long trudge, who brought Zen to China. On a stone stela built in 1605, its carving read: "This temple was the place where our founder of Zen Buddhism practiced meditation."

The main hall with three courtyards on the compound's central axis, as the earliest existing wooden building in Henan, has important historical and artistic value. The four octagonal stone pillars that support the front eaves are embossed with patterns of pomegranates, straws, birds and musicians, while the four posts in the hall feature reliefs of the heavenly kings, dragons and goddesses. 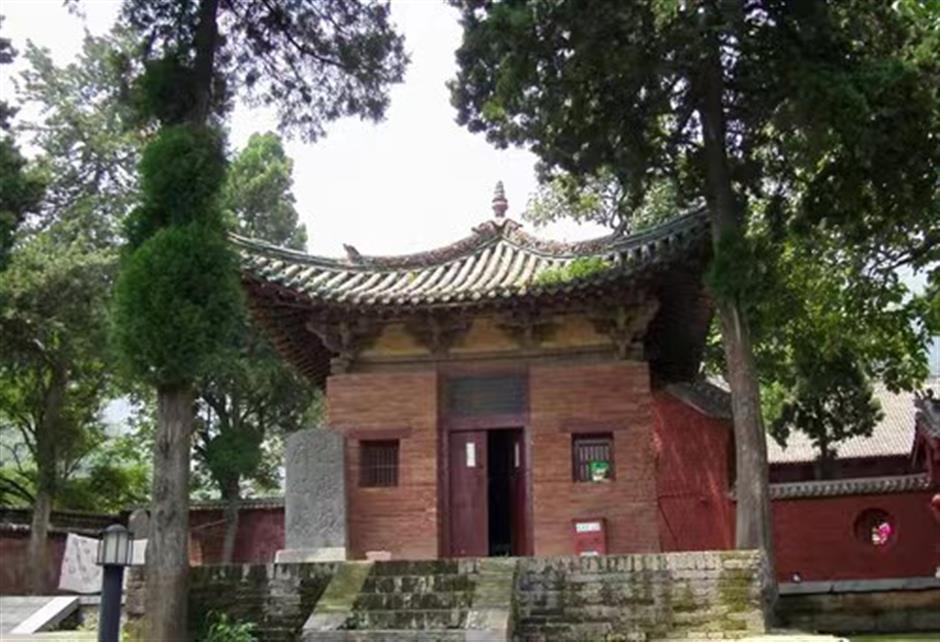 The eastern and western walls were painted with murals of Zen Buddha master portraits from different generations, each marked with their original names, Buddhist names and birthplaces. Many carvings of flowers, lions, landscapes, bridges and boats in seawater tell the stories of how master monks were devoted to spreading Buddhism over the centuries.

The main hall is a sacred shrine for Bodhidharma, and the statues of the second to fifth inheritors stand on two sides.

The second ancestor Huike, a Chinese monk, came to Bodhidharma on a cold winter day while he was meditating. Huike pleaded to become his student, but Bodhidharma didn't acknowledge him. To show his determination, Huike cut off his arm at the elbow and presented it to Bodhidharma as an offering.

He stayed and followed Bodhidharma for many years, who formally named Huike his dharma heir. This is historically known as the original Zen transmission from Bodhidharma, the first patriarch of Zen to the second, marking the beginning of the Zen lineage, an unbroken line that continues today.

At the temple's front gate, there is an 1,800-year-old cypress tree, much older than the temple. The tree, a silent watcher, probably witnessed the first Zen ancestor meditating there, taught Buddhism to his disciples and brought inner peace to those who came to pray.

Hidden deep in the mountain, Chuzu Temple and the cypress tree were cut off from the steady flow of tourists rushing to nearby Shaolin Temple.

The brick-carved couplet on the front door reads: "The 28th progenitor, who traveled to the East Land (China), opened Shaolin." It means Bodhidharma, the 28th generation student of Sakyamuni, was the first Zen ancestor, and built Shaolin as his Zen practicing home.

The sound protection of Chuzu Temple is attributed to the government's efforts, but more importantly, to the Monk Xingxia from Shaolin Temple.

In the 1960s, experts from the national cultural relics bureau visited to create a preservation plan. At the time, Shaolin Temple had only a few monks and barren farm land. Xingxia saved good food and water for the experts. He went up and down the mountain several times a day to cook meals for them and left quietly.

After the plan was made, Xingxia voluntarily packed his things and moved to live in Chuzu Temple as a doorman. He meditated, practiced Zen and recited sutra alone in the temple for two decades.

The untrodden temple on a small hill had no roads. Xingxia, in the most primitive and clumsy method, paved a path to it by picking up small stones from the river at the foot of the hill day after day. He later died in the temple. There are stone tablets for each abbot, but Xingxia left no records there. The silent guardian of the temple passed away without a historical trace.