Every summer, there’s a silent war of ice creams.

In 2018, the winner of wanghong ice cream was the black-colored Coconut Gray ice cream cone.

In 2019, the ice cream everyone raved about was the cartoonish-looking double yolk that highlighted the public’s favorite salted egg yolk flavor.

And this year, strange and surprising are the key words for the new batch of trendy ice creams that are battling head-to-toe for the most popularity.

2020 is a fun year for ice cream lovers, the dazzling new releases include upgraded (and more expensive) classics, icy interpretations of nostalgic snacks and drinks, and strange flavors that would make a person frown.

The word exotic isn’t enough to describe some of the new ice cream products.

Priced at 8 yuan (US$1.12), the milk with squid ice cream looks ordinary and harmless, only there are many tiny pieces of salty dried squid meat mixed in the cream.

To describe the flavor of this bizarre combination, the milk ice cream and squid are equally distinct, one is not overpowering the other. When the ice cream melts in the mouth, the chewy squid bites stay, and the flavor becomes stronger. Every bite is a repeat of the experience and, thankfully, the milk ice cream part isn’t squid-flavored.

The strange combination gained very mixed reviews, with many people against the idea of combining a not only salty, but fishy ingredient with sweet cream. The squid does have a prominent taste and it lingers for a while after finishing the ice cream. But those who enjoy eating squid snacks and stronger-flavored seafood are finding the ice cream a success. 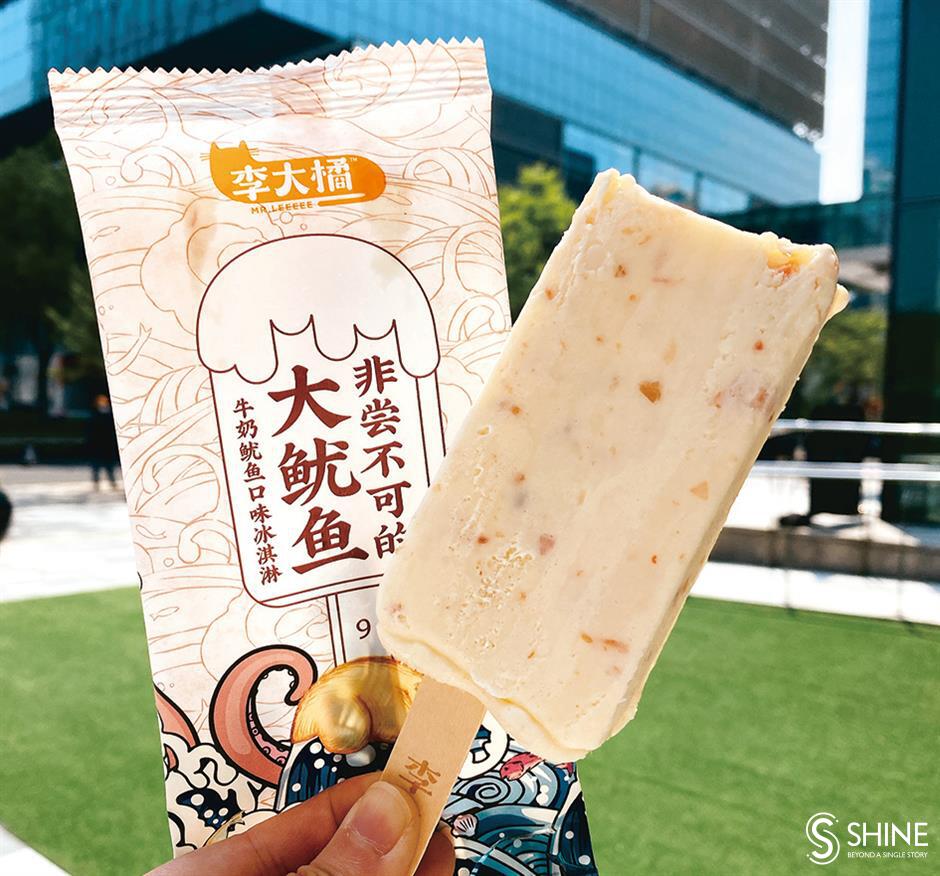 Milk and squid isn’t the only “fishy” ice cream this summer. Ao Xue, the company that created the double yolk ice cream last year, has brought out a crab roe milk ice cream (6 yuan) that is shaped like a cute crab and combines cheese flavor ice cream with actual crab roe flavor. It’s a strange sensation as the crab part does taste like eating hairy crab with vinegar.

The competition continues with iron wok stew ice cream (9.5 yuan) from Ao Xue, which is a milk ice cream with meat floss and chives, it even has a black bowl and beige lid made of waffle to simulate the wok. The flavor of this ice cream is not sweet, as the cumin and chives are quite strong.

The German Schwarzbier-flavor ice cream from Colladon (5.8 yuan) is shaped like a beer bottle with a top made of chocolate and beer filling. The creative launch was praised for the rich flavors of beer and rye as well as different layers of textures.

Baxy has a “Taste of Ultimate” ice cream box, it has three flavors less popular in China: wasabi, durian and mint. Though mint ice cream is a staple in the West, it isn’t a classic ice cream flavor in China and only a few brands have mint-flavor products.

Stinky tofu ice cream actually only has the look of stinky tofu but not the flavor, the ice cream itself is cheese and soy milk.

But most of the new ice cream launches this summer are normal, refreshing and delightful.

Peach is the trendy newcomer of fruit ice creams this year and it’s often paired with oolong tea flavor, which is light, fragrant and not as bitter as other teas. Baxy’s peach and oolong ice cream has a gentle coral pink color and creamy texture, while Meiji’s is a popsicle made of peach jam and juice, it has a crunchy ice shell and creamy filling with cheese. 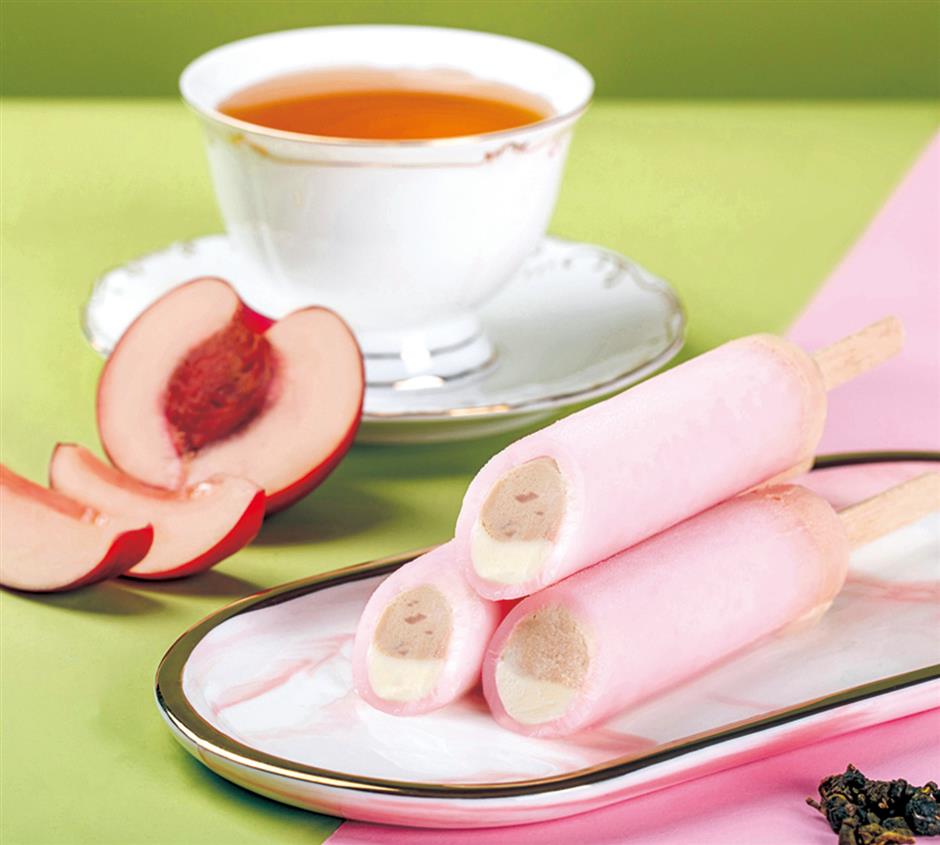 Heytea has partnered with Wall’s to launch two beverage-inspired ice creams, and one is a peach-flavor sorbet with cheesy cream top.

Ice cream cubes sold in plastic tubs is a great packaging idea. Last year, Siaphya’s cubed ice cream in flavors of milk and rum with raisin was quite popular. It was sold in a regular plastic food container with each family-sized box containing 450 grams of ice cream. The cubes are easy to eat with a fork, saving the trouble of scooping out ice cream with a spoon and making portioning much easier.

Little Seven is a new brand that has launched two cubed ice cream flavors this summer, a classic chocolate and a lighter elderflower. The container of Little Seven is reusable, the deep, square box is microwave-safe and can be a convenient way to store leftover meals.

The possible downside of cubed ice cream is that it melts faster and can lose its shape at room temperature. 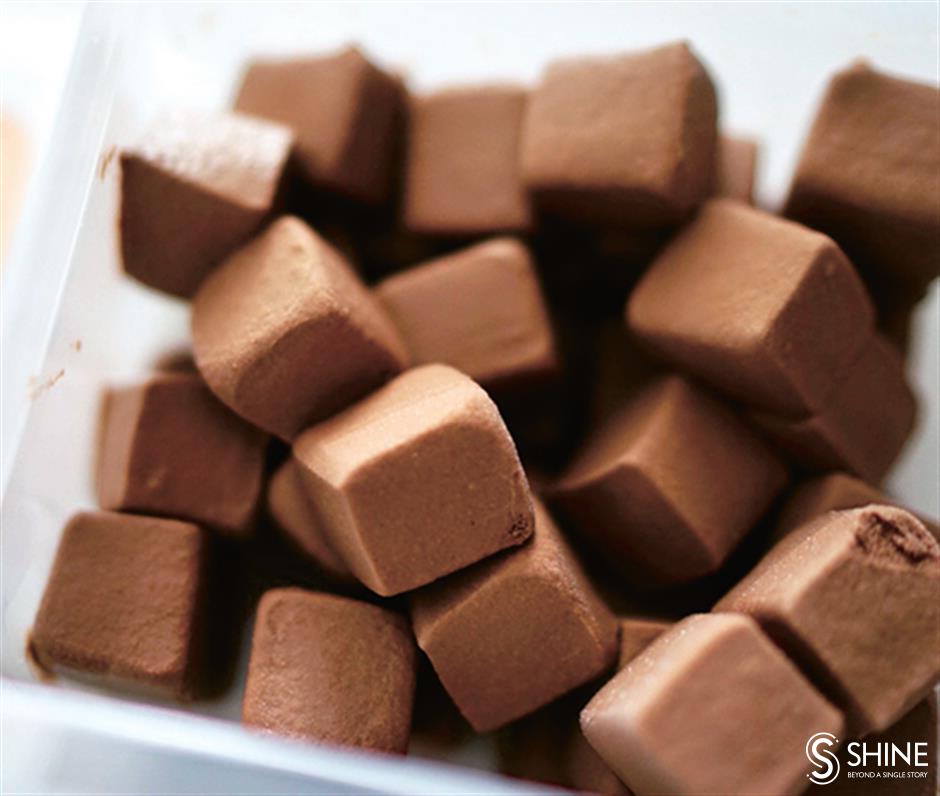 Collaborations: Everything can become ice cream

Collaboration is a hot trend in this year’s ice cream market as food and beverage brands seek ways to turn their most famous products into ice creams.

Chicecream has launched a special flavor partnering with AD milk drink, a nostalgic sweet milk beverage popular in the 1980s and 1990s. The ice cream, priced at 15 yuan, has an outer milk ice cream layer with flavors of the AD milk and a fruity filling of orange and lemon jam. The ice cream is delicious, especially the sour and refreshing filling, but it doesn’t have a distinct flavor of the AD milk.

Chinese sodas came back strong last summer by making the tradition fashionable. The Arctic Ocean Company, or Beibingyang, is known for its tangerine soda packaged in vintage glass bottles. The company has created an ice cream version of the tangerine soda, as well as nostalgic popsicle flavors such as red bean, mung bean and cream that are paper wrapped, just like the old times. A bag of six popsicles from the Arctic Ocean Company is about 30 yuan.

Chocolate brands Dove and Snickers have also launched an ice cream version of their most popular chocolate bars — Dove has a chocolate covered vanilla ice cream bar while Snickers’ ice cream has peanut butter and caramel. Both are very sweet, just like the original chocolate bars.

Mengniu Dairy has teamed up with baijiu (white spirit) brand Jovo (Jiangxiaobai) to create chocolate ice creams for adults, including caramel and peach flavors. Both have alcoholic filling and the shape of the ice cream actually looks just like the Jovo bottle.

For example, Dove’s chocolate ice cream, which only weighs 50 grams and has nothing special besides the chocolate packaging, has a retail price of 14.9 yuan — compared with Magnum’s chocolate-covered vanilla ice cream (64 grams) that retails at 8 yuan.

The interesting thing is that Dove’s chocolate products are actually on the cheaper side, but the ice cream has a mid to high-range price tag.

Heytea and Wall’s ice cream retails for 15 yuan (80 grams), compared with other ice creams from Wall’s that are priced at 25 yuan for 290 grams (the Oreo flavor).

The Mengniu Dairy and Jovo ice cream is 16.8 yuan per piece, while regular chocolate ice cream from the same company is 3 to 9 yuan.

Ice cream from brands such as Chicecream and Zhongjie1946 are using higher-quality ingredients and are better designed. These brands are also investing heavily in marketing to reach target consumers who are willing to pay more for better ingredients while making the products fashionable. The simple-looking ice creams are sold for 12 to 20 yuan depending on flavor, and there are constantly creative flavors to attract attention.