No rules to making delicious soup

A traditional Chinese dinner isn’t complete without a soup dish, which can be a simple vegetable soup or sumptuous chicken soup. Hence the Chinese expression of describing the size of a meal as number of dishes, soup and staple separately, like four dishes, one soup and one staple.

Soup is flexible territory in Chinese cuisine, there are no exact rules on how to make it, and every household can have their own favorite and exclusive recipes. Enjoying a meal with soup is not only delicious, but also aids hydration and digestion.

This week, we’ll explore the quick soups that are nutritious and can be ready in minutes with basic ingredients available at cheap prices. 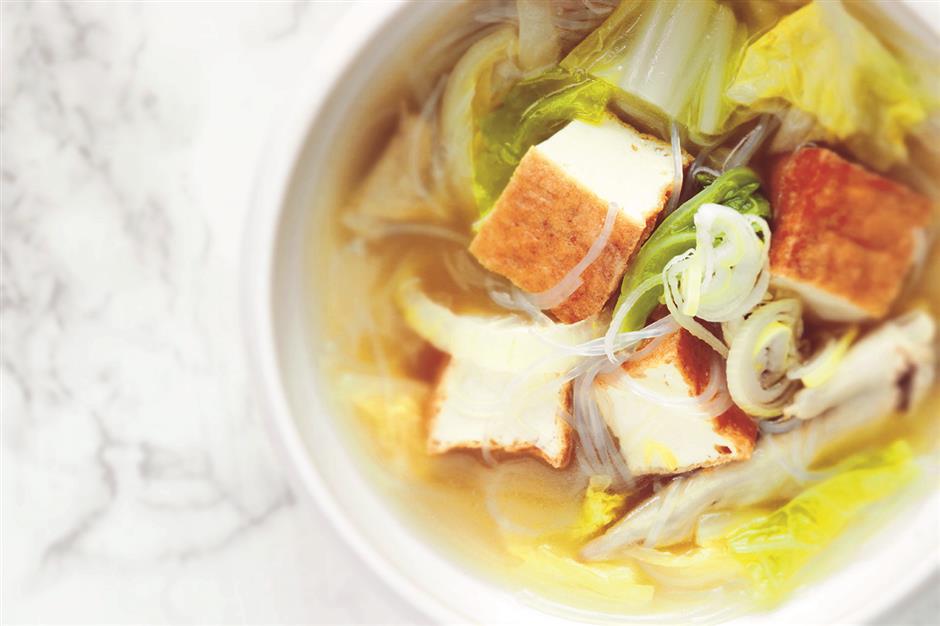 A tofu and Chinese cabbage soup that fries the tofu first for richer taste.

Quick Chinese soups are mostly made from vegetables, which take less time to cook and don’t need top be stewed for hours like chicken, pork bones or oxtail.

The most common Chinese vegetarian soups are the three simple egg drop soups — tomato egg drop soup, spinach egg drop soup and nori egg drop soup. Cook the vegetables in water and pour in the beaten egg right before turning off the heat. But there are tricks to greatly improve the soup and avoid having a flavorless bowl of vegetable water.

To make the perfect egg drop soup from just one egg that is dense, floating and blooming, the secret is the starch water. The proportions are about half a tablespoon of cornstarch in 400ml of soup. When the water or soup is boiling, add the starch water (diluted in 100ml of water in advance) and stir. It shouldn’t be too thick or thin, and when it’s boiling again, pour in the egg in a thin stream and a circular motion. Avoid pouring it all in the same place, then stir a few times with chopsticks and turn off the heat.

With tomato and spinach, the first step is cooking the vegetables in some oil before adding water to make the soup. But with nori, it’s simply adding the dried nori in boiling water and then making the egg drop.

For vegan soups that don’t use eggs, various soy products are the popular protein choices. Tender tofu can replace eggs in the simple recipes above, while the harder textured tofu that remains in a solid shape is great in tomato or mushroom soups.

Hot and sour soup is a local favorite, featuring shreds of shitake mushroom, tofu, black fungus, bamboo shoot and more. Lean meat or seafood can also be added for richness. The soup is packed with spices and condiments, such as white peppercorn powder, vinegar, soy sauce, sesame oil, peppercorn salt and oyster sauce.

Wensi tofu, a famous dish from Huaiyang cuisine that emphasizes knife skills, is made by chopping soft tofu into extremely thin shreds that could pass through the eye of a needle.

Beancurd noodles are thin shreds of tofu sheets and can be used to make soups as well. Packed with protein, these special noodles are usually featured in a meat-based broth like pork bones soup, but work really well in vegetable soups with Chinese cabbage, pea shoots and mushrooms. If you are very sensitive to the beany smell and taste, briefly blanching the beancurd noodles in boiling water can do the job.

Chinese vegetable soups sometimes feature a light staple ingredient such as cellophane noodles or vermicelli, which are less starchy and can soak up the flavor of the soup very well without making you feel too full. Adding a few slices of rice cake into the soup is also a great way to elevate the consistency aside from adding starch water to thicken the texture of the soup. 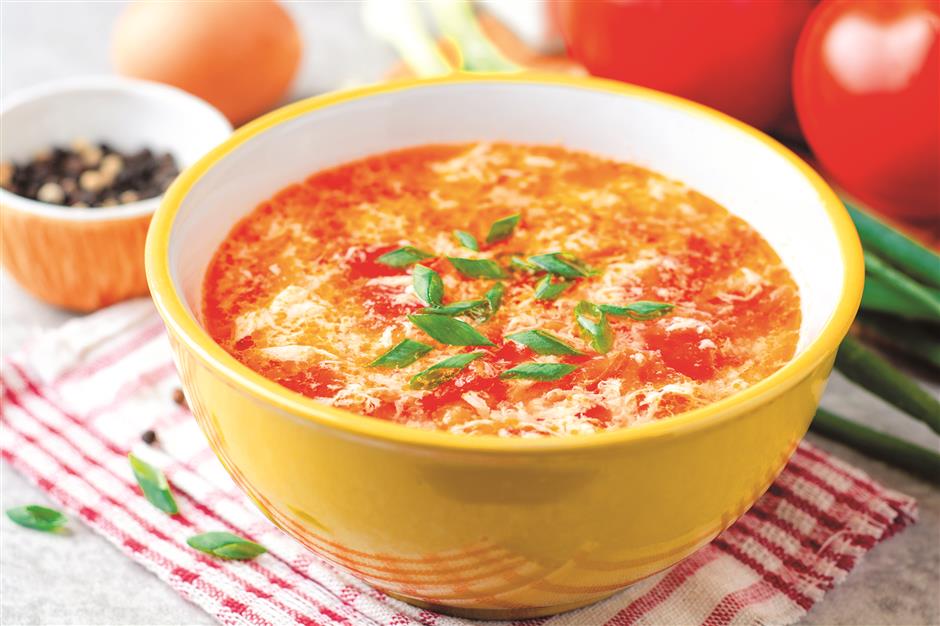 The fish and seafood soups

One of the perks of living in the Yangtze River Delta is convenient, affordable access to the excellent proteins harvested in freshwater rivers, lakes and the sea, and it takes little time to make delicious and healthy soups with tender fish, shrimp and clams.

Crucian carp soup, known as jiyutang, is a soup many Chinese people grew up eating. The freshwater crucian carp is a small-to-medium-sized fish with extra tender meat, and there’s one standard in judging the fish soup — the milky white color.

The basic crucian carp soup is a four-ingredient, two-step dish. Fresh fish, a few slices of ginger, oil, salt and that’s it. The milk-like color of the soup isn’t the result of adding milk into the fish soup, but achieved from the step of searing both sides of the fish in some oil after it’s thoroughly cleaned and patted dry (there’s a thin layer of black membrane inside the fish, it must be removed to eliminate the fishy smell and taste). The searing secures the skin, meat and shape of the fish to prevent the delicate ingredient from falling apart in the soup, and adding boiling water to the perfectly seared fish with a few slices of ginger is the second step.

For the first 10 minutes after adding boiling water, keep the temperature high enough so the soup stays boiling in the pot or wok — a Chinese soup-making concept is “high heat for rich soup, low heat for clear soup.” By the end of the 10 minutes, the soup should be very white in color already, and it’s time to switch down to a low heat and cover with a lid for another 10 minutes. Salt is added five minutes before the soup is off the stove, and many people prefer to season with a handful of finely chopped cilantro or scallions. White peppercorn powder can also add a hint of mild spiciness to the soup. 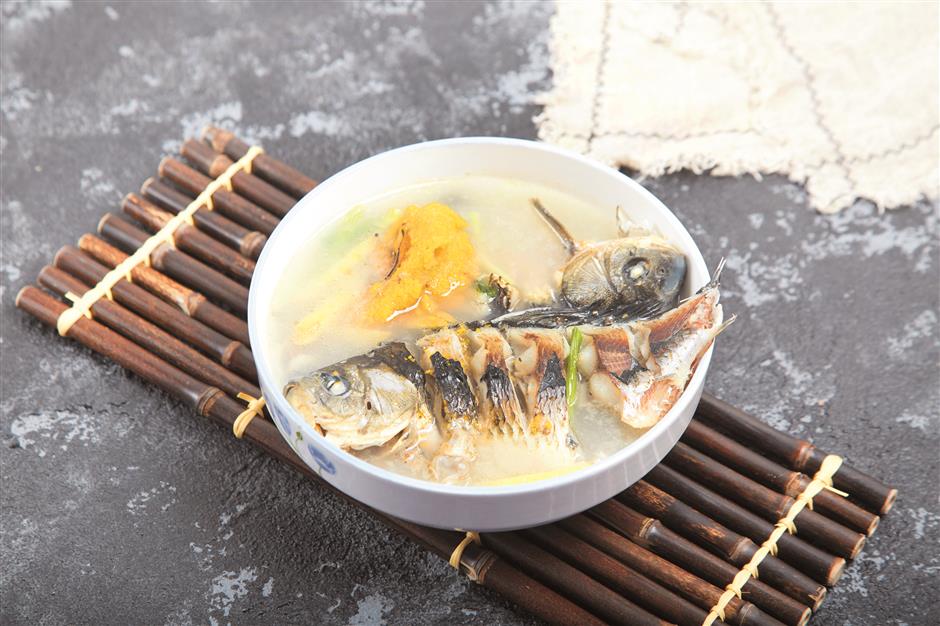 The crucian carp meat is naturally sweet, but the very messy fish bones make eating the fish a big challenge. They can get stuck in the throat in an unguarded moment. The meat of the fish belly and heat packs fewer bones, while the tail and back are really difficult for people who aren’t used to eating small freshwater fish.

Crucian carp fish soup with tender tofu is a classic combination. Medium-size cubes of tofu are added after 10 minutes of boiling the fish soup on a high heat. It’s crucial to avoid eating a bite of fish meat and tofu at the same time as that can raise the danger of swallowing fish bones.

Shrimp, on the other hand, are a hazard-free and easier ingredient to work with. Classic shrimp soup recipes include pairing the protein with tomatoes, green vegetables, winter gourd and mushrooms. To boost the flavor of the shrimp to a maximum, the first step is sautéing the shrimp heads with some oil and ginger before adding in the vegetables and shrimp tails. When the fragrance comes out, add water and bring to the boil. The sautéing and stir-frying process is essential to achieve an intensified flavor and avoid a soup with an unpopular watery texture.

With tomato soup, it’s important to stir-fry the tomatoes first with some garlic until the texture softens and the juice becomes sauce-like. It’s what brings the bright red color to the soup as well as the strong tomato flavor. Meatballs made of convenient shrimp paste (which is sold in supermarkets as a hotpot dish) can be used to make tomato and shrimp soup.

Clams are very cheap and usually cost less than 20 yuan (US$2.97) per kilo, and high-quality clams can make very delicious quick soups. The extra step in making clam soups is to boil the clean clams first in water with some ginger and cooking wine until they all pop open. The clams that remain tightly closed after boiling are bad and should be discarded. The open clams are then boiled with tofu, winter gourd or mushrooms to make light, umami soups.