It's sour, spicy and extra hot: time to test your adventurous spirit

The cuisine of Guizhou Province, known as Qian cuisine, is a unique culinary tradition of its own, and it takes an adventurous spirit to explore its full, vibrant flavors. 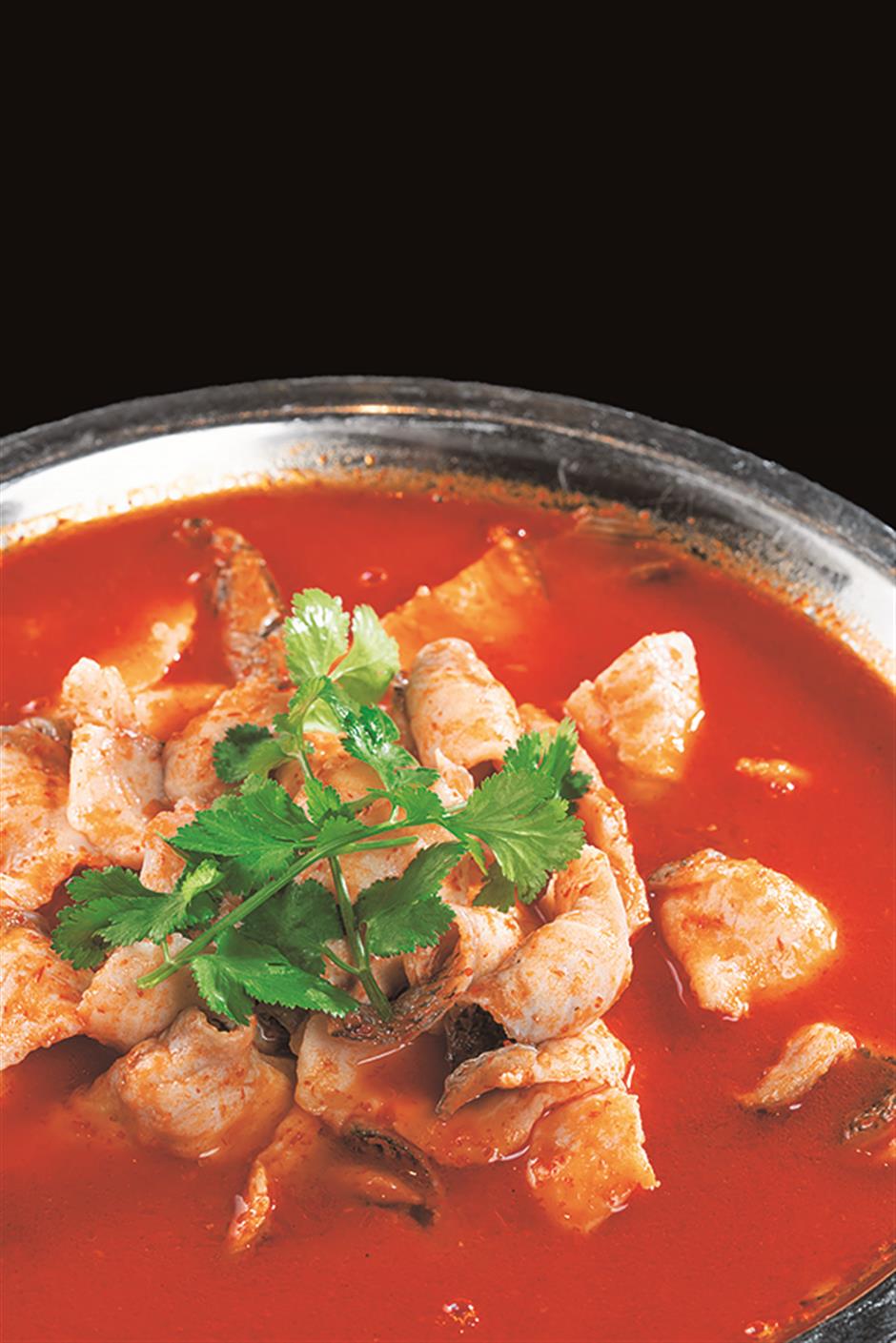 Guizhou-style sour soup fish in red soup made of tomatoes.

The people in Guizhou have an appetite for sour food, and pickled vegetables are seen everywhere. The extra sour pickled vegetables can stimulate appetite and digestion, especially relieving heat in the body during the hot summer months. The sour flavor from the pickles comes from natural fermentation instead of by adding vinegar, and the pickles can instantly elevate the flavor of soups, stir-fries and stews.

Suantang, or sour soup, is an integral part of Guizhou cuisine, and it's a culinary tradition of the Miao ethnic minority. It can be divided into two categories, the red sour soup and the white sour soup, and within each category there are also different varieties made with different ingredients.

The people in Guizhou believe in the health benefits of sour soups, as they contain enzymes, probiotics, prebiotics, lactic acid and other ingredients that are beneficial.

White sour soup is made with either rice or flour. To make baisuan with rice, boil the rice in water and pour out the rice soup after it starts boiling for a few minutes. The remaining rice can be then made into congee or rice. When the rice soup cools to room temperature, pour it into a clay pickle pot and add some original white sour soup as a starter to kick off fermentation. It takes two to three days to make the white sour soup on hot days and longer when it's a colder season. The sour soup can be used for quite some time and can be refilled with fresh rice soup as time goes by to maintain the "inventory."

A classic recipe featuring baisuan is the Guizhou-style white sour soup fish, which was featured in the third season of documentary "A Bite of China." It simply cooks the fresh river fish in the white sour broth with vegetables and seasonings, and can be served in hot pot style to cook more ingredients and enjoy with family and friends. 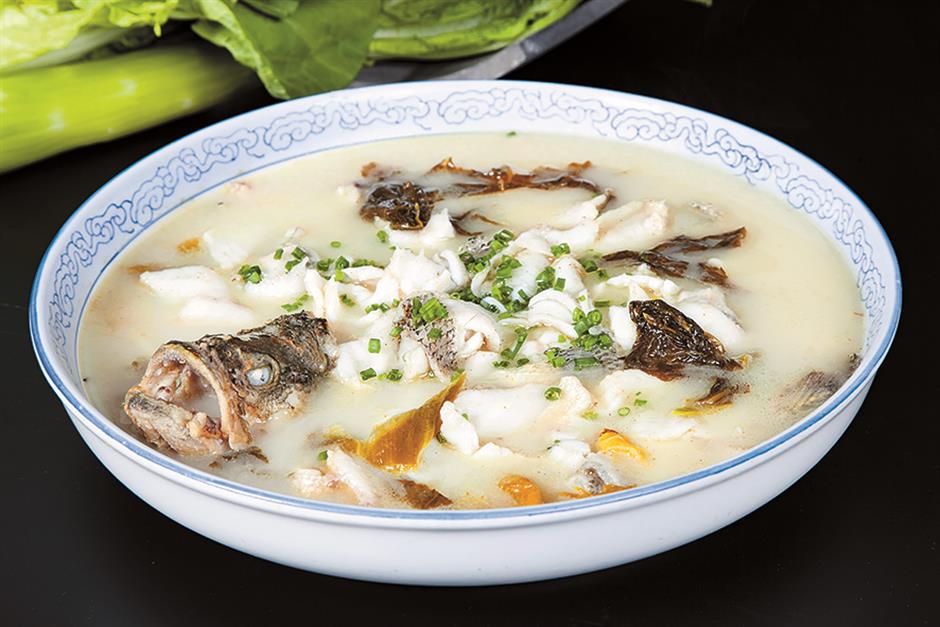 The white sour soup have natural sour flavors from fermentation, and the classic recipe is to cook fresh river fish in the sour soups.

The red sour soup, on the other hand, can be made with different ingredients. A classic hongsuan recipe is to use tomatoes for the flavor and color, together with tender ginger, garlic, red chilis, salt, glutinous rice flour and baijiu (white liquor).

After thoroughly rinsing the tomatoes and drying the surface, cut and pound the ginger, garlic and red chilis into a mash and mix in the salt, glutinous rice flour and baijiu to create a paste. Then smash the tomatoes and mix in the paste, seal in a clean, dry pickle jar and sprinkle some baijiu on top. The red sour soup will be ready in a month.

Kaili red sour soup is especially famous and popular, highlighting an intensely vibrant red color and strong spicy and sour flavors. The sour fish soup, one of the most well-known Guizhou dishes across China, is the pride of Kaili City. Restaurants often use the meaty carp for the recipe, and the fresh fish boiled in the red sour soup tastes spicy, sour yet refreshing, and can instantly boost a dull appetite.

Adding a large number of chilis and chili oil into the white sour soup can also create a spicy red sour soup. Meanwhile, shrimp sour soup is also a unique creation that mills small river shrimps and rice into a paste in a ratio of 2:1, then salt, baijiu, jiuniang (sweet fermented rice) and chili powder is added into the mixture, which is then fermented in a sealed jar for about six days in summer.

The shrimp sour soup has a stinky smell and taste that takes some courage to try. A classic stir-fry dish featuring this ingredient is shrimp sour beef. 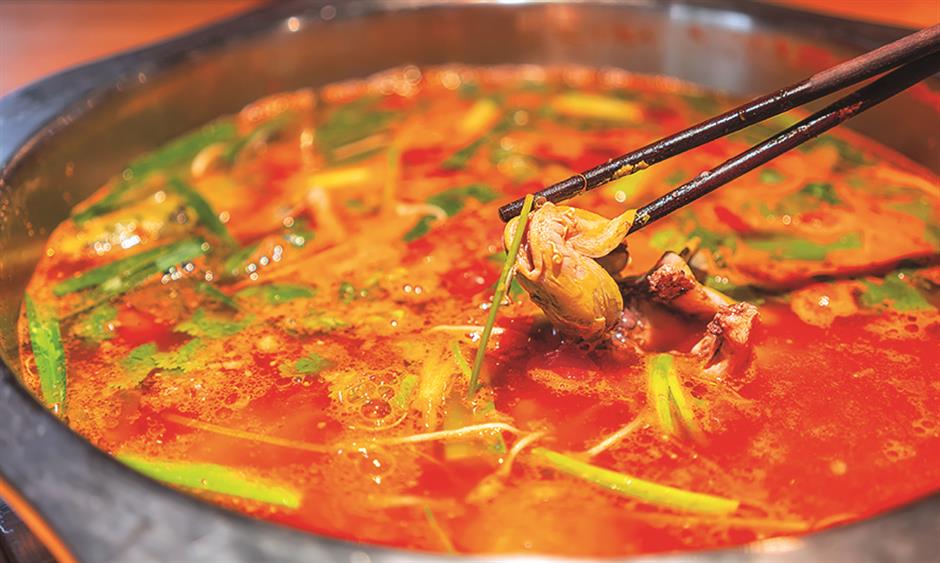 The spicy flavor in Guizhou cuisine is a pure spiciness with strong lingering heat. The province is a known production region of red chilis, and even when eating spicy dishes, the locals may dip the already spicy food in a spicy dipping sauce known as zhanshui, which can be seasoned dry chili powder, sauce or paste – it's a place where you would see someone dipping chili in chilis.

Ciba lajiao is a glutinous-textured chili pepper sauce made by grinding dried chilis harvested from Huaxi that have been soaked in water with tender ginger and garlic in advance. The condiment is the key ingredient in a number of regional specialties, such as Guizhou-style chicken with chilis, which stir-fries chunks of chicken in a lot of ciba lajiao and generous amounts of seasonings and spices, a must-have.

Zaolajiao, or pickled chilis, is a spicy condiment that can be used in the same way as doubanjiang, like in quick stir-fries and braised fish, as well as a base for zhanshui. The locals also enjoy adding zaolajiao in fried rice for the rich flavor.

Hulajiao is a roasted chili condiment made by baking dried chilis in charcoal and then pounding into a powder. It will have a unique strong burnt flavor and intense spiciness. 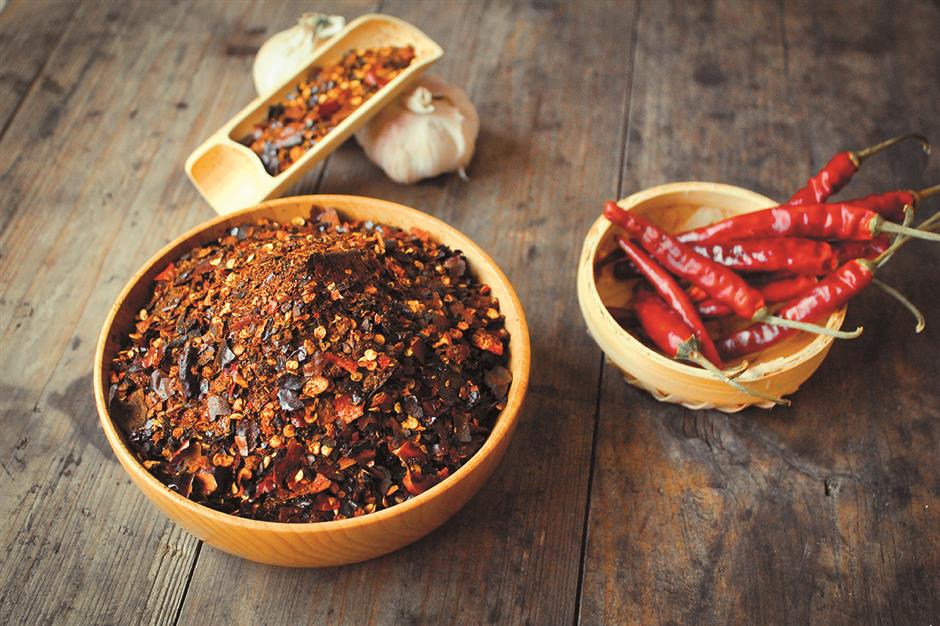 Guizhou cuisine is known for highly intense spicy flavors, and roasted chili condiment is one of the local signatures.

Guizhou is also known for its rice noodle dishes, particularly beef rice noodles in Huaxi, featuring a rich beef bone soup as broth, smooth rice noodles and superb beef, with a magic touch of sour pickles to balance the rice flavors. In Zunyi, the locals enjoy eating a bowl of extra rich and spicy pork intestine rice noodles known as changwangfen for breakfast, topped with bean sprouts and fried peanuts.

Guizhou cuisine is also known for using a lot of fish mint in cooking. Yuxingcao, a herb that translates into "fishy-smelling grass," has a nightmare smell and taste similar to raw fish. In Guizhou, fish mint is added in numerous dishes (from salads to stir-fries) and it's important to tell the servers to exclude the ingredient when ordering food if you really cannot stand the smell and taste. 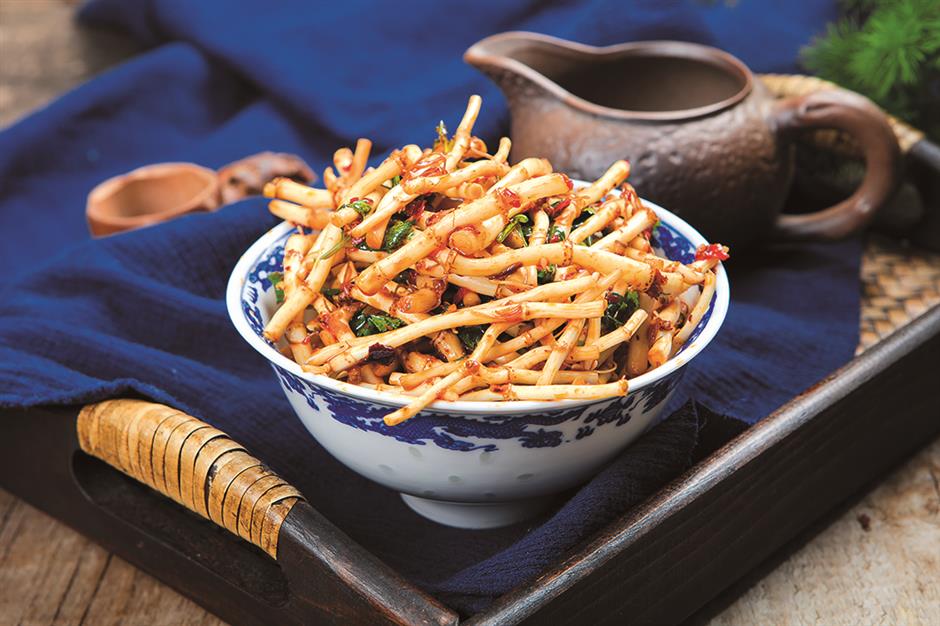 Fish mint is widely used in salads and stir-fries in Guizhou.

﻿
Special Reports
﻿
It's sour, spicy and extra hot: time to test your adventurous spirit
A no-frills Belgian bistro with a few twists
A swirl of unique sweet chills to beat summer heat
Cool tastes to beat the heat: gourds a gift in our humid summer
Jing'an feasts for foodies not to be missed
Get ready for summer fruits: don't mind the smell, just taste it
Enticing early summer food and drink menus around town
It's Hunan when some like it hot: spicy lure of a hot tourist attraction
La bella vita with pasta, coffee and wine
Iconic French patisserie expands with new venue
EXPLORE SHINE