As temperatures climb day by day, it's time for chilled delicacies that take little time in the kitchen and minimal cooking steps to stay cool in the heat.

And cold summer staples like cold noodles, liangfen and liangpi are becoming quite popular items on the menu. 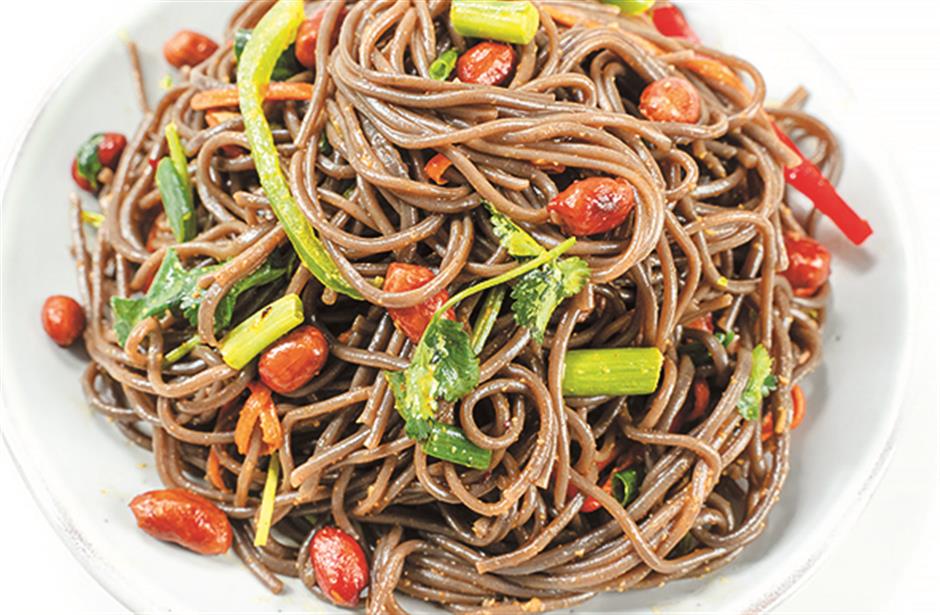 Traditional Shanghainese eateries are selling the season's special lengmian, or cold noodles, the favorite local summertime staple that keeps one full and cool.

The raw noodles are first steamed until the texture becomes half cooked and al dente, it's important to avoid overcooking to preserve the texture and keep the surface relatively dry.

The noodles are then boiled in a pot of water briefly until they are cooked, then drained and dried under a fan. Stir the noodles loose and mix in some cooking oil.

The special dressing for Shanghai-style lengmian is composed of peanut butter, fragrant vinegar, light soy sauce, sugar and sesame oil. The charm of the sauce is the combination of aromatic peanut butter and acidic vinegar.

The noodles can be topped with light stir-fried meat like chicken and pork, shreds with green pepper and mung bean sprouts, making the staple a speedy and nutritious meal.

Cold noodles are also referred to as liangmian. Cold noodles in other regions are different in terms of ingredients, skill and flavor.

Sichuan-style cold noodles are another popular choice. This recipe uses special thin, light-yellow noodles that are less starchy, which are steamed or boiled and then chilled dry under a fan.

When the temperature of the noodles drops, mix in some oil to keep them from sticking together. A seasoned chili oil dressing is poured over the noodles and toppings – poached mung bean sprouts, kelp shreds, fresh cucumber shreds – are added.

For a healthier option, the buckwheat cold noodle is ideal.

It goes well with a simple, umami dressing of light soy sauce, vinegar, sugar and salt, and you can even buy Japanese soba noodles that have been pre-cooked to save yourself from cooking in a hot kitchen entirely. 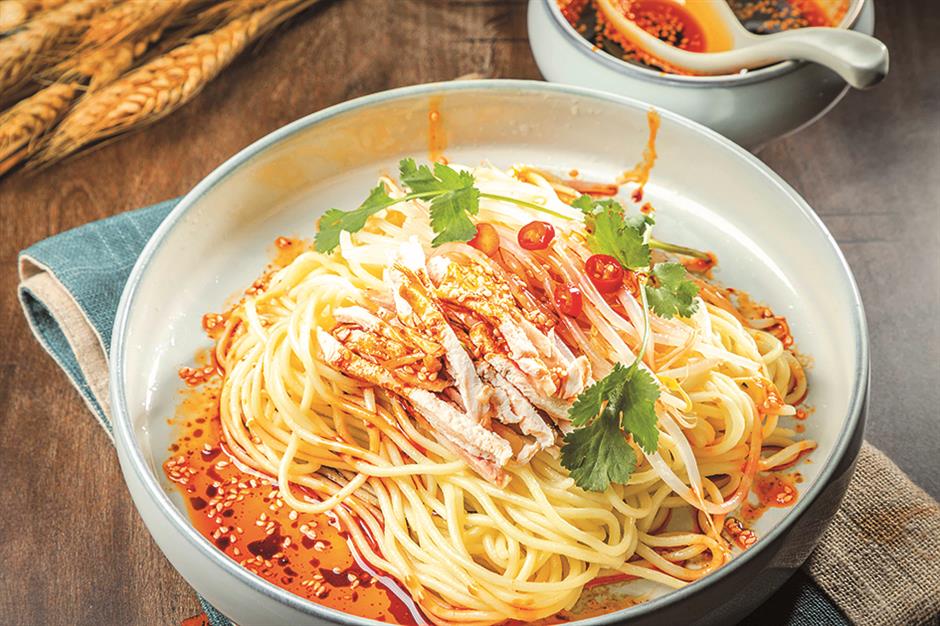 Liangfen, a tender jelly made of starch, is a popular Chines dish for the hotter summer days.

The jellies can be enjoyed as a quick staple for dinner, a cold-yet-flavorful appetizer, or a snack between the meals. Made from the starch of rice, peas, sweet potato or mung beans, the soft and bouncy liangfen is found across China with different recipes boasting diverse flavors and textures.

In Sichuan cuisine, liangfen is seasoned with iconic chili oil sauces. The people in Sichuan use two varieties of liangfen, the light-yellow colored jelly made of soy and pea starch, and the white kind made of other types of starch. The textures of the two are quite different: the white jelly is smooth and slippery, while the yellow jelly is dense and soft.

As liangfen itself packs minimal flavors and it's eaten mostly for the chilling feeling and texture, the dressings and toppings are very important. Restaurants usually use a combination of a dozen spices, sauces and seasonings to create the compound flavor one cannot get enough of, featuring red chili oil, vinegar, ginger, garlic, scallion, Sichuan peppercorn powder and many more. 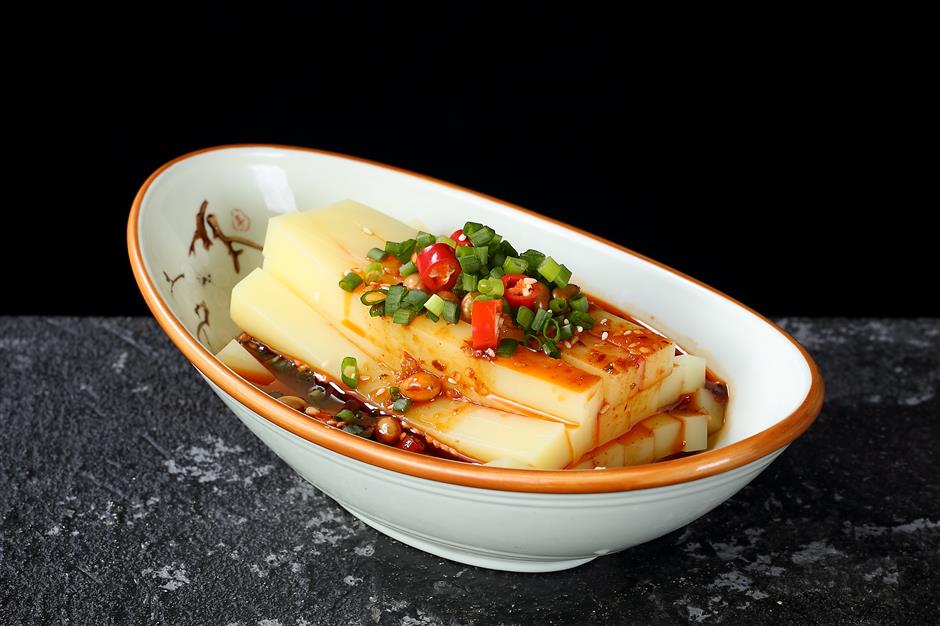 There are two tales regarding the unique name of the dish, one is that when the Hakka people arrived in Sichuan they missed the liangfen of their hometown so much that they became very sad. The other is that the liangfen dish is so spicy that people eating it can burst into tears, as if they were sad.

There's also a popular street snack in Sichuan called guokui liangfen, which is made by cutting open small, thin baked flatbreads to stuff in a generous amount of spicy cold liangfen noodle drizzled with chili oil. 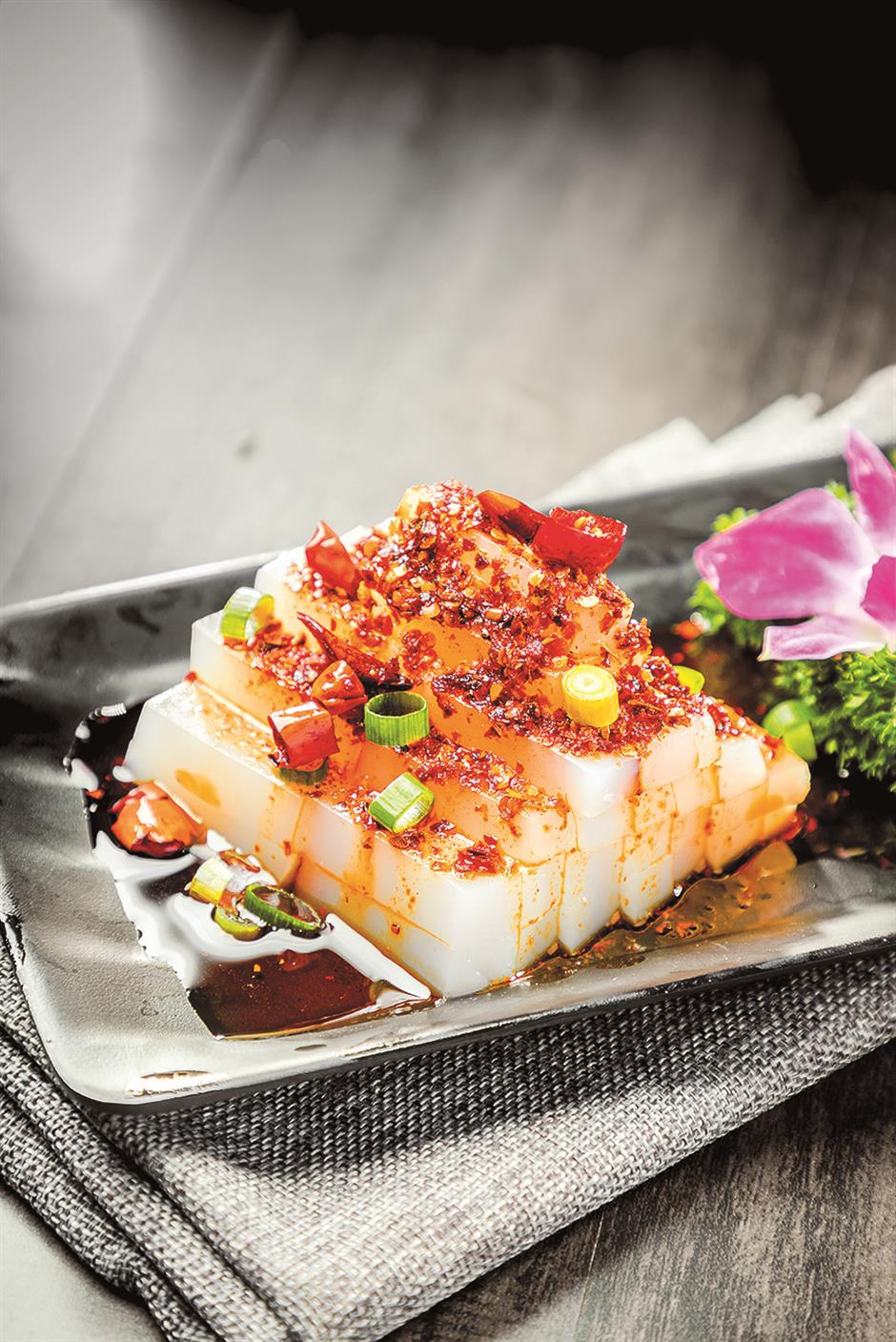 This staple-meets-staple recipe offers two distinct textures in one bite.

Packaged original liangfen can be found in supermarkets and it's usually ready to eat after adding the dressing. You can also make your own liangfen easily at home with simple ingredients of water and starch: prepare mung bean starch and water in a ratio of 1 to 5, add a moderate amount of water (usually of the same weight of the starch) into the starch and mix until they're well combined, then pour the mixture into a pot and add the remaining water gradually as you stir the starch mixture gently, boil and stir over low heat until it turns transparent. Pour the starch mixture into a bowl and let it cool to room temperature completely, which can take three to four hours.

In some places like Henan Province, the starch jelly is actually stir-fried with spices, sauces, garlic paste and scallion and often enjoyed as a street snack. 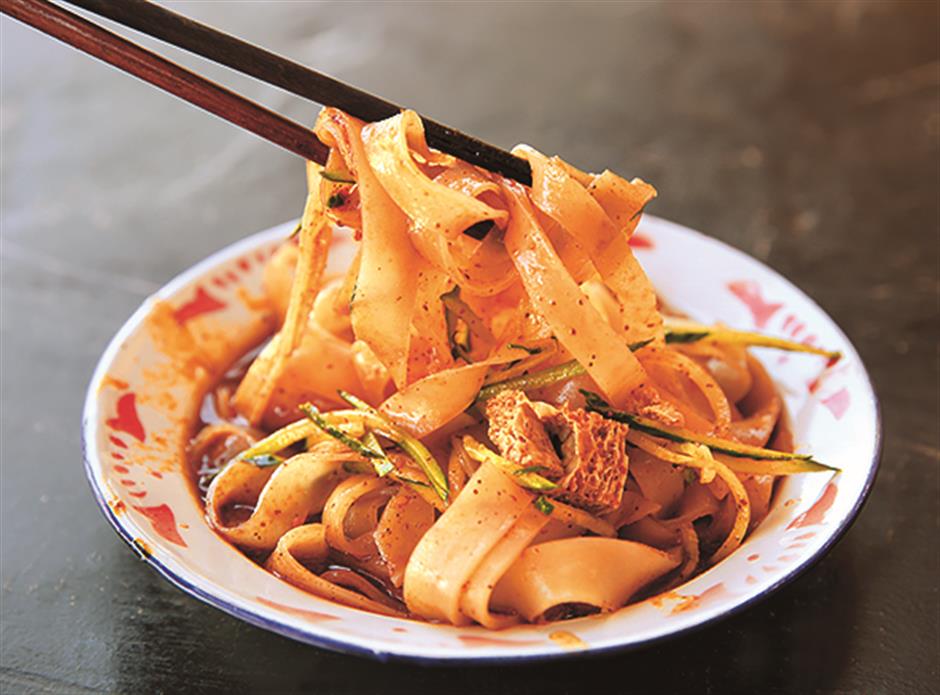 Liangpi, cold noodles made of flour

Chinese families were obsessed with learning how to make liangpi, the cold noodles made of flour, during the early outbreak of COVID-19 as the home quarantine gave people an extra-long Chinese New Year holiday.

It's essentially a flat, wide noodle served cold with a spicy dressing and vegetable toppings.

The texture of liangpi is special – chewy but not elastic, with the ability to take on the dressing perfectly.

The making of liangpi is a fun and even fascinating process. The first thing to do is to make a dough with flour, salt and water, then persistently "wash and rinse" the dough in a basin of water to release the starch, the time-consuming skill requires extracting most of the starch from the dough and the remaining by-product is actually wheat gluten, with a spongy and puffy texture.

The starch water is set aside for several hours so the thin batter settles in the bottom layer. Pour out the clear liquid of the top layer.

On a baking sheet or flat round metal plate, brush a thin layer of oil and pour some of the flour batter, shake gently until the batter covers the entire pan. Steam over boiling water for one minute, then cool in cold water and tear off a sheet of liangpi noodle.

Repeat the steps with the remaining liquid batter, you can layer the sheets and then slice into the wide noodles.

The wheat gluten is steamed and cut into smaller cubes and topped over the liangpi noodles alongside thin shreds of cucumber and carrot, poached bean sprouts and toasted peanuts.

The soul of the liangpi dish is the youpolazi, the sizzling chili oil condiment made by splashing hot oil over red chili powder seasoned with salt, white sesame seeds, peppercorn and more. The noodle and vegetable toppings are mixed with the chili oil as well as a standard sauce of light soy sauce, aged vinegar, salt, garlic paste and sesame oil.

Liangpi can also be served with a seasoned sesame sauce dressing.

In some parts of Shaanxi Province like Hanzhong, the noodles can be made with rice or rice flour, and are often served hot with a spicy chili oil dressing. The texture of the rice noodle is very soft and pillowy. 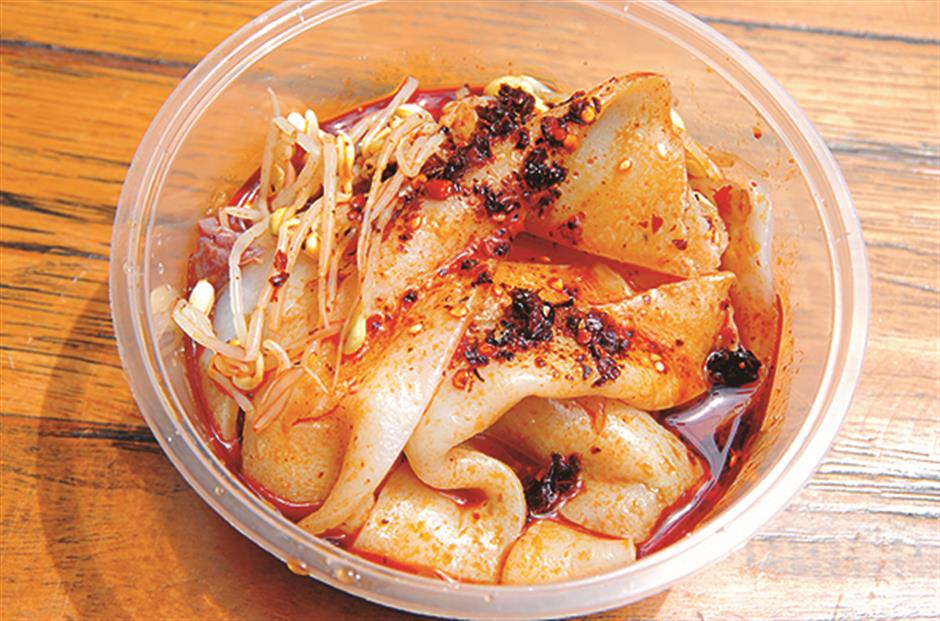 These two simple recipes can be served not only with cold noodles or jellies, but also salads and meats.

1. Heat oil in the pan. In the meantime, put the garlic paste, xiaomijiao, red chili powder and white sesame seeds in a bowl, splash the hot oil over the ingredients and mix well.

2. Add remaining ingredients to the chili oil mixture and sprinkle the chopped scallion. You can also add a little sesame oil.

2. Squeeze the juice of the lemon. Remove seeds.

3. Mix all the ingredients well.

It's a very refreshing recipe with a fruity touch, so it's better suited for liangfen, konjac (made of indigestible dietary fiber extracted from the konjac plant) and soba noodles.