I was barely 10 when I first visited the Stone Forest, also known as Shilin, in the southwestern province of Yunnan. The grotesque formations there have always fascinated me, which prompted a return visit as an adult.

Seeing it all again, I realized the power of nature revealed in just 400 square kilometers.

Shilin is a typical karst landscape, a landform underlaid by eroded limestone that produces characteristic ridges, towers, fissures and other features.

Along with other karst formations in southern China, Shilin was added to the UNESCO World Heritage list in 2007. 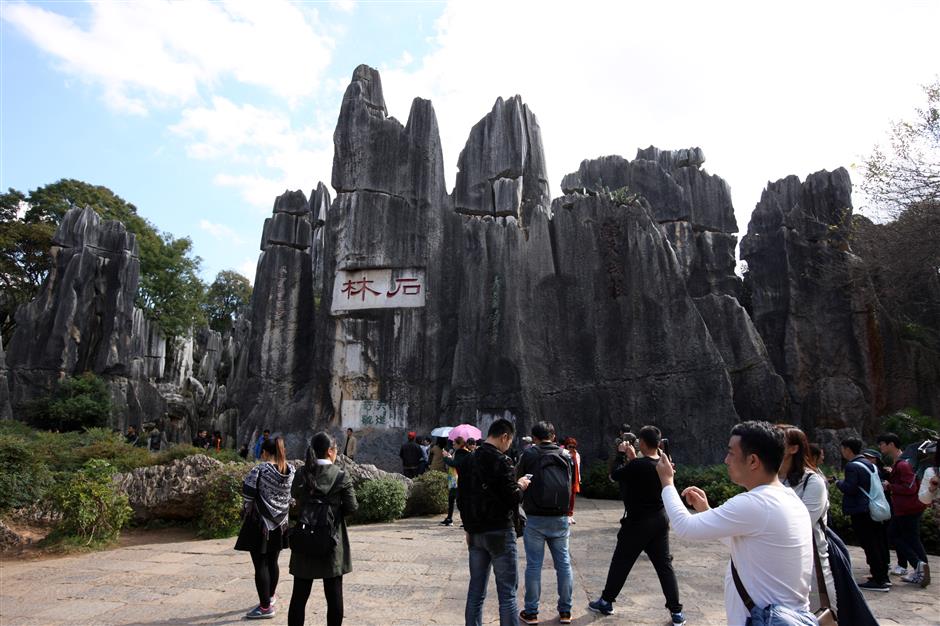 The Stone Forest in Yunnan Province was designated a UNESCO World Heritage Site in 2007.

The scenic area is divided into two parts, the Major Stone Forest, or Dashilin, and the Minor Stone Forest, or Xiaoshilin. Science tells us that the evolution of Shilin took more than 300 million years. Limestone in the area now takes the shapes of towers, swords or mushrooms, all of which have fired up the imagination of local people. The names given to the stone formation reflect both awe and sometimes humor.

For example, a triangle-shaped stone on the top of a stone hill is called the “Napoleon Hat,” which, to be fair, makes sense. A slim, tall piece of stone is called “Edge of a Sword.”

Meanwhile, a stone loosely held by two close peaks is simply named “Close Call.” Local people believe the stone will fall on the head of any evil person walking there. A bit far-fetched given that the stone has barely moved in the last 3 million years. 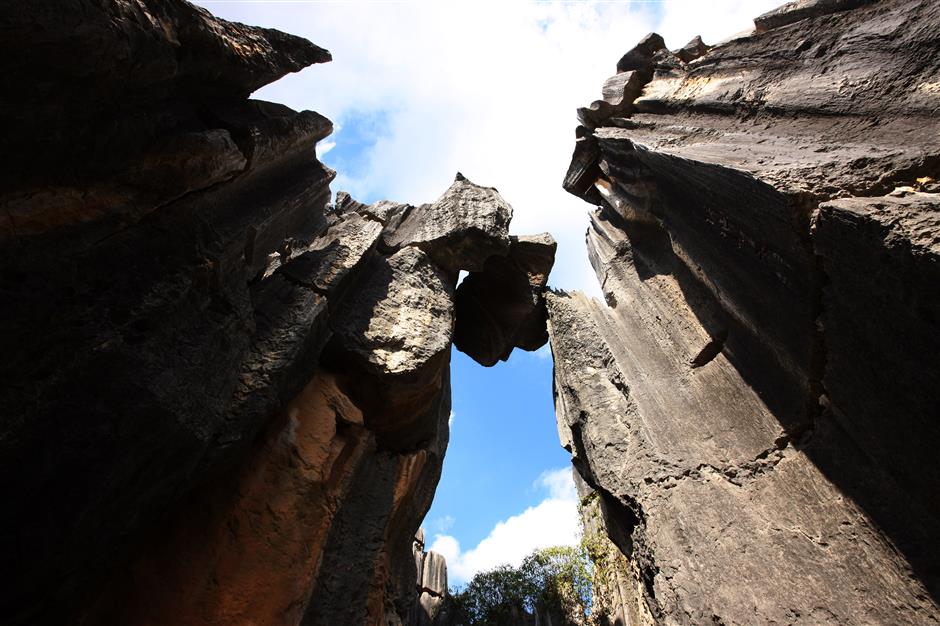 The stone held by two peaks is named “Close Call.”

One of the highlights is “Ashima,” a limestone formation that looks like a girl with a bamboo basket on her back. The 10-year-old me looked at the formation from the other side and thought it was a cloaked wizard with beard. Local Sani people, a branch of the Yi ethnic group, believe that the stone is the incarnation of Ashima, their legendary Echo Goddess.

It makes sense that the stone is interpreted as the figure of a young girl. You can see that she holds her head high, looking to the sky, and her hair is neatly worn in a bun.

The story of Ashima is based on Sani narrative poetry passed down for more than 2,800 years.

Ashima is a young girl from a poor family. She falls in love with Ahei, the adopted son of the family, and the two become engaged. Meanwhile, Azhi, son of a local tribal chief, captures Ashima and forces her to marry him. Ahei comes to her rescue and the couple escape. As the fleeing couple pass by a narrow creek, the tribal chief implored the cliff god to turn the waterway into a wide river. Ashima drowns and becomes a piece of stone, which people believe is the one in Shilin.

In the middle of the area, a vast landscape of smaller, sharp limestone resembles stone daggers protruding from the ground. On a nearby huge stone, ancient frescoes show patterns of humans, animals, the moon and the stars. The dating of the frescoes remains a mystery but they are believed to be related to some ancient Yi religion.

Walking past Liziyuanqing and going further south would reach a lake in the middle of a forest, the Long Lake. As it is not easy for outsiders to find the location of the lake, it is also named “the Lake of the Hidden.” The water of the lava lake is provided by unpolluted subsurface streams. Local Sani people love to have barbecue and campfire parties on the bank of the lake, and sometimes drifting on the lake with bamboo rafts.

Living in a place of such splendid wonders must have been an inspiration to the Sani people. They created writing texts even earlier than the Han people, and their culture was rich in literature, clothing, food, music and dancing.

There are direct fights from Shanghai to Kunming, capital of Yunnan Province, or you could choose high-speed trains if you have more time. The 12-hour train journey is said to be one of the most scenic in China.

Buses to the Stone Forest are available at Kunming Eastern Bus Station. The 1.5-hour ride plies a long, winding mountain road that might be difficult for people with carsickness.

There are buses going between the Stone Forest scenic area, Liziyuanqing and the Long Lake. 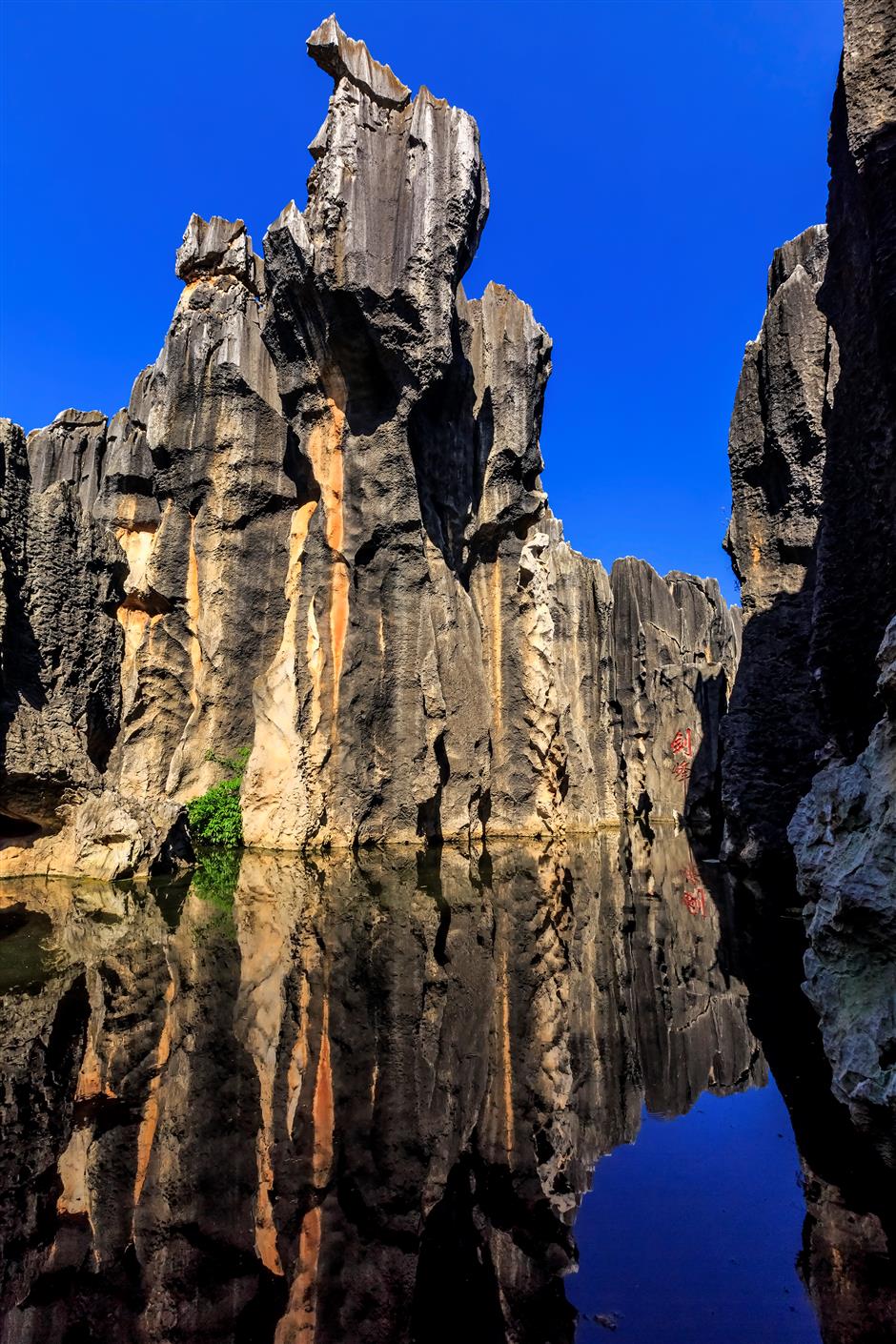 China is considered the largest karst area in the world. Centered in Guizhou Province, the area covers 550,000-plus square kilometers.

Apart from the Stone Forest in Yunnan, karst landscapes are found in a wide range of areas in the southern part of the country, including Guizhou, Guangxi and Chongqing. In 2007 and 2014, UNESCO included several sites in the area on its World Heritage list as “South China Karst.”

The South China Karst protects a diversity of iconic continental karst landscapes, including towers pinnacles and cones. More rarely found formations also feature in the area, such as giant dolines, or sinkholes, that the Chinese call tiankeng, or “pits made by heaven.”

Caves and sinkholes are always associated with karst landscapes, and southern China is no exception.

Nearly all the key areas on the World Heritage list, including Chongqing and Guangxi, have large caves that feature stalactites and stalagmites in unique formations.

The caves are not merely awesome viewing for visitors; they also provide a living natural history habitat for a variety of plants and animals.

Here are some other karst attractions on the list:

It takes around two hours to reach the Wulong Karst Geological Park from downtown Chongqing. In the area, the karstic formations create the very rare “Three Natural Bridges.” The huge arch spans — Tianlong, Qinglong and Heilong bridges — all stretch more than 300 meters, with widths of more than 200 meters. They are the largest group of natural bridges in Asia, and they stretch over two enormous natural pits, forming a marvelous spectacle.

Furong Cave is another must-visit site in Wulong. Considered a subterranean hall of art, the stalactites and stalagmites form waterfalls, flowers, clusters of grapes and shields, reflecting thousands of years of limestone deposits. 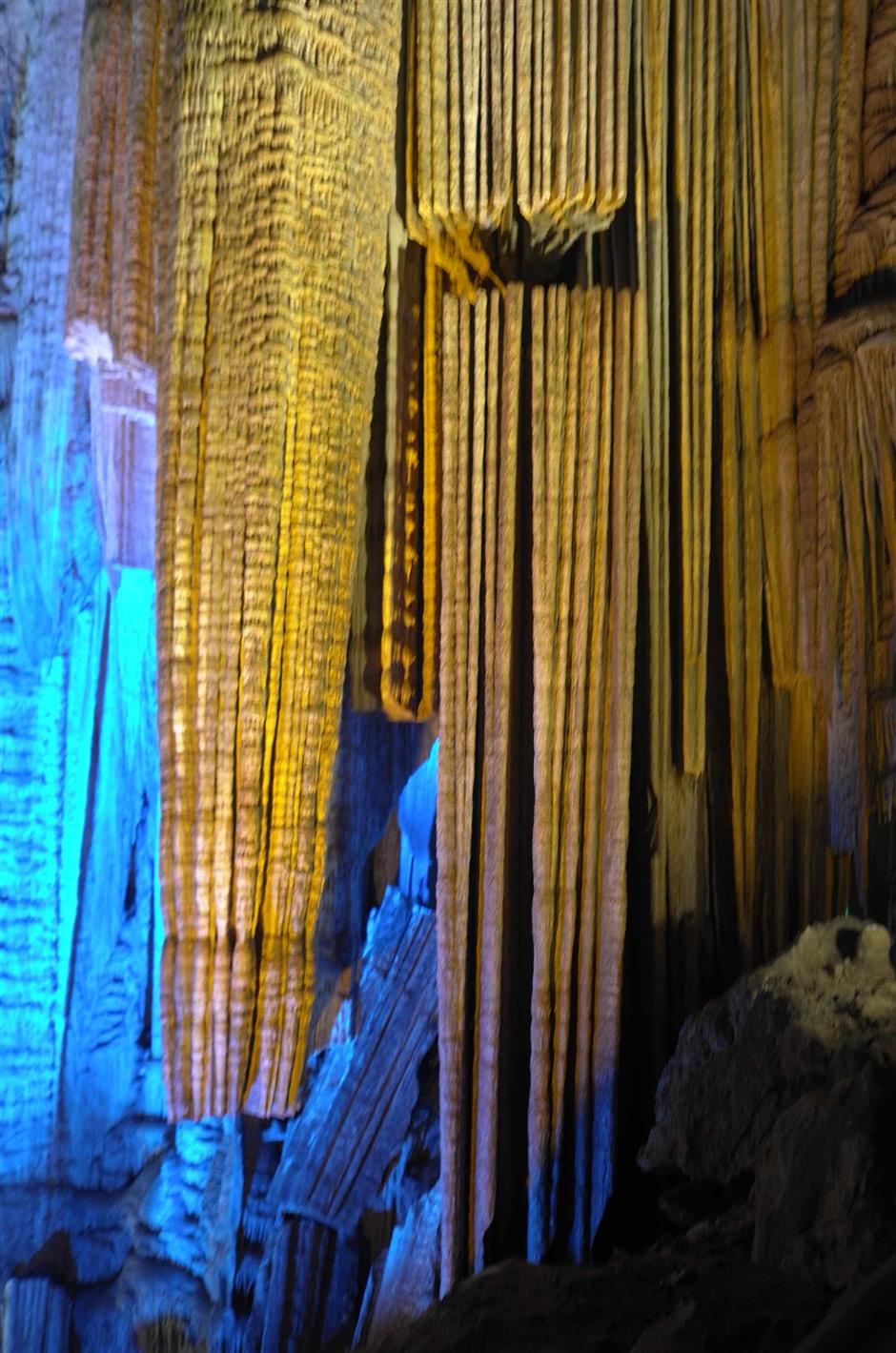 The stalactites in Furong Cave in Wulong form a stone waterfall.

Jinfo Mountain is about a two-hour ride from downtown Chongqing. It is best known for its “table-shaped” peak — a 2,238-meter-high plain slope surrounded by steep cliffs. It looks like a giant table in the sky.

For the past century, experts have been fascinated by the plant life in the 1,300-square-meter in the mountain area. It has one-sixth of China’s seed plant species, making it a valuable horticultural research center as well as a sightseeing attraction.

The names of the two areas — Daqikong (Larger Seven Apertures) and Xiaoqikong (Smaller Seven Apertures) — actually don’t have anything to do with karst structures but rather refer to two bridges built in the late 19th century. Both bridges have seven archways so that they were named according to their sizes.

One of the wonders of this karst landscape is waterfalls in all shapes and sizes, especially in Xiaoqikong. The Wolong Pond Waterfall, for example, is an icon of Xiaoqikong.

The wide and tender water current pour down from the Wolong Pond in all seasons. It is believed that the pond is so deep that even in flood season it is tranquil like a mirror.

Another iconic waterfall is the Cuigu Waterfall, or “Waterfall in a Green Valley.” Just as its name implies, the slim and long waterfall runs through a slope covered in thick green trees, creating a picturesque view. 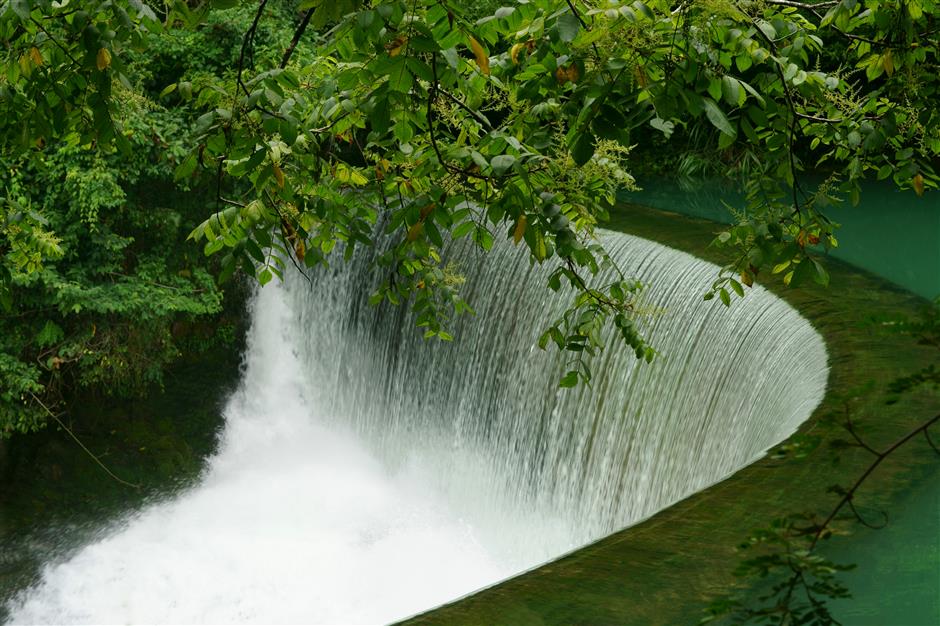 Wolong Pond Waterfall is an icon of Xiaoqikong in Libo of Guizhou Province.

Daqikong, on the other hand, is more known for grotesque limestone shapes and colorful ponds in the bottom of valleys.

The Tiansheng Bridge, a natural archway in Daqikong, is another must-see site. Formed around 3 million years ago, the bridge looks like an arch of triumph of the kind frequently seen in Europe.

There is an old Chinese saying: “The mountains and waters of Guilin are the best under heaven.”

It captures the long-held awe of the Chinese toward the famous landscapes in Guilin, the region on the Lijiang River celebrated for centuries in classic poetry and paintings.

The Elephant Trunk Hill, for example, is a typical karst wonder in Guilin. Towering more than 55 meters above waters, the hill resembles an elephant drinking water from the Lijiang River with its trunk.

Meanwhile, in Yangshuo, a nearby county, the landscapes are no less stunning than those in Guilin.

The dreamlike karst mountain scenery and rivers rippling through lush green fields in both Yangshuo and Guilin attract millions of tourists from all over the world. The panorama of this area has been described as “surreal, other-worldly and sublime.”

The entire area is covered with trees and shrubs, creating a green canopy along roads.

The scenery is so unique that it is rarely seen in other karst areas in China. 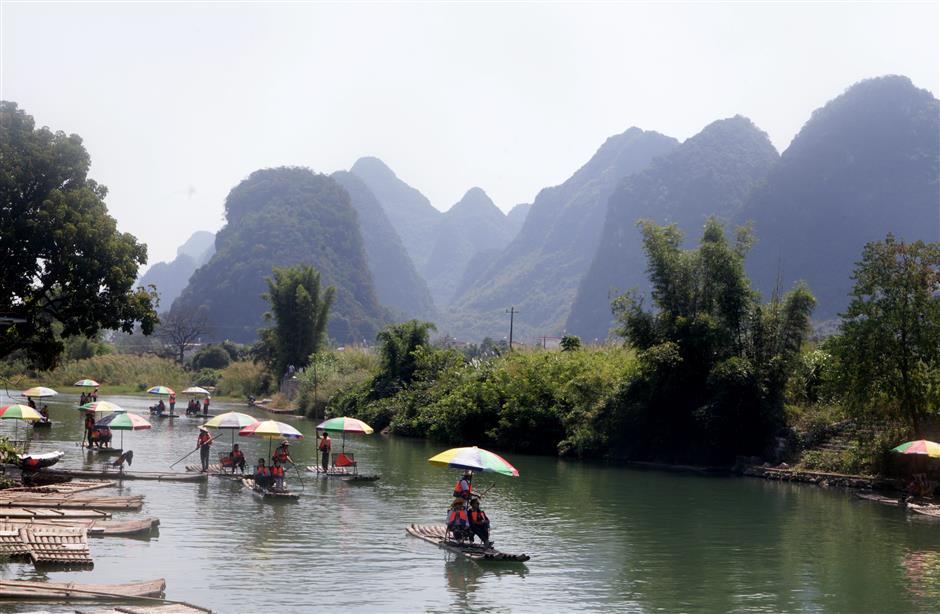 The dreamlike scenery in Guilin and Yangshuo is popular with tourists from around the world.