The Wudang Mountains in Hubei Province have attracted Taoist practitioners for more than 2,000 years. The imposing mountains and the picturesque natural landscape around them are believed to be blessed by heaven.

Today, Wudang is one of the four “Taoist Holy Lands” of China, along with Mount Qiyun in Anhui Province, Mount Qingcheng in Sichuan Province and Mount Longhu in Jiangxi Province.

The mountains have created a legacy of mind enlightenment, martial arts and temple building. In 1994, UNESCO included the Wudang Ancient Building Complex on its World Heritage list. 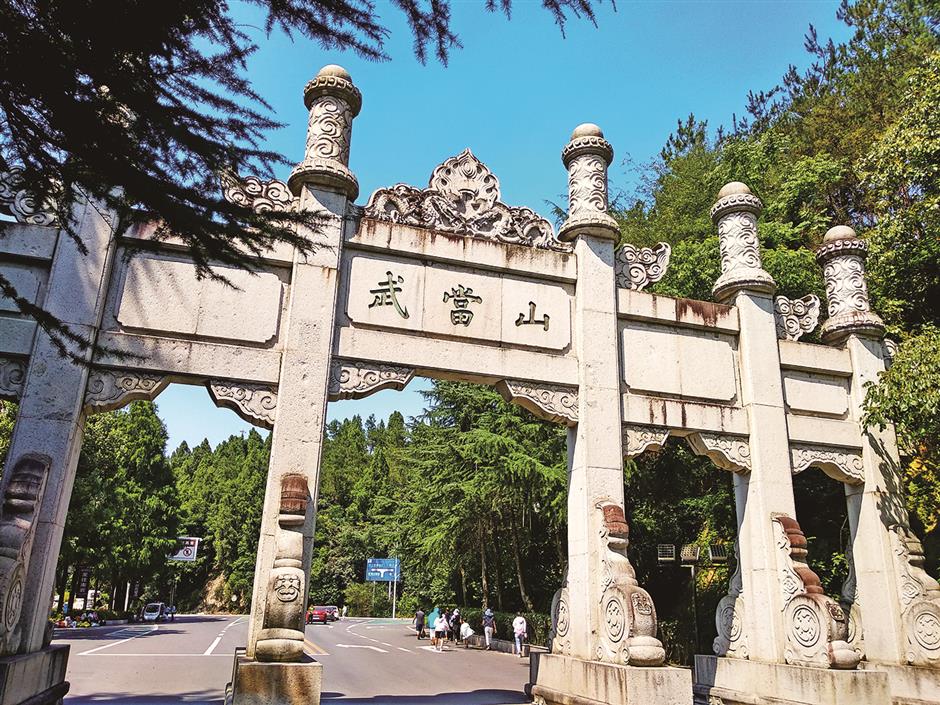 The front gate to the temples of the Wudang Mountains.

The origin of Taoism in Wudang can be traced back to the Spring and Autumn period (771-476 BC), when Taoist master Yin Xi practiced in a stone chamber in the mountains. According to historical accounts, Yin loved to stay at Wudang, which was called Taihe Mountains at the time. As the legend goes, the spirit of Laozi, the creator of Taoism, met Yin in the mountains and enlightened him.

For the next 1,000-plus years, the mountains attracted Taoists from far and wide. Temples mushroomed. The mountains were renamed Wudang at the end of the Eastern Han Dynasty (AD 25-220), in honor of the northern Taoist god Xuanwu, who was mainly worshiped there.

During the Ming Dynasty (1368-1644), Taoism in the Wudang Mountains enjoyed robust development due to support from the imperial family, especially Emperor Yongle (1360-1424). 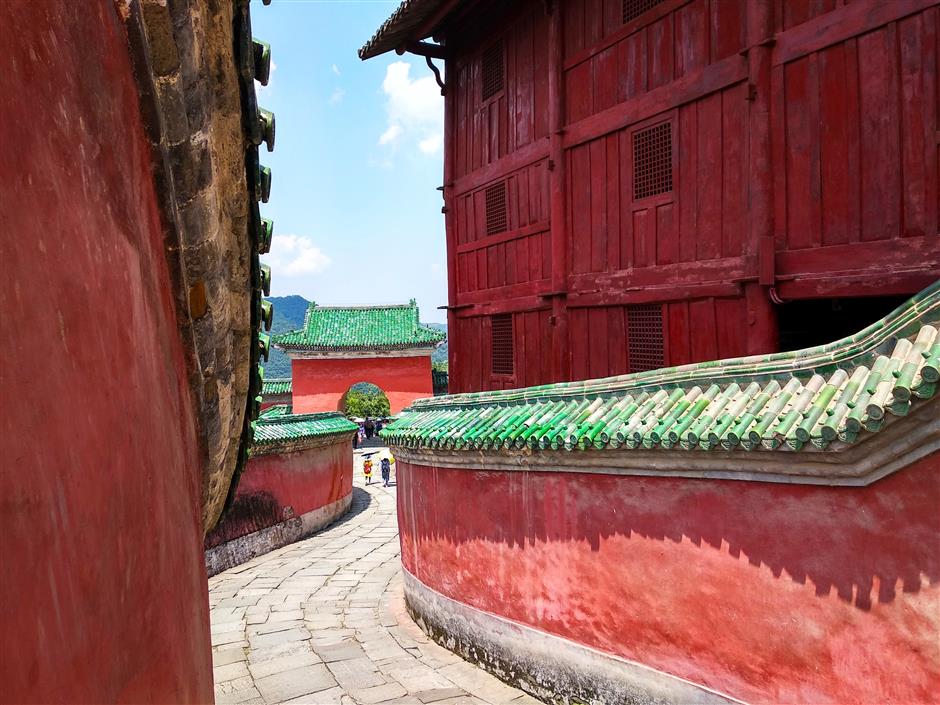 The winding defense wall of the temples was built during the Ming Dynasty (1368-1644).

The emperor was Prince of Yan when he usurped the reigning monarch and seized the throne. He was a devoted worshipper of Xuanwu and believed his ascension to the throne was blessed by the god and thus justified. He ordered temples to be built, restored and expanded at Wudang.

Most of today’s ancient building complex were first built during his rule. Among them the Taihe Palace is praised as “the core of the all temples in Wudang.”

Sitting atop 1,612-meter Tianzhu Peak, the palace is surrounded by lower peaks, as if worshipped by them. Built fully in gilt bronze, the palace shines brightly under the sun, giving it the name Golden Hall.

A bronze statue of Xuanwu is enshrined in the middle of the palace. Statues of an immortal boy and girl stand either side as his servants.

Local people often say that if a pilgrim or tourist doesn’t pay a visit to the palace, the entire trip to Wudang is wasted. The trek to the palace on foot is long and hard. Fortunately, cable cars now run to the site.

Apart from its magnificent exterior and interior decor, the palace attracts visitors for its puzzles, which have not been completely explained scientifically.

One of the puzzles is an oil lamp that has never gone out since it was lit more than 500 years ago. Even when the gate of the palace is open wide and mountain winds sweep through the hall, the tiny flame remains still. Scientists have attributed the phenomenon to a lack of air convection, but the explanation hasn’t convinced everyone.

Another puzzle is the palace’s ability to survive lightning strikes. In ancient time, when there were no such things as lightning rods, the palace was hit by lightning many times but suffered no damage. Local people swore that the palace shone more brightly after every strike and believed that Xuanwu sent the bolts to cleanse the palace and warn visitors to keep a pure heart. 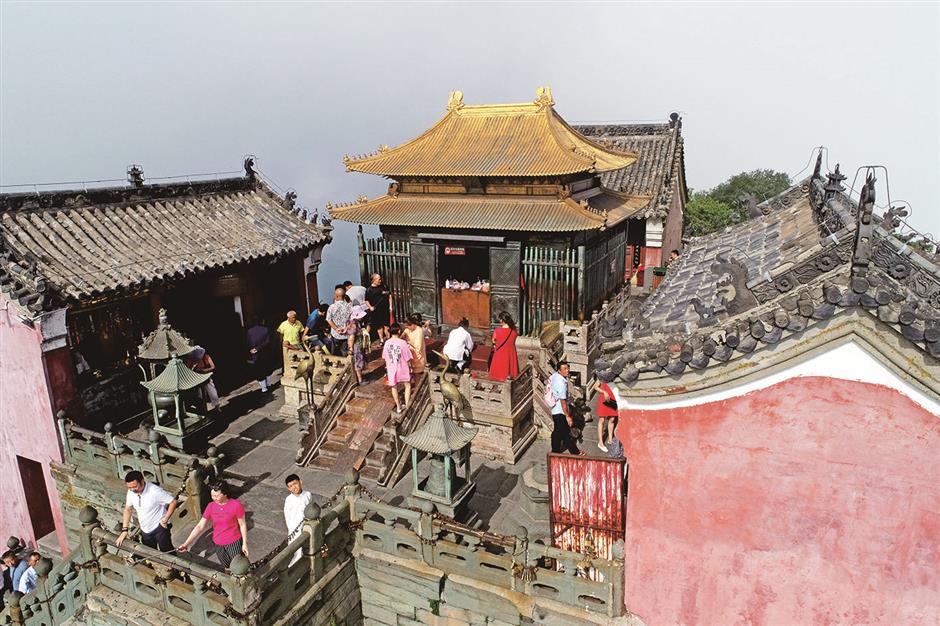 Another magnificent temple in the mountain complex is the Zixiao Palace. First built in 1121, it was restored during Emperor Yongle’s rule. The emperor wrote two stele inscriptions for the palace — one about the regulations for visits and the other a description of the temple restoration.

Valuable cultural relics are kept in the palace, including hundreds of statues and ritual vessels made during four dynasties. The biggest treasure is a Taoist scripture written in gold. It was transcribed by the national academy of the Ming Dynasty in 1440, and today the scripts still shine as new.

Yuxu Palace, located in a mountain valley, suffered the scourge of numerous disasters and was rebuilt in recent years. 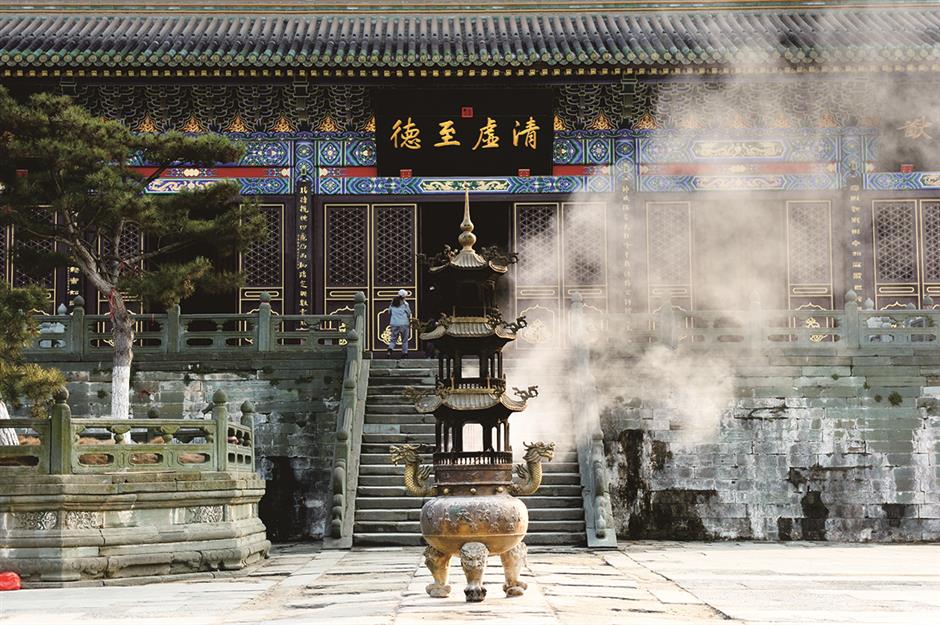 First constructed in 1413, the palace once covered 200,000 square meters — the size of 28 soccer fields — and had more than 2,200 halls and rooms. Although the main purpose of the palace was to worship the Jade Emperor of Taoism, it also served as government offices for the Wudang Mountains.

However, beginning in the later years of the Ming Dynasty, the palace seemed to be under a curse. In 1627, most of its main buildings were damaged in a fire. A century later, another fire destroyed the annex buildings as well. In 1935, a mountain torrent decimated nearly all of the palace. All that remained were Fumu Hall built in the Qing Dynasty (1644-1911), two long defensive walls, several archways and pavilions.

In 2007, the Wudang government decided to restore the Yuxu Palace to mark the upcoming 600th anniversary of Emperor Yongle’s order to foster Taoism in the mountains. The project used original building techniques and materials to rebuild the Longhu Hall, Yuxu Hall and several other buildings.

However, it was impossible to restore all the palace to its full former glory, when Wudang was called “the imperial temples” and was worshipped by the entire country, from the emperor to the grassroots population.

Legends and glory are partly rooted in the imagination. Visitors from all over the world come to Wudang looking for evidence of their favorite legends. Therein lies the charm of historical heritage.

Apart from Taoist culture, the Wudang Mountains are perhaps best known for a unique school of martial arts that has been passed down for more than 800 years.

In wuxia, or “martial arts and chivalry,” novels, that prevail in every Chinese community around the world, the Wudang sect is often described as one of the most influential in martial arts circles. The Taoist priests in temples are martial arts masters, especially adept at Chinese boxing and swordsmanship.

Wuxia novelist Louis Cha (1924-2018) wrote in his “Condor Trilogy” that Zhang Sanfeng, the creator of the sect, is the top one master of his time. 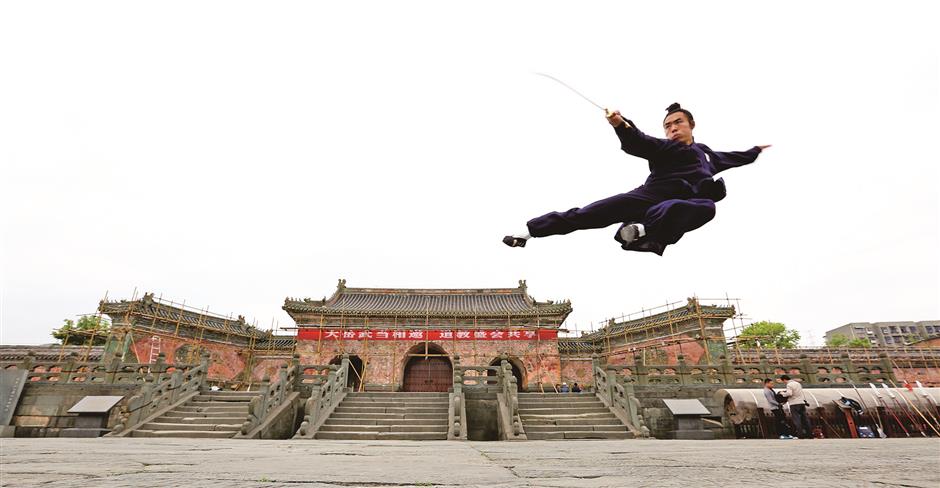 A Taoist priest practices martial arts in front of the Yuxu Palace in the Wudang Mountains of Hubei Province.

Fiction may often be juicier than reality, but Zhang, whose dates of birth and death are not recorded, will always occupy a prominent position in the history of Chinese martial arts for his creation of tai chi and other forms of martial arts.

Zhang combined traditional Chinese boxing with Taoist theories, making tai chi a way of building both body and mind. The genre is now popular all over the world.

This school of martial arts doesn’t encourage people to hurt others, but rather to defend themselves only if necessary. The Taoist priests in the mountains strictly follow a credo: “might never use aggressive martial arts but never forget how to.”

There are high speed trains from Shanghai to Shiyan, the nearest city to the Wudang Mountains. At the long-distance bus station next to the Shiyan Railway Station, buses to the mountain scenic area are available.