The Shennongjia Forestry District in Hubei Province is the only administrative zone in China with the word “forestry” in its name. It’s not a misnomer.

The land is covered by vast primeval forest, nurturing countless species of plants and animals, as well as legends and stories that have been passed down through the ages. It was listed as a UNESCO World Heritage site in 2016.

Tourism development in the area takes a back seat to the wonders of nature. The natural environment has been largely left intact, allowing visitors the opportunity to appreciate untouched beauty. Mountains, lakes, stone pillars, trees and flowers create an uncommon yet harmonious landscape in the district’s 3,253 square kilometers, which is slightly larger than the area of urban Shanghai.

Visitors to Shennongjia can base themselves in the town of Muyu, which is the nearest to all the scenic areas in the district.

For many people, a trip to Shennongjia is like paying pilgrimage to their national origin. The name of the district was adapted from Shennong, also known as the “Yan Emperor,” one of the two legendary ancestors of the Chinese people. Shennong is believed to have been the inventor of agriculture and traditional Chinese medicine.

Legends go that Shennong suffered so much seeing the sick and helpless that he vowed to find medicinal herbs to heal them all.

At the site of today’s Shennongjia district, he is said to have tried hundreds of types of herbs to gauge their effects. He was intoxicated many times, and tea was his only remedy.

It is believed that he wrote “The Classic of Herbal Medicine,” or “Shennong Ben Cao Jing” — the earliest traditional Chinese medicine compilation — and finally died after eating toxic heartbreak grass. 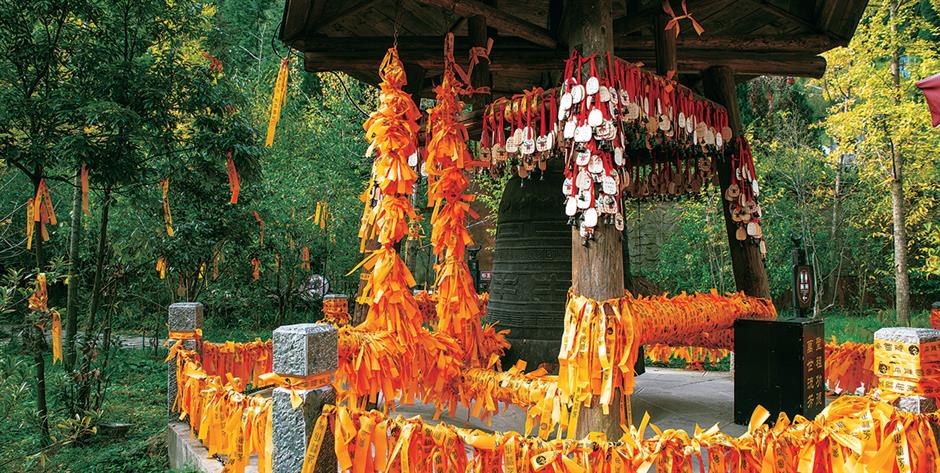 An altar dedidated to Shennong in Muyu Town.

The story of Shennong is mentioned in many ancient Chinese books, but there is no formal historical record to verify that he really existed. An altar to this legendary figure sits in Muyu, and the Shennongjia Museum of Natural History there commemorates this legend of traditional Chinese medicine.

The museum displays more than 2,000 breeds of plant species and 400-plus breeds of animal species, showcasing the natural assets of the district.

A more recent and even more mysterious story than Shennong’s is the legend of the Yeren, or “wild men.” There have been folklore tales about large, unknown primates living in the forest area since ancient times. Scientists have tried to confirm the existence of Yeren, but today the story still remains in the Jersey Devil or Sasquatch category.

In 1956, a 12-year-old girl named Wang Congmei said she encountered a “human-shaped animal” on her way home. Her mother and neighbors heard her scream, rushed out and killed the animal, and sent its limbs off for scientific research. A specimen of the limbs was displayed in a local high school. However, three decades later, an analysis on the specimen showed it to be the limbs of a short-tailed monkey.

Tales of the Yeren abound. One man was said to be a hybrid of a human and Yeren. The man, who was in his 30s in the 1980s, had a collarbone similar to a gorillas and exhibited ape-like behavior. Villagers claimed that his mother had been “abducted” by Yeren before the child was conceived. Further study, however, showed that the man was actually a 100 percent human and suffered from microcephaly, a medical condition where the brain doesn’t develop properly, resulting in a smaller-than-normal head. 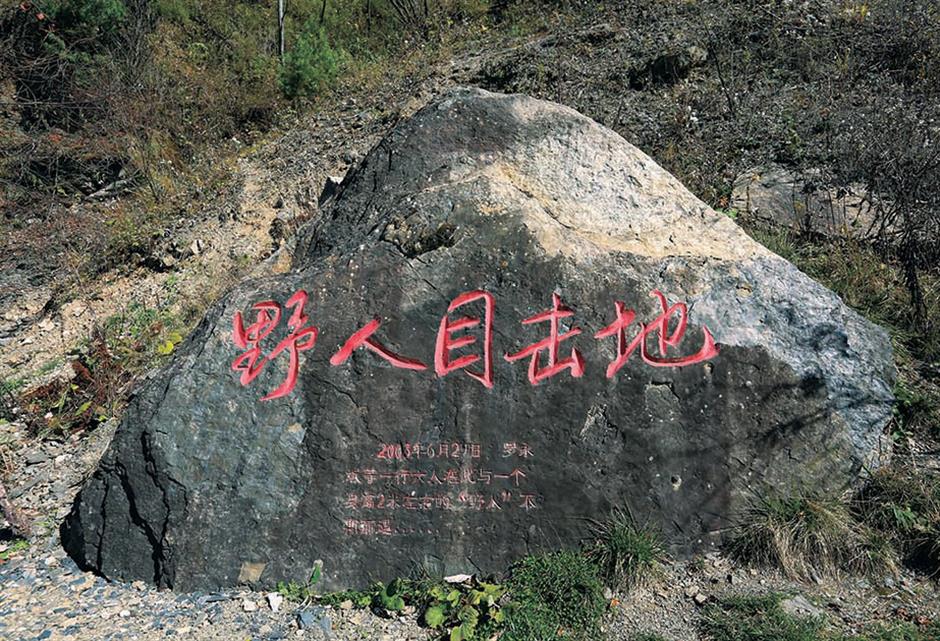 A stone marks the spot where someone claims to have seen an ape-man.

Scientific evidence notwithstanding, visitors to the area are often captivated by the legends. Many no doubt think to themselves: “What if I’m lucky enough to be the first person to spot a real Yeren?”

For Yeren searchers, the Banbiyan Forest is a favorite hunting ground because that’s where suspicious footprints, droppings and hair have been discovered, though none has ever been confirmed to be from an unknown species.

Even if a Yeren search is unsuccessful, a visit to the forest is never disappointing. The karst landscape forms grotesque stone pillars that seem to grow from the mountains into the sky. Visitors can walk around the stones and observe the patterns on them.

So what if you’re not interested in medicinal herbs or mysterious apes and just want some sightseeing delights? Shennongjia provides an array of options.

Hikers who love challenges climb the Shennong Top, a pyramid-shaped peak that is considered as the “ridge of central China.” The view from the 3,100-meter-high peak is stunning and often puts the clouds below your feet. Weather permitting, visitors can view the neighboring province from there. 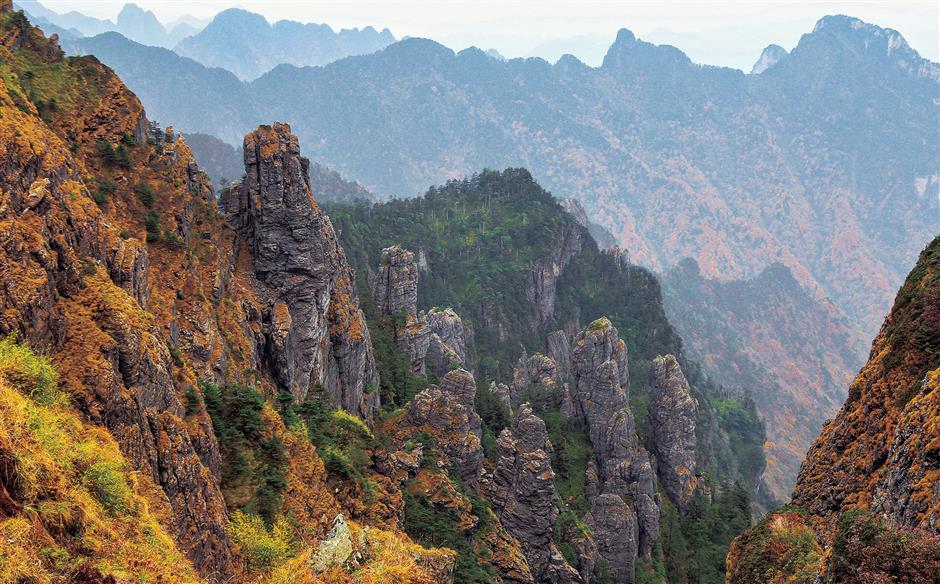 But it needs determined effort to reach the top via 2,999 steps on a 1.5-kilometer-long stairway, which is called the “Stairway to Qingyun.” The word “qingyun” means “high clouds” in China, which aptly describes the setting.

The climb might be boring if it weren’t for the panoply of different views along the stairway — a sea of bamboo, a stone forest and a plateau meadow filled with flowers and greenery.

“I couldn’t feel my legs the second day after I climbed up and down the stairway,” said a hiker named Yu Dayou. “It took me more than an hour alone to descend the mountain. But everything was worth it. It feels like you’re on the top of the world.”

If you don’t feel like wearing out your legs, the Dajiu Lakes Wetland at the northwestern corner of Shennongjia is an ideal outing.

Dajiu Lakes, which literally means “nine large lakes,” sit near the juncture of the provinces of Hubei and Sichuan and the city of Chongqing. The lakes are surrounded by mountains, and the scenery there is quite different from the mountain views. The lakes and the meadows surrounding them exude a sense of tranquility.

Plank walkways allow visitors to reach the middle of some of the lakes. Visitors often comment how it feels like stepping into a painting, with blue skies, white clouds and greenery reflected in the crystal-clear lake waters. Black and white swans add that final perfect touch.

Early dawn is said to be the best time to enjoy the view in the wetland. The rising sun casting a golden hue across the waters and the morning mist create an impressionist painting.

But only early birds get to enjoy the beauty. The wetland is about two hours’ ride from Muyu. The best time to catch the sunrise, according to local people, is before 7am.

Other attractions worthy of a visit in the Shennongjia district

On the north slope of Laojun Mountain is an immense hole formed by tens of thousands of years of water impact. From above it looks like a huge bridge under which rapid water runs. Tiansheng literally means “naturally formed.”

Surrounding the bridge are more than 60 breeds of wild orchids that impart bright colors and sweet fragrance every spring and summer. 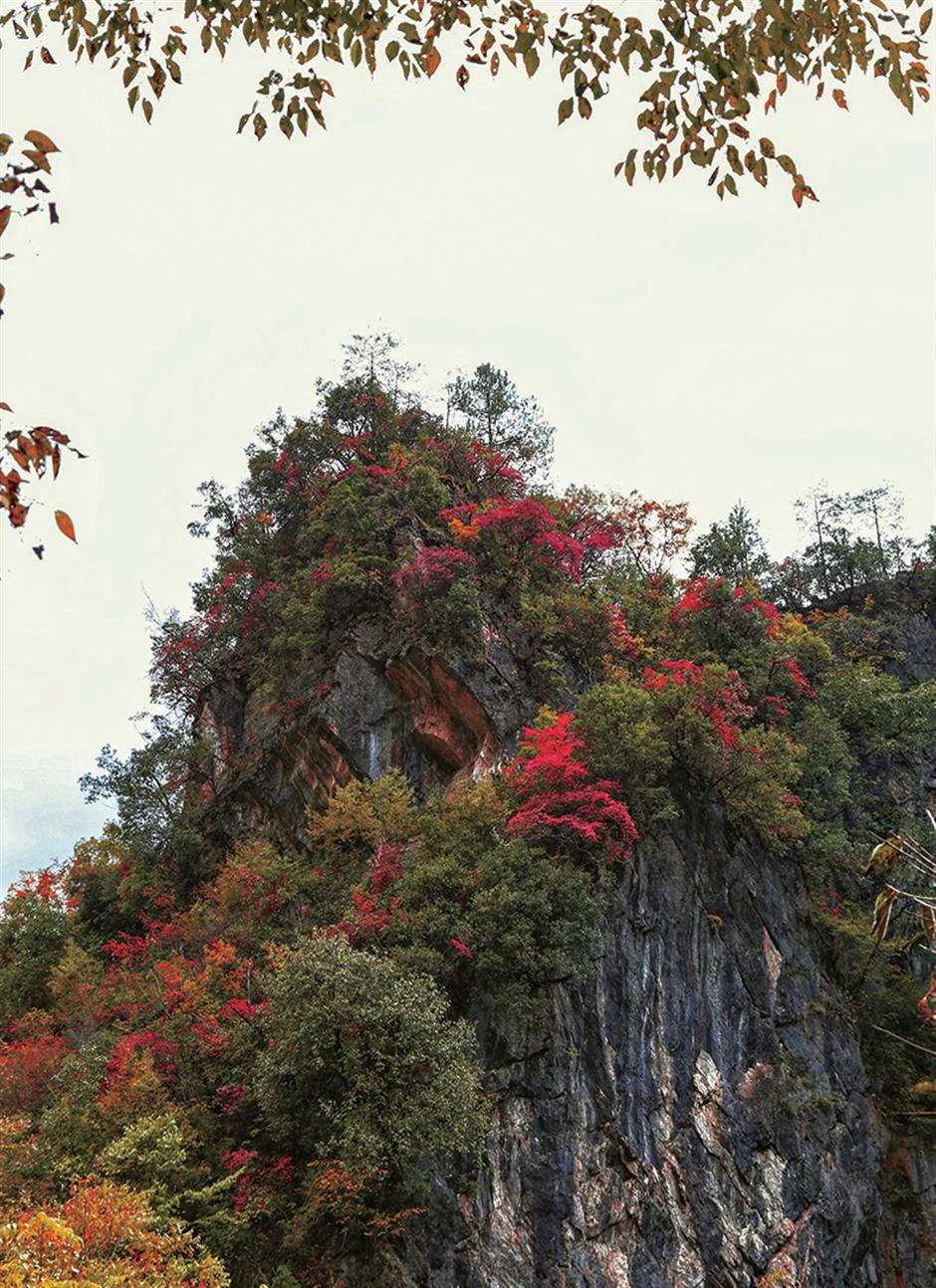 Tiansheng Bridge is surrounded by more than 60 breeds of wild orchids.

Only a 10-minute drive from Muyu is Guanmen Mountain, a huge botanical garden and zoo. Parents are fond of taking their children there to show them popular science. Rare animal and plant species are displayed in various pavilions, some of them unique to the district.

Located at the northwestern part of Shennongjia, the main attraction of Tianyan is Swallow Cave, where thousands of the birds roost.

The formal name of the swallow found there is “esculent swift.” Its saliva, used to make the nest, is believed to contain rich amino acids beneficial to human health. The swifts however are well protected by law.

The cave is dark. With flashlights, visitors can see layers and layers of nests on the high cliff. If you arrive before sunrise, you may see huge flocks of the birds flying out of the cave toward the sun, a rare scene that mesmerizes visitors.

Shanghai has direct flights to the city of Yichang in Hubei. From there, visitors can take a bus to the town of Muyu from the Yichang Long Distance Bus Station. In Muyu, there are buses going to many of the scenic areas in Shengnongjia. For places are not connected by bus, visitors are advised to book a taxi and negotiate the price with the cabbie. The usual taxi fare ranges from 100 yuan (US$14.88) to 150 yuan a day.