One-time capital of Vietnam in a world of its own 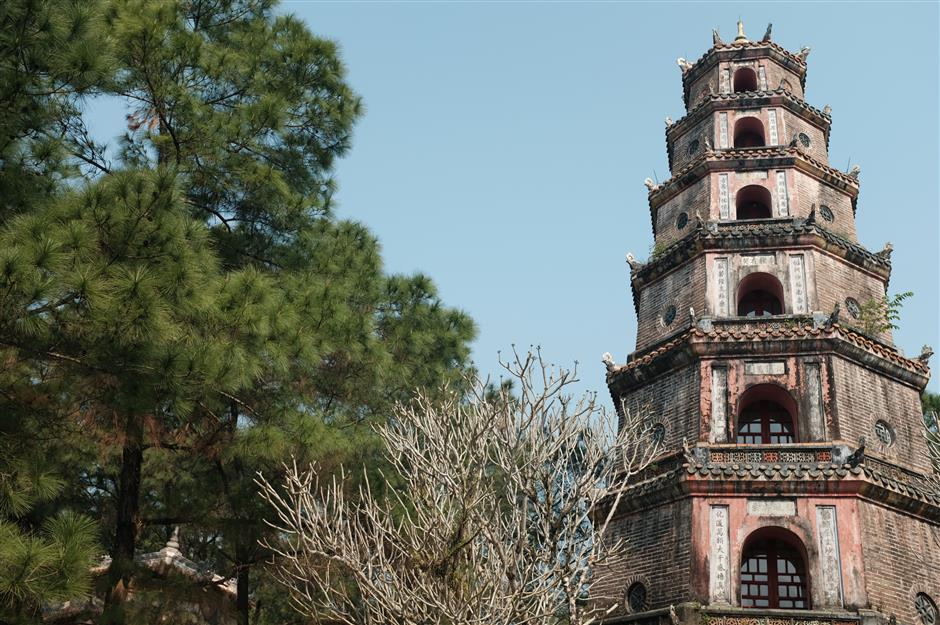 On an early spring evening in the historic Azerai La Residence, the hotel’s guests sit sipping cocktails on the terrace facing the Perfume River crossing the city of Hue. This tranquil setting, amid the colonial architecture and festive lights along the river, offers a glimpse of the one-time capital of Vietnam’s old-world charm.

Set on a two-and-a-half-hectare site with 200 meters of frontage on the fabled Perfume River, Azerai La Residence is not only the city’s best hotel but also an institution in Hue’s most well-heeled area.

At the time of its construction in 1930, the mansion was one of a long string of ambitious French edifices that stretched from a railway station built in 1906 to the Truong Tien Bridge erected in 1900. In between, a leafy boulevard was home to the French-built Quoc Hoc High School and a leisure club known then and now as Le Cercle Sportif. Much of Le Loi Street today looks as it did when it was known as Rue Jules Ferry.

The historic mansion at the heart of the hotel was built as part of the residence of the French Resident Superieur, or resident minister. The building’s distinctive facade, its long horizontal lines and nautical flourishes are hallmarks of the streamlined modern school of art deco architecture. In 1963, the property returned to its roots as a guest house and the last emperor of Vietnam, Bao Dai (1913-97), and Thailand’s King Bhumibol Adulyadej (1927-2016), were both said to have stayed in the mansion.

Outside the art deco hotel with its jazzy panache, and in distinct contrast, Hue is a Vietnamese world all of its own and keeper of the country’s soul. 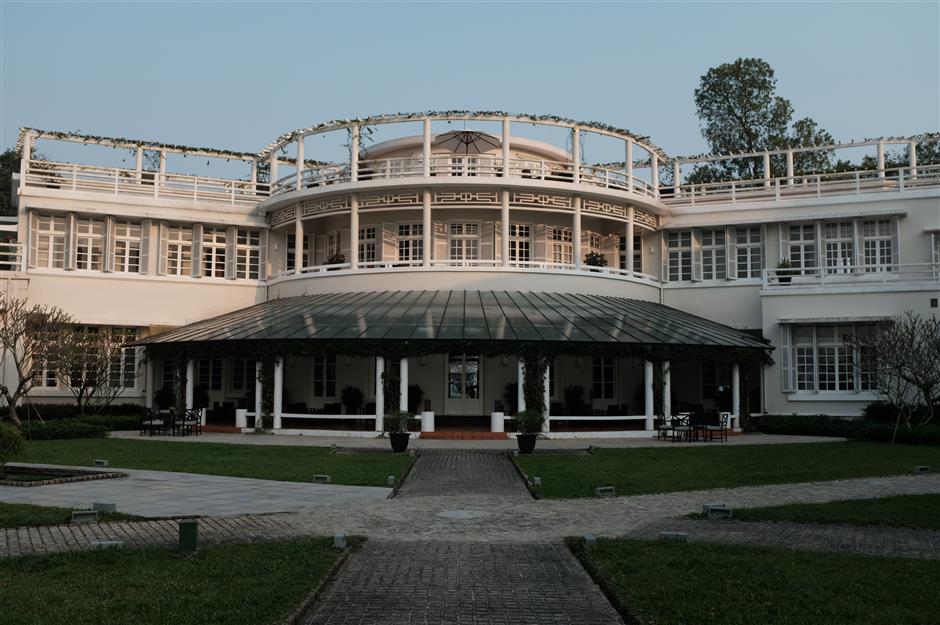 The distinctive facade of Azerai La Residence, the city of Hue’s best hotel, features long horizontal lines and nautical flourishes that are hallmarks of the streamlined modern school of art deco architecture.

The charm of this ancient city lies in its different facets from the magnificent Citadel (the Imperial City) left by the Nguyen emperors and the colonial mansions built by the French in the last century, to the modern day energy prevailing in the city’s every corner.

Recognized by UNESCO in 1993 as a cultural treasure worthy of protection, Hue’s stunning Imperial Citadel, as well as the mausoleums and tombs of the Nguyen emperors, retain the majesty and elegance of the imperial dynasty, thus making Hue a unique city in Vietnam giving you a sense of the country’s rich history and traditions.

Hue is Vietnam’s last imperial capital. Once the northern frontier of the now vanished Kingdom of Champa, Hue was ceded to the Vietnamese in the early 14th century and came into its own as a Vietnamese province when the Nguyen lords migrated south more than 200 years later. After consolidating their hold on all of Vietnam in the early 1800s, the Nguyen emperors established their capital at Hue in 1802.

Inspired by the Forbidden City in Beijing, the Nguyen rooted their kingdom in the Citadel. They surrounded the emperor’s private domain with city walls and surrounded these walls with the 6.5-meter-high walls of a Citadel modeled on a design by French military engineer Sebastien Vauban.

The French colonial governor held sway over all of Vietnam from Hue, though the Nguyen emperors remained as nominal heads of state until the last emperor, Bao Dai, abdicated in 1945. 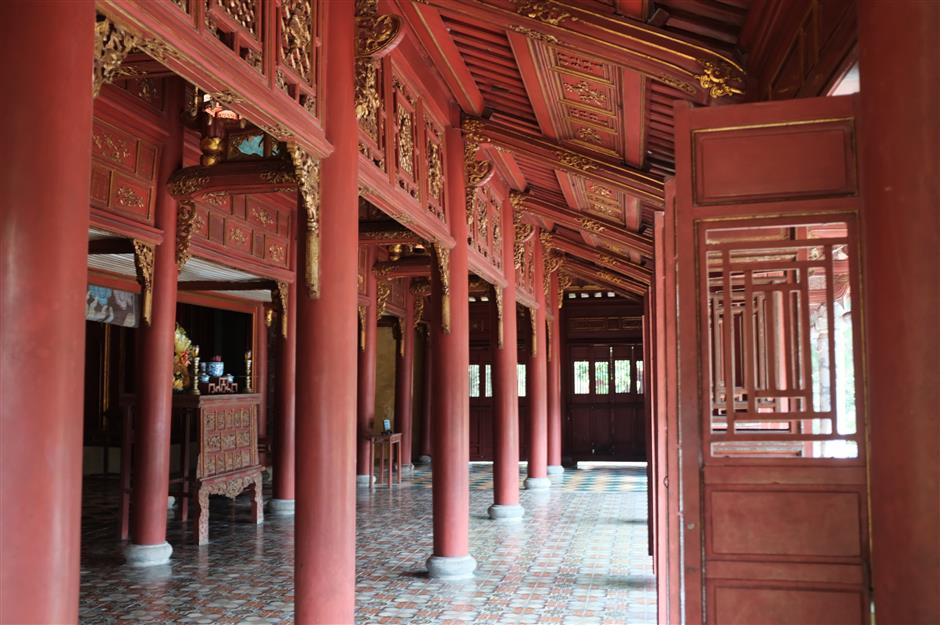 One of the imperial halls inside the magnificent Citadel features elaborate carvings symbolizing the past glories of the Nguyen emperors.

Though much has been damaged in war or simply lost to time, a walk inside the walls of the large Citadel complex provides a fascinating glimpse into the lives and inner workings of Vietnam’s final imperial dynasty.

Entry to the palace is allowed, though pictures are forbidden in several halls. Given the massive size of the Citadel, there is no perfect rule but a random walk will give some pleasant surprises and make for a peaceful break away from the crowds.

The city of Hue is not only home to the sprawling complex of the Citadel but to many pagodas and imperial tombs that together form the foundation of the city’s listing on the UNESCO World Heritage list.

There are plenty of details to take in for those willing to explore the imperial city. More than 300 Buddhist pagodas are active in Hue, from the renowned Thien Mu Pagoda high on a bluff above the Perfume River to the more sublime Tu Hieu Pagoda, where monk and activist Thich Nhat Hanh lived as a novice in the 1940s. Thien Mu Pagoda has become an essential part of Hue city with the symbol of the octagonal 21-meter-high tower set against picturesque nature. 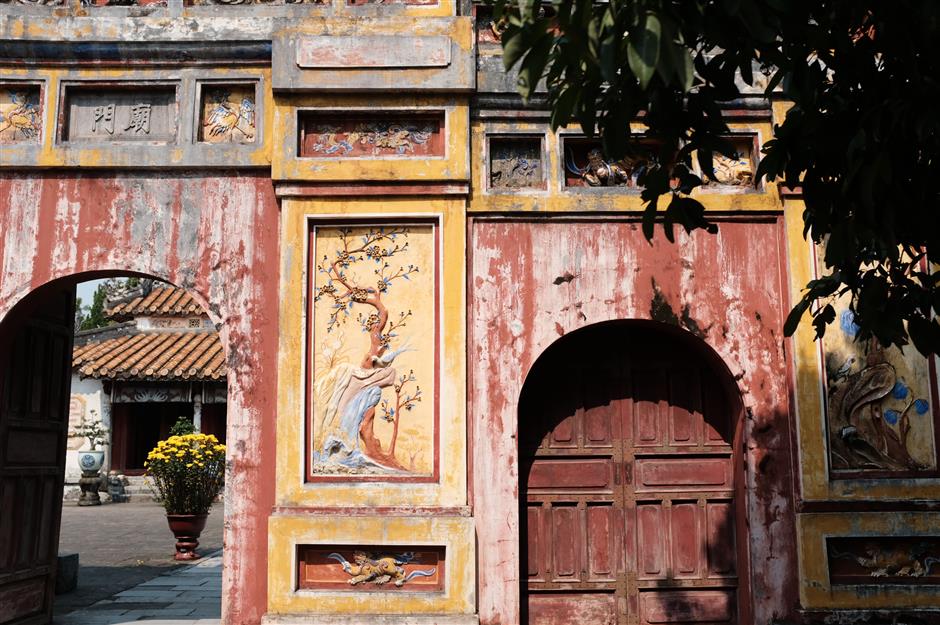 A walk inside the walls of the large Citadel complex provides a fascinating glimpse into the lives and inner workings of Vietnam’s final imperial dynasty.

Besides visiting ancient monuments and tombs, when you come to Hue, you simply can’t miss a chance to indulge in some of the best food the country has to offer. Food is at the very heart of Vietnamese culture and almost every aspect of social, devotional and family life revolves around the procurement, preparation and shared pleasure of nourishment.

Food is everywhere in sight. The food is beautiful to behold if only for the colors alone: turmeric-yellow crepes, scarlet-red chilies, endless jungles of vivid green.

Hue has long made a name for itself on the culinary scene, as a birthplace of many of the country’s popular dishes.

Elegant hotels such as Azerai La Residence present the city’s elaborate cuisine developed by skilled cooks, hence the presentations are equally elegant. After a tasting at the hotel’s beautiful river-front Le Parfum Restaurant that serves authentic local fare and a compelling selection of Western dishes, I decided to explore more about the delectable cuisine and try to “eat like a local.”

I did my research online and found a “Taste of Hue” food tour. When my guide and cyclo driver welcomed me at dusk with a big smile, I knew I was about to start a thrilling experience zooming around the city. During the three-hour journey, we tucked into different specialities at six street vendors. According to locals, when people crave for a particular dish, they usually visit a particular street vendor, often on a particular lane. The best way to tackle Hue is to treat the city as one vast progressive buffet, moving from the beef soup guy to the grilled pork lady and onward into the night with some local sweet soup.

I was knocked out by Hue’s signature soup Bun Bo Hue at the first stop: a fiery broth of long-simmered beef bones and beef shank, suffused with lemongrass and seasoned with fermented shrimp sauce and other herbs. 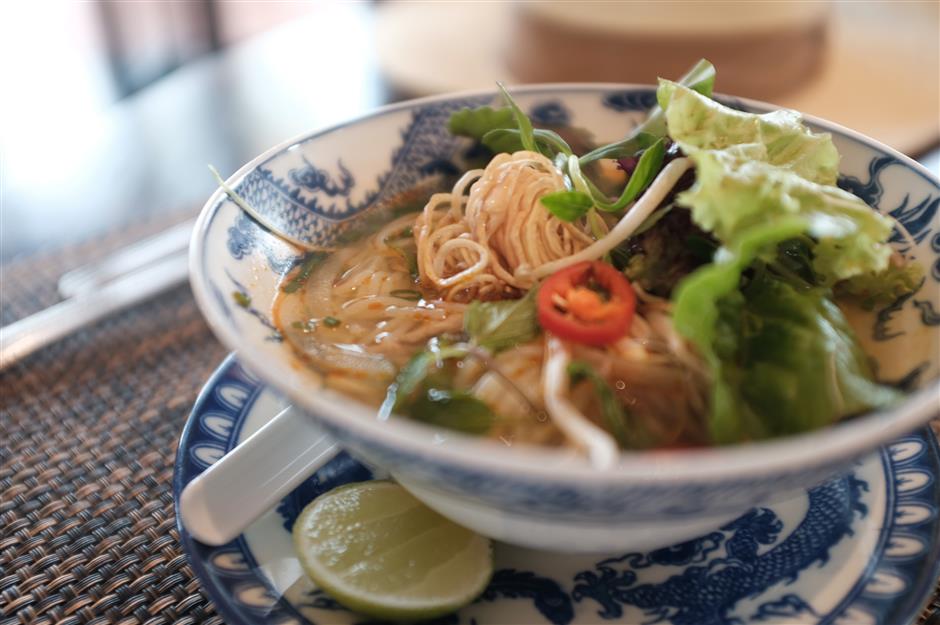 Served with Vietnamese herbs, it is another fantastic bowl of brothy vermicelli one should try other than the usual pho thanks to its balanced spicy, sour, salty and unami flavors. However, it is said the locals love their Bun Bo Hue soup for breakfast so early mornings are the busiest time for the savory soup. There’s no shortage of spots in the city dedicated to street-food noodles.

Nem Lui is another local snack that sums up everything that’s simple and delightful about Vietnamese eating. Grilled ground pork on a lemongrass stick is served with a bowl of peanut sauce instead of fish sauce as in many other cities. The result is a flavorful smoky meat that can be dipped in the peanut sauce and, together with different herbs, the mixture is wrapped up in a sheet of rice paper.

Banh Loc was a particular item I’ve tried at a street-side stall that is essentially reflective of the old imperial capital’s simple yet sophisticated dishes. Wrapped in banana leaves, the small, clear-looking, chewy tapioca dumpling stuffed with shrimp and pork is reminiscent of dim sum in China. Dipped in the fish sauce, the dainty, flower-like dumplings are held dear to the locals’ hearts yet I found them a bit too gluey for my own taste.

The highlight of this tour, however, was the relaxing, breezy way we passed through the city’s many tree-lined streets and hidden lanes, observing the lifestyles and eating habits. We ended the tour with Che — a sweet soup with a mixture of different kinds of beans and sweeteners according to your liking. Locals enjoy sweet soup on the street in the evening while having a chat with friends before heading home. 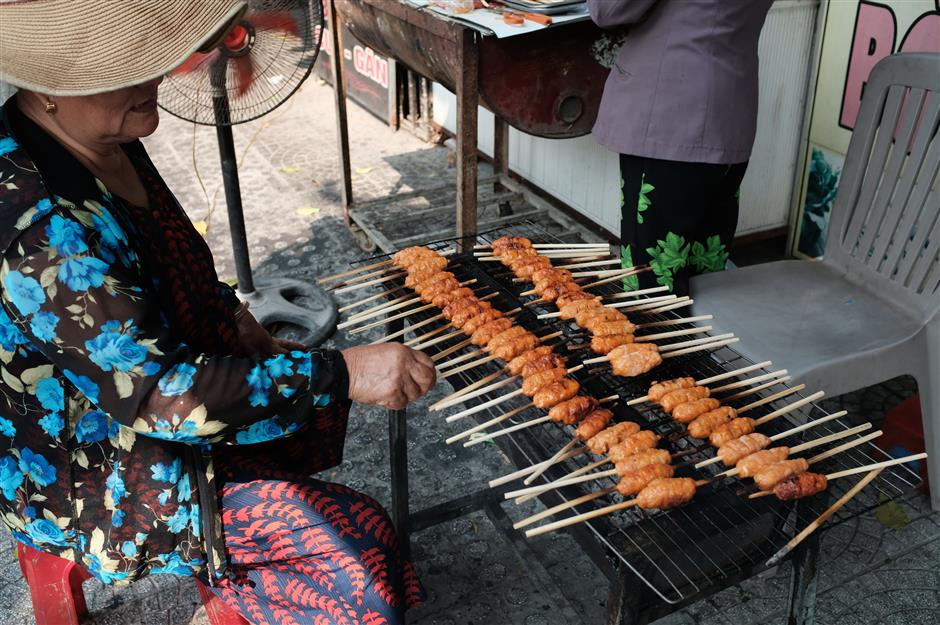 Nem Lui is a local snack that sums up everything that’s simple and delightful about eating out on the streets of Hue.

Hue is generally hot and dry from March through September, with average high temperatures ranging from 28 to 32 degrees Celsius. Rain is more likely in September, and most frequent in October and November. December through February are the coolest months, with typical highs hovering at 24 degrees. 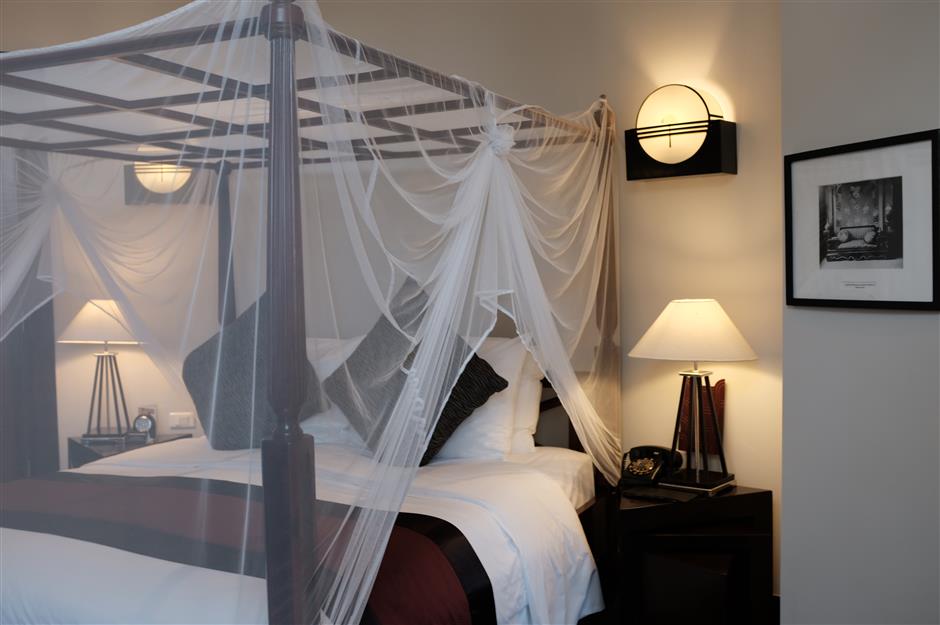 Azerai La Residence — the colonial mansion at the heart of the hotel — is one of the most charming structures in Hue. The enchanting, historic hotel is the latest property in renowned hotelier Adrian Zecha’s new group.

Set on a two-and-a-half-hectare site with 200 meters of frontage on the fabled Perfume River, it offers guests simple elegance, refined design, and discreet and attentive service without the usual pretence seen in many upmarket hotels.

The rooms and suites occupy three distinct buildings with west and east wings offering rooms with a contemporary look that trades on both simplicity and timeless elegance while in the mansion, 10 historic rooms and suites offer the ultimate romance of life in a bygone era.