Jinshan District, which borders Zhejiang Province and Hangzhou Bay in Shanghai’s southwest, is a rewarding getaway for local visitors seeking a break from urban bustle. It lends itself perfectly to a one-day car tour.

What’s there to see? Well, for starters, the remnants of the rugged lifestyle of an ages-old fishing industry. Then, there’s a colony of celebrated farmer artists, a stunning beach and a quaint old water town relatively unscathed by commercialism. 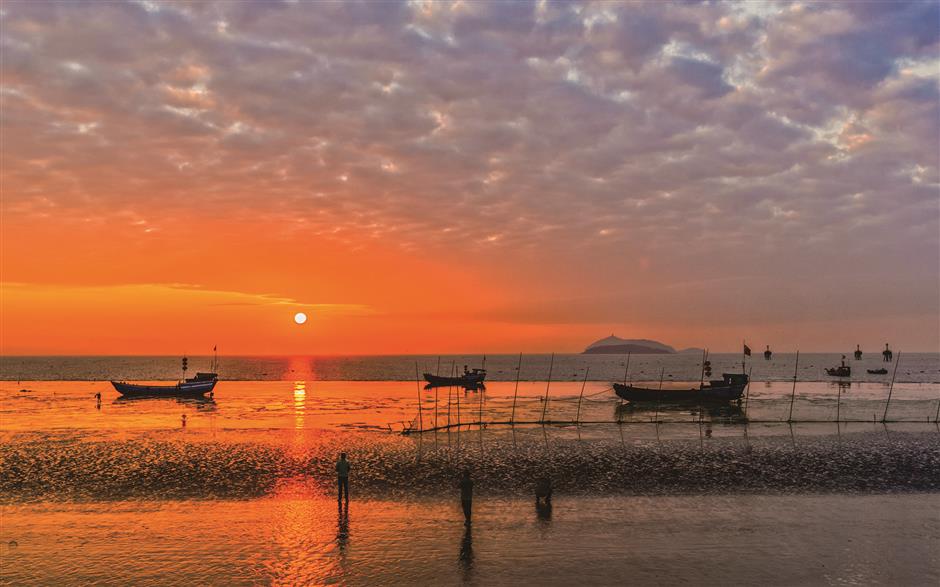 First stop: the fishing village of Jinshanzui, about 60 kilometers south of the Hongqiao Railway Station.

It is one of the first and one of the last fishing villages in Shanghai. According to the local chronicles, the village thrived in the late Qing Dynasty (1644-1911), with 36 handicrafts workshops and more than 10 fish shops.

More recently, the traditional fishing industry has declined, with tourism filling the gap.

Visitors can not only enjoy authentic seafood in beachside restaurants, but they also rent a fishing boat to try their luck at angling.

Like many fishing villages in South China, people from Jinshanzui Village worship Mazu, a goddess who was thought to roam the seas, protecting her believers through miraculous interventions.

Local people honor her every New Year’s Eve, when all families involved in fishing prepare a feast to welcome the goddess.

After a fresh seafood meal in the village, it takes only seven minutes to drive south along the coastline to reach Jinshan City Beach in the old town area of the district. It is open every day from 8:30am to 9pm. The entry fee is 10 yuan (US$1.40) on weekdays and 20 yuan on weekends.

The 3.5-kilometer-long manmade sand beach has everything a beach lover could wish for: beach volleyball, motorboat surfing and plenty of soft sand to do a bit of sunbathing.

The Jinshan government built a levee in the outreach of the beach to keep the muddy waters of the East China Sea out of the area.

In the center of the beach is a huge Ferris wheel. It opens early in the morning, affording riders an excellent observation point to watch the sun rise and bathe the environment in a warm pink.

Our day trip continues to Donglin Temple in Zhujing Town, about 30 kilometers northwest of the beach. It was first built during Yuan Dynasty (1279-1368) to worship Guanyin, the Goddess of Mercy.

After centuries of warfare and fires, the temple fell into disrepair. For a time in the late 20th century, a repaired version was home to the government of Jinshan. In 2007, the temple was restored and expanded. Only one hall that survived the vicissitudes of time remains.

During the renovation, monks and believers crafted a 33-meter-tall statue of Guanyin and placed it in the main hall. It is now the largest indoor Guanyin statue in Asia.

As the ringing bells of the temple fade into the distance, we motor west about 20 kilometers to Zhonghong Village, better known as the village of farmer paintings. 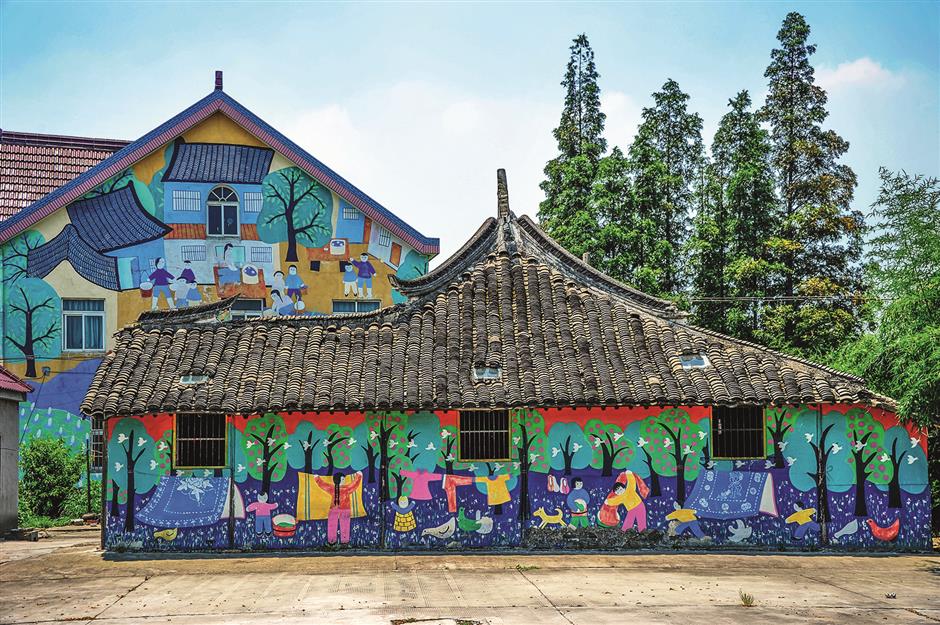 The vibrant colors of farmer art adorn even the dwellings in Zhonghong Village.

It is probably inaccurate to call farmer art a traditional culture of Jinshan because it dates back only to the 1970s.

In 1974, Wu Tongzhang, a local art teacher, started teaching farmers of the area to draw pictures depicting their lives in their spare time. Wu himself had never had any professional training and neither did the farmers. But the farmer artists managed to infuse folk arts into their works. The village subsequently attracted farm painters from other parts of China.

The artwork has become so famous that it has enjoyed national and international exhibitions, and the village itself has been designated a cultural heritage site.

Farmer art is two-dimensional. It is characterized by exaggerated, vibrant colors. The artists portray the daily and seasonal routines of villagers as they plant crops, bring in the harvest, hang quilts out to dry, celebrate festivals or simply sit in kiosks drinking tea and chatting.

The small artists’ colony in Zhonghong Village features homes painted in colourful facades. Some are studios with works of art lining the walls. Artists are often on hand to talk to visitors, who usually can’t resist buying a painting or two. 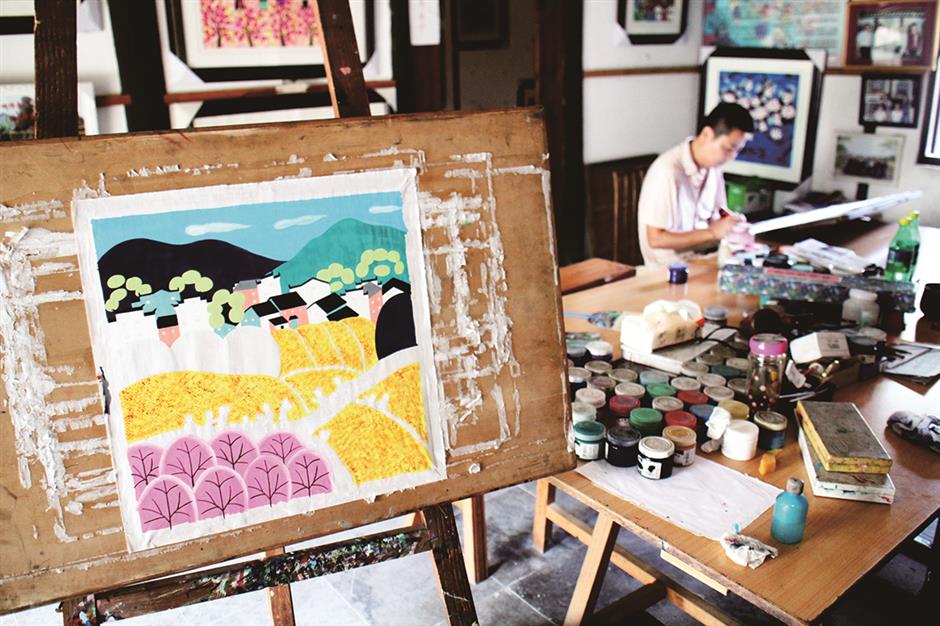 Artist workshops provide visitors a place to view and purchase the celebrated farmer art in Jinshan.

Our trip ends at the water town of Fengjing, about 5 kilometers south of Zhonghong Village.

It’s an ideal spot for a leisure wandering. There are 52 bridges in the town over criss-crossing canals, and narrow meandering footpaths. The oldest bridge dates back more than 700 years.

Fengjing first came into being in the Song Dynasty (AD 960-1279) and thrived during the Yuan Dynasty. The most iconic building of the old town has a 12,000-square-meter courtyard with traditional white walls and black tiles. Part of the courtyard used to be a post office during the Qing Dynasty.

North Street is the best-preserved old street in the town. The narrow streets are so closed in by buildings that it’s sometimes hard to see the sky. This was once a commercial area where merchants sold silk, food, knitwear and other small items. Though the traders are gone, the atmosphere hasn’t changed much. Small shops there sell local food specialties and handicrafts nowadays.

Among the most popular specialities are the local yellow rice wine and pig’s trotters. Many people drive all the way down from Shanghai just to have a meal of the pork and wine.

Jinshan may seem a world away from Shanghai as most of us know it, but the district is being integrated into the Yangtze River Delta region’s cultural family. And with modern rail and road systems, it’s not really all that far from downtown Shanghai any more. 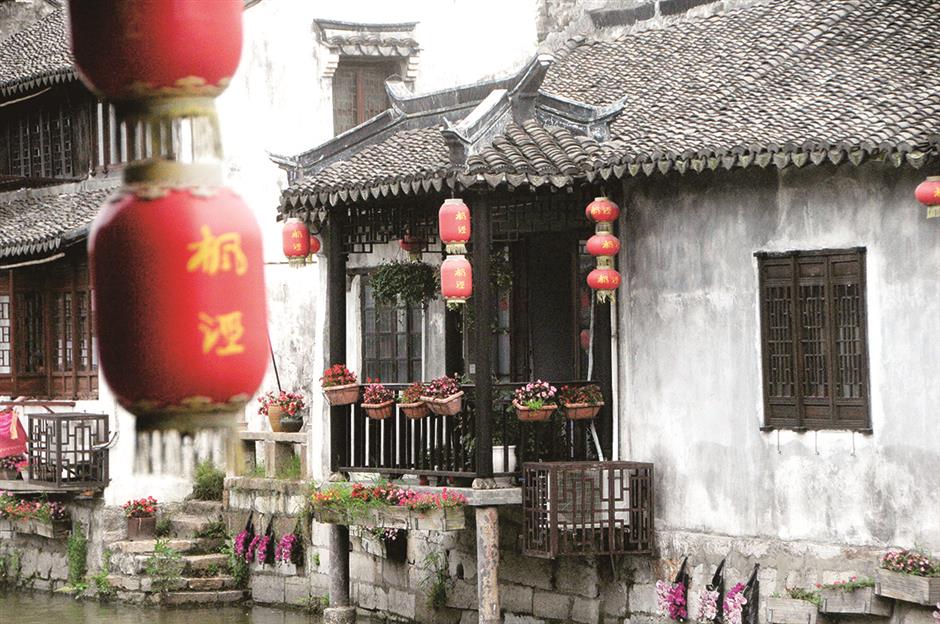 Special Reports
ADVERTISEMENT
61840
,
Shanghai Disney Resort becomes winter wonderland
Exploring farmer art, old-fashion villages
Getaway amid a dreamscape of rice paddies
From the Stone Age to the more modern in a day trip
Fengxian's makeover attracts day-trippers
Get the most out of one day in Jing'an
2021 China Flower Expo coming to Chongming
A day in the life of Changning
Hangzhou landmarks make national protection list
Eco-island a crab, rice and tangerine dream
EXPLORE SHINE