Marshal's Mansion sits a few steps away from the Imperial Palace in downtown Shenyang, the capital city of Liaoning Province.

The Western architectural complex covering an area of 36,000 square meters was the home, office and military command headquarters of Zhang Xueliang (1901-2001), known as Young Marshal, who helped turn the course of Chinese history in 1936 and then spent the next 55 years under house arrest (41 years in Taiwan). Marshal's Mansion in downtown Shenyang, Liaoning Province, is a residential complex with both Chinese and Western architectural styles. The place is well preserved and the artifacts are in good condition.

Son of the powerful warlord and Old Marshal Zhang Zuolin (1875-1928), who effectively ruled northeast China in the early 1900s, the young marshal showed his patriotism, military talents and heavy hand after his father was assassinated by the Japanese army.

In 1936, Zhang kidnapped his commander-in-chief and head of the Kuomintang Chiang Kai-shek (1887-1975) at a hot-spring resort near Xi'an, Shaanxi Province, and forced him to form a united front with the Communist Party to fight against the Japanese aggression spreading across the country. Chiang agreed, but when he had an opportunity, he seized Zhang.

This was a pivotal moment in modern Chinese history, and the "Xi'an Incident" Zhang engineered landed him in prison for more than half a century.

The young marshal never returned to his Shenyang mansion, a place where he spent his youth.

His statue stands high on the front plaza of the main entrance, gazing into the distance. The mansion is designed in Chinese Siheyuan (a historical type of residence) style with three courtyards, a house and office area. It's said the old marshal had a strange regulation that everyone must stride over the threshold; those who stepped on it would be immediately executed. 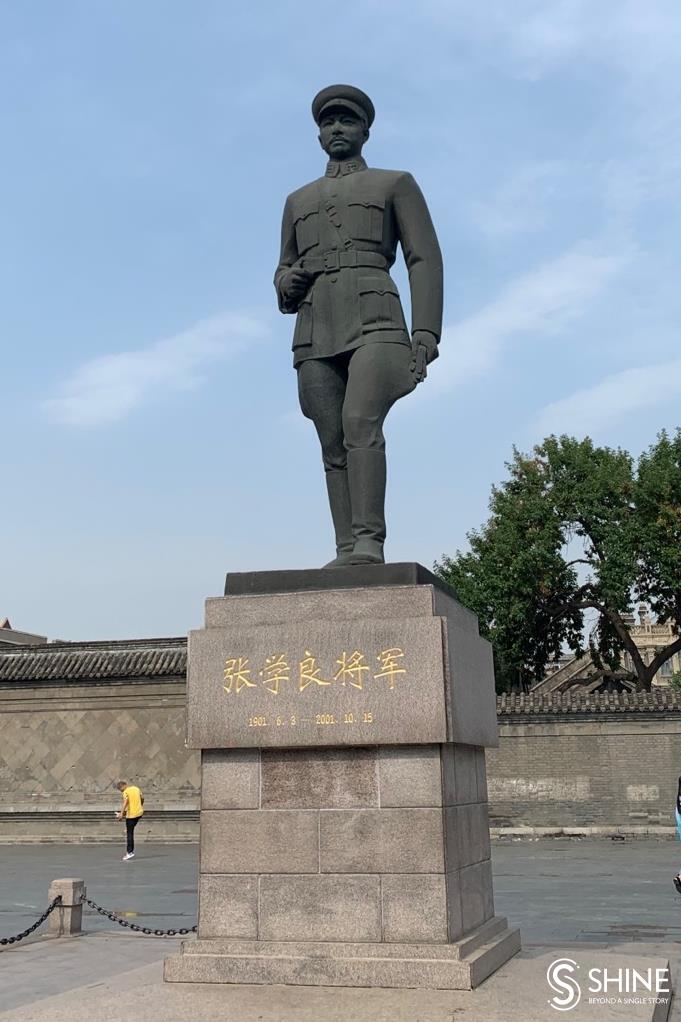 A statue of Zhang Xueliang at the Shenyang Marshal's Mansion

When the family grew, two new buildings were built – the big and small green house, owning their names to the green bricks on the exterior walls.

The big one, built in 1922, is designed in European palace style with carved beams, painted rafters and marble pillars. Each room was intended as a suite, fully furnished and decorated.

This was where Zhang had meetings and made important military decisions, as well as killed two high-ranking officials, Chang Yinhuai and Yang Yuting, in 1929.

The two planned a coup d'état to wrestle power from the young marshal when he succeeded his father as the leader of the Northeast Army just after the Old Marshal's assassination.

It was in the third meeting hall that Zhang ordered the execution of the two officials. As the building once housed a Siberian tiger specimen, it was also called the Hall of Tiger.

As the second-tallest building in northeast China at the time, the spacious patio on the top level was once a perfect place for a bird's-eye view of the city.

A mini garden with trees and flowers is situated in front of the building. The central rockery that faces the main door was specially designed by the Old Marshal, which also served as a protective blockhouse.

The residence of Edith Chao (1912-2000) is in the mansion's eastern section. Chao lived there from 1928-30 as the Young Marshal's girlfriend, even though he was married to Yu Fengzhi at the time. The free-standing house covers an area of 547 square meters, featuring both traditional Chinese mural painting and Western-styled carvings on the posts and beams.

Chao accompanied Zhang throughout his 50 years of house arrest, and the couple's love story was seen as one of the greatest in the history of modern China.

Since 2001, the space has been open again to the public after a renovation project. The meeting hall, ballroom, dining room, piano room, study and office were all refashioned to their original appearance.

﻿
Special Reports
﻿
61865
,
Historical mansion full of intrigue
Cruise provides a luxury West Lake travel
Jiuzhai Valley returns, better than ever
People and nature co-exist in urban habitat
Coastal area proud of its beauty, history and southern 'Great Wall'
Autumn heralds start of Hangzhou persimmon festival and themed fair
A sparkling past and a bright future: basking in the glow of The Central
A walk through Xuhui to take in city's memorabilia
New gallery showcases art from home and abroad
Three villas: a tale of wartime skullduggery
EXPLORE SHINE