Hangzhou will build a world-class ecological and cultural tourism corridor in tandem with Anhui Province's Huangshan City. Five towns in Hangzhou's Chun'an County and five towns in Huangshan's Shexian County are included in the plan.

In ancient times, Chun'an and Shexian were part of Huizhou region where the Xin'an River runs through. Dating back to the Tang Dynasty (AD 618-907), a trail linking Hangzhou's Tianmu Mountain and Huangshan's Yellow Mountain was formed to exchange commodities between the two regions.

For years, Hangzhou and Huangshan have preserved their distinctive architecture and local ways of life in old villages, making this area popular with tourists.

The villages have resisted the winds of change that swept across many other parts of China. In addition to architecture, the natural environment is also being protected, with sewage being treated and new infrastructure being built.

These improvements are attracting more tourists and creating an engine for the local economy. Under the new plan, the two cities will look at tourism resources including old villages and ancient trails, upgrading facilities and infrastructure to attract more visitors.

For those who love hiking, jogging or cycling, the Thousand Islands Lake in Chun'an County is an ideal destination as it boasts 1,078 islands, winding roads and charming villages. 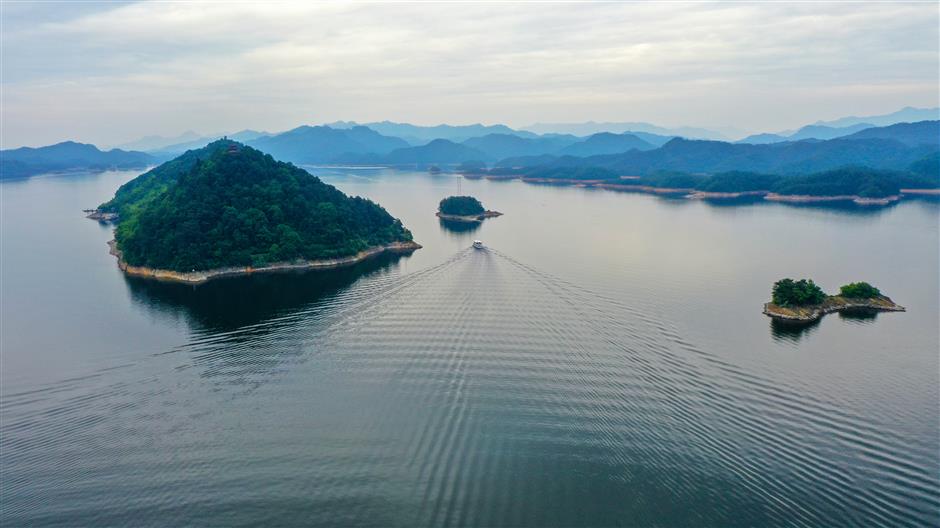 Thousand Islands Lake in Hangzhou's Chun'an County has attracted those who like hiking, jogging or cycling.

Yellow Mountain, famous for its peculiarly shaped rocks, cloud-shrouded peaks, pines and hot springs, is a heaven for outdoor aficionados.

In addition to promoting these scenic sites, the corridor plan highlights the protection of the environment. Hangzhou will also increase forest coverage along the river in partnership with Huangshan.

When President Xi Jinping was Zhejiang's Party Secretary in the early 2000s, he developed the concept of "Lucid waters and lush mountains are invaluable assets" to highlight a harmonious, symbiotic relationship between ecological protection and economic development.

Huangshan and Hangzhou are going to build a landscape of "lush mountains" with the prospect of "lucid waters," developing sustainability to promote people's wellbeing and preserve the natural environment.

The Hangzhou-Huangshan High-speed Railway, which started operation in 2018, allows tourists from Shanghai and Ningbo and Nanjing to access this area easily.

Formerly, it took hours of driving from these cities to reach the lake, river, mountains and villages.

The bullet train has cut the journey down to half an hour, giving a boost to the development of a world-class ecological and cultural tourism corridor.