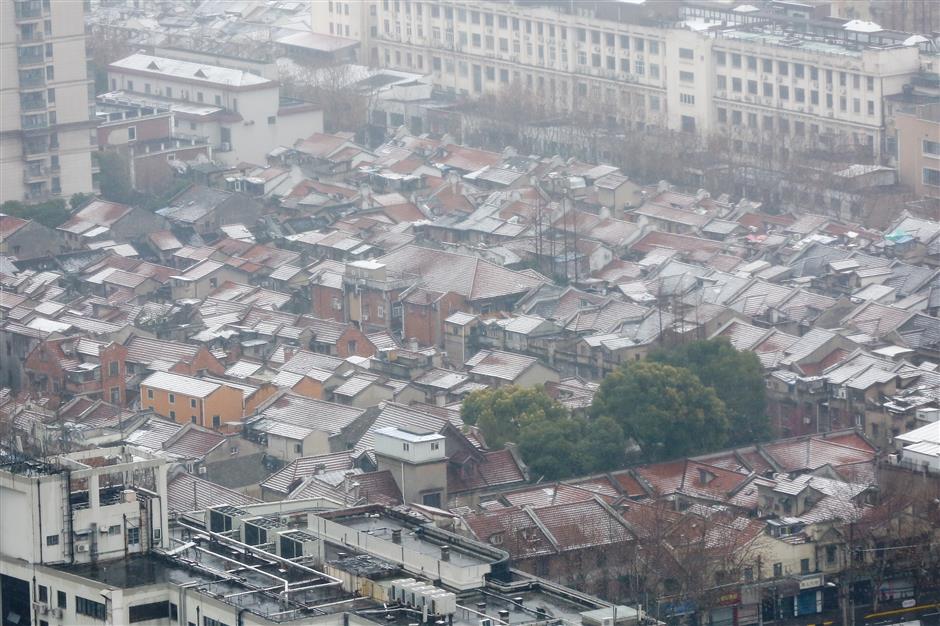 A yellow road icing alert, lowest of the three-scale system, was issued by the Shanghai Meteorological Bureau at 9:04pm, warning that the streets could freeze within 12 hours that may affect traffic this morning.

During today, 6 to 10 millimeters is expected to fall — indicating heavy snow — in the city’s western and northern areas, with 3 to 5 centimeters of snow accumulating on roads.

Meanwhile, icy winds will lower temperatures, falling to zero degrees Celsius in downtown areas and minus 2 degrees in suburban areas, according to Shanghai Meteorological Bureau.

The snow will cease tomorrow, but it will remain cold. Over the weekend, there will be drizzle, and temperatures will start to climb a little, with the low up to 3 degrees and the high up to 5 degrees, forecasters said.

Monday is expected to be overcast to cloudy with temperatures hovering between 1 and 3 degrees.

Bridges and elevated roads are likely to have icy stretches, and drivers are warned to take care. Pedestrians are urged to avoid walking under outdoor billboards.

Shanghai Shentong Metro Group will bolster operations during blizzard conditions. More officers will be sent to elevated Metro stations or lines that run through remote suburban areas such as lines 11, 16 and 17 to ensure safety.

All pipes and overhead line systems that provide electricity for the trains have been examined and wrapped to prevent frost damage. 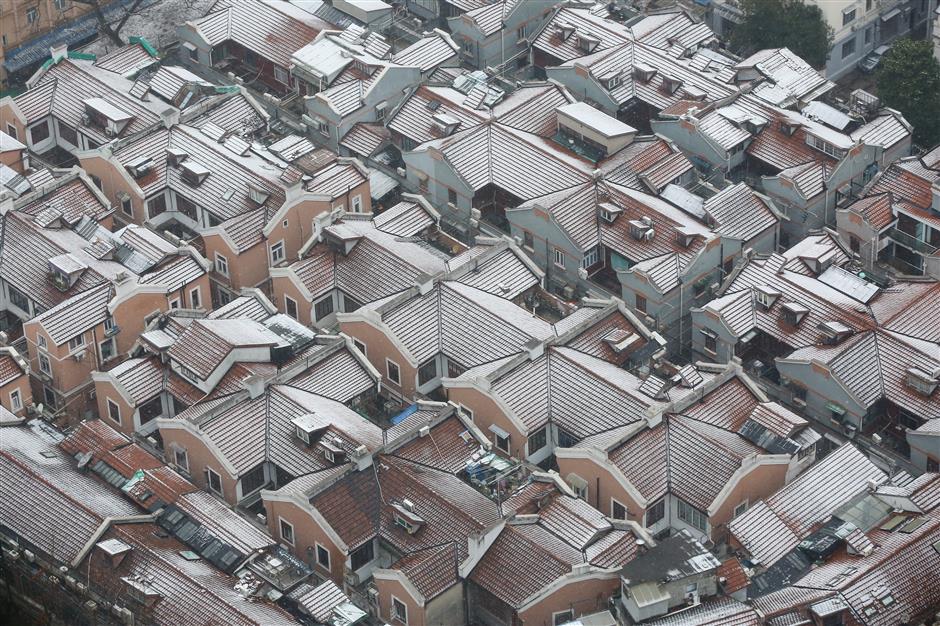 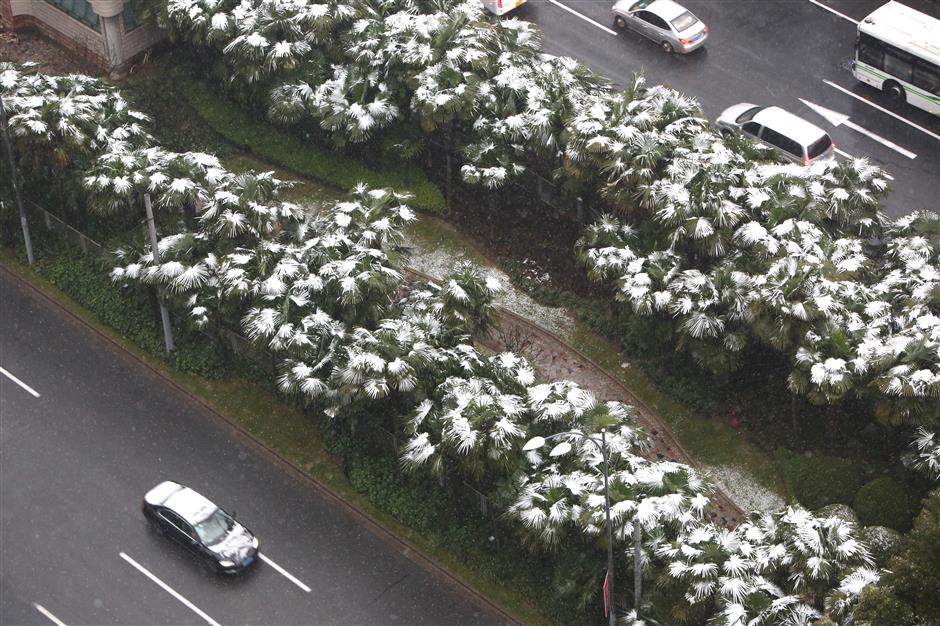 Plants some of the city's greenery areas are covered with snow on Thursday morning. 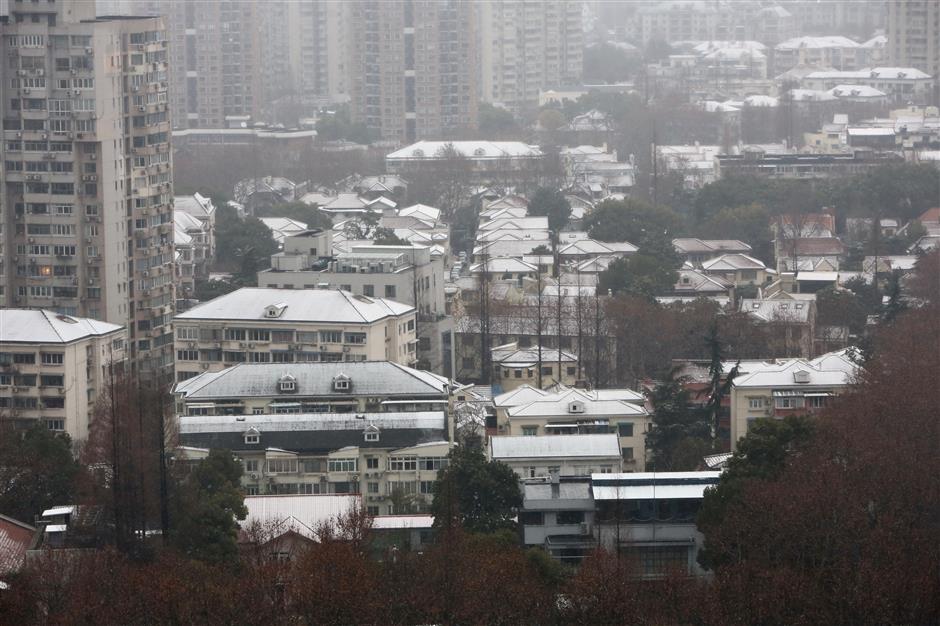 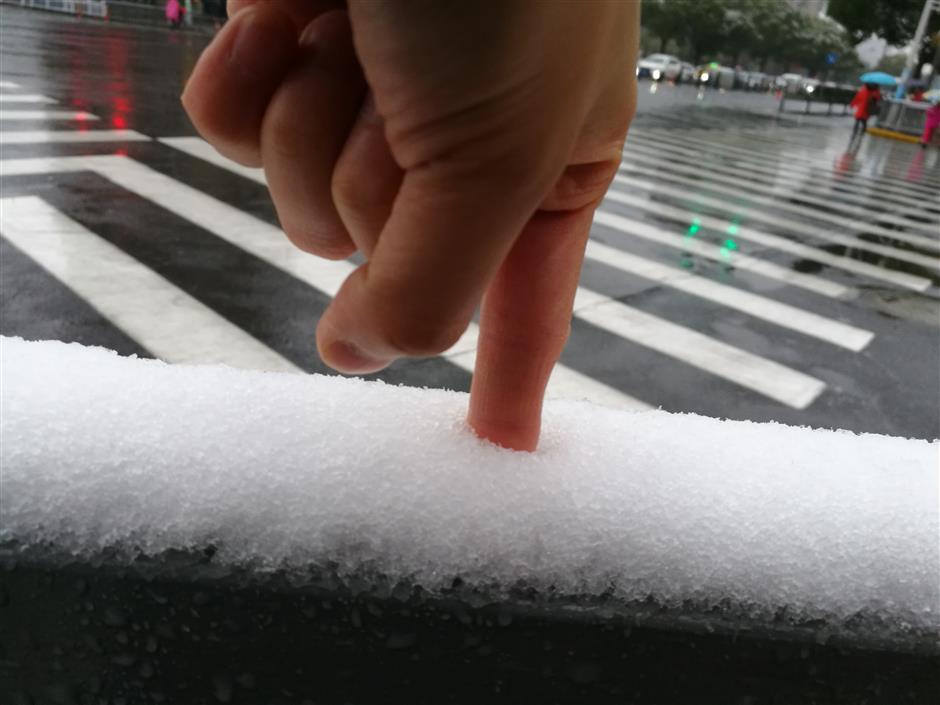 A Shanghai Daily reporter puts her finger into the snow on a guardrail in Jiading District on Thursday morning. 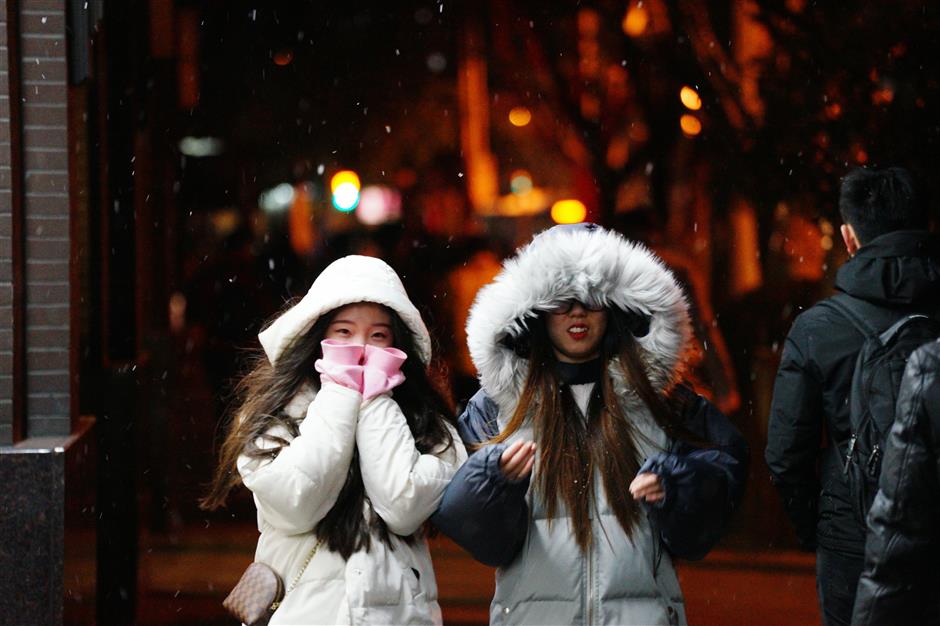 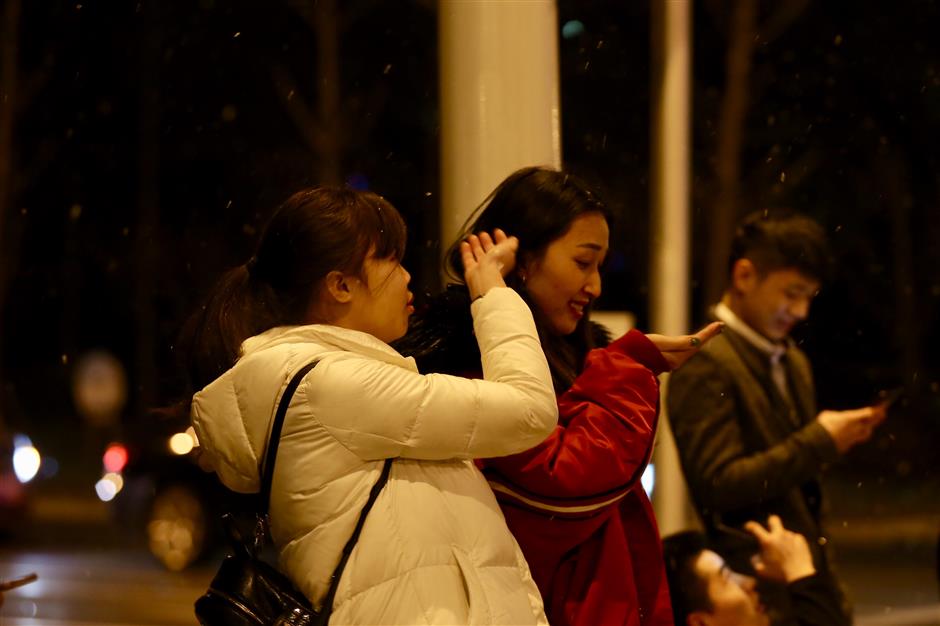 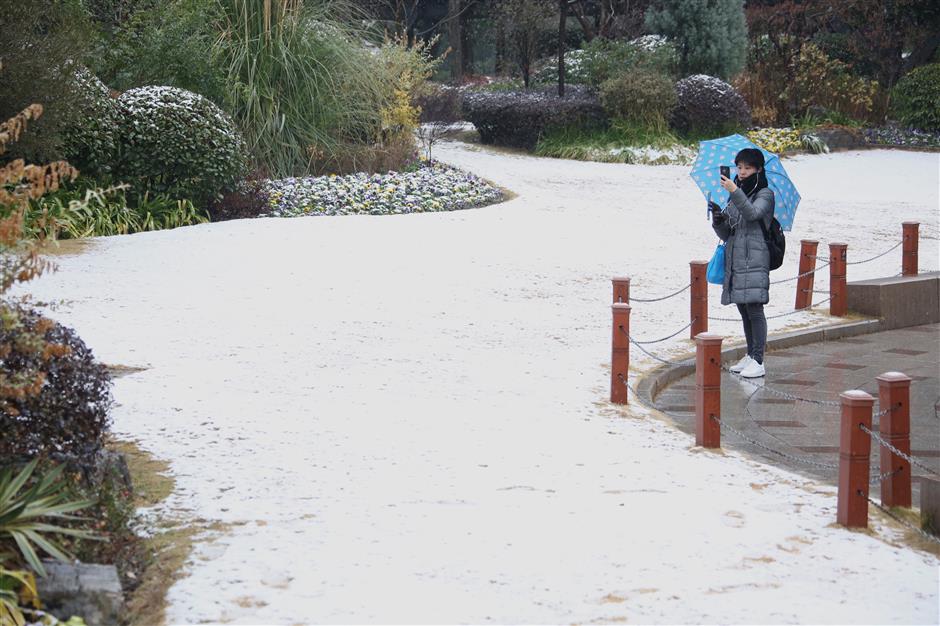 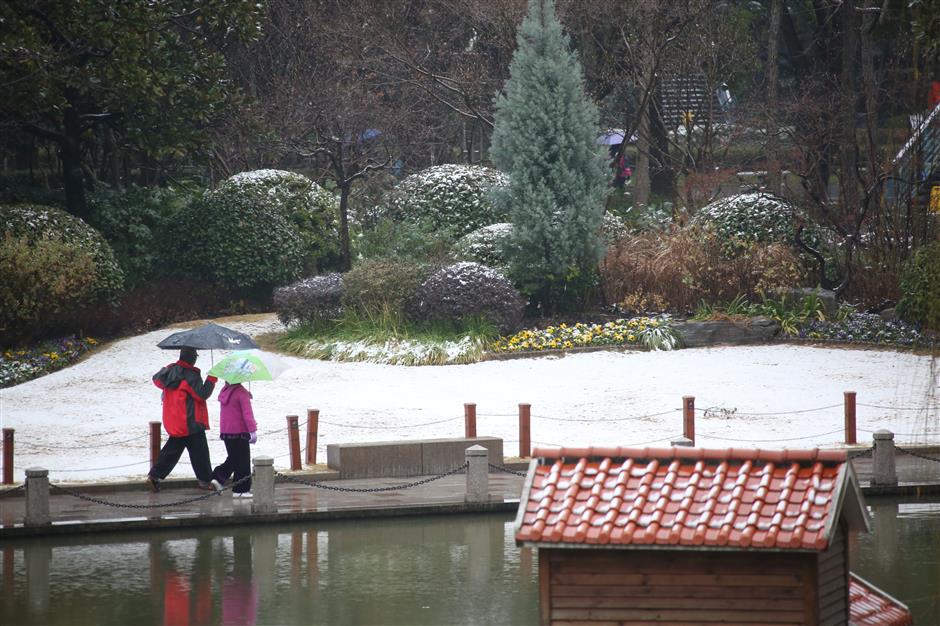 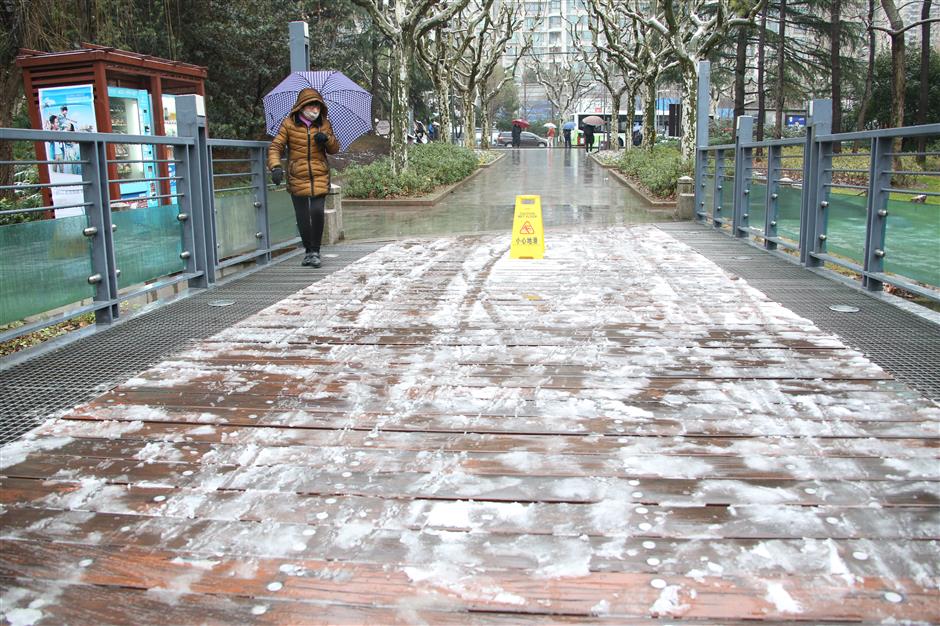