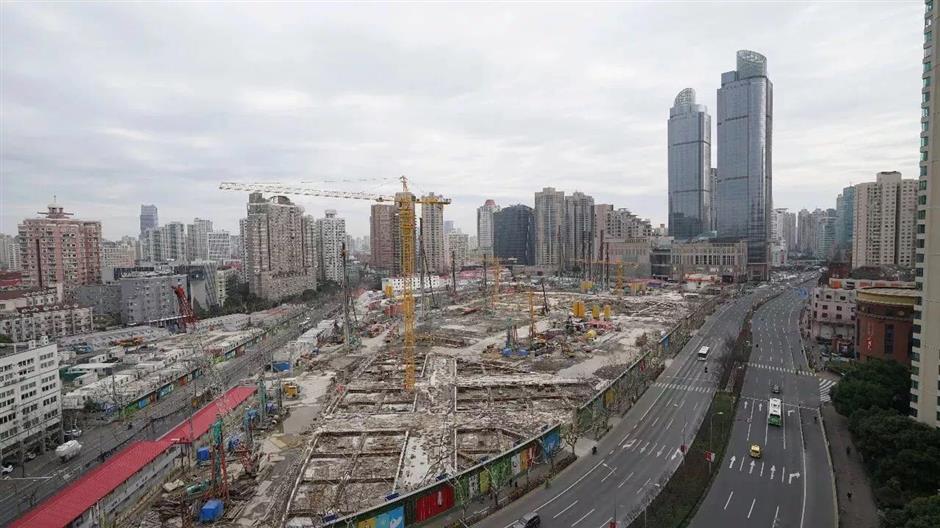 Some 4,700 cubic meters of concrete have been poured into the basement for the Xujiahui Center project over the Spring Festival holiday, marking a milestone for the project.

Xujiahui will have a new downtown landmark when the tallest building west of the Huangpu River is completed around 2023.

Construction has started on the basement of the building after 4,700 cubic meters of concrete were poured into the basement for the Xujiahui Center over the Spring Festival holiday that ended on Wednesday, marking a milestone for the project, the Xuhui District government said over the weekend.

Dubbed the last core site for development in Shanghai, the complex covers a total floor area of 782,000 square meters, twice as large as the Shanghai World Financial Center in the Pudong New Area. It will comprise three skyscrapers, including a 370-meter tower on Hongqiao Road and Yishan Road N., west of the landmark Grand Gateway Plaza.

The 70-story iconic office building will surpass the 320-meter-high building in the Magnolia Square complex in Hongkou District to become the tallest structure in Puxi, according Shanghai Construction No. 1 Group, which is in charge of the construction.

It will become the fourth tallest in the city after the 632-meter Shanghai Tower, the 492-meter Shanghai World Financial Center and the 420.5-meter Jinmao Tower in Pudong’s Lujiazui area.

The Xujiahui project will also include a 43-floor office building, a 15-floor luxury hotel and seven floors of shops, restaurants, art galleries and theaters.

These buildings will connect with each other by skywalks covered by a transparent membrane and also with the existing Xujiahui commercial zone, according to blueprints on the project.

The project is set to be completed in phases around 2023, according to Hong Kong’s Sun Hung Kai Properties Ltd, the developer on the project.