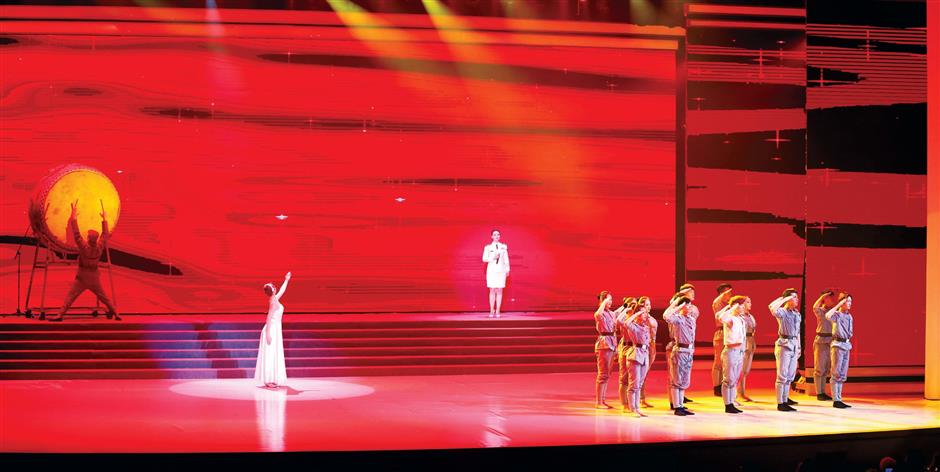 An opening show of the Qianxi Art Festival. The month-long feast features four special cultural events for the residents of Dachang Town.

AN art festival has kicked off in the historic Dachang Town, in north Shanghai’s Baoshan District, to present art performances and promote the town’s cultural heritage.

The month-long festival named after Qianxi, the town’s historic name some 1,800 years ago, was launched on April 8, featuring four special cultural events for its residents.

Famous artists including Liao Changyong, a world-renowned baritone, Gu Haohao, director of the Shanghai Kunqu Opera Troupe, and Hua Wen, director with the Baoshan Huju Opera Troupe performed at the opening ceremony of the festival at Shanghai University.

The evening gala, which is also the first major event for the festival, showcased the historic spirits of Dachang — united, enterprising, responsible and striving for excellence, according to the township government. The gala is also part of the folk and international art festival of Baoshan District.

With singing, dances and opera performances, the carnival introduced the history of the town along with its cultural deposits, as well as boasted its prosperity and achievements nowadays.

As a highlight, the amateur Qilian fashion team and the Dahua dancing group, composed of town residents, performed together with Liao and other famous artists at the opening event.

“The art festival has not only brought art and culture to the community but also let us better understand the cultures of Baoshan and Shanghai,” said a member of the fashion team from Qilian No.3 Community.

Throughout the festival, the township government also invited famous artists and scholars to give lectures about local culture and history as well as interact with the audiences. Exhibitions and performances were held featuring cultural heritage skills developed in the town.

Several warm-hearted locals were invited to tell their stories. They included Su Jincheng, a professor with Shanghai University, who has been devoted to community services in the last two decades, and a local couple who donated 800,000 yuan (US$12,754) to support over 20 orphans who survived the deadly Wenchuan Earthquake in southwest Sichuan Province in 2008 to finish their education.

Dachang has been organizing such art festivals annually since 2015 to promote its history and cultures.

The town covering some 27 square kilometers was formed around the Liang regime (502-557) during the Southern Dynasties. It was named Dachang, which literally means “large site” during the Song Dynasty (960-1279) because it served as a major salt site.

The town had been a busy port around the 7th century as the mouth of Wusong River. The cotton and cloth manufactured was transported to neighboring Zhejiang, southeast Fujian provinces and even abroad. It became a prosperous business town in the mid-Qing Dynasty (1644-1911), featuring over 300 stores trading cloth and cotton. It is said its markets opened through midnight every day.

The town gained its reputation as “Iron Dachang” after a swathe of blacksmiths opened workshops along the riverside to mainly serve business ships bustling along the transport hub.

During the Songhu Battles in 1932 and 1937, Chinese armies fought fiercely against the Japanese invaders in the town. The Japanese air force dispatched 150 bombers to shell the town into debris. Local citizens erected a memorial archway in the town to commemorate the sacrificed Chinese soldiers. A pillar of the archway has been kept in its original place now.

Another major historic site in the town is the foundation of a smoke tower built in 1129 by a famous general in the Song Dynasty Han Shizhong (1090-1151), who devoted his life to fighting invaders. 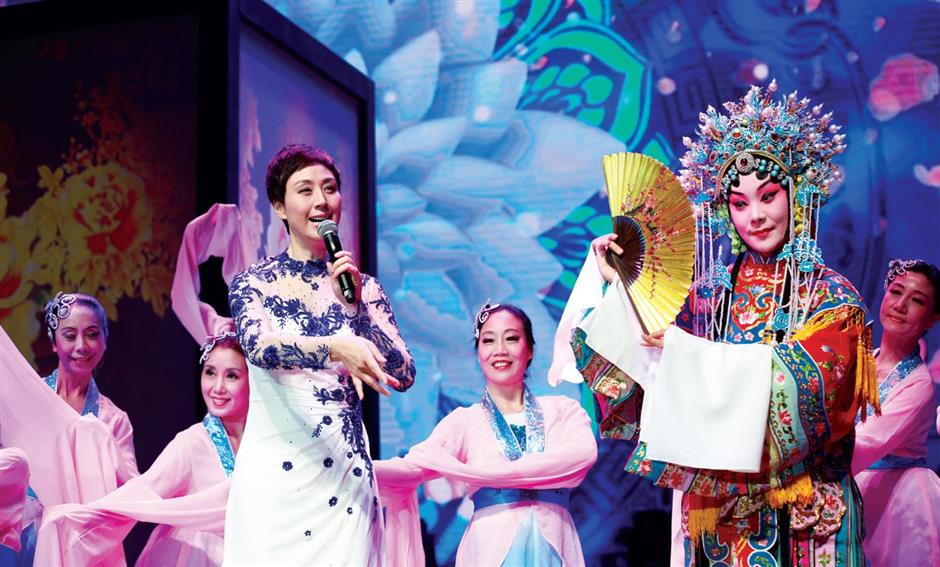 Renowned Peking Opera artist Shi Yihong sings an extract from the new opera creation “The Ode to the Peach Blossoms.”

Nowadays, the historic town is targeted as a major culture and innovation center. The town has had cultural industrial parks covering a total of 750,000 square meters.

A lot of research and development centers and headquarters with global influence are based in these parks.

The X-Thought and Langmiao Culture, for instance, the two local developed culture firms, were invited to organize the art festival and events this year. In spite of the tight schedule, they co-operated with the township government to arrange a batch of quality cultural performances for the festival.

In one eye-catching show, the organizers used 10 cutting-edge projectors to create a three-dimensional immersive experience to allow audiences learn the history and spirit of the town.

“The district and township governments have created an ideal business environment in Baoshan for us, which is greatly helpful for our future development,” a senior official with X-Thought said.

The festival is also part of the Baoshan government’s effort to turn the traditional iron-steel base into a culture and art center.

The Baoshan government has launched two public art projects to invite nearly 100 famous artists and scholars to perform and promote traditional cultures among the residents.

The district has organized over 16,200 cultural activities last year, which attracted over 2.6 million audiences, a 37 percent increase year on year, the government revealed.

Baoshan has established a league among 36 museums to make it more convenient and popular for residents to visit.

The district’s revenue on culture and innovation industries has reached 15.4 billion yuan (US$2.45 billion) in 2017, a nearly 30 percent increase year on year.

The district plans to further develop and promote its culture about the history of the Communist Party of China, Shanghai-style culture, as well as jiangnan Culture, which is developed in the south of Yangtze River.

It aims to create an optimized business environment for outstanding cultural enterprises and offer “fertile soil” for literary and artistic creation, the Baoshan government said.