Shanghai's famous historic sites can be accessed with QR codes 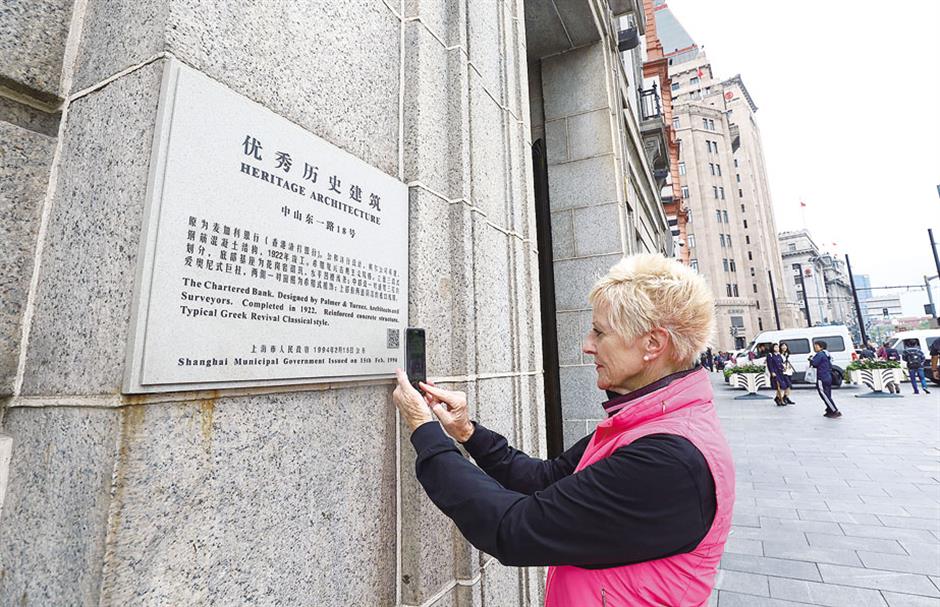 Kaye Harris from Australia scans the QR code on a heritage building at the Bund yesterday.

More than 1,000 historic buildings and protected areas in Shanghai will have QR codes that will allow people to read or hear the stories behind the structures and the roads, the city’s tourism authorities said yesterday.

Tourists and history enthusiasts can read the bilingual texts, check out the pictures — both old and new — and listen to the audio or watch the videos simply by scanning the code with their smartphones.

On the list are 1,098 heritage buildings, 265 former residences of famous personalities, 44 localities and 77 community blocks with a tinge of history, the Shanghai Tourism Administration said.

“Architecture can be read, while blocks are where people can take a stroll,” said Xu Weiwan, director of the administration.

“There are many stories worth hearing — of garden villas, shikumen (stone-gate) houses inside old longtang (alleyways) and buildings of different architectural styles.”

Some districts are already ready with the project. The history behind the 22 heritage buildings along the Bund in Huangpu District can be read in both Chinese and English.

“It helps the tourists to understand the city better and appreciate everything rather than just walk past it. Now we can read a bit of history and also understand the background,” said Kaye Harris, a traveller from Australia.

“I do like history, and I like to see how we have developed from that history to now,” she said.

However, Harris said Wi-Fi for foreigners was an issue.

“I have seen this QR code on other buildings, but I need Internet access for it.”

Anne Panchaud, another tourist from Canada, said she enjoys historical tales during her travels.

“But I need help from the local people. Foreigners don’t have access to the phone data. I can’t open the website and can’t do anything about it,” said Panchaud.

Xuhui District has nearly 80 historic buildings in the list. In some villas of famous people on Wukang Road, a VR guide is also available.

Other places where the QR codes can be used are the site of the Second National Congress of the Communist Party of China, the Shanghai Natural History Museum and Jing’an Temple.