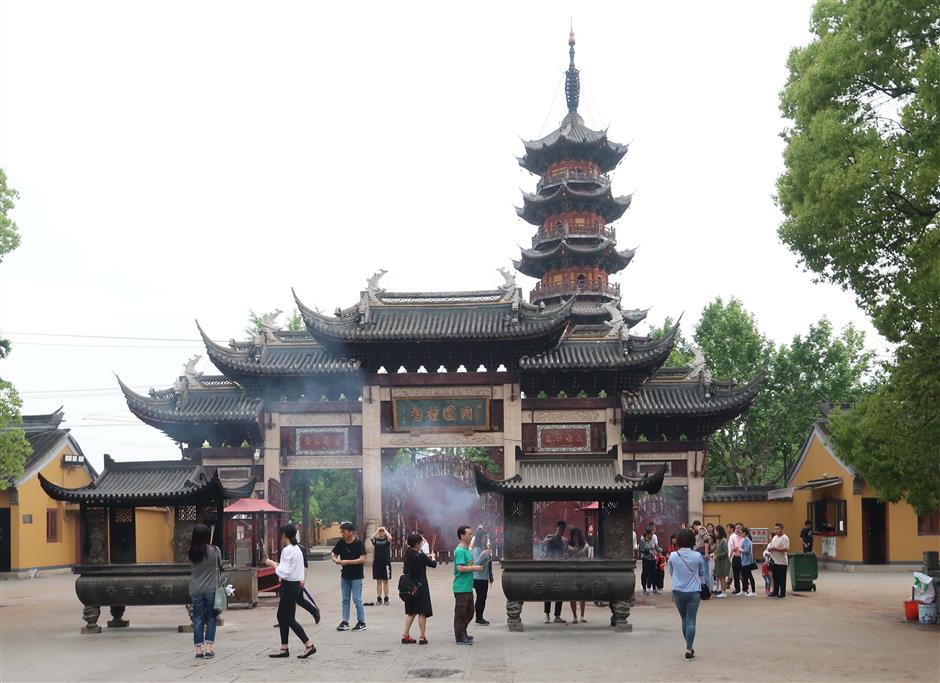 The Xuhui District government is calling for the protection of ancient cultures that originated at the city’s famed Longhua Temple.

It has applied to the Shanghai Cultural Heritage Administration to add Longhua Zen culture, including Zen-related meditation, speech, music, art, tea and food, into the city-level cultural heritage to ensure its influence among the younger generation.

“The listing of the Longhua Zen culture can help the young to learn about traditional cultures and the history of the city,” said Gao Mingchun, president of the Shanghai Intangible Cultural Heritage Protection Association.

The 400-year-old fair at the Longhua Temple also needs urgent attention after the Longhua Town, named after the temple, was encroached upon by developers, Gao said.

Though the temple fair was added to the national-level intangible cultural heritage list in 2008, many of the original inhabitants and visitors, who had an emotional bond with the fair, had been relocated, thus taking the shine away from the annual event.

Over the weekend, the Xuhui Culture Bureau invited 10 experts and government officials to discuss ways to protect a local culture of the city.

The area around the temple in the southwest of Xuhui District has been declared a historical and cultural conservation area. Part of the cultural relics in the region originated from the Three Kingdoms period (220-280).

Sun Quan, the founder and emperor of Eastern Wu, built the Longhua Pagoda to store Buddhist relics. The 40-meter-tall pagoda was rebuilt in the Northern Song Dynasty (960-1127). The temple, which was built shortly after the pagoda, has a history of over 1,700 years, making it one of the oldest and largest Buddhist temples in Shanghai.

The temple, along with pagoda, was listed as one of the eight major sights of Shanghai, but, sadly, is the only one remaining right now.

“This cultural heritage has been challenged by rapid urban developments in the surrounding areas,” according to Liu Quili, president of the Chinese Folklore Society.

The historic pagoda, for instance, was once admired for its beautiful reflection in a river by a peach forest, but neither the river nor the forest exist now.

Also, modern industrial production has made daily commodities easier to purchase, so buying at the temple fair is no longer necessary for residents, said Chen Qinjian, a professor at the East China Normal University.

The temple fair was introduced during the Ming Dynasty (1368-1644) for worshipers who would visit the temple around March to commemorate Maitreya Buddha, who is said to have given sermons in the temple. The fair gradually developed into a prosperous trade market in East China.

“I can still remember the happiness I felt while visiting the Longhua Temple fair, eating traditional snacks and buying handicraft,” Chen said.

He suggested creating modern cultural products based on traditional skills and folk arts of the Longhua area and promoting them.

Liu said the history and cultures should be promoted in the neighborhood to get them more involved in temple events.

Zheng Shiling, an architectural expert and a member of the Chinese Academy of Sciences, said it is also important to preserve the historic environment of the communities nearby in order to protect the cultural heritages. The shopping malls near the temple must not be taller than the pagoda to protect the general atmosphere of the Longhua area, Zheng said.