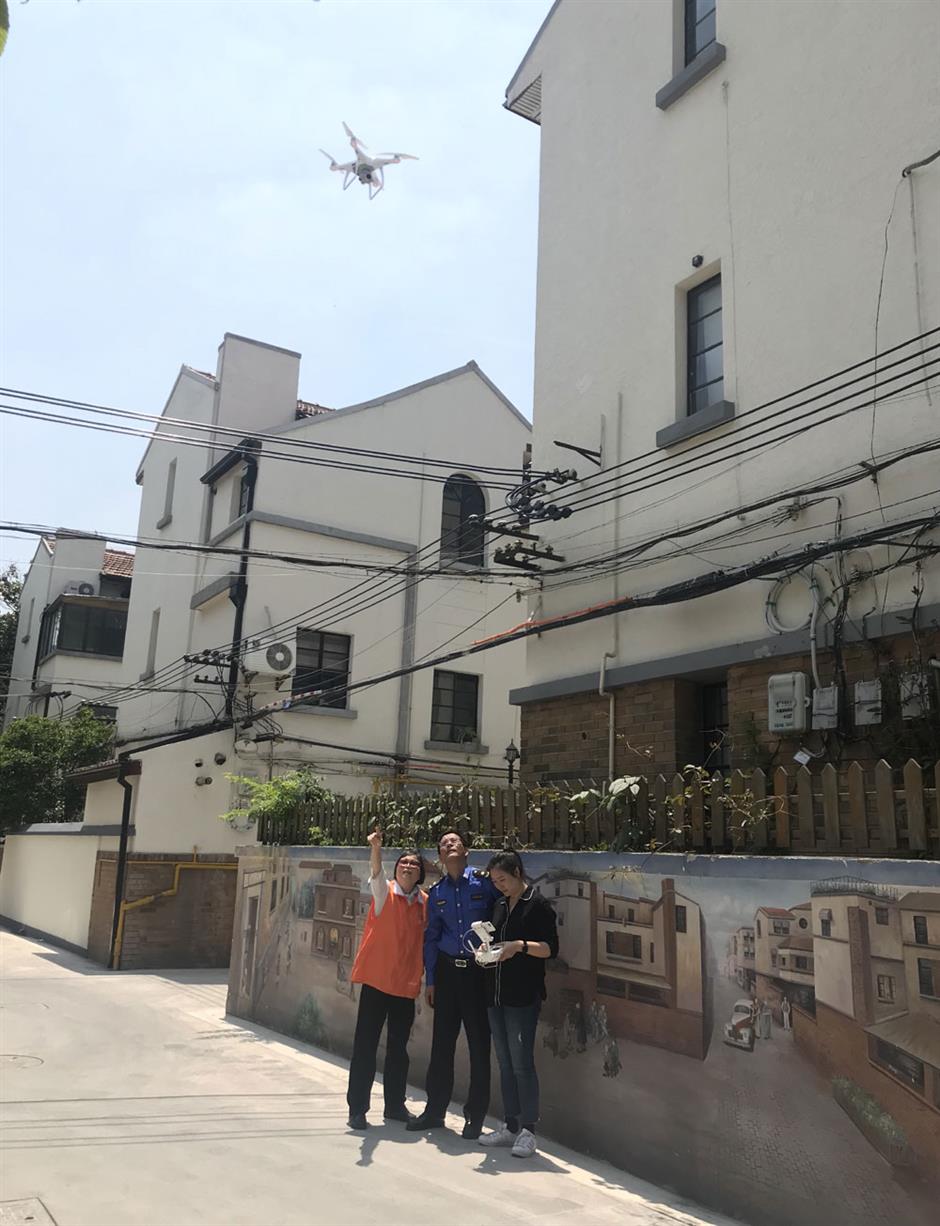 Local officials use a drone to check the condition of historical buildings in the Yuhua Xincun neighborhood in Jing’an District. 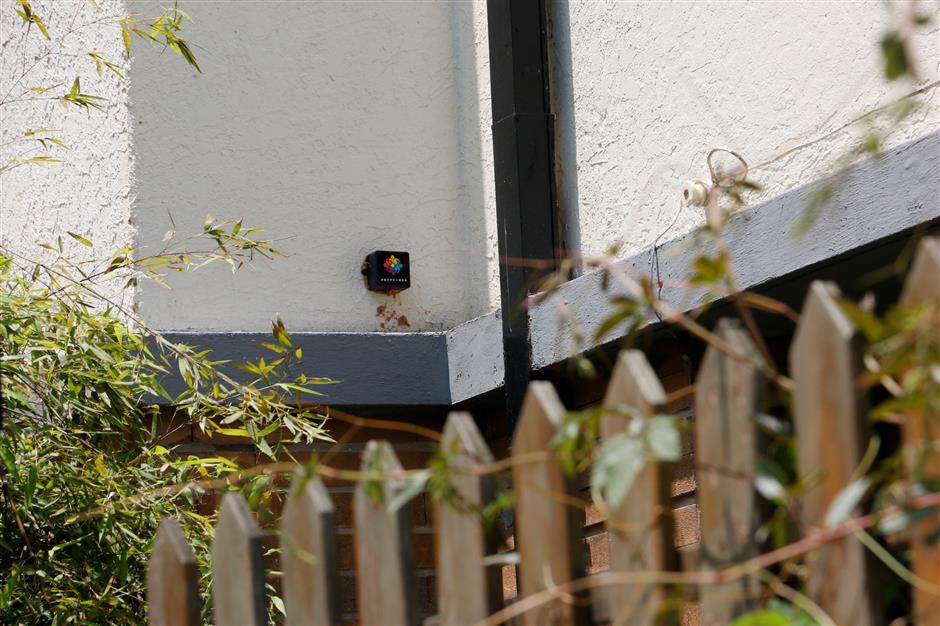 Sensors have been installed on historical buildings to detect any illegal construction activity.

Officials in downtown Jing’an District are tapping into modern technology to save the old.

Jing’ansi, a subdistrict with many historical buildings, has installed sensors on old buildings to hear disruptions and uses surveillance drones as eyes to ensure that heritage is protected.

Stretching over 1.57 square kilometers — from Fumin and Changde roads in the east, Zhenning Road (west), Changle Road (south) and Xinzha Road (north), about 85 percent of the area features more than 370 landmark structures and is part of the city’s protected historic and cultural zone.

It’s not an easy task to preserve historical buildings when they are inhabited by people, according to Hong Xuegang, deputy director of the subdistrict.

“Owners often move out and rent their units,” he said. “When we need to have documents signed related to maintenance or renovation, or to gain access for inspections, we can’t always find the owners easily.”

One concern is illegal construction that damages the original heritage of a building. Officials can’t just barge their way into an apartment if they get a tip about possible violations but have no direct proof.

Now, historic buildings can speak for themselves.

Since last November, the subdistrict has installed nearly 300 sensors on the facades of 37 historic buildings. Each sensor is the size of two matchboxes and is connected to a big data analytics platform.

Alerts are triggered if vibrations in a building are detected.

“Officials will rush to check whether the alarms signal illegal construction or other violations,” said Hong.

So far, community officials have intervened in 23 valid alerts, arriving in time to prevent damage to buildings.

In addition to the sensors, there are two drones that fly over the historic buildings as part of routine patrols. They can capture and record violations.

“We often can’t just step into residents’ gardens or climb up to rooftops,” Hong said. “The drones do surveillance for us and can provide photographic evidence of violations.”

In one recent example, local officials learned of construction going on inside a protected building. When they went to check, the owner said he was just repairing a leaking roof.

Drones were flown overhead to take photos. By comparing the pictures with archived plans of the building, officials were able to ascertain that the owner wasn’t destroying a heritage roof.

Hong admitted that some people fear loss of privacy when drones are used in surveillance.

“Indeed, there are some concerns,” he said. “We don’t fly drones close to people’s windows. We always use drone operators who are trained and licensed.”

Sensors and drones may be high-tech “eyes” on old buildings, but local residents are still the gatekeepers. Neighborhood volunteers patrol around the buildings daily to ensure that violations like illegal construction don’t occur.

“Previously, many residents weren’t aware that they were living in a building of historical importance,” Hong said. “But now they know, and they clearly value their homes even more.”

Shi Xianghong, 61, is one of the more than 10 volunteers who keep an eye on illegal construction. The volunteer team was set up more than a year ago and has proved to be a success.

“I have lived in Yuhua Xincun neighborhood for more than 30 years, and love the historical buildings and the nostalgic ambience here,” she said.

“Some of my neighbors have rented out their units to others who don’t value the historical facades and the old interior decorations. They like modern decoration and replace the old with new.”

“Once we found iron rods in the lane and we reported it to the authorities. On investigation, they found that the tenant was preparing to build an attic without getting approval. We helped to prevent it,” she said.

“At present, work to protect these relics isn’t perfected,” said district director Lu Xiaodong. “We have to pay more attention to preventive measures instead of just relying on rescue efforts in the aftermath.”

This year, 170 historic buildings in Zhangyuan Garden will be given ID cards that provide information on their age, history and condition. Work on Jing’an Villa, Anlefang and Garden Apartment will start in coming months.

The district is also tapping the memories of older residents to record the history of old buildings and neighborhoods.

The Jiangning Road Subdistrict compiled a book based on interviews with local residents. It included 37 paintings of 24 missing or surviving iconic spots.

The Shimen Road No. 2 Subdistrict collected family treasures from residents and displayed them in the city’s first museum of lane house heritage.