Temperature to soar, may touch 36 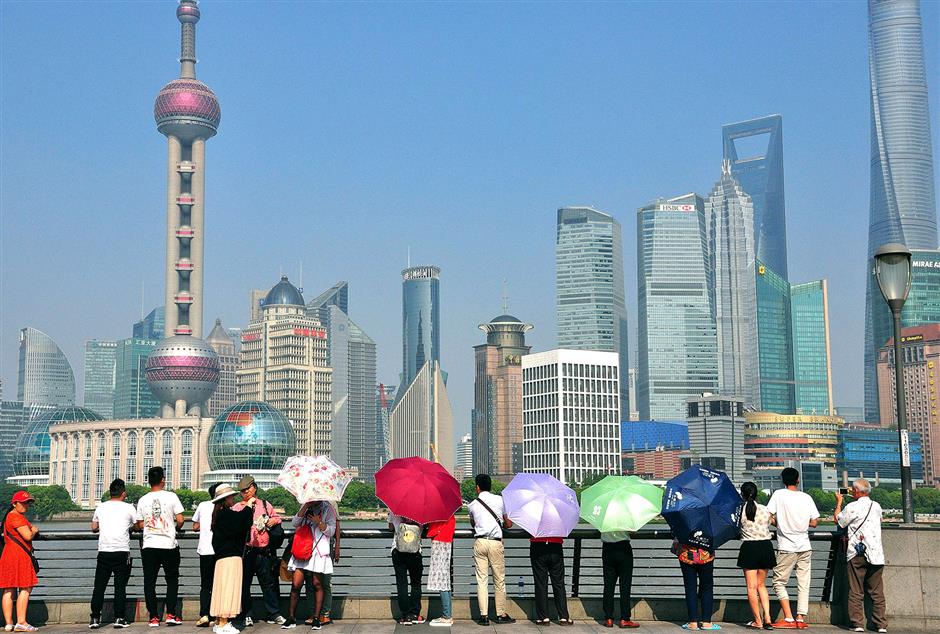 Tourists use umbrellas to shelter from the scorching sunshine on the Bund in Shanghai yesterday when the city issued this year’s first high temperature alert.

Temperatures are set to soar further in the city today with the high predicted to touch 36 degrees Celsius in downtown areas and 37 degrees in Baoshan and Jiading districts.

The Shanghai Meteorological Bureau had issued a yellow high temperature alert yesterday, the lowest of a three-tier warning system, at 12:03pm, with forecasters predicting temperatures to touch 35 degrees in suburban Jiading, Baoshan, Qingpu and Chongming districts.

The mercury had climbed to 25 degrees by 7:15am yesterday.

At 2:30pm, the benchmark Xujiahui weather station had recorded a high of 34.2 degrees. Jiading recorded 35 degrees, becoming the first district in the city to record “high temperature day,” or touching 35 degrees or higher.

The yellow alert yesterday was lifted at 4:30pm when the temperature started to drop.

Yesterday was the third time when the temperature had touched 30 degrees. On Monday, Xujiahui had recorded 31.3, and on May 1 it was 31.2.

It will hover around 34 degrees tomorrow, the weather bureau said.

Light ozone pollution was recorded yesterday, and is likely to remain today and tomorrow, according to the city’s environmental monitoring center.

A cold front will bring down the mercury on Friday to 31 degrees. Over the weekend, it will drop to 25 degrees, and the low will return to 20 degrees.

Intermittent showers and scattered thunderstorms are also expected this week, possibly in the afternoon.

Shanghai usually enters summer around May 28.