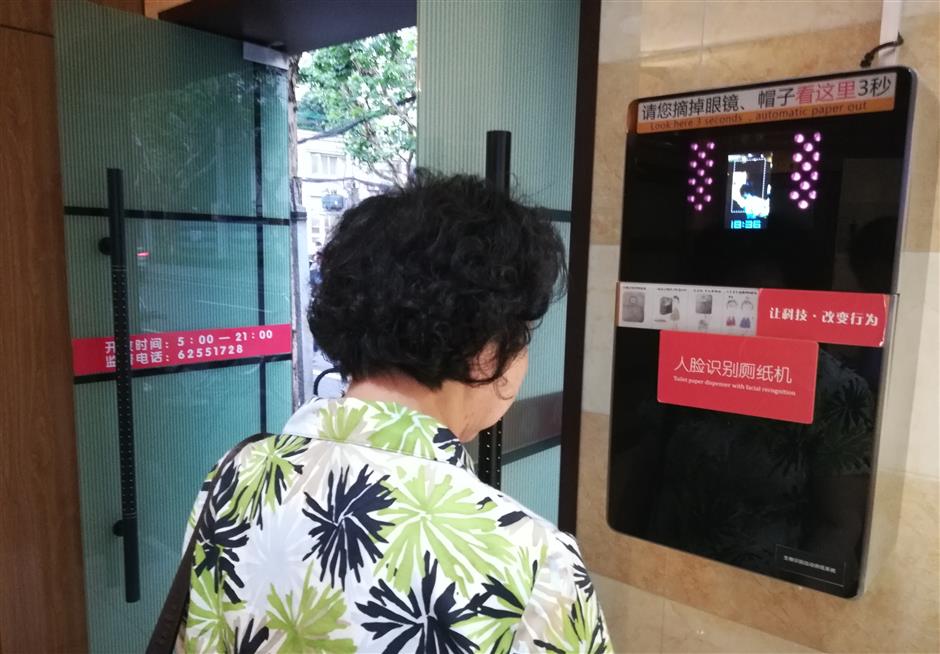 A woman uses a facial recognition machine for toilet paper at a public toilet on Xikang Road in Shanghai.

A facial recognition machine is being used at a public toilet on Xikang Road in Shanghai’s Jing’an District to cut down on the wastage of toilet paper.

The machine, installed at the entrance of a toilet on 326 Xikang Road, rolls out 80-centimeter-long toilet paper — for free — after the scan.

“For most people, 80cm paper should be enough,” said Li Bei, an employee of Shoulian Science and Technology Co, the supplier of the machine. “The face scan machine can save about 70 percent of toilet paper.”

If toilet users need more paper, they can ask for it from the cleaners, who don’t charge for the extra bit of roll.

But the face scan machine cannot be used again for nine minutes.

The machine was installed nearly two months ago at the entrance of the toilet. Initially, people missed it but more people are using it now.

“We are considering making some adjustments because the facial recognition area is 1.8 meters high, which is not convenient for children and even some seniors,” said Li.

He said his company is in talks with the Pudong New Area officials to install its machines in the district.

“The idea is smart, and it can save a lot of paper. It also significantly improves the environment of the toilet as well,” said Li Shufang, a citizen in her 50s.

About 1,500 people use the Xikang Road toilet daily on an average. It has installed sensors to monitor smell and the number of visitors.

Shanghai has more than 2,600 public toilets. Public toilets in eight districts provide free toilet paper, but some toilets in other districts charge a nominal amount, according to Shanghai Public Sanitation and Environment Quality Monitoring Center.

In the beginning, the free toilet paper was placed inside the cubicles, but people would often overuse it. There have also been reports of people walking away with entire rolls of toilet paper, according to Shanghai Yuemin Cleaning and Sanitary Service Co,

An earlier study of a public toilet on Yan’an Road M. showed that, on average, each person roughly used 1.6m of toilet paper per visit.

The situation improved slightly after the toilet paper was removed from the cubicles and kept with staff — so people had to ask for it.

A cleaner at the Xikang Road toilet said some people would use toilet paper for everything — from drying their hands to cleaning their shoes.

Most public toilets that provided free paper started to keep them in public areas, or on the desk of cleaners, or inside drawers with signs on the desk urging against overuse.

Downtown public toilets receive a large number of visitors daily, and the financial burden of free toilet paper is huge, officials have said.

China launched a “toilet revolution” across the country in 2015 with an eye on developing domestic tourism and improving people’s life quality.