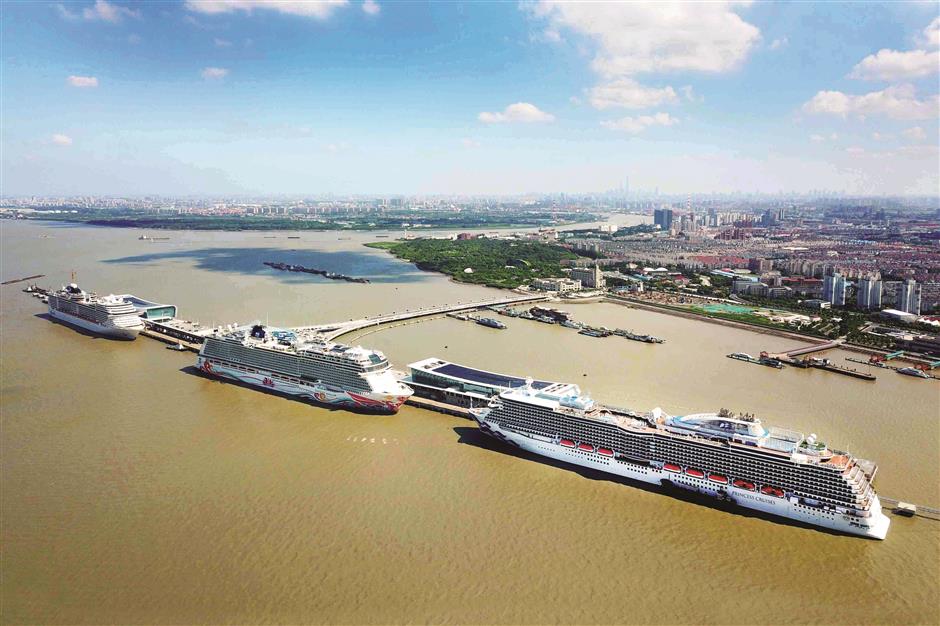 Three of the world's newest luxury cruise liners -- the Majestic Princess, the Norwegian Joy and MSC Splendida -- berth at the Wusongkou terminal simultaneously on July 13, marking the first time that the terminal received three large cruise ships in one day.

Three of the world’s newest luxury cruise liners — the Majestic Princess, the Norwegian Joy and MSC Splendida — berthed at the terminal simultaneously on that day, marking the first time that the Wusongkou terminal received three large cruise ships.

Over 21,000 inbound and outbound passengers witnessed the magnificent sight of the three mammoth ships, around 150,000 tons each, berthed together.

It also made the Wusongkou terminal the first Chinese cruise liner port to receive more than 20,000 passengers in a day, the Baoshan District government said.

The new terminal buildings covering 55,000 square meters will allow the Wusongkou terminal to receive some 6 million passengers annually, more than double the amount of 2017.

A 620-meter-long new approach bridge and a riverside berth covering 82,000 square meters have also been built to boost capacity and services. Extra electric generators have been installed to power the liners while berthed, cutting pollution.

The dock has been extended to 1.6 kilometers along the Yangtze River from the original 770 meters to cater to two cruise liners over 150,000 tons each and another two of over 220,000 tons each at the same time.

“The capacity of the Wusongkou terminal has been doubled with the newly opened facilities, and its services will also reach the world’s top standards for passengers from both home and abroad,” said Su Ping, deputy director of the Baoshan District government.

Shanghai received 59 international cruise liners and more than 80,000 passengers in 2006 when the Costa Allegra became the first holiday cruise liner to dock at the Shanghai Port International Cruise Terminal.

Since the Wusongkou terminal opened in October, 2011, it has become the biggest port for cruise liners in Asia, and overtook Barcelona to become the world’s fourth largest in 2016.

Thanks to the Wusongkou terminal, China is now the second largest cruise liner destination after the United States, by passenger numbers. 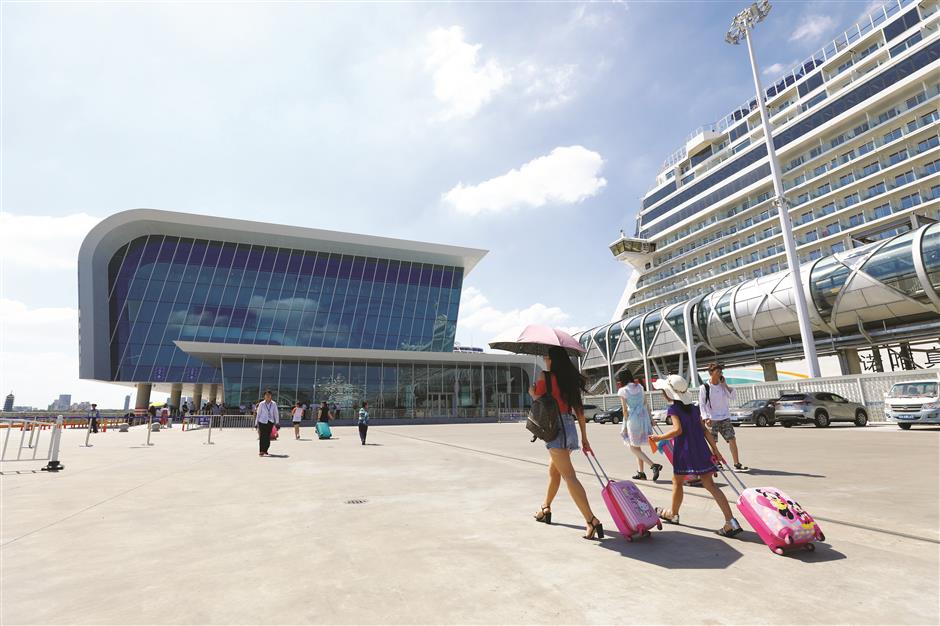 The Baoshan government launched the expansion project in June 2015 with a total investment of nearly 1 billion yuan (US$150 million) to capture the growing demands of domestic cruise liner passengers.

After the opening of the new terminals, the existing terminal building, dubbed the “Oriental Eye” because of its round shape, will undergo a major renovation and be converted into a commercial complex with dining and shopping outlets, said Gu Huiquan, general manager with the Wusongkou International Cruise Liner Port Development Co.

The new buildings, following a similar style, are dubbed the “Scroll on the Sea” because of their long and narrow shape on both sides of the old terminal and have three stories, which include customs, security checks, quarantine, ticket-buying and duty-free shops.

The 2-kilometer Binjiang Boulevard to connect the cruise liner terminal, long-distance bus stations and riverside parks will open by the end of this year.

Construction will start this year to expand Baoyang Road, where the terminal is located, to add an additional vehicle lane to largely relieve the traffic congestion around the terminal, Lei said.

Traffic police will deploy additional officers to guide traffic near Baoyang Road when liners are about to berth , said Song Bin, a police officer with the Baoshan public security bureau.

With the help of big data technology, the police can calculate traffic speed and adjust the traffic lights to prevent congestion, Song said.

About 1,3000 outbound passengers arrived at the terminal on Friday along with over 10,000 vehicles, but no traffic problems were reported, police said. 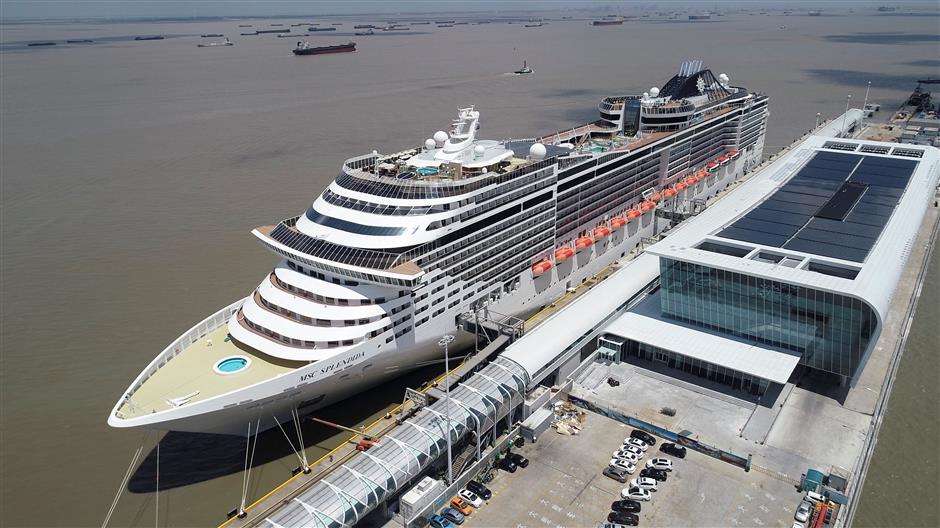 The Wusongkou terminal will showcase the “service” brand, offering high standard and quality services to cruise liners and companies from around the world.

The district has led the establishment of a service league with other Asian Pacific cruise liner ports to optimize its home port functions and improve services.

To better serve domestic passengers, the terminal has been offering shuttle buses to ferry passengers from the city’s Pudong and Hongqiao international airports as well as railway stations to the terminal directly.

To highlight the “manufacturing” brand, the Baoshan government has signed a letter of intent with the China State Shipbuilding Corp, the nation’s largest shipbuilder, and Italian shipbuilder Fincantieri to develop the Shanghai CSSC International Cruise Industrial Park in Baoshan.

Under the scheme, China’s first domestically developed luxury cruise liner is expected to set off on its maiden voyage from Baoshan by 2023.

It will comprise sightseeing tourist offices, a shopping center themed on aerial and marine explorations and a five-star business and leisure hotel.

The terminal has duty free stores covering 554 square meters. They attracted over 150,000 customers in 2017 with total sales revenue of about 120 million yuan (US$10.3 million). More duty free shops are planned within the newly opened terminal buildings to improve the shopping environment.

To boast a “cruise liner culture,” the district has hosted leading world summits and conferences, such as the Seatrade Cruise Asia Pacific Congress. It has also hosted the annual Shanghai Cruise Liner Tourism Festival, which includes a float parade, osmanthus blossoming festival and wedding ceremonies on cruise liners.

The Baoshan government aims to create a world-class “cruise liner riverside cultural belt” based on the Wusongkou terminal to highlight Baoshan’s historical scenery and industrial heritages, Su said. A number of art and recreation sites, museums and art galleries have been planned for the belt. 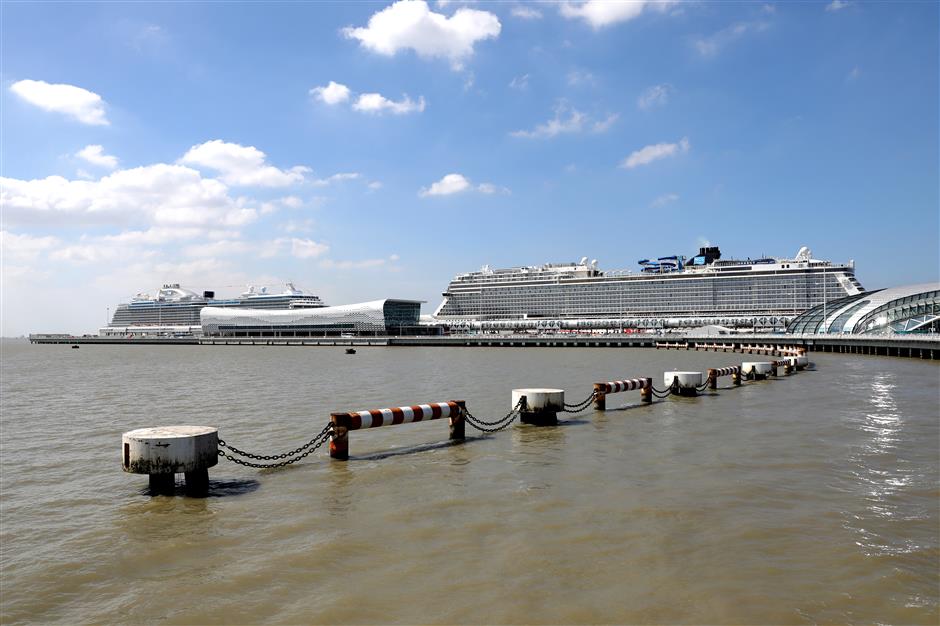