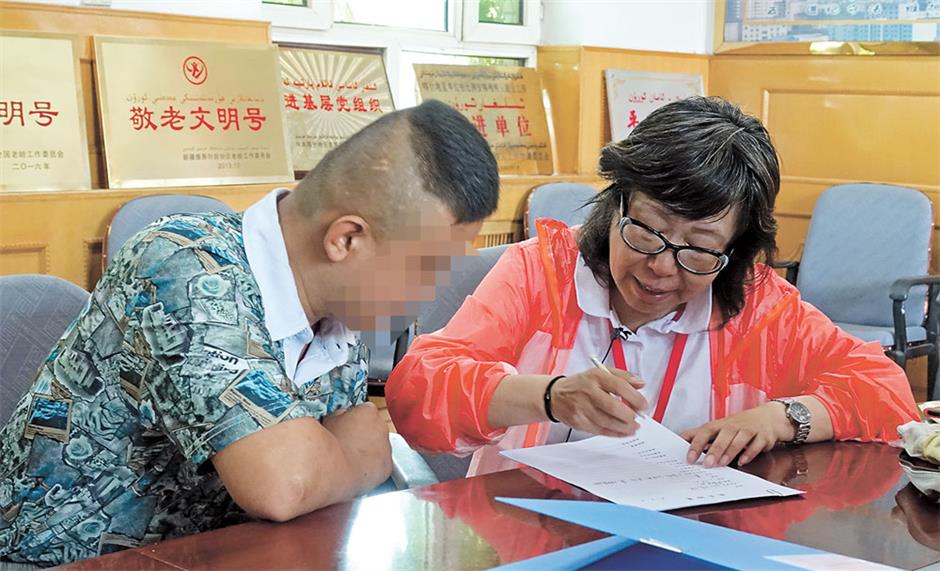 Xu Jinyao, a 69-year-old psychology consultant, works with a patient at the Kashgar Social Welfare Home in Xinjiang. The patient’s face is blurred to protect his privacy.

A Shanghai Daily reporter was part of a journalists’ tour to the Xinjiang Uygur Autonomous Region to see first-hand how the devotion and experience of senior Shanghai volunteers are making a difference in the lives of people there. This is her second report. To read the whole series, go to shine.cn.

Xu Jinyao, a 69-year-old psychology consultant from Shanghai, is working for a second summer at the Kashgar Social Welfare Home, which houses a mix of young and old.

“It is important to read the body language of children, which I call ‘language behind language’,” said Xu. “Some have scarred hearts and are searching for compassion.”

Xu is one of 20 retired professionals from Shanghai working in Xinjiang this summer under a volunteer program that encourages skilled people like her to apply their talents to hardship areas in China’s west.

The group, which ends its two-month stint later this month, is spread across 10 work units in the city of Karamay, the prefecture of Kashgar and the counties of Yecheng, Shache and Bachu.

Xu is part of a contingent of psychologists.

She helps calm angry elderly people, gets mentally retarded youngsters to open up and instills a sense of self-worth in children who lack self-esteem.

She calls herself a “fire captain” because of the frequency with which she is called on for crisis intervention.

“There are many seniors living here, and some are bad-tempered and act like children,” said Zumuret Naimaiti, office director at the home. “When they quarrel or fight, Xu steps in to defuse the situation and often helps them resolve disputes.”

More than 70 people live in the welfare home. Xu drew up a psychological profile of each one on her first visit in 2015. The files are updated by nursing staff trained by her.

Xu uses specially designed games to observe and record the behavior of children. Pictures they draw help her understand what is lacking in their lives. She uses cartoons to convey messages for them to absorb.

“The cartoon pictures are a sort of psychological prescription,” she said.

One resident is a 21-year-old surnamed Ma. He was trafficked as a child and lost contact with his family. At 6, he was left homeless. Today is mentally handicapped.

Ma often cried, telling Xu that he sees his mother in his dreams. In a sense, Xu became a surrogate mother, which calmed Ma. He now helps senior residents in the home and does chores about the place.

She also helped a man in his 70s overcome depression by holding long talks with him.

Xu also organizes shows and encouraged children to give performances. These help build their self-confidence and add a bright note to the home environment.

“They are like my own children,” said Xu, wiping away a tear.

Another psychologist, Ren Guoqian, 63, is working in the Karamay Municipal People’s Hospital this summer, helping people suffering from anxiety and depression.

“The need is great here,” said Ren, who formerly worked at the Hongkou District Commission of Health and Family Planning.

One of her patients is a 44-year-old woman whose mother died when she was 11. Her father remarried six days after the death, and relations with him were frozen for the next 16 years. The patient had three failed marriages, suffered from serious depression and had attempted suicide three times.

“The scars were deep in her heart,” said Ren.

After 10 sessions with Ren, the woman slowly emerged from depression. Her nightmares ceased, and she began to feel positive about life.

“She told me before she left that she would be brave for her two children,” Ren said. “That was a big relief for me.”