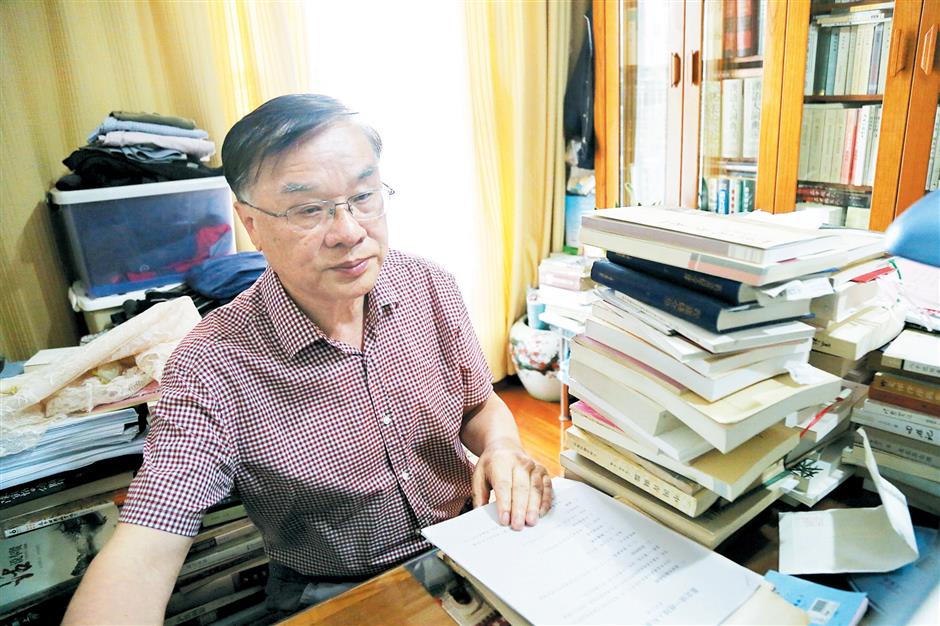 Tao Jiming, an expert in local history, researches at home surrounded by piles of books.

Jiming has become even busier in recent years in Jiading and you can always find him at cultural events in Shanghai. For instance, he was a guest at Shanghai Book Fair on August 17, giving a talk about Jiading diplomats throughout Chinese history.

Though he retired in 2007, he often makes public appearances, most of which involve talks about preserving important historic and cultural heritage in his hometown of Jiading.

As an expert in local history, Tao has never stopped striving to build a better Jiading. Born in 1947 near Jiading’s West Gate, Tao was keen on reading from a young age. With the help of Ding Jingtang, an expert in Lu Xun studies, Tao started to read books systematically, from modern works to history books. That was when he became interested in the Ming (1368-1644) and Qing (1644-1911) dynasties, and then got involved in studying his hometown history.

When working in the Xinhua Bookstore, Tao kept absorbing more knowledge from books in his spare time. After 1976, Tao enrolled in the Chinese literature major of Shanghai Television University to further broaden his horizons.

“Work at daytime. Then read and study after work till midnight,” Tao recalled of his daily routine at the time. He has few hobbies, other than reading, writing and research.

Before Tao graduated from university in 1984, he was transferred to the Jiading culture office engaging in compiling local history, something that changed his life. “Compared with doing business to earn a great fortune which was quite popular during the 1980s, compiling local history was tough work,” Tao recalled. “My friend wanted to partner with me to do business, but I refused. I loved my job, even though it was boring.”

Among all the books, the “Collection of Jiading Tablet Inscription” with its 2.8 million words took Tao 13 years to finish and was approved as the sponsored program of the Shanghai Culture Foundation for its detailed explanation and abundant resources.

The “Collection of Jiading Li Liufang,” which contains the most complete and detailed work of Li, a renowned poet and painter during the Ming Dynasty, won the second prize in the East China area Best Ancient Book competition. His mentor Ding once said: “Tao is the scholar originated from a bookstore.”

The “Collection of Jiading Tablet Inscription” with its 2.8 million words took Tao 13 years to finish. It was approved as the sponsored program of the Shanghai Culture Foundation for its detailed explanation and abundant resources.

There’s an ancient ballad in Jiading that mentions Jiading old town in disparaging terms “Golden Luodian, Silver Nanxiang, Beggar Jiading.” It was an impression that held sway for many years but Tao had his suspicions about it and, in 1977, set about finding out the real meaning behind the phrase.

After collecting a huge amount of historical documents, and doing research, reading local chronicles and applying the tones of the language, Tao finally got his answer. The terms “beggar” and “educated” are both “jiao hua” in Chinese and what the ballad should mean is Jiading is a place with plenty of educated residents and it actually celebrates Jiading’s rich cultural heritage.

Tao published his research in an article “Correct the place name in Jiading” in 1987. Tao’s findings were approved as the true meaning of the ballad, restoring the image of the district at the same time.

When Tao was transferred to Jiading Museum at the age of 53 in 2000, the news that the West Gate old town was going to be torn down to build new buildings was spreading. Tao couldn’t ignore the threat and tried to save these ancient constructions.

Covering 1.5 square kilometers, the West Gate old town was where Tao was born and raised. Plenty of old residencies are located along Xidajie Street including Huguo Temple which is Jiading’s root, Xixi Cottage, former residences of previous diplomats Wu Zonglian and Gu Weijun (also known as Wellington Koo). His view was that if the area was reconstructed, Jiading would become a place with no roots.

Tao drafted a letter on protection and restoration of Xidajie Street former residences of celebrities. After receiving his letter, the officials paid high attention to this issue. Even then, Tao kept calling for the area’s preservation on discussion forums. He also noted that to protect and restore this old street had to be resolved as soon as possible.

Finally, thanks to Tao’s efforts and the district’s attention, Xidajie Street was saved and is now a conservation area. The project to restore the area has begun, including rebuilding Huguo Temple and the repair of celebrities’ former residences.

Also, credit for the launch of the Jiading Bamboo Carving Museum, the district’s new cultural landmark, goes to Tao. It was Tao who proposed building such a museum to bring the local bamboo relics to light, letting more people witness its charm.

“I was born in Jiading and my ancestors were born and raised here. I love everything in the district and wish it will become more prosperous,” he said.