Rural 'Grandma Moses' captures the life of the countryside on canvas 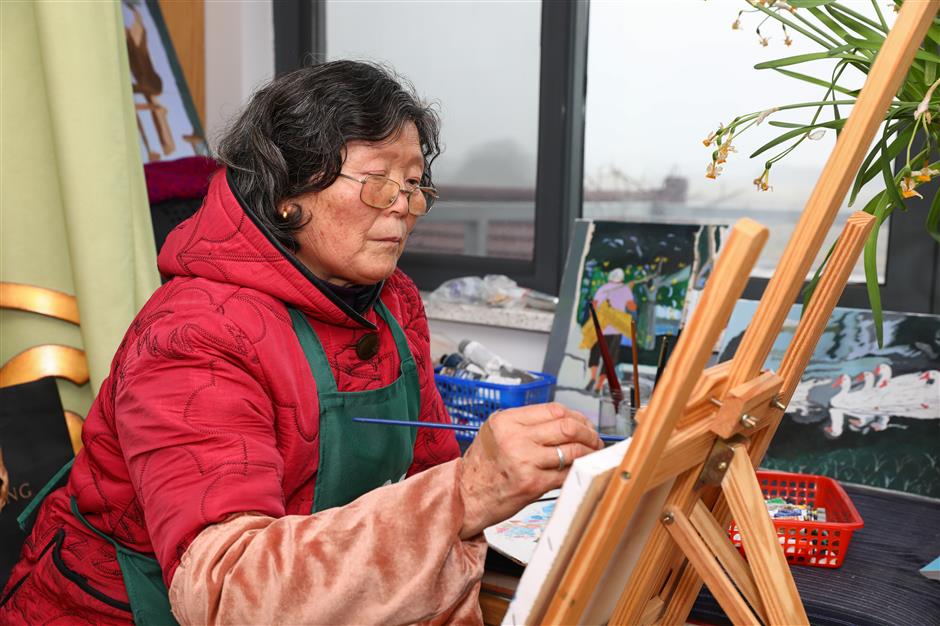 Xu Fengying is painting at the “workshop” corner in her bedroom.

Many of us wishing to embark on a new life are held back by fear of failure. Not so Xu Fengying, who put down her hoe in the Qingpu District countryside and took up painting when she was 70.

She is called by some China’s “Grandma Moses,” a reference to the American folk artist who began painting in earnest at age 78. Xu, now 73, paints rural scenes and an inner world full of imagination. She has become a wanghong, or “Internet celebrity.”

Flowers, farmland, rivers, county houses, birds, local folk. She creates a story for each of them on canvas. Her works are exhibited in her hometown in Qingpu.

Grandma Moses, who was adept at needlework, turned to painting after developing arthritis that made embroidery painful. Likewise, health motivated Grandma Xu to turn to painting.

She underwent surgery for rectal cancer in 2015. Instead of a recuperation of rest, she continued to work in the fields, which caused the surgical wound to rupture and require a second surgery.

Her daughter and son-in-law then stepped in to prevent her from doing any more farm work. She was prodded to take up a less strenuous pastime, like singing. Xu instead chose painting.

Xu knew next to nothing about art except what she gleaned from a daughter who works in traditional Chinese paintings.

"Traditional Chinese painting was too challenging for someone like her with no formal training," her daughter Chen Junfang told Shanghai Daily. "By contrast, oil painting is friendlier to beginners, who can view it initially as 'filling in color.’”

Chen added, "She has always been a person who loves life and was adept at needlework, even during the hardest periods. Although our family was very poor, I can still recall from childhood that my mother often embroidered tiny flowers or animals on items like my school bags."

Chen invited one of her artist friends to teach her mother oil painting. Grandma Xu learned how to draw grids on canvas, decide what things went where, mix colors and paint layer by layer.

Her first work was a sketch of surrounding farmlands from her window on the third floor of their house. It had a potted bougainvillea in the left corner of the window.

It was a rough beginning. After she completed the painting, her instructor scraped the canvas clean, saying the colors and dimensions were wrong.

"I burst into tears when my work disappeared,” Xu said. “The teacher told me to try again, but my second attempt was equally bad. I cried, and the teacher asked if I truly wanted to learn painting. I said yes and had a third try."

After a rocky start, Xu began to gain confidence by copying the works of art masters. She tried all different styles of oil painting and found the one she liked most was that of French post-impressionist Henri Rousseau. As her skills improved, she sometimes added her own touches to copied works.

Every artist has a muse, and Xu searched her soul to find hers. She began creating her own works, mostly focused on rural life. She set up a corner of her room by the window as her “studio,” and placed her easel there. Sometimes when an idea popped into her head, she would grab her sketchbook and draw in bed.

"When I was diagnosed with cancer, I thought that maybe I was not far from death and it worried me,” Xu told Shanghai Daily. “But now I never think of it anymore. Painting makes me alive."

"When you knit a sweater, you knit with one needle after another,” she said. “Likewise, an oil painting requires you to paint one layer after another. Knitting becomes very easy when you get the hang of it, and so is painting.”

Her daughter founded a cultural center in their village, which has attracted many artists to the area. For Xu, it was an opportunity to tap the expertise of others.

"My mom is always asking the artists questions,” said her daughter. “Once when she was baffled by how to draw the wrinkles on red dates, she asked sculptor Yang Dongbai for help. Yang told her to examine a red date very closely before trying to paint it. Another time, when she saw a painting of Taihu Lake stone by artists Wang Lei, she found the color of the stone beautiful and asked him how to mix it."

The same might be said of Grandma Xu, whose paintings often capture rural scenes that are slowly disappearing.

"In one of my works, there is a dam that has since been demolished,” she said. “I want to preserve scenes in my paintings."

Whenever she sees scenes she wants to paint, Xu askes her daughter or son-in-law to take pictures of them with their cellphones.

"Scenes like my neighbors drying their grains and firewood, and farmers collecting mushrooms are glimpses of life that I want to paint,” she said. “And I want to paint all the houses in our village."

Xu has been an inspiration to other villagers, who have expressed an interest in learning how to paint. With the help of her daughter, Xu plans to give free courses at the cultural center.

"As long as they are willing to learn, I'll be always ready to teach them," she said.

Grandma Xu feels the same way. It’s not a matter of formal art education, she said. It’s a matter of passion and love for art.

Grandma Moses painted more than 1,500 canvases before dying at age 101. If parallels are anything to go by, Grandma Xu has plenty more paintings yet to come.

"I'll just keep on painting,” she said. “I could never give it up.” 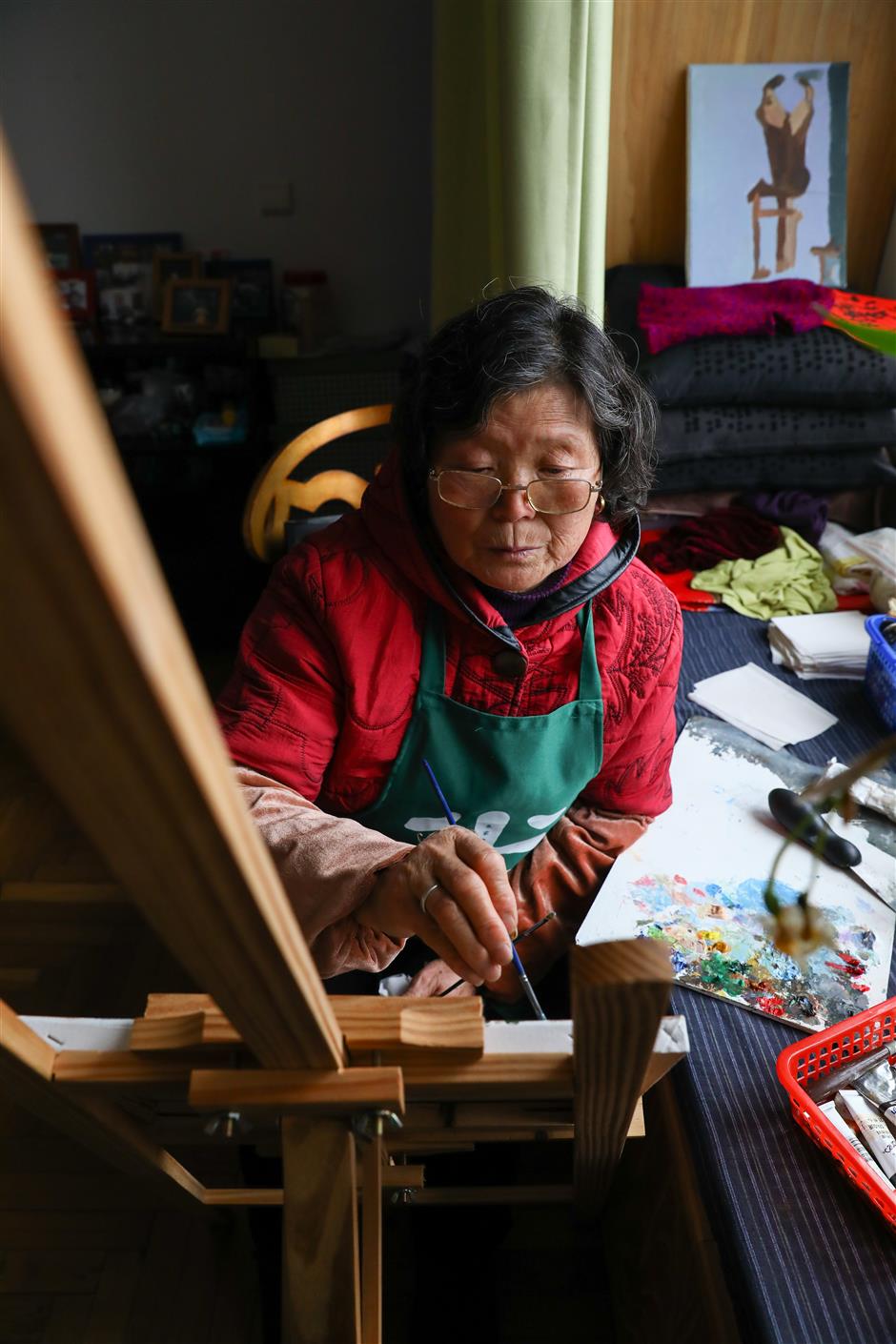 Xu Fengying is painting at the “workshop” corner in her bedroom. 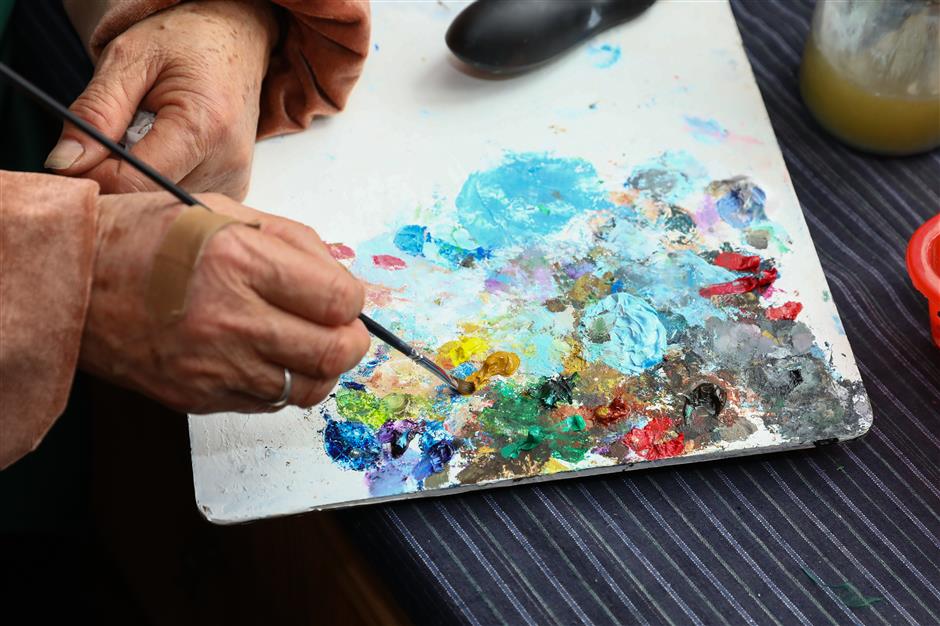 Her daughter said Xu is a thrifty person who is unwilling to buy expensive oil paint. So sometimes the family would buy some good oil paint for her and cheated her that the paint was given by others as a gift. 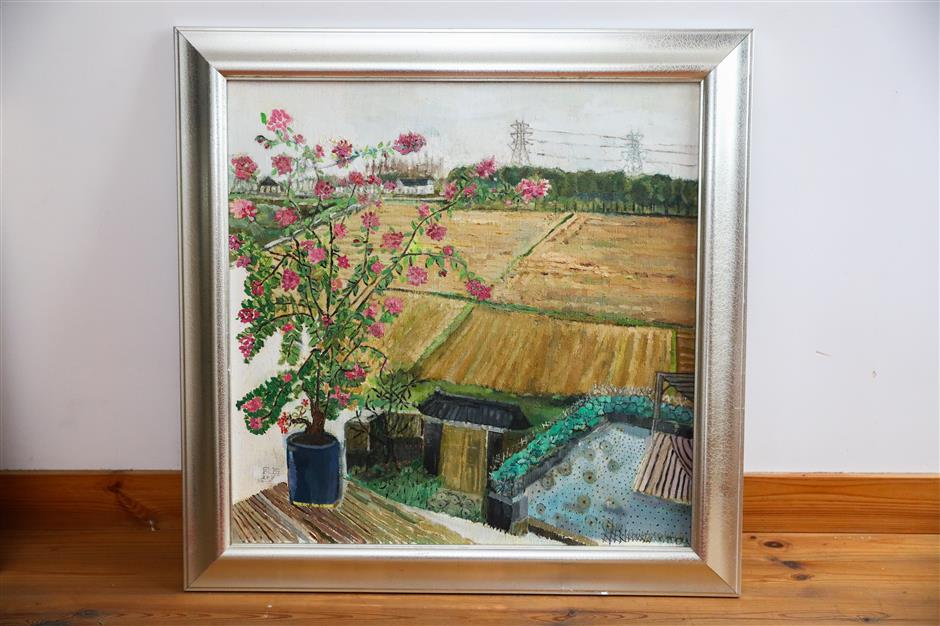 Xu's first work was a sketch of surrounding farmlands from her window on the third floor of their house. It had a potted bougainvillea in the left corner of the window.