Best path to the future is along a greenway 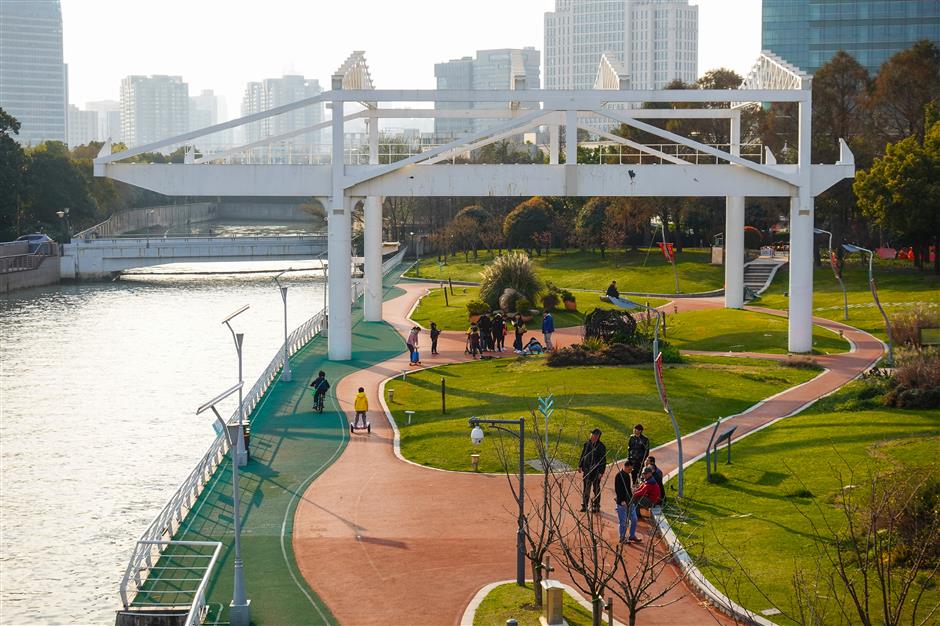 The Huangpu River greenway, known as the "No. 1 municipal greenway," stretches 8.3 kilometers and comprises walking, jogging and cycling tracks. By 2035, Shanghai will have 2,000 kilometers of greenway.

There are always people walking or jogging along the banks of the Huangpu River these days.

The mild spring breezes and twittering birds attract people from all over Shanghai, whether to photograph flowers, take some serious exercise or simply immerse themselves in a little oasis of urban tranquility.

The riverfront Huangpu River greenway, known as the “No. 1 municipal greenway,” stretching 8.3 kilometers through Huangpu District with walking, jogging and cycling tracks, has become a popular getaway for residents and tourists.

“The area was once nothing but stones and weeds. Now, it is such a beautiful place and full of life,” said Jiang Liping who lives in a nearby residential complex.

“I come here almost every day with my grandson when the weather is fine. We love the cherry blossoms and magnolia. We walked more than 2 kilometers today and saw many different kinds of birds.” 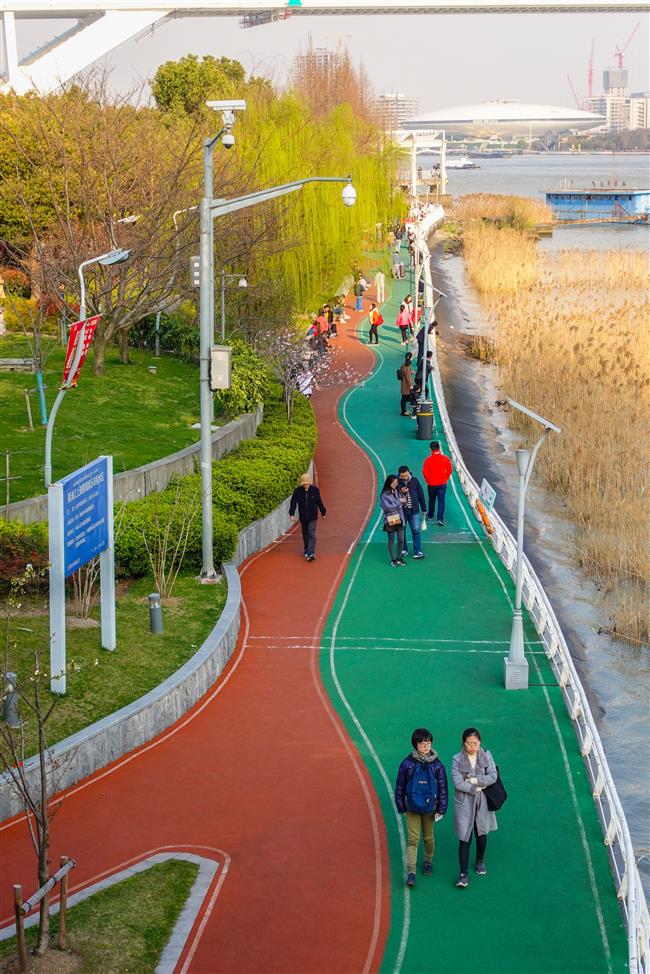 Greenway is ecological space with environmental, health and leisure functions. It is comprised of gardens, forest, water courses, roads and boulevards, according to the Shanghai Greenery and Public Sanitation Bureau.

It makes the best use of existing resources and links parks, forests, wetlands and historic areas, villages and residential blocks.

The No. 1 greenway is located on the former World Expo 2010 site on the western side of the Huangpu River, an area closed after the Expo ended.

“When planning and building the park, we wanted to return the beauty of the river and the riverbank to residents,” said Zhu Xiaojun, director of the planning and construction department of the Huangpu District Greenery Management Station. “We want the people to get closer to our mother river.”

Liu Dingliang has lived in the neighborhood for more than 10 years.

“I used to have to jog on the streets,” he said. “The area was derelict for a long time after the Expo finished. It was quite spooky at night with all the unoccupied pavilions. The place has improved a lot.

“I once walked more than 20,000 steps, just out of curiosity to see where the greenway leads to.

“I am much happier living here now thanks to the pleasant environment.”

Creative use of colors and materials are key to the atmosphere in the park. Permeable asphalt in different colors has been used for the jogging, cycling and walking tracks. There are 10 themed gardens include azalea, rock and herb. Cherries, lilies, golden rain and ginkgo trees provide a constantly changing natural kaleidoscope throughout the year.

“The greenway is designed to appeal to visitors through all four seasons,” said Zhu. “The Huangpu District section has the richest variety of plant life of all the 45-kilometer riverfront. One single rock garden has nearly 200 varieties of plants.

“In spring, there are cherry blossom and tulips. In summer, the area is a purple sea of flowers with bigleaf hydrangea in full bloom. In autumn and winter, there are chrysanthemums and ornamental grasses.”

Walkers and joggers get some fresh air on the Huangpu River greenway.

They all have rainwater collection and recycling systems, and a lot of thought has gone into attracting as many species of birds as possible. Each design reflects some aspect of the personality of the area.

“The Huangpu River has a rich history and culture,” said Zhu. “We want to preserve that, and also to make our own mark and add something new. We have used some completely novel concepts in our designs.”

The Secret Garden will feature herbs traditionally used in Chinese medicine because it is located close to a former TCM warehouse. TCM sounds mysterious to many people and is often thought of as a kind of “secret,” said Zhu.

The Tranquil Garden features an arbor because it was once a lumber yard.

The Sky Garden will be atop the highest point in the greenway.

The park is lit up at night and has ample toilets with 24-hour hot water and a free shower area.

“Our greenway is not just a public service, but a force for unity in the culture and memory of the city,” said Fang Yan, deputy director of the greenery bureau.

“It is not easy to do what we are trying to do in a metropolis like Shanghai, particularly in downtown areas which lack space and resources, but we try to use existing resources whenever possible.” 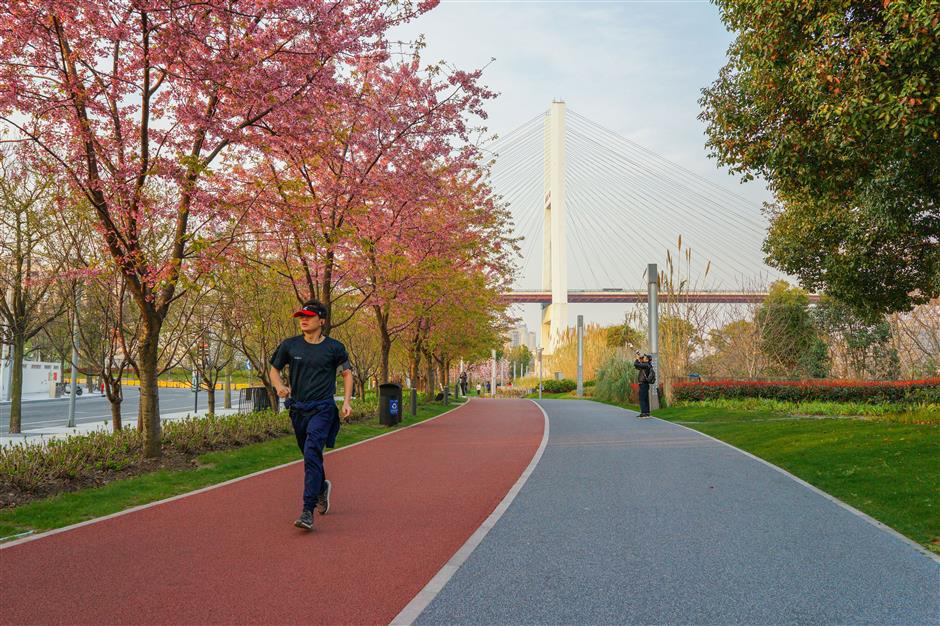 About 200 kilometers of greenway has been opened up every year since 2015. By 2035, 2,000 kilometers will form a complete network spread across the entire city at municipal, district and community levels.

There is currently about 100 kilometers of city-level greenway, usually no more than 30 meters wide downtown but extending to 100 meters in the suburbs.

This is supplemented by about 200 kilometers at district level and up to 400 kilometers of community land mainly along existing roads. They link residential complexes, parks, cultural, sports and commercial facilities, community centers, Metro stations and other areas, said Yang Jiarong, deputy director of the park and greenery land department of the bureau.

They play a frontline role in creating a genuine urban ecosystem and increasing biodiversity.

While the concept of the entire municipal greenway is unified under a single logo, local areas are encouraged to develop their own specific identities, through distinctive foliage, flowers, colors and functions, said Zhang Yingping, deputy director of the planning and development department of the bureau.

A cherry blossom greenway can be found at the Pengyuepu River section of Wenshui and Lingshi roads in Jing’an District, while plum blossom is more prominent on Laohumin Road in Minhang District.

The Fengxiang Road section in Baoshan District is covered by Wi-Fi, and there is a fluorescent jogging track in Minhang. There is no shortage of garbage bins, lighting, benches, rest stations and environment-monitoring stations, and the pathways themselves are paved with environmentally friendly permeable materials.

Minhang District has built 114 kilometers of greenway, with a target of 200 kilometers by 2020. The design of the greenway incorporates a “paper-cut” landscape echoing the intangible cultural heritage of Zhuanqiao Town in the district.

The 3-kilometer Zhayin Road greenway will form a giant circle when finished. Residents have nothing but praise.

“We come here almost every day, walking from one side to the other, taking 6,000 to 7,000 steps daily,” said a retiree surnamed Huang on his daily constitutional with his wife. “It’s a good practical project for residents and improves the area and our health significantly.”