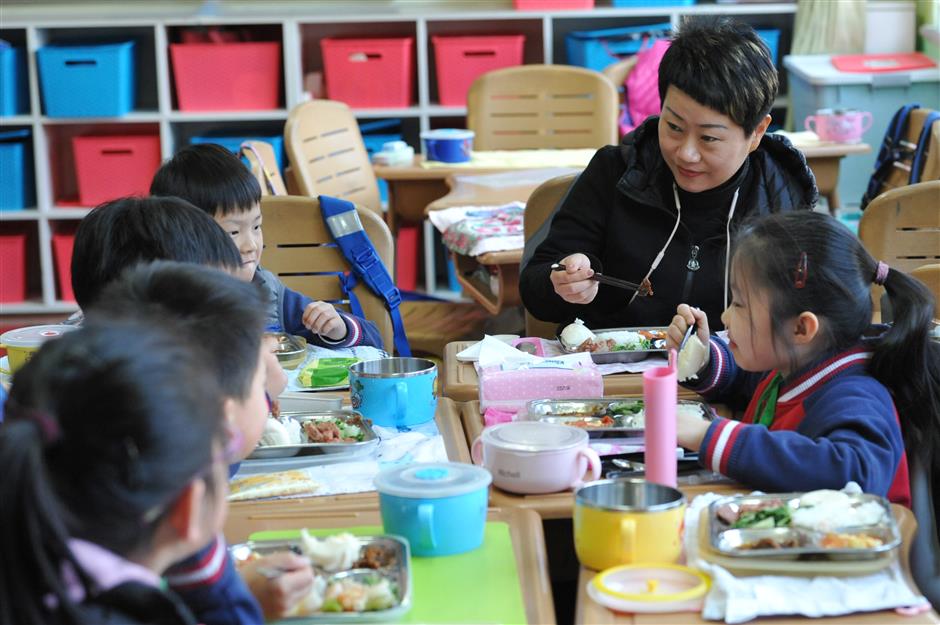 An administrator at Tianshan No. 1 Primary School in Changning District talks to students as they have lunch together.

Administrative staff, including principals, are having lunch with students at a number of local schools after a nationwide regulation came into effect on Monday.

Li Aiming, vice principal of Jianping Lingang Primary School, sat down in a Grade-5 class at noon, eating the same food as the students and talking to them about it.

All seven top administrators in the school in the Pudong New Area, including the principal and Li, will take turns to eat with students.

The regulation released last month by China’s Ministry of Education is aimed at enhancing food safety, as well as managing the health and nutrition of students.

Measures listed in the regulation include one that requires persons in charge of schools and kindergartens to dine with students for each meal provided on campus.

As many schools in Shanghai have limited space and students have lunch in classrooms, the principals now go into classrooms to comply with the new rule.

“We were aware of the regulation and trialed it in some classes last month,” Li said. “From this month, we will officially follow the timetables worked out by the general affairs office to ensure that each day we will have one of the seven administrators eating in a classroom. We have 21 classes, so each class will see one of us, once a month.”

Li said head teachers had been having lunch with students in their classrooms since the school was established nine years ago and the practice will continue.

He said the food was the same for students and teachers, and cooked in the same kitchen. Teachers, however, usually have larger portions, according to Li.

He said the school’s food came from approved suppliers and was easily traceable.

“Food security and the health of children are top priorities in our school,” he said. “We insist on using vegetables in season and have never used genetically modified foods.”

Xu Wen, the school’s principal, said they are conducting a survey among students and parents to determine the most popular foods while keeping the dishes healthy. 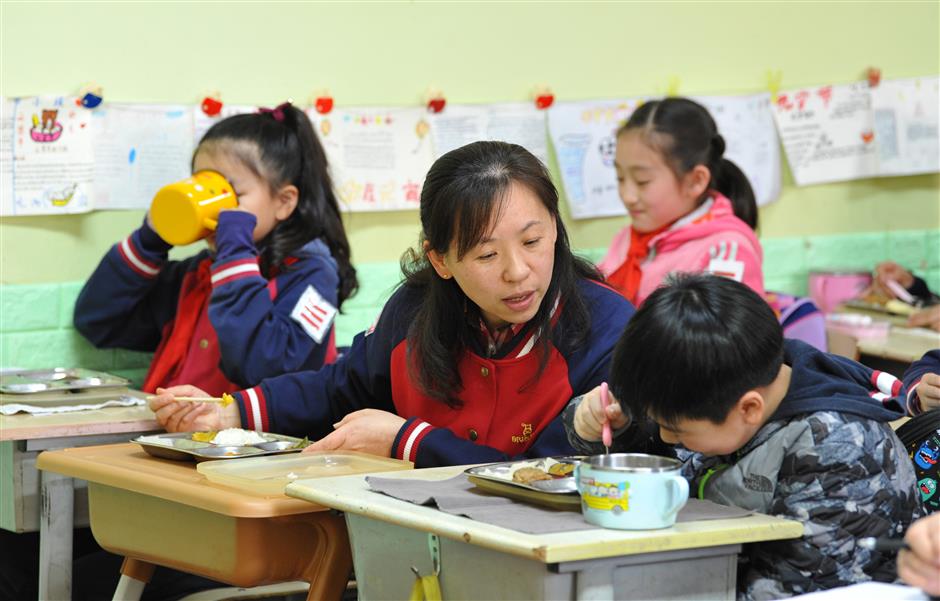 Shen Juan, Party secretary of Tianshan No. 1 Primary School, has her lunch alongside students.

At Tianshan No. 1 Primary School in Changning District, five of its 14 administrators were having lunch with students yesterday. Two head teachers also joined the project.

Previously, administrators and teachers had lunch in the faculty’s canteen. Head teachers usually have lunch before students so that they can be in the classrooms to help distribute food and remind students about good manners, and deal with any emergent situation.

The food was the same for teachers and students, but cooking methods could vary as adults and children have different tastes.

Shen Juan, Party secretary of the school, said its administrators and head teachers will take turns to dine in classrooms with students.

She said the change would not be a problem for the school as they initiated similar practices two years ago under a program launched by the district education bureau that required principals to dine with students once or twice a semester. The bureau director also made unannounced visits to local schools from time to time to have lunch with students, inspect the food and listen to students’ views.

The school also held surveys to gauge the views of parents, Shen said. There had been some misunderstandings about school meals, she added.

“We received a call from a grandfather who said there were worms in the soup his grandson had that day,” she said. “As we did not dine with students at that time, we did not know what had happened. After we investigated the kitchen and the menu, we found that the boy had mistaken the whitebait in the soup for worms.”

After that, the principal sat with students at lunch from time to time to get to know what they were eating and hear their opinions directly.

The school also displays menus on its website and via campus radio broadcasts, with information about ingredients and nutrition.

Shen said she was glad to see students looking out for each other in choosing meals. One day, a girl in the third grade got a meal with shrimp, but she was allergic to it. Her classmate who got a meal with pork exchanged with her.

“Lunch can go beyond food to cultivate virtues too,” Shen said.

The school also invites parents to lunch once a semester and to visit and inspect where the food is produced.

“The parents get to see how the food is made,” said Shen. “They can check the date and food packaging by themselves.” 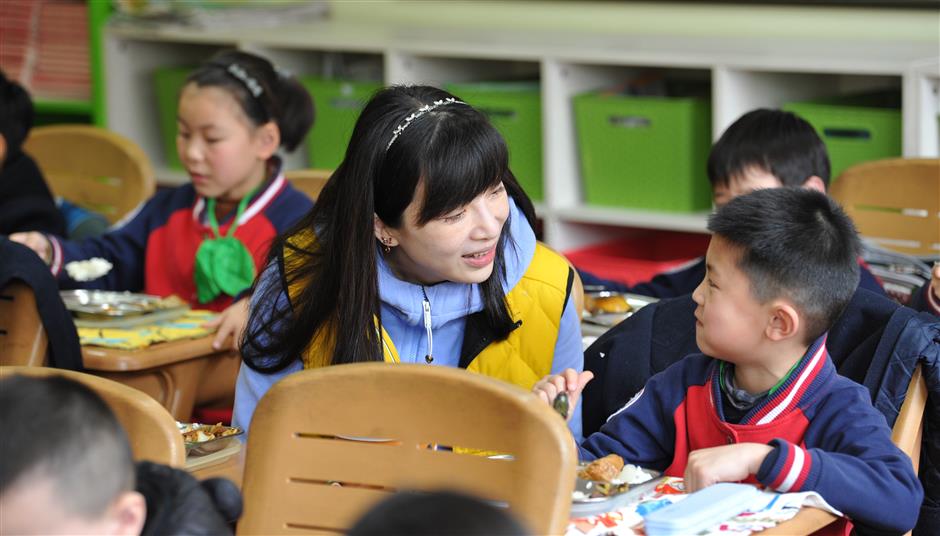 Lu Huaqiong, principal of Tianshan No. 1 Primary School, has lunch with students.

As the new regulation also encourages schools to get parents involved in the “dining together” project, Shen said they will increase the frequency for selected parents to have lunch with students at classrooms to once a month.

Shen said such changes paid off and satisfaction with lunches had improved in the past two years.

“Previously, many grandparents would bring bread or yoghurt when they came to pick up children,” she said. “But now such things are rarely seen as students eat up the meals and will not feel hungry when school is over.”

Parents said they are more assured after knowing principals are having the same food as the students.

“My daughter’s school has never been exposed to food security problems, but I think the suppliers and the chefs will be more careful in preparing the meals when principals have the same meals with children,” said Grace Gao, a mother of a first-grade student in Changning.

More schools are preparing to comply with the ministry’s regulation.

He Xuefeng, principal of Minhang Experimental Primary School, said he and other administrators will take turns to have lunch with students in classrooms from today on all its four campuses.

“We will also talk to parents and the local education authority to raise the spending on lunch for each student, which has been 12 yuan (US$1.78) for many years despite inflation, to provide more options and raise the quality of lunch for children,” he said.