Restoring dignity to the dead

For 42-year-old Wang Gang, retaining the dignity of people after death is a solemn promise.

Wang, a mortician at Longhua Parlor in Xuhui District, is a real-life version of the main character in the 2008 Japanese movie “Departures,” the story of a man who prepares the dead for their final resting place.

Wang, who has followed his calling for 22 years, is considered a master in his field and earned the title of “Shanghai Standout,” a Shanghai Federation of Trade Unions project to honor workers whose expertise, professionalism and spirit are a credit to the city.

“It is my wish to make people leave the world with utmost dignity and make them look as alive as possible,” Wang said before the Qingming Festival, or tomb-sweeping day, which falls on Friday this year. “I want to soothe the sorrow of their families when they bid farewell to their beloved ones.”

Wang began working at the parlor, which takes in nearly 30,000 bodies every year, when he was 20 because his mother worked there. He was the youngest mortician.

“I visited the parlor with my mother many times when I was a child, but I still felt some kind of discomfort at first,” said Wang.

Some of the bodies he prepares arrive in a poor condition after traffic accidents, falls from high buildings, fires and drowning.

“Many people think it is a simple job, but it is not,” said Wang. “We need to grasp a lot of knowledge such as people’s body structure, organ structure and material use, and we need to observe photos and keep communicating with the deceased’s relatives to learn about their life experiences, which helps us restore the broken bodies.”

Wang has been asked to restore the appearance of victims in a number of accidents, including the Bund stampede, the Eastern Star capsizing, the Jinshan District helicopter crash and the Tianjin Port blast. In these incidents, the faces of many of the victims were unrecognizable, posing great challenges for Wang and his team.

Wang and two colleagues went to Tianjin after the 2015 explosion in which 165 people died.

“I was deeply sorrowful when seeing the bodies because most victims were teenage,” he recalled. “Cries filled the scene and the parking lot was full of unrecognizable bodies.”

“The emotions of families and firefighters created a lot of pressure on me, and I wanted to try my best to fulfill their expectations — restoring the utmost dignity of the dead.”

Time was of the essence and Wang worked 16 hours a day for more than 20 days.

In the case of one 19-year-old victim, a firefighter, it took more than 10 hours to reconstruct the body. Wang carefully cleaned the body, stitched pieces together one by one and finally restored the face. He even made the four moles and acne that had been on the man's face.

“He is Xi Zi, my brother,” said a fellow firefighter after seeing the restored body.

“I needed to be at the scene of every memorial meeting and could only take a nap after that,” Wang said.

“Some bodies were in pieces and I needed to lie on the bodies to model their faces,” he said, sometimes being in that position for hours. “Only when my eyes glazed over did I take a short rest and have a drink of water.”

A woman, in tears, told him: "Thank you for returning my son to me and enabling me to see his face for the last time.” 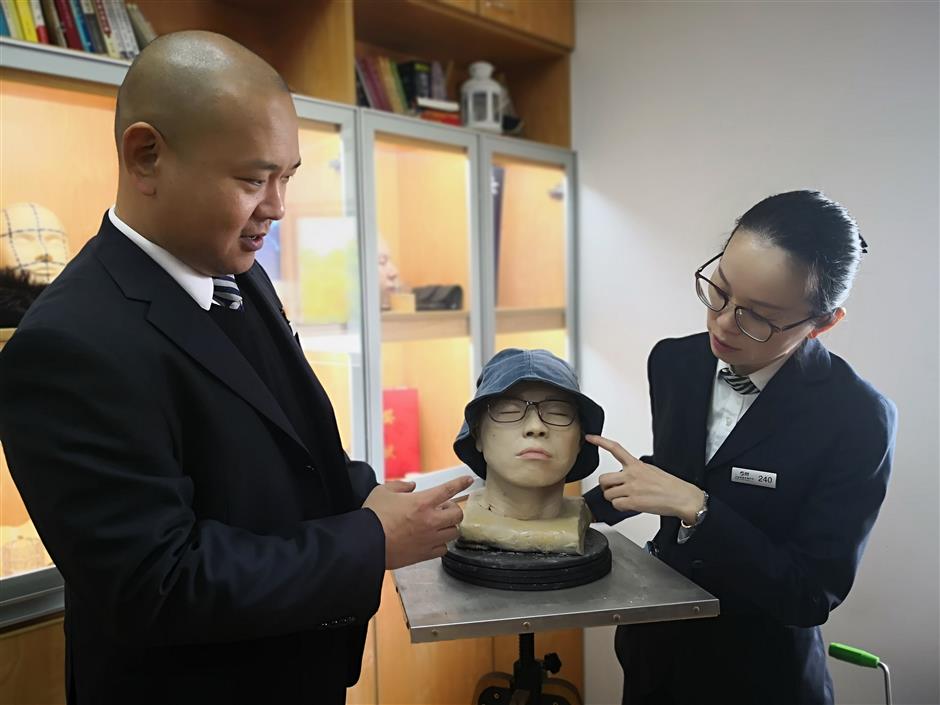 Wang Gang (left) discusses with a colleague the features of a face model he made.

Wang said that when he first entered the industry, he had been disappointed to find technology lagging behind. “The early corpse restoration was just skin sewing and infilling to ensure the completeness of bodies, which should be better.”

In an accident where an 8-year-old girl fell from the 19th floor, her head was shattered. Wang used the thinnest of needles to conceal the injuries, but the effect was not good.

“I burst into tears when seeing the mother hugging the body of the girl and touching every inch of the sewn parts on her face,” recalled Wang.

After that experience, he began to explore various technologies and skills that would restore skin, muscle, hair and blood vessels. His rooms were filled with models of skulls, body structure charts, books and materials. He went to Shanghai Medical College at Fudan University in his free time to increase his knowledge.

“I don’t get tired because helping others and accompanying the last part of life of the deceased is meaningful,” he said.

He also spent six months in Canada learning about cosmetic surgery and how to protect bodies from decay.

In one case, Wang spent four hours observing the texture, glossiness and color of skin from the photo of a victim in a car accident and used steel supports to fix and connect skull bones. He was successful in restoring the person’s face.

Corpses in water for a long time and burned bodies are deemed the most difficult to restore. Drowned bodies can be badly swollen, and Wang developed a reagent which helps restore skin to its original state.

In another case, Wang spent eight hours grafting eyebrows on a burned body from a traffic accident based on photos, observing the deepness and direction of the eyebrows carefully to make the face look as alive as possible.

His cosmetics case has nearly 30 types of facial toners.

“When the faces of the deceased turn black, yellow or purple, we need the brown color to smooth it to make it look like normal person,” he said.

Bodies are very sensitive to temperature and humidity, said Wang.

“For me, every corpse is alive,” he said. “The color changes under different temperatures and liquid can ooze from corpses in different environments.”

After an accident in which 14 bus passengers died, it was a race against time as the humid and warm weather caused problems.

Wang didn’t rest for days as he worked, restoring even the facial expressions of the deceased.

In 2016, Wang established China’s first 3D printing workshop for the repair of damaged bodies. Via scanning, 3D modeling, layer processing, hair grafting and makeup, the technology can restore over 95 percent of the faces of the deceased.

He has also designed funerals to soothe the sorrow of families to the minimum. For the funeral of a 3-year-old child who died in a traffic accident, his team created a scene filled with flowers, toys, lights and even a small bed, recalling only the happy part of the child’s life.

His pursuit of perfection is endless.

“Wang is a master in the industry, but he never stops learning,” said Qiao Zheng, one of Wang’s colleagues. “He keeps developing new technologies.”